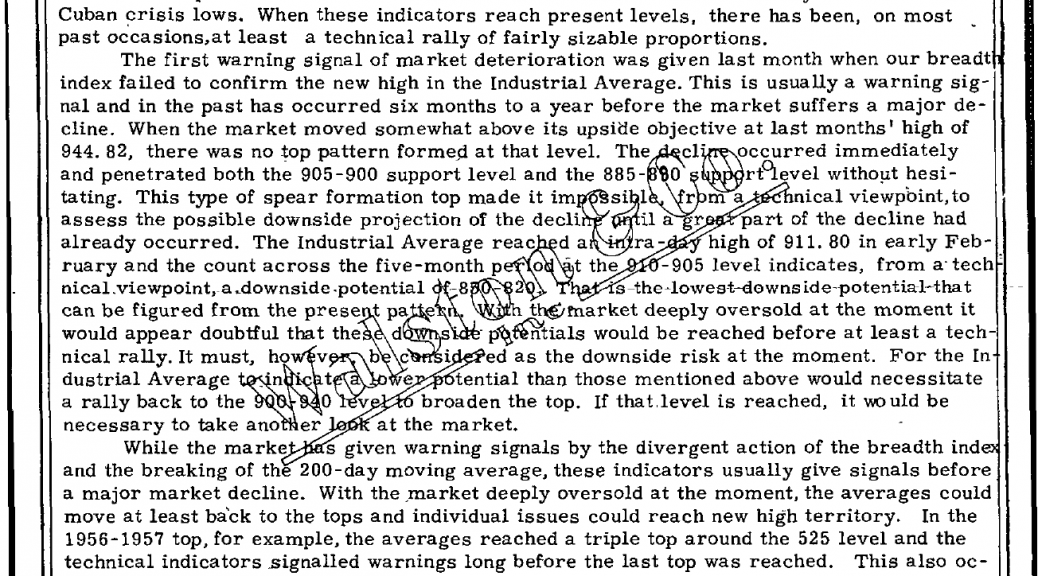 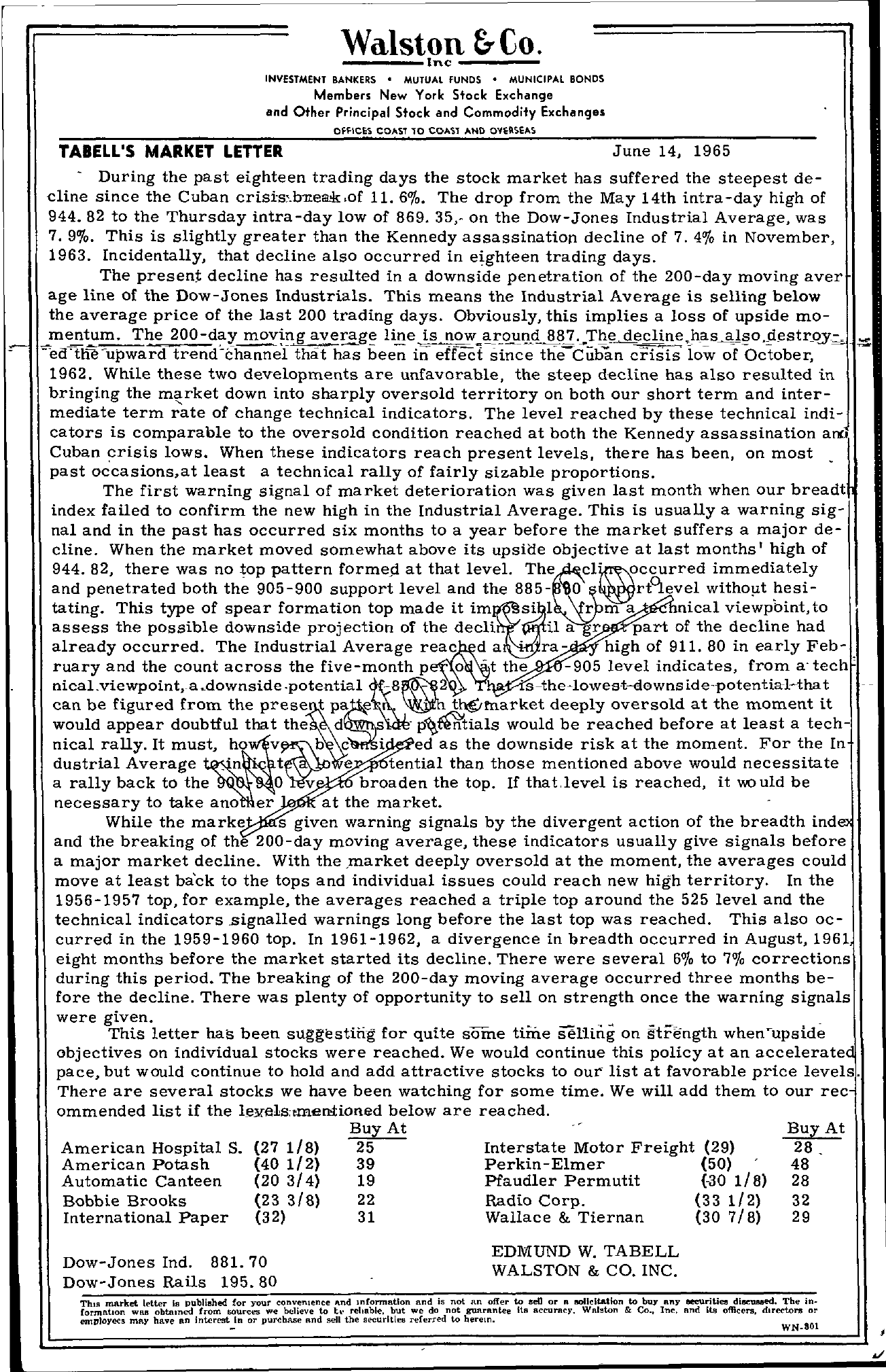 W—-a–l-s–tIonnc–&—C–o–. INVESTMENT BANKERS MUTUAL FUNDS MUNICIPAL BONDS Members New York Stock Exchange and Other Principal Stock and Commodity Exchanges Of-fleES COASl 10 CO'Sl AND OnflSeAS TABELL'S MARKET LETTER June 14, 1965 – During the past eighteen trading days the stock market has suffered the steepest de- cline since the Cuban 11. 6. The drop from the May 14th intra-day high of 944.82 to the Thursday intra-day low of 869.35,- on the Dow-Jones Industrial Average, was 7.9. This is slightly greater than the Kennedy assassination decline of 7.4 in November, 1963. Incidentally, that decline also occurred in eighteen trading days. The present decline has resulted in a downside penetration of the 200-day moving aver age line of the Dow-Jones Industrials. This means the Industrial Average is selling below the average price of the last 200 trading days. Obviously, this implies a loss of upside mo- mentum. The 200-day line is 887 decline,has ed'me-upward trendCchannel that has been in effect since the-Cuban crisis low of October, 1962. While these two developments are unfavorable, the steep d cline has also resulted in bringing the m,!rket down into sharply oversold territory on both our short term and inter- mediate term rate of change technical indicators. The level reached by these technical indi- cators is comparable to the oversold condition reached at both the Kennedy assassination am Cuban crisis lows. When these indicators reach present levels. there has been. on most past occasions,at least a technical rally of fairly sizable proportions. The first warning signal of market deterioration was given last month when our breadt index failed to confirm the new high in the Industrial Average. This is usually a warning sig- nal and in the past has occurred six months to a year before the market suffers a major de- cline, When the market moved somewhat above its upside objective at last months I high of 944.82, there was no top pattern at that level. immediately and penetrated both the 905-900 support level and the 885- 0 witho!lt hesi- tating. This type of spear formation top made it 1 r ma nical viewpoint, to assess the possible downside projection of the decli il a r part of the decline had already occurred. The Industrial Average d a . ra- high of 911. 80 in early Feb- ruary and the count across the five-month p 0 -t the -905 level indicates, from a' tech' nical,viewpointra.downside ,potential . .s-the-lowest-eowns t can be figured from the would appear doubtful that the d s deeply oversold at the moment it would be reached before at least a tech- nical rally. It ho dustrial Average .'n' t c i ed as the downside risk at the moment. For the In e tential than those mentioned above would necessitate a rally back to the 0v broaden the top. If that.level is reached, it would be necessary to take ano er at the market. . While the marke s given warning signals by the divergent action of the breadth ind and the breaking of the 200-day moving average, these indicators usually give signals before a major market decline. With the .market deeply oversold at the moment, the averages could move at least ba'ck to the tops and individual issues could reach new high territory. In the 1956-1957 top, for example, the averages reached a triple top around the 525 level and the technical indicators .signalled warnings long before the last top was reached. This also oc- curred in the 1959-1960 top. In 1961-1962, a divergence in breadth occurred in August, 1961 eight months before the market started its decline. There were several 60/0 to 7 corrections during this period. The breaking of the 200-day moving average occurred three months be- fore the decline. There was plenty of opportunity to sell on strength once the warning signals were given. This letter has been suggesting for quite some time Selling on gtrength objectives on individual stocks were reached. We would continue this policy at an accelerate pace, but would continue to hoM and add attractive stocks to our list at favorable price levels. There ar several stocks we have been watching for some time. We will add them to our rec ommended list if the leMets;tmen,j;ioned below are reached. Buy At Buy At American Hospital S. (27 1/8) American Potash (40 1/2) Automatic Canteen (20 3/4) 25 39 19 Interstate Motor Freight (29) 28 Perkin- Elmer (50) 48 Pfaudler Permutit (-30 l/S) 28 Bobbie Brooks (23 3/8) International Paper (32) 22 31 Radio Corp. Wallace & Tiernan (33 1/2) 32 (30 7/8) 29 Dow-Jones Ind. 881. 70 Dow-Jones Rails 195.80 EDMUND W. TABELL WALSTON & CO. INC. senThiS market letter 18 publi!lhed for your convenience and information and is not an offer to or R BOIlcitatlon to buy any eeeuritiee dll!alA8ed. The in- (ormation was obtained from sources we believe to tl' rehable. but we do not guarRntee its accurRcy. WRleton & Co.. Inc. Rnd Its officers. directors or employees ml\.Y have an interest in or purchase and sell the seeurltles referred to herem. WNSOl ,