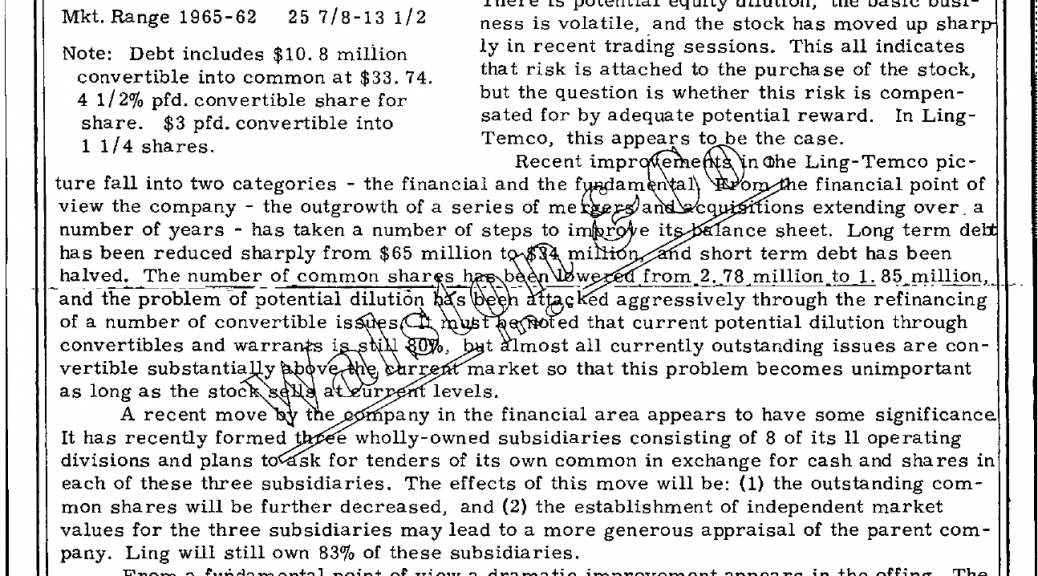 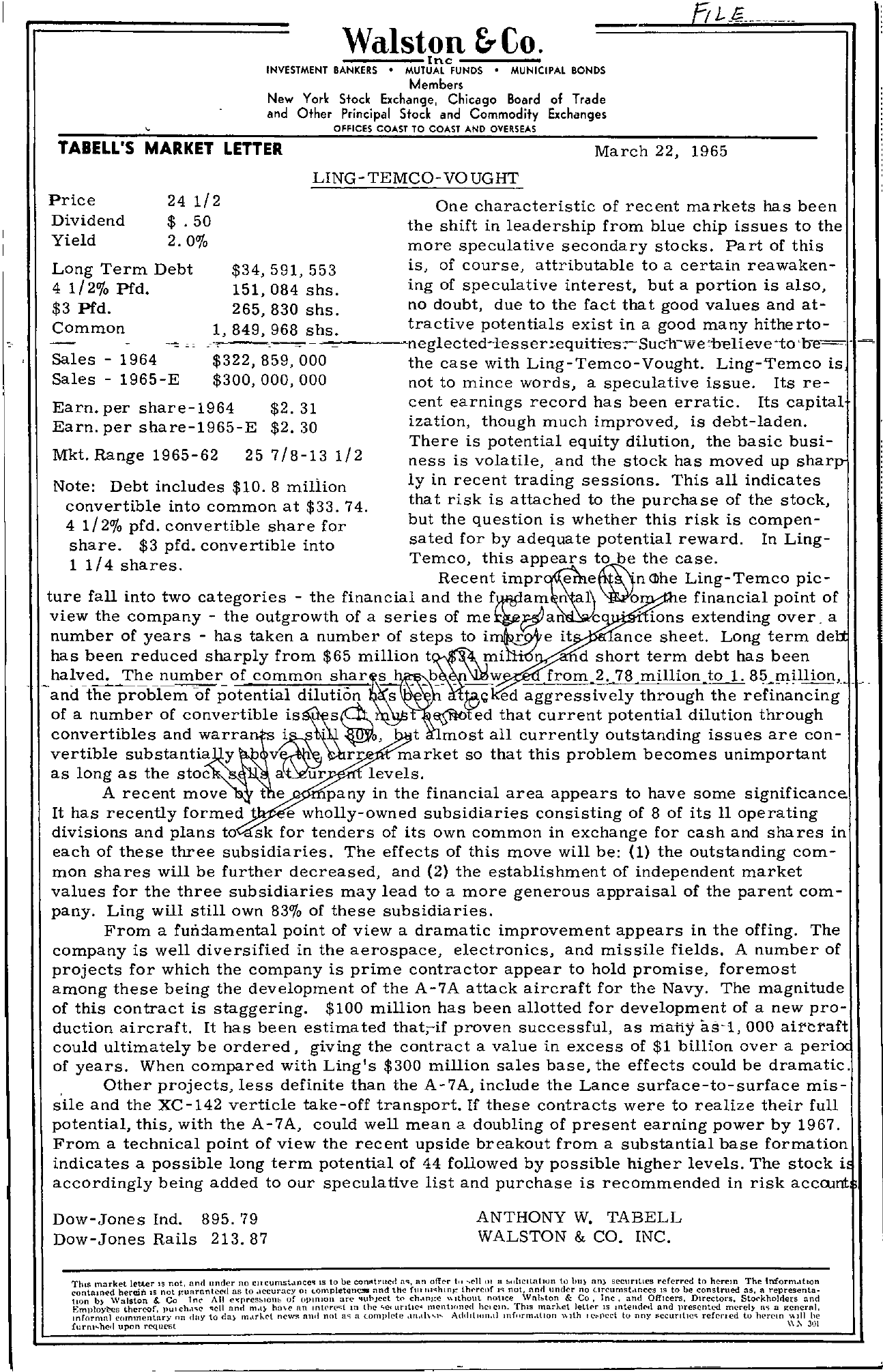 lABEll'S MARKET Walston &eo. – INVESTMENT BANKERS MUTUIAnLcFUNDS MUNICIPAL BONDS Members New York Stock Exchange, Chicago Board of Trade and Other Principal Stock and Commodity Exchanges OFFICES COAST TO COAST AND OVERSEAS lETTER March 22, I 1965 LING – TEMCO- VO UG HT Price Dividend Yield 24 1/2 . 50 2.0 One characteristic of recent markets has been the shift in leadership from blue chip issues to the more speculative secondary stocks. Part of this Long Term Debt 4 1/2 Pfd. 3 Pfd. Common 34,591,553 151,084 shs. 265,830 shs. 1,849,968 shs. is, of course, attributable to a certain reawakening of speculative interest, but a portion is also, no doubt, due to the fact that good values and attractive potentials exist in a good many hitherto- Sales – 1964 322,859,000 Sales – 1965-E 300,000,000 the case with Ling-Temco-Vought. Ling-Temco is not to mince words, a speculative issue. Its re- Earn. per share-1964 2. 31 cent earnings record has been erratic. Its capital Earn. per share-1965-E 2.30 Mkt. Range 1965-62 257/8-13 1/2 ization, though much improved, is debt-laden. There is potential equity dilution, the basic busi- ness is volatile, and the stock has moved up shar Note Debt includes 10.8 miliion convertible into common at 33.74. ly in recent trading sessions. This all indicates that risk is attached to the purchase of the stock, 4 1/2 pfd. convertible share for but the question is whether this risk is compen- share. 3 pfd. convertible into sated for by adequate potential reward. In Ling- 1 1/4 shares. Temco, this appears to be the case. Recent Ling-Temco pic- ture fall into two categories – the financial and the n aI Wo e financial point of view the company – the outgrowth of a series of me c .. ions extending over a number of years – has taken a number of steps to imIRr9te it ance sheet. Long term de has been reduced sharply from 65 million d short term debt has been halved. The number of common w from 2.78 million to 1. 85!llillion, -and -the problemaf potential dilution s — – — – );a,;; – ed aggressively through the refinancing of a number of convertible that current potential dilution through convertibles and vertible substantia y v . rr t most all currently outstanding issues are conmarket so that this problem becomes unimportant as long as the stoc A recent move a ur levels. t e pany in the financial area appears to have some significance. It has recently formed e wholly-owned subsidiaries consisting of 8 of its 11 operating divisions and plans to sk for tenders of its own common in exchange for cash and shares in each of these three subsidiaries. The effects of this move will be (1) the outstanding com- mon shares will be further decreased, and (2) the establishment of independent market values for the three subsidiaries may lead to a more generous appraisal of the parent company. Ling will still own 83 of these subsidiaries. From a fundamental point of view a dramatic improvement appears in the offing. The company is well diversified in the aerospace, electronics, and missile fields. A number of projects for which the company is prime contractor appear to hold promise, foremost among these being the development of the A-7A attack aircraft for the Navy. The magnitude of this contract is staggering. 100 million has been allotted for development of a new pro- duction aircraft. It has been estima ted that;-if proven successful, as maiiy as-i, 000 aircraft could ultimately be ordered, giving the contract a value in excess of 1 billion over a peri of years. When compared with Ling's 300 million sales base, the effects could be dramatic. . Other projects, less definite than the A-7A, include the Lance surface-to-surface mis- sile and the XC-142 verticle take-off transport. If these contracts were to realize their full potential, this, with the A-7A, could well mean a doubling of present earning power by 1967. From a technical point of view the recent upside breakout from a substantial base formation indicates a possible long term potential of 44 followed by possible higher levels. The stock i accordingly being added to our speculative list and purchase is recommended in risk accamt Dow-Jones Ind. 895. 79 Dow-Jones Rails 213.87 ANTHONY W. TABELL WALSTON & CO. INC. ThiS market letter IS not, and under no IS to be con..trucd U, nn offer t ..('1\.)1 bhCllatwll to hu an seCUrities referred to herem The tnform.ltlon contamed herein IS not j.!unrnntced as to .lccuracy 01 LompletenC!ill md the fut IIIhlnJ. lht'fcnf I nol, and under no ..Ircumst.IIlCCS IS to be construed as, n representa- tIOn b \\'alsHlIl &. Co In(' All c.;prCS!10nb of VIHnlO11 arc '1111ect te Ch,HI)!e \\lthol11. notIce \Vnlbton & Co, Inc. and Officers, Dlrcctors. StoC'kholrlers and Employl'cs therwf, pUlch,I;(' 'lell and hlne an III the rnrormaJ commentary nn dllY to la m.lTh.('l nCW5 and lint a; a (,.oml,lete mentlOllC'd hC'IClIl ThIS market Jelt;r IS Intend;.j and prescnt('i merel us a Jlcnernl. Addltln,1I lllfrnr,ltlon \\lth t(',peet to IIny 5ccurlllC; rcfened tt) herelll \\111 he upon rcqu!;,st \\.\ JI)!