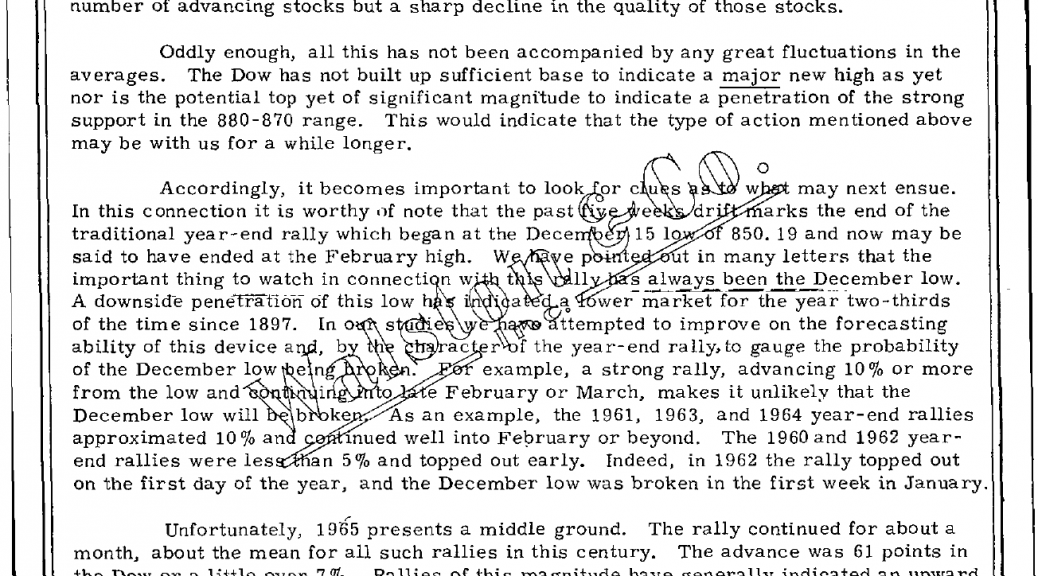 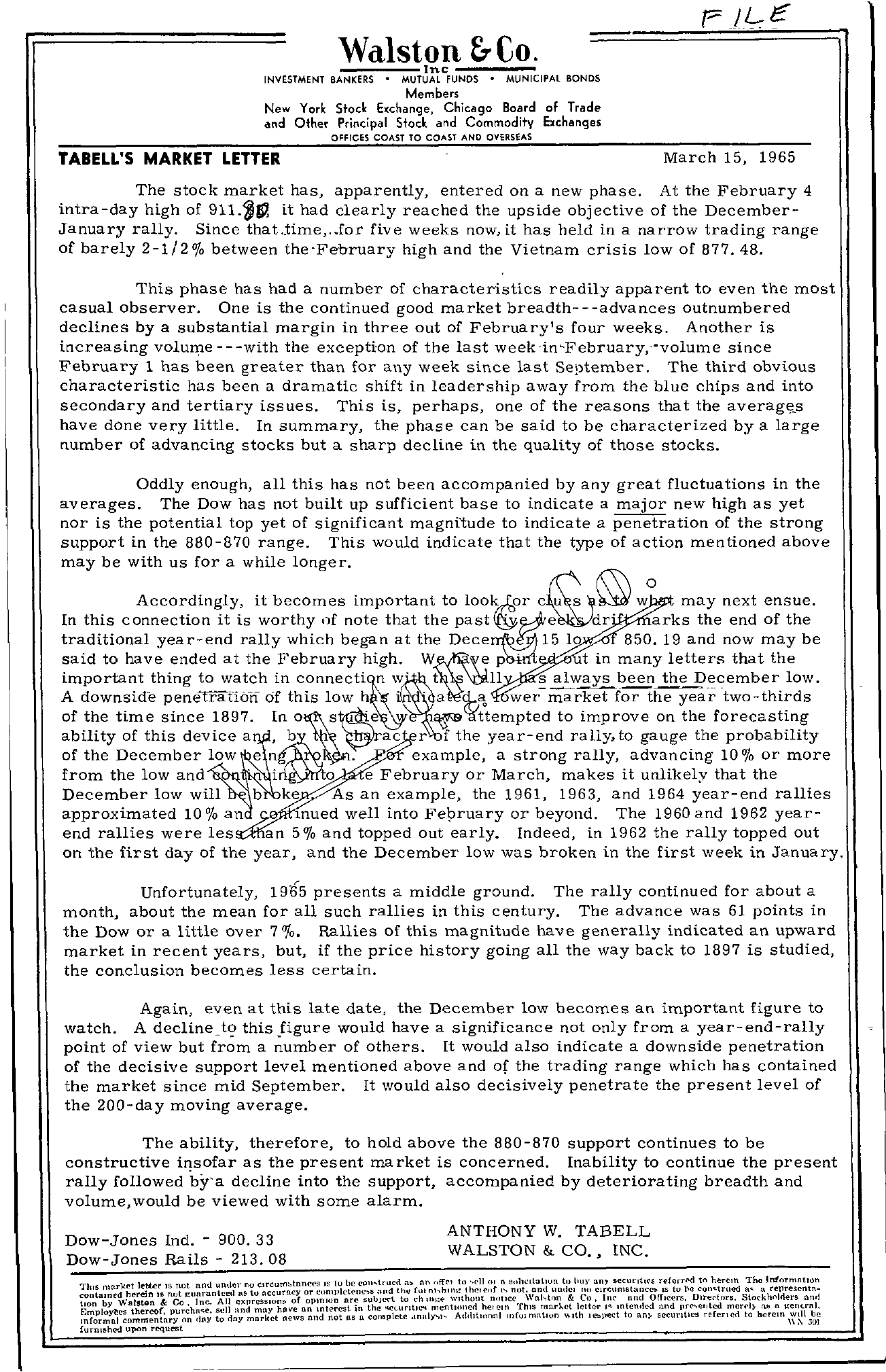 Walston &- Co. Inc – INVESTMENT BANKERS MUTUAL FUNDS MUNICIPAL BONDS Members New York Stock Exchange, Chicago Board of Trade and Other Principal Stock and Commodity Exchanges OFFICES COAST TO COAST AND OVERSEAS TABELL'S MARKET LETTER March 15, 1965 The stock market has, apparently, entered on a new phase. At the February 4 intra-day high of 911.jg1, it had clearly reached the upside objective of the DecemberJanuary rally. Since that..time.for five weeks now, it has held in a narrow trading range of barely 2-1/2 between the 'February high and the Vietnam crisis low of 877.48. This phase has had a number of characteristics readily apparent to even the most casual observer. One is the continued good market breadth—advances outnumbered declines by a substantial margin in three out of February's four weeks. Another is increasing volun;.e – – -with the exception of the last week 'in-FebruarY;'volume since February 1 has been greater than for any week since last September, The third obvious characteristic has been a dramatic shift in leadership away from the blue chips and into secondary and tertiary issues. This is, perhaps, one of the reasons that the averagEs have done very little. In summary, the phase can be said to be characterized by a large number of advancing stocks but a sharp decline in the quality of those stocks. Oddly enough, all this has not been accompanied by any great fluctuations in the averages. The Dow has not built up sufficient base to indicate a major new high as yet nor is the potential top yet of significant magnitude to indicate a penetration of the strong support in the 880-870 range. This would indicate that the type of action mentioned above may be with us for a while longer. Accordingly, it becomes important to look);,or wO may next ensue. In this connection it is worthy ,)f note that the arks the end of the traditional year-end rally which began at the 15 10 850. 19 and now may be said to have ended at the February high. p'hlrti ut in many letters that the thing to watch in ,t 11 the December,low. A downslde penetrahon of thlS low h r a ;!..il; wer market for the year two-thlrds of the time since 1897. In 0 s 'e to improve on the forecasting of the December low n . example, a strong rally, advancing 10 or more from the low and i 0 e February Or March, makes it unlikely that the As an example, the 1961, 1963, and 1964 year-end rallies approximated 10 an lnued well into Felruary or beyond. The 1960 and 1962 year- end rallies were les an 5 and topped out early. Indeed, in 1962 the rally topped out on the first day of the year, and the December low was broken in the first week in January. Unfortunately, 1965 presents a middle ground. The rally continued for about a month, about the mean for all such rallies in this century. The advance was 61 points in the Dow or a little over 7 . Rallies of this magnitude have generally indicated an upward market in recent years, but, if the price history going all the way back to 1897 is studied, the conclusion becomes less certain. Again, even at this late date, the December low becomes an important figure to watch. A declinetS' this Jigure would have a significance not only from a year-end-rally point of view but from a number of others. It would also indicate a downside penetration of the decisive support level mentioned above and of the trading range which has contained the market since mid September. It would also decisively penetrate the present level of the 200-day moving average. The ability, therefore, to hold above the 880-870 support continues to be constructive insofar as the present market is concerned. Inability to continue the present rally followed by'a decline into the support, accompanied by deteriorating breadth and volume, would be viewed with some alarm. Dow-Jones Ind. – 900.33 Dow-Jones Rails – 213.08 ANTHONY W. TABELL WALSTON & CO., mc. Th lr'\!.et letter IS not and under no ClrCulTlbtnnces IS to he con..trucd fib nn ffCl to ('II OJ n to huy sccurlti('s Tt'fcrrl'd to herem The IS mt h II nut 'unrantecd as to nccuracy or cumlllctcnc-,s and thc fut nhhll1l! Ihete,,! t.. not. nnd untiCI 111 clrcumstanCC,. IS to te cOIl'truei Il' n jby V. Col! Inc- All expressIOn. of opllllOn nre subJcrt to Chlll.!E' wIthout lIotlce, & Co, InC' Rnd OffIcers. Dlrel'\ors. Stockholders nnr! sell lind mny hllve 1111 Interest in th(! menttnncd heteln fhls marct Ictter I lnten.ied and pf'-.etct.i mer'i) ah 1\ genunl, IIImo,prmOYnl!,,,e,OMn'Hm t'IlPry on ('..y t0 ,y mok' ..'ew5 nnd not IlS II. complcte Ad.htlnnni ttlfUl million \\Ith to an) secuntws referted to hcrCIn WIll JbOc! furmshed upon request