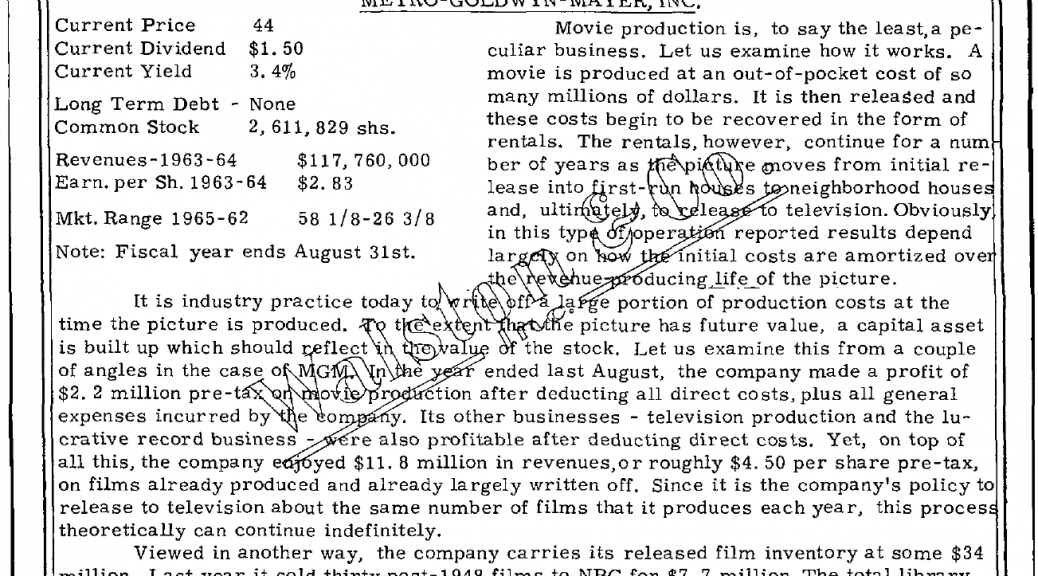 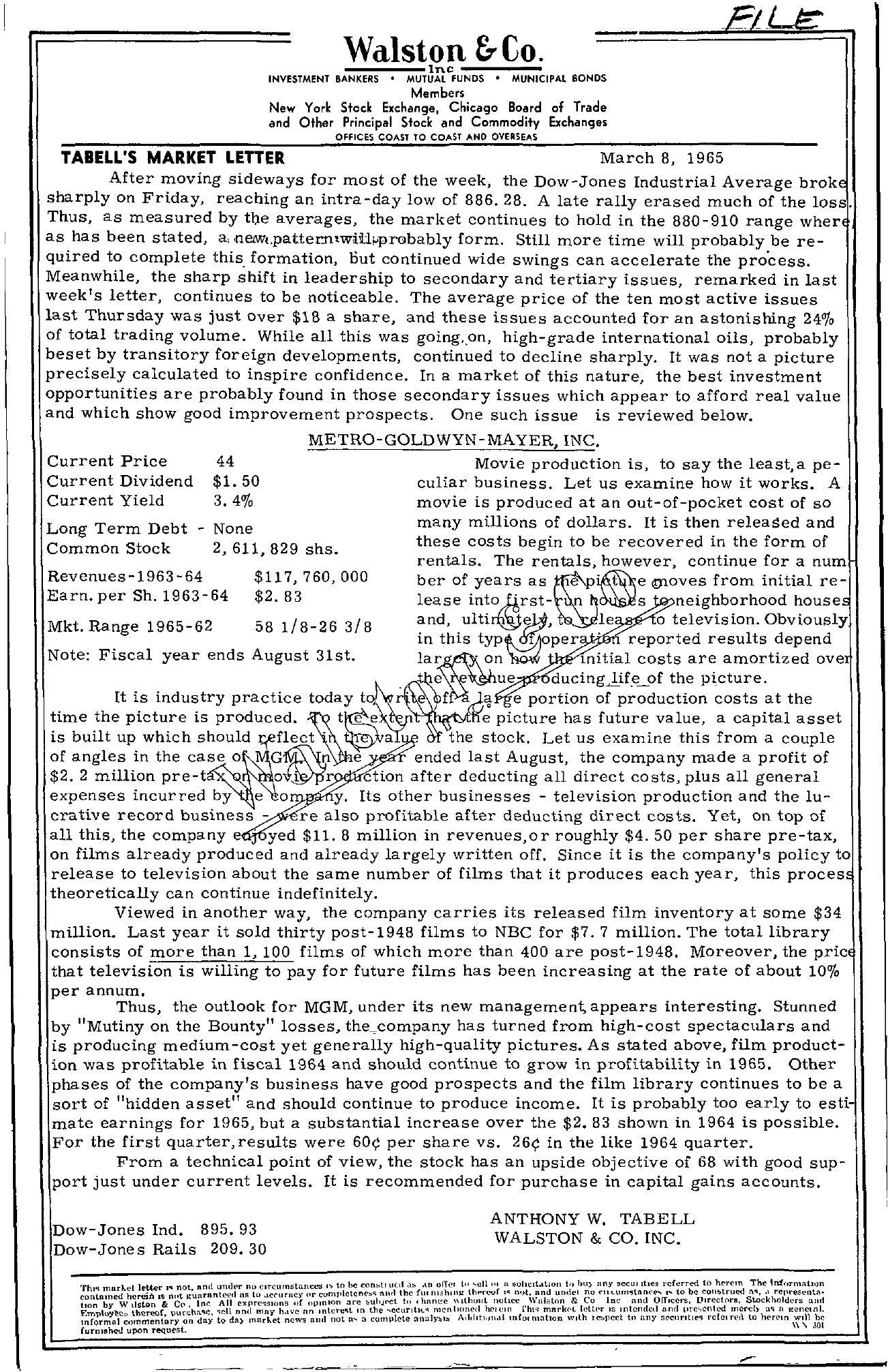 Walston &Co. …;……;;,;.;;;..;;…;; 1n C INVESTMENT BANKERS MUTUAL fUNDS MUNICIPAL BONDS Members New York Stock Exchange, Chicago Board of Trade and Other Principal Stock and Commodity Exchanges OFFICES COAST TO COAST AND OVERSEAS TABELL'S MARKET LETTER March 8, 1965 After moving sideways for most of the week, the Dow-Jones Industrial Average brok sharply on Friday, reaching an intra-day low of 886.28. A late rally erased much of the loss. Thus, as measured by the averages, the market continues to hold in the 880-910 range wher as has been stated, a, form. Still more time will probably be re- quired to complete this formation, out continued wide swings can accelerate the process. Meanwhile, the sharp shift in leadership to secondary and tertiary issues, remarked in last week's letter, continues to be noticeable. The average price of the ten most active issues last Thursday was just over 18 a share, and these issues accounted for an astonishing 240/0 of total trading volume. While all this was gOing.,on, high-grade international oils, probably beset by transitory foreign developments, continued to decline sharply. It was not a picture precisely calculated to inspire confidence. In a market of this nature, the best investment opportunities are probably found in those secondary issues which appear to afford real value and which show good improvement prospects. One such issue is reviewed below. METRO-GOLDWYN-MAYER, INC. Current Price 44 Current Dividend 1. 50 Current Yield 3.4 Movie production is, to say the least,a peculiar business. Let us examine how it works. A movie is produced at an out-of-pocket cost of SO Long Term Debt – None Common Stock 2, 611, 829 shs. Revenues-1963-64 117,760,000 Earn. per Sh.1963-64 2. 83 many millions of dollars. It is then releaSed and these costs begin to be recovered in the form of rentals. The rentals, however, continue for anum ber of years as (!'loves from initial re- lease intoJl,rst- n neighborhood house Mkt. Range 1965-62 58 1/8-26 3/8 and, in this Ie 0 television. Obviously d1Aoper . reported results depend Note Fiscal year ends August 31st. lOitial costs are amortized ove ue the picture. It is industry practice today e f ' e portion of production costs at the time the picture is produced. e picture has future value, a capital asset is built up which should r flect' the stock. Let us examine this from a couple of angles in the case 0 e ended last August, the company made a profit of 2.2 million pre-t ction after deducting all direct costs, plus all general expenses incurred by e y. Its other businesses – television production and the lu- crative record business – re also profitable after deducting direct costs. Yet, on top of all this, the company eyed 11. 8 million in revenues,or roughly 4. 50 per share pre-tax, on films already produced and already largely written off. Since it is the company's policy to release to television about the same number of films that it produces each year, this proces theoretically can continue indefinitely. Viewed in another way, the company carries its released film inventory at some 34 million. Last year it sold thirty post-1948 films to NBC for 7. 7 million. The total library consists of more than 1,100 films of which more than 400 are post-1948. Moreover, the pric that television is willing to pay for future films has been increasing at the rate of about 10 per annum. Thus, the outlook for MGM, under its new managemen1; appears interesting. Stunned by Mutiny on the Bounty losses, has turned from high-cost spectaculars and is producing medium-COst yet generally high-quality pictures. As stated above, film product- ion was profitable in fiscal 1964 and should continue to grow in profitability in 1965. Other phases of the company's business have good prospects and the film library continues to be a sort of hidden asset and should continue to produce income. It is probably too early to esti- mate earnings for 1965, but a substantial increase over the 2.83 shown in 1964 is possible. For the first quarter,results were 60 per share vs. 26 in the like 1964 quarter. From a technical pOint of view, the stock has an upside objective of 68 with good sup- port just under current levels. It is recommended for purchase in capital gains accounts. Dow-Jones Ind. 895.93 Dow-Jones Rails 209.30 ANTHONY W. TABELL WALSTON & CO. INC. Thl'l market Ictter 1'1 not. and undl'r 110 CITclItTlstanccs I., tn he contluu! .1.. ,lIl ofTe! In ' 11 SOIl('lt.ltlOl1 I bll) any seclir liles referred to herem The tnformatl)n n lmed hcr-ciills nut I!unrnntee\ all to ..1('C'UTllC)' or ('umpietcnc,,-; allll the fut nJ5hlllJ.( th..n….f. nt, \lnde. no rIlLum'ltnn'('….. tobe eot!!.trued n ' rellresentn co t W I to & C Inc All f pmlOn are t \\lthollt notice \\ lI'ton & Co Inc and Officers. Directors, Stockholders anrl IbYt! ' n r '\1. …e lind may h.we 'In Ifltcrc…t In the ..ccur.llL'l mcntwned hC1Cltl I'hl mark't !eltl'r IS Intended mere! II J,(cneln1. day to da market new; alltl not a 1 com\llcte Add.tl.jn.d mfO! mallon WIth lc,pect tn any relet rel\ to herein furnished upon request.