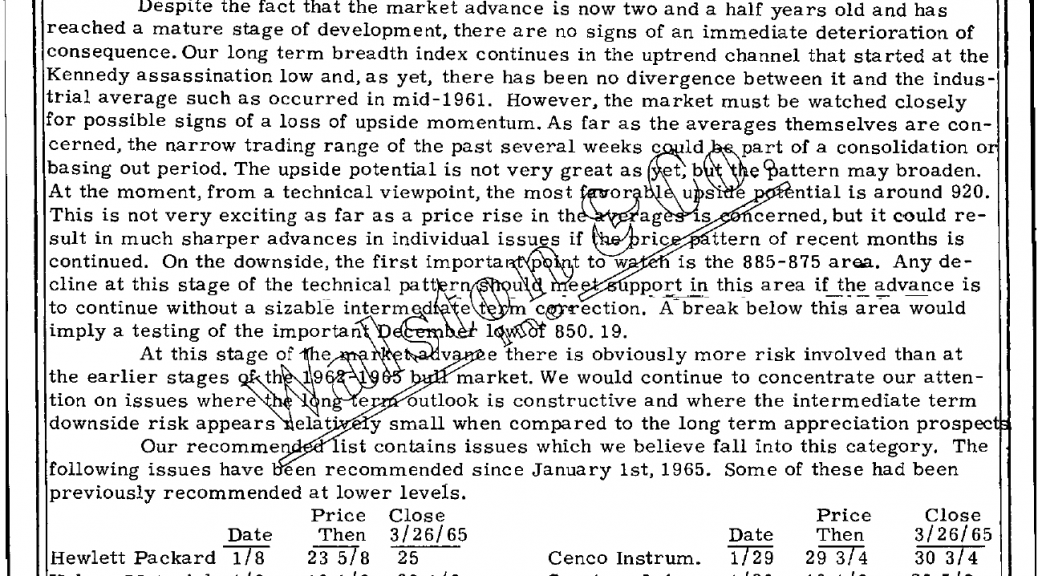 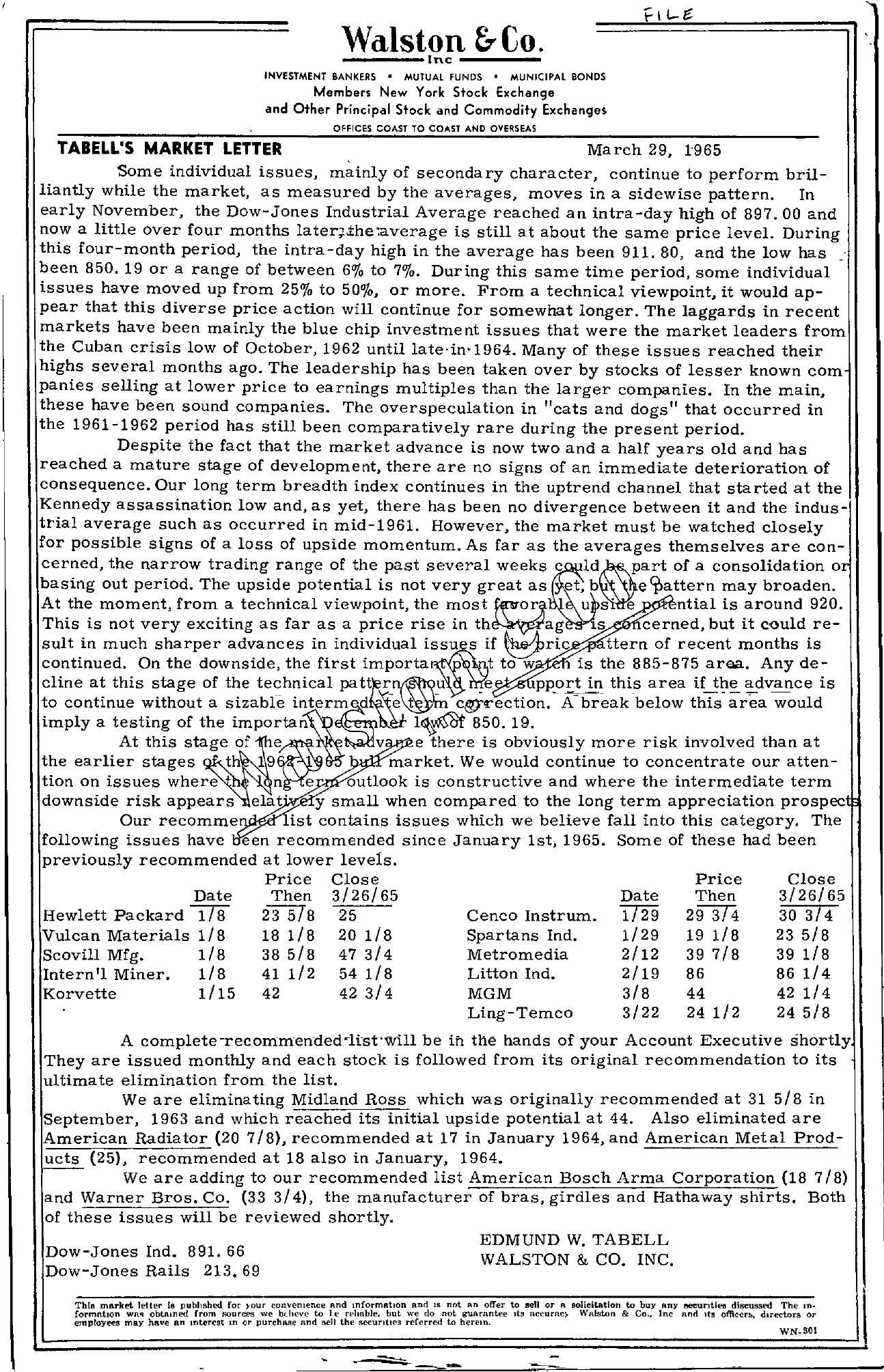 Walston &- Co. Inc INVESTMENT BANKERS MUTUAL FUNDS MUNICIPAL BONDS Members New York Stock Exchange and Other Principal Stock and Commodity Exchanges OFFICES COAST TO COAST AND OVERSEAS TABELL'S MARKET LETTER March 29, 1'965 Some individual issues, mainly of secondary character, continue to perform bril- liantly while the market, as measured by the averages, moves in a sidewise pattern. In early November, the Dow-Jones Industrial Average reached an intra-day high of 897.00 and now a little over four months is still at about the same price level. During this four-month period, the intra-day high in the average has been 911. 80, and the low has been 850.19 or a range of between 6 to 7. During this same time period, some individual issues have moved up from 25 to 50, or more. From a technical viewpoint, it would appear that this diverse price action will continue for somewhat longer. The laggards in recent markets have been mainly the blue chip investment issues that were the market leaders from the Cuban crisis low of October, 1962 untillatein1964. Many of these issues reached their highs several months ago. The leadership has been taken over by stocks of lesser known com panies selling at lower price to earnings multiples than the larger companies. In the main, these have been sound companies. The overspeculation in cats and dogs that occurred in the 1961-1962 period has still been comparatively rare during the present period. Despite the fact that the market advance is now two and a half years old and has reached a mature stage of development, there are no signs of an immediate deterioration of consequence. Our long term breadth index continues in the uptrend channel that started at the Kennedy assassination low and, as yet, there has been no divergence between it and the industrial average such as occurred in mid-1961. However, the market must be watched closely for possible signs of a loss of upside momentum. As far as the averages themselves are con- cerned, the narrow trading range of the past several basing out period. The upside potential is not very great as At the moment, from a technical viewpoint, the most This is not very exciting as far as a price rise in of a consolidation 0 et, b e cpattern may broaden. u s' e ntial is around 920. s cerned, but it could re- sult in much sharper advances in individual issues if 9ric ttern of recent months is continued. On the downside, the first to w is the 885-875 area. Any de- cline at this stage of the technical to continue without a sizable inter;. in this area is A break below this area would imply a testing of the At this stage of the earlier stages Hi 19 850.19. v e there is obviously more risk involved than at market. We would continue to concentrate our atten- tion on issues where n e outlook is constructive and where the intermediate term downside risk appears elat' y small when compared to the long term appreciation prospec Our recomme ist contains issues which we believe fall into this category. The following issues have een recommended since January 1st, 1965. Some of these had been previously recommended at lower levels. Date Hewlett Packard 118 Price Close Then 3/26/65 23 5/8 25 Date Cenco Instrum. T729 Price Then 29374 Close 3/26/65 30 3/4 Vulcan Materials 1/8 Scovill Mfg. 1/8 Intern'l Miner. 1/8 Korvette 1/15 181/8 385/8 41 1/2 42 20 1/8 473/4 541/8 42 3/4 Spartans Ind. Metromedia Litton Ind. MGM Ling-Temco 1/29 2/12 2/19 3/8 3/22 19 1/8 397/8 86 44 241/2 235/8 39 1/8 861/4 42 1/4 245/8 A complete-recommen-ded-ltst'will be in the hands of your Account Executive shortly They are issued monthly and each stock is followed from its original recommendation to its ultimate elimination from the list. We are eliminating Midland Ross which was originally recommended at 31 5/8 in September, 1963 and which reached its initial upside potential at 44. Also eliminated are American Radiator (20 7/8), recommended at 17 in January 1964, and American Metal Prod- ucts (25), recommended at 18 also in January, 1964. – – We are adding to our recommended list American Bosch Arma Corporation (18 7/8) and Warner Bros. Co. (33 3/4), the manufacturer of bras, girdles and Hathaway shirts. Both of these issues will be reviewed shortly. Dow-Jones Ind. 891. 66 Dow-Jones Rails 213.69 EDMUND W. TABELL WALSTON & CO. INC. This market Jetter 18 pubhshed for convenience find informatIOn Rnd IS not an offer to sell or 9OlIdt.atlon to buy Rny 8eCufltiea discussed The in formntlOn Wit'! obtAined from sources we btheve to Ie nJable. but we do not gUArantee Its ,,'Riston & Co.. Inc and Its officer!, directors or emptoyees may have an Interest In or purchfUle and sell the seCUrities referred to herem. WN.SOI