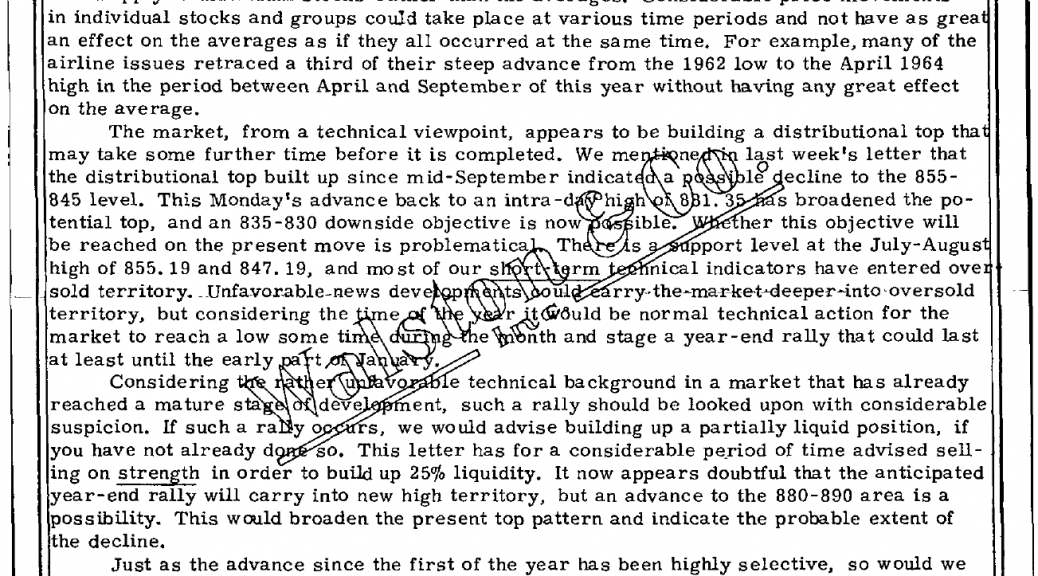 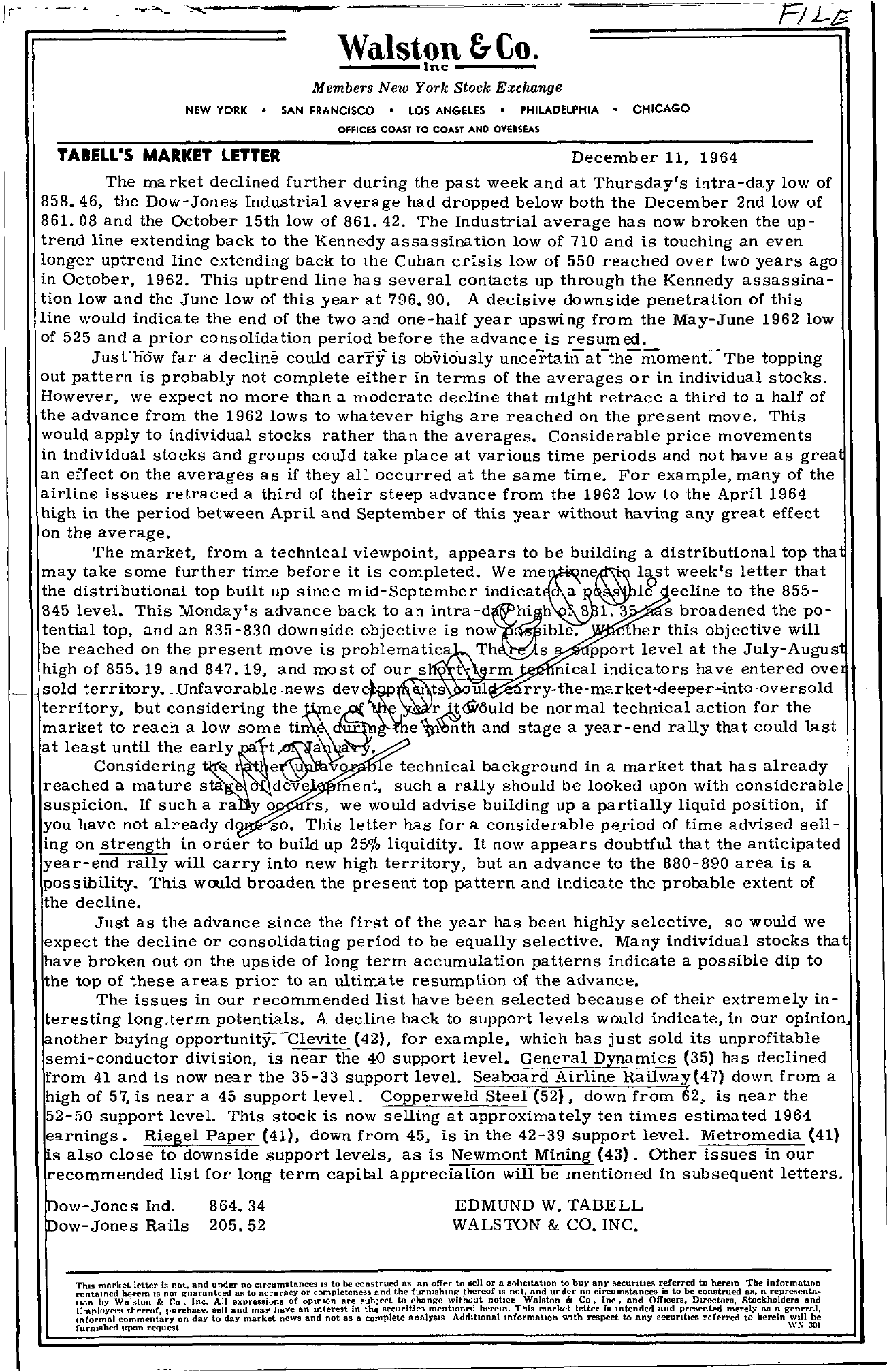 Walston &Co. Inc ;;…—- Members New York Stock Exclu1nge NEW YORK SAN FRANCISCO LOS ANGELES PHILADELPHIA CHICAGO OFFICES COAST TO COAST AND OVERSEAS TABELL'S MARKET LETTER December 11, 1964 The market declined further during the past week and at Thursday's intra-day low of 858.46, the Dow-Jones Industrial average had dropped below both the December 2nd low of 861. 08 and the October 15th low of 861. 42. The Industrial average has now broken the up- trend line extending back to the Kennedy assassination low of 710 and is touching an even longer uptrend line extending back to the Cuban crisis low of 550 reached over two years ago in October, 1962. This uptrend line has several contacts up through the Kennedy assassination low and the June low of this year at 796.90. A decisive downside penetration of this line would indicate the end of the two and one-half year upswing from the May-June 1962 low of 525 and a prior consolidation period before the advance is resumed. Jusni6w far a decline could carry' is obviously uncertainat-themoment – The -topping out pattern is probably not complete either in terms of the averages or in individual stocks. However, we expect no more than a moderate decline that might retrace a third to a half of the advance from the 1962 lows to whatever highs are reached on the present move. This would apply to individual stocks rather than the averages. Considerable price movements in individual stocks and groups could take place at various time periods and not have as grea an effect on the averages as if they all occurred at the same time. For example, many of the airline issues retraced a third of their steep advance from the 1962 low to the April 1964 high in the period between April and September of this year without having any great effect on the average. The market, from a technical viewpoint, appears to be building a distributional top tha may take some further time before it is completed. We the distributional top built up since mid-September indicat a last week's letter that ecline to the 855- 845 level. This Monday's advance back to an tential top, and an 835-830 downside objective is now be reached on the present move is problematica Th h 8 1. 3 s broadened the po- ible. her this objective will s pport level at the July-Augus high of 855.19 and 847.19, and most of our s t rm sold territory. Unfavor.able-news ts ul nical indicators have entered ove territory, but considering market to reach a low some ti be normal technical action for the and stage a year-end rally that could last at least until the a Considering e technical background in a market that has already reached a mature sta deve ent, such a rally should be looked upon with considerable suspicion. If such a ra yo rs, we would advise building up a partially liquid position, if you have not already d so. This letter has for a considerable pepiod of time advised sell- ing on strength in order to build up 250/0 liquidity. It now appears doubtful that the anticipated year-end rally will carry into new high territory, but an advance to the 880-890 area is a possibility. This would broaden the present top pattern and indicate the probable extent of the decline. Just as the advance since the first of the year has been highly selective, so would we expect the decline or consolidating period to be equally selective. Many individual stocks that have broken out on the upside of long term accumulation patterns indicate a possible dip to the top of these areas prior to an ultimate resumption of the advance. The issues in our recommended list have been selected because of their extremely in- eresting long .term potentials. A decline back to support levels would indicate, in our op!.nion nother buying opportunity. -Clevite (42), for example, which has just sold its unprofitable semi-conductor division, is near the 40 support level. General Dynamics (35) has declined from 41 and is now near the 35-33 support level. Seaboard Airline down from a high of 57, is near a 45 support level. Copperweld Steel (52), down from 2, is near the 52-50 support level. This stock is now selling at approximately ten times estimated 1964 earnings. Riegel Paper (41), down from 45, is in the 42-39 support level. Metromedia (41) 's also close to downside support levels, as is Newmont Mining (43). Other issues in our recommended list for long term capital appreciation will be mentioned in subsequent letters. ow-Jones Ind. 864.34 ow-Jones Rails 205.52 EDMUND W. TABELL WALSTON & CO. INC. This mnrket letter is not. and under no cIrcumstances IS to be Clnstrued as, an offer to sell or a sohcltatlon to buy al)Y seeurltles r.eferred to herem 1'he information contained herem IS not guaranteed all to nccurtlcy or completeness and the tbereoC 111 not, and under no to be construed ao, a tlon by Walston & Co Inc. All expressions of opInion are uhJect to change without notice Walston & Co, Inc, and Officers, Directors, Stockholders and l;mpoyees thereof, sell and may have an Interest in the securities mentioned herem. This market letter io mtended and presented merely as general, Informal commontary on day to day market news and not as a complete analYSIS Additional informatIOn With respect to any seeuflttes referred to herem will be furnished upon request \\,N 301