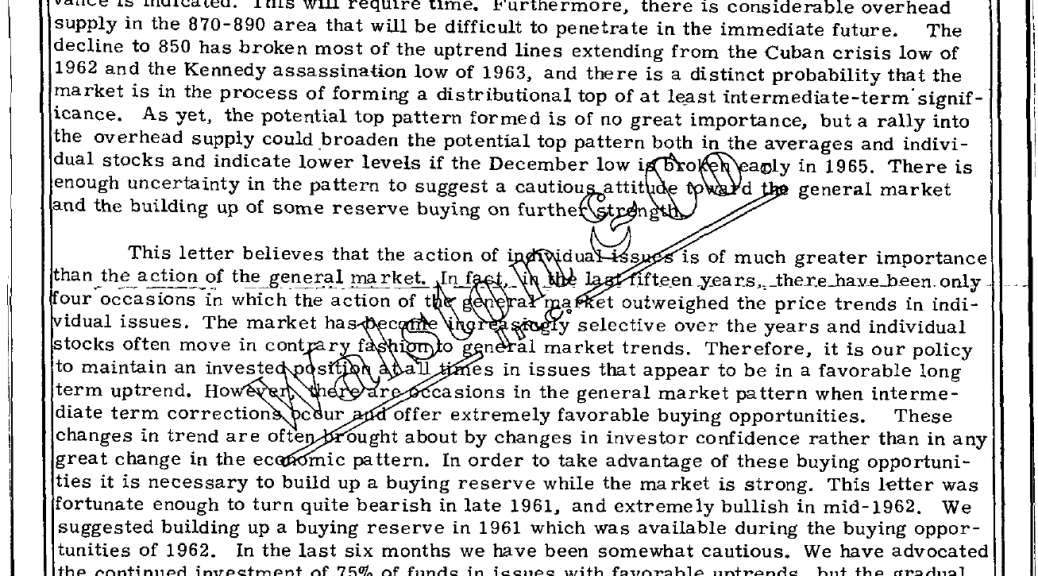 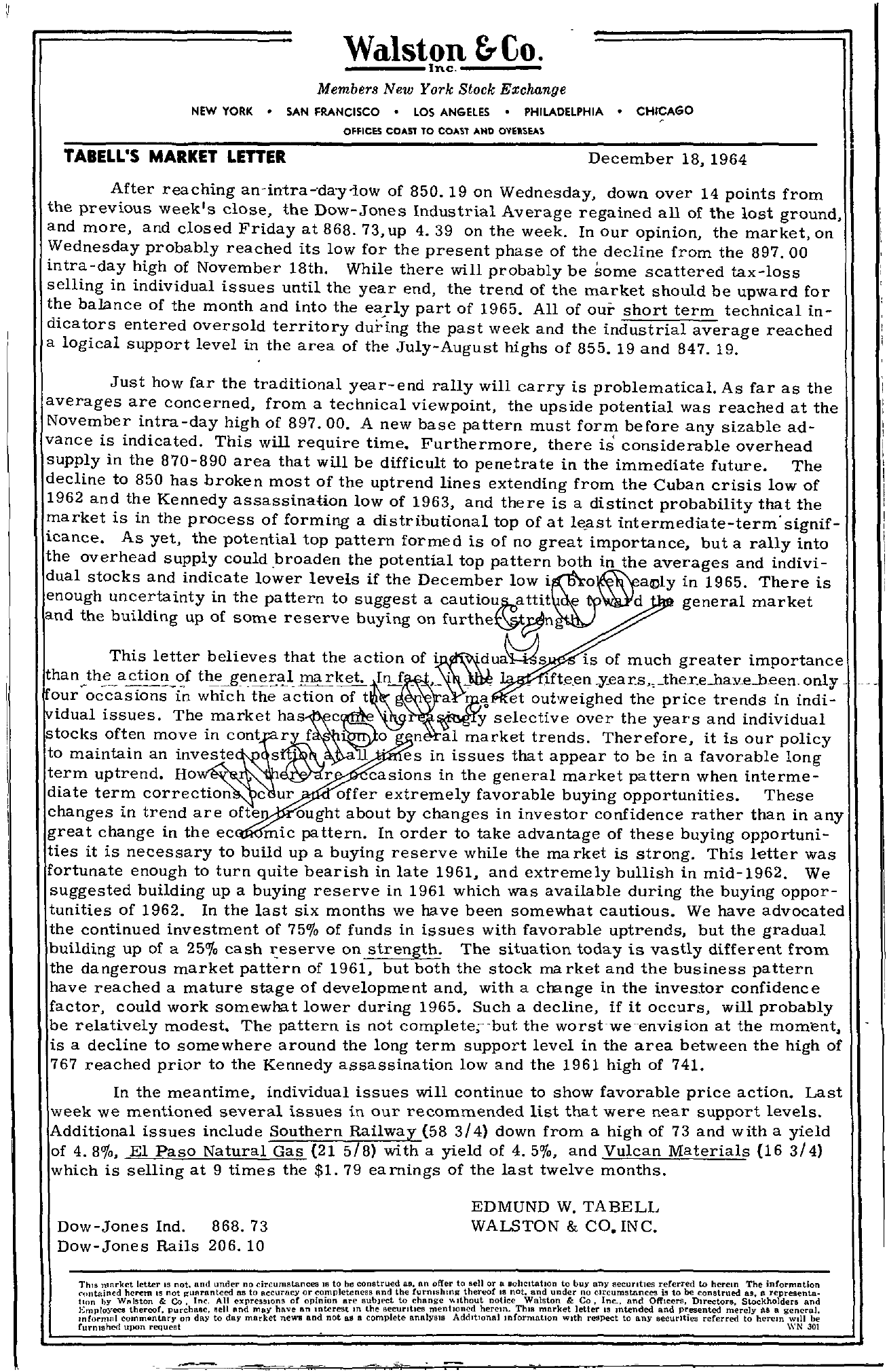 Walston &Co. ';lnc Members New York Stock Exchange NEW YORK SAN FRANCISCO LOS ANGELES PHILADELPHIA OFFICES COAST TO COAST AND OVERSEAS CHICAGO TABEll'S MARKET LEnER December 18, 1964 After reaching an-intra–da-y10w of 850.19 on Wednesday, down over 14 points from the previous week's close, the Dow-Jones Industrial Average regained all of the lost ground, and more, and closed Friday at 868. 73, up 4. 39 on the week. In our opinion, the market, on Wednesday probably reached its low for the present phase of the decline from the 897.00 intra-day high of November 18th. While there will probably be some scattered tax-loss selling in individual issues until the year end, the trend of the market should be upward for the balance of the month and into the ea,rly part of 1965. All of our short term technical in- dicators entered oversold territory during the past week and the industrial average reached a logical support level in the area of the July-August highs of 855. 19 and 847. 19. Just how far the traditional year-end rally will carry is problematical. As far as the averages are concerned, from a technical viewpoint, the upside potential was reached at the November intra-day high of 897.00. A new base pattern must form before any sizable ad- vance is indicated. This will require time. Furthermore, there is' considerable overhead supply in the 870-890 area that will be difficult to penetrate in the immediate future. The decline to 850 has broken most of the uptrend lines extending from the Cuban crisis low of 1962 and the Kennedy assassinati.on low of 1963, and there is a distinct probability that the market is in the process of forming a distributional top of at least intermediate-term'signif- icance. As yet, the potential top pattern formed is of no great importance, but a rally into the overhead supply could broaden the potential top pattern both in the averages and indivi- dual stocks and indicate lower levels if the December low enough uncertainty in the pattern to suggest a e )\fa)Jd in 1965. There is general market and the building up of some reserve buying on This letter believes that the action of is of much greater importance market. our occasions in which the action of t , . . .,fteeos,tber.eJaYeJ,o.olli, et outweighed the price trends in indi- idual issues. The market selective over the years and indiVidual stocks often move in cont to maintain an investe s' . 0 n al market trends. Therefore, it is our policy . es in issues that appear to be in a favorable long term uptrend. Ho r casions in the general market pattern when interme- diate term correction c ur offer extremely favorable buying opportunities. These changes in trend are ofte ought about by changes in investor confidence rather than in any great change in the ec mic pattern. In order to take advantage of these buying opportuni- ties it is necessary to build up a buying reserve while the rna rket is strong. This letter was fortunate enough to turn quite bearish in late 1961, and extremely bullish in mid-1962. We suggested building up a buying reserve in 1961 which was available during the buying oppor- tunities of 1962. In the last six months we have been somewhat cautious. We have advocated the continued investment of 750/0 of funds in issues with favorable uptrends, but the gradual building up of a 250/0 cash xeserve on strength. The situation today is vastly different from the dangerous market pattern of 1961, but both the stock market and the business pattern have reached a mature stage of development and, with a change in the investor confidence factor, could work somewhat lower during 1965. Such a decline, if it occurs, will probably be relatively modest. The pattern is not complete;-'but the worstweenvision at the moment, is a decline to somewhere around the long term support level in the area between the high of 767 reached prior to the Kennedy assassination low and the 1961 high of 741. In the meantime, individual issues will continue to show favorable price action. Last week we mentioned several issues in our recommended list that were near support levels. Additional issues include Southern Railway (58 3/4) down from a high of 73 and with a yield of 4.80/0, EI Paso Natural Gas (21 5/8) with a yield of 4.50/0, and Vulcan Materials (16 3/4) which is selling at 9 times the 1. 79 earnings of the last twelve months. Dow-Jones Ind. 868. 73 Dow-Jones Rails 206. 10 EDMUND W. TABELL WALSTON & CO. INC. ThiS nlllrkct letter IS not. and under no drcumstances 16 to be construed as, an offer to sell or ( ontained herem IS not gUArnnteed as to accurACY or completeness and the furmshmg thereof a sohcltation to buy 111 not. and under no nn)' securlttes r.eferred Circumstances l!I to be to herem construed ATSh, ea information representn. 'on by W,.lston & Co. In(', All expreSSIOns of opinion are to change Ydthout notice Walston &. Co, Inc., and Officers, Directors, Stockholders and EInmCpolroryo(n'l('8cotmhmer'elfolft,nrpyurocnhdasaey, sell find may have an mterest In to day market neWl! and not 88 8 the SeCurities mentlOned herem. ThiS market letter 18 mtended and pr.esentcd merely jl.S a general, complete analYSIS AddItIOnal mformatlOn With respect to any securities referred to herein Will be furnished upon requeot WN 301