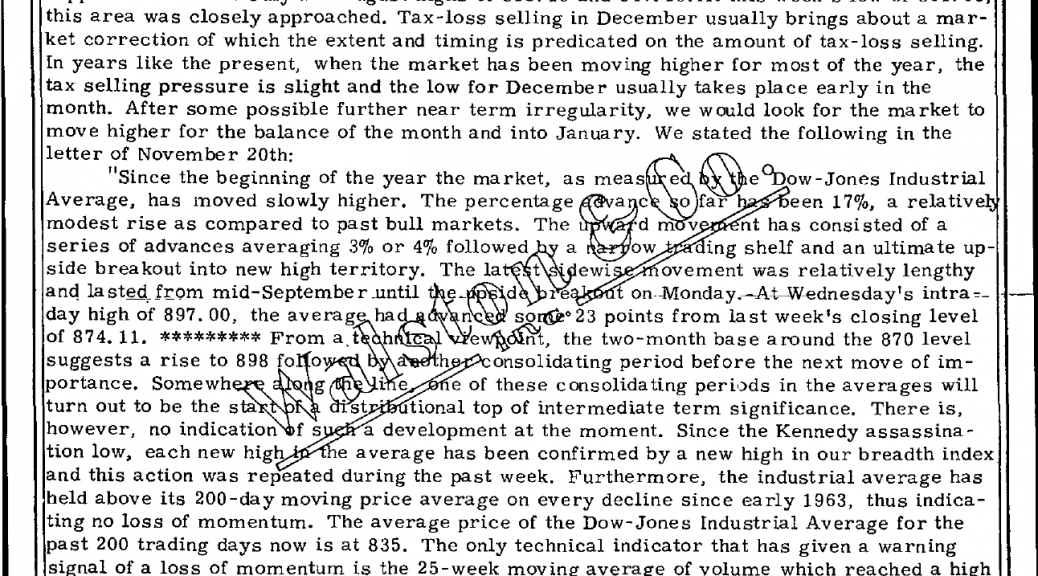 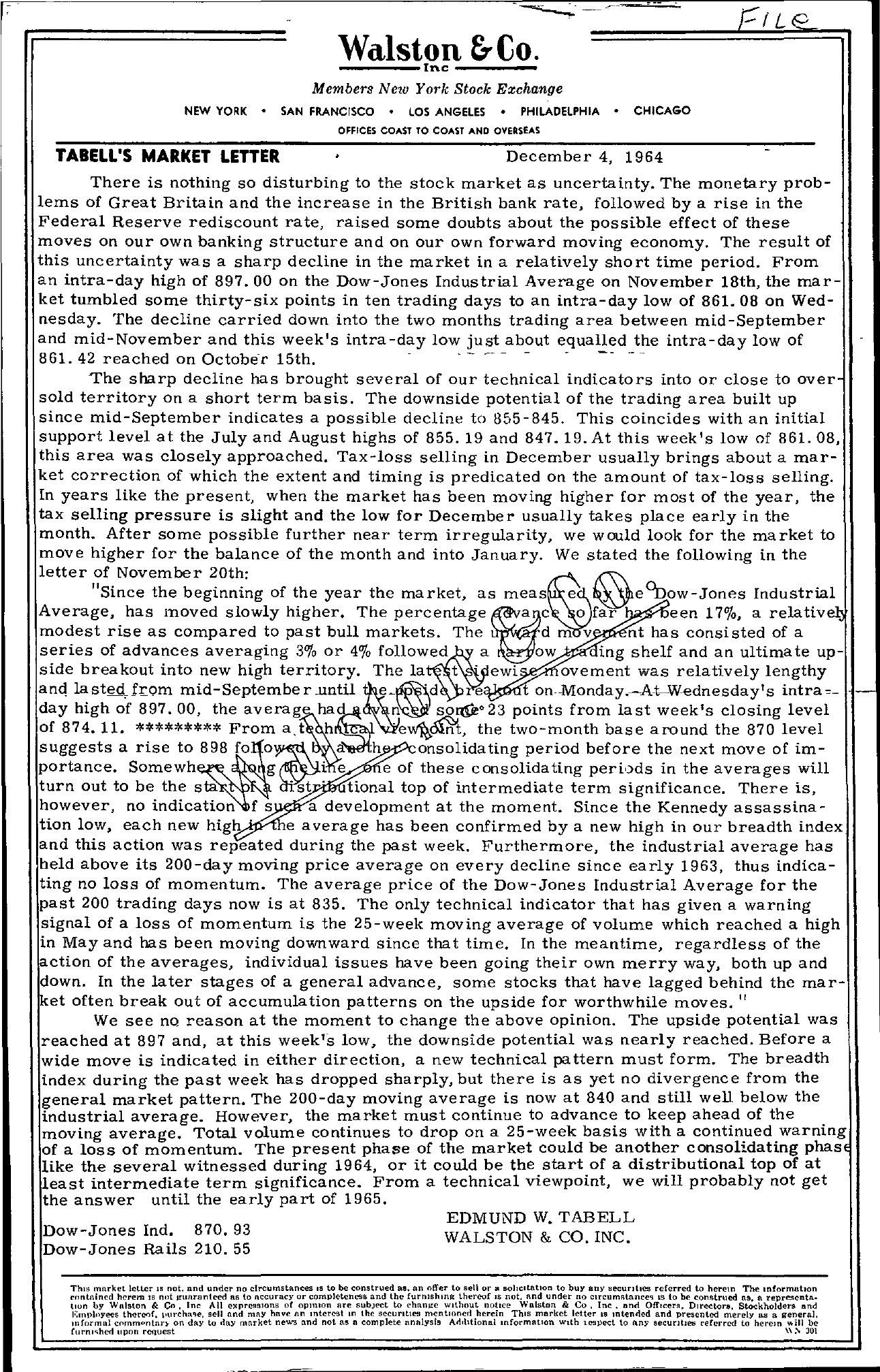 Walston &Co. Members New York Stock Exchange NEW YORK SAN FRANCISCO LOS ANGELES PHILADELPHIA CHICAGO OFFICES COAST TO COAST AND OVERSEAS TABELL'S MARKET LETTER December 4, 1964 There is nothing so disturbing to the stock market as uncertainty. The monetary prob- lems of Great Britain and the increase in the British bank rate, followed by a rise in the Federal Reserve rediscount rate, raised some doubts about the possible effect of these moves on our own banking structure and on our own forward moving economy. The result of this uncertainty was a sharp decline in the market in a relatively short time period. From an intra-day high of 897.00 on the Dow-Jones Industrial Average on November 18th, the mar- ket tumbled some thirty-six points in ten trading days to an intra-day low of 861. 08 on Wed- nesday. The decline carried down into the two months trading area between mid-September and mid-November and this week's intra-day low just about equalled the intra-day low of 861. 42 reached on October 15th. – — — – – – – – — The sharp decline has brought several of our technical indicators into or close to oversold territory on a short term basis. The downside potential of the trading area built up since mid-September indicates a possible decline to 855-845. This coincides with an initial support level at the July and August highs of 855.19 and 847. 19.At this week's low of 861. 08, this area was closely approached. Tax-loss selling in December usually brings about a mar- ket correction of which the extent and timing is predicated on the amount of tax-loss selling. In years like the present, when the market has been moving higher for most of the year, the tax selling pressure is slight and the low for December usually takes place early in the month. After some possible further near term irregularity, we would look for the market to move higher for the balance of the month and into January. We stated the following in the letter of November 20th Since the beginning of the year the market, as meas e Industrial Average, has moved slowly higher. The percentage e c 0 far een 17, a modest rise as compared to past bull markets. The d m v nt has consisted of a series of advances averaging 3 or 4 a ow ing shelf and an ultimate up- side breakout into new high territory. The la t – ewi ovement was relatively lengthy and lastedJrom mid-Septemberuntil e t on–Monday.-At-W-ednesday's intrao- — day high of of 874.11. 897.00,th e From a,t h points from last week's closing level the two-month base around the 870 level suggests a rise to fo h onsolidating period before the next move of im- portance. Somewh g i e e of these consolidating periods in the averages will turn out to be the sm . st' tional top of intermediate term significance. There is, however, no indication f s a development at the moment. Since the Kennedy assassina- tion low, each new high' e average has been confirmed by a new high in our breadth index and this action was repeated during the past week. Furthermore, the industrial average has held above its 200-day moving price average on every decline since early 1963, thus indica- ting no loss of momentum. The average price of the Dow-Jones Industrial Average for the past 200 trading days now is at 835. The only technical indicator that has given a warning signal of a loss of momentum is the 25-week moving average of volume which reached a high in May and has been moving downward since that time. In the meantime, regardless of the action of the averages, individual issues have been going their own merry way, both up and down. In the later stages of a general advance, some stocks that have lagged behind the mar- Iket often break out of accumulation patterns on the upside for worthwhile moves. We see nQ reason at the moment to change the above opinion. The upside potential was reached at 897 and, at this week's low, the downside potential was nearly reached. Before a wide move is indicated in either direction, a new technical pattern must form. The breadth index during the past week has dropped sharply, but there is as yet no divergence from the general market pattern. The 200-day moving average is now at 840 and still well below the industrial average. However, the market must continue to to ahea.d of the . moving average. Total volume continues to drop on a 25-week baSlS wlth a conhnued warmng of a loss of momentum. The present phase of the market could be another consolidating like the several witnessed during 1964, or it could be the start of a distributional top of at least intermediate term significance. From a technical viewpoint, we will probably not get the answer until the early part of 1965. Dow-Jones Ind. 870. 93 Dow-Jones Rails 210. 55 EDMUND W. TABELL WALSTON & CO. INC. ThiS market letter 19 not, and undcr no circumstances IS to be construed 8S. nn offer to sell or a soliCitation to buy Bny securltws referred to herem The mformatlon cnntnined herem IS not l.nmrantecd a6 to accuracy or completencss and the furnishing thereof IS not. Rnd under no clfcumBt.nncc'I IS to be construed as, B representa- tIOn by Wnlston &. Co, Inc All expreSSions of op18lOn nre subJeet to chnnlte Without notice Wnlston & Co, Inc, nnd Officers. Directors, Stockholders nnd Fmllinyees thereof sell nnd may have an 18ter('8t In the securatles mcntmncrl herein ThiS market letter IS 18lcnrled and presented merely ns a general. IIlfnrmal c('lmm.. on day to day market news and not as a complete nnniysis Arldltionnl mformatlon With 1e5JCCt to any securlhes referred to herein \\'iIl be fUTnl;hcrl upon request \\;0.. 301