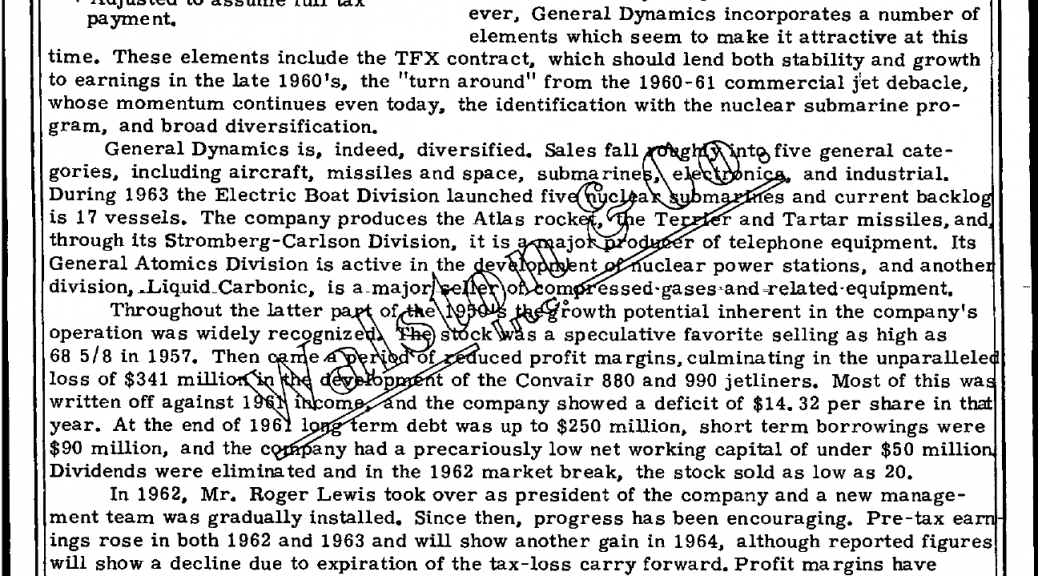 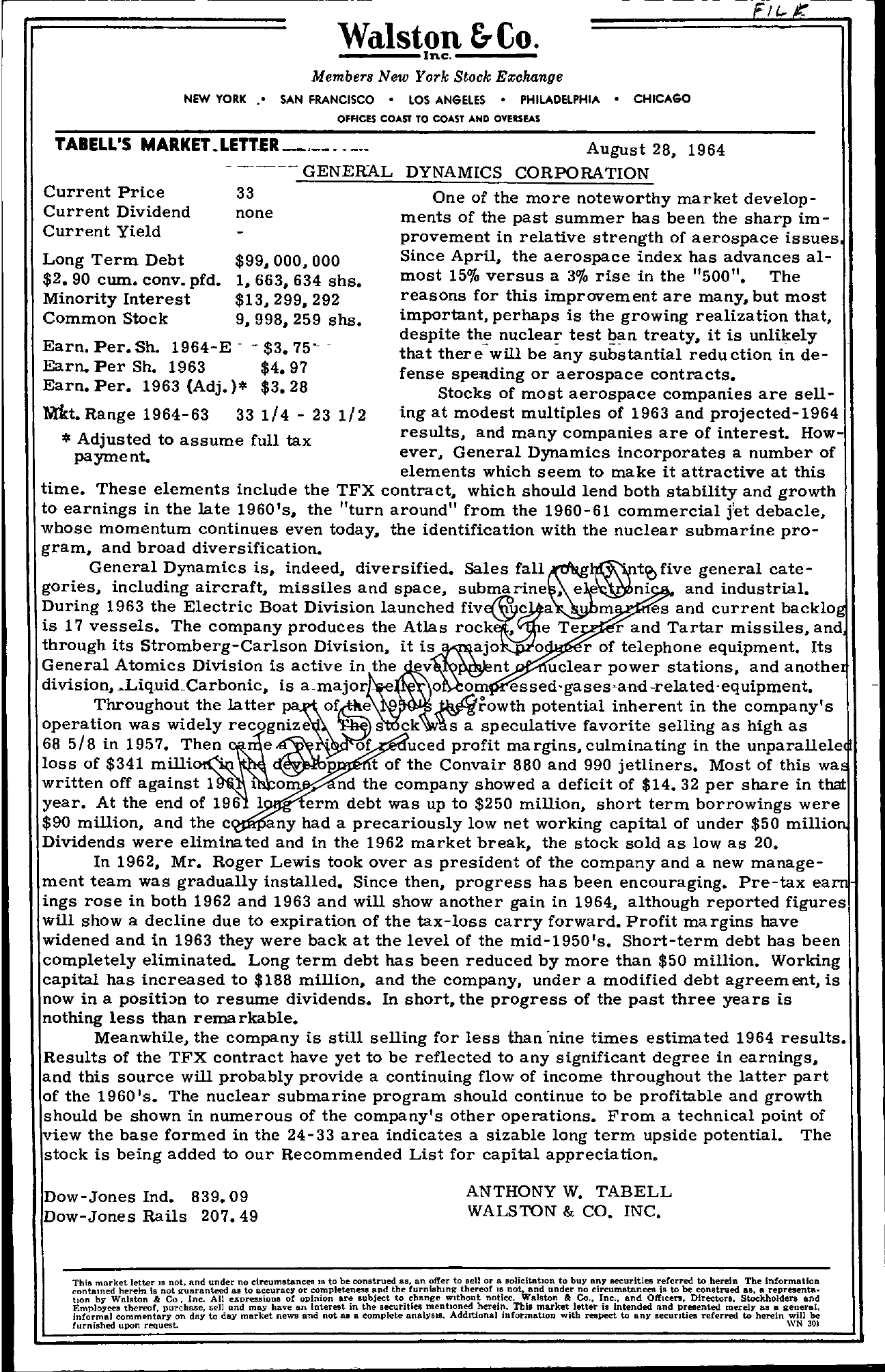 Walston &Co. Inc. Members New York Stock Exchange NEW YORK SAN FRANCISCO LOS ANGELES PHILADELPHIA CHICAGO OFFICES COAST TO COA.ST AND OVERSEAS TABELL'S MARKET.LETT.ER, —- August 28, 1964 – —- GENERAL DYNAMICS CORPORATION Current Price Current Dividend Current Yield 33 none One of the more noteworthy market develop- ments of the past summer has been the sharp improvement in relative strength of aerospace issues Long Term Debt 2. 90 cum. conv. pfd. Minority Interest Common Stock 99,000,000 1, 663, 634 shs. 13,299,292 9.998, 259 shs. Earn. Per.Sh. 1964-E – – 3. Earn. Per Sh. 1963 4.97 Earn. Per. 1963 (Adj.) 3.28 Since April, the aerospace index has advances al- most 15/0 versus a 3 rise in the 500. The reasons for this improvement are many, but most important, perhaps is the growing realization that, despite the nuclear test ban treaty, it is unlikely that be any substantial reduction in de- fense spending or aerospace contracts. Stocks of most aerospace companies are sell- Mfrt.Range 1964-63 331/4 – 23 1/2 Adjusted to assume full tax payment. ing at modest multiples of 1963 and projected-1964 results, and many companies are of interest. How- ever, General Dynamics incorporates a number of elements which seem to make it attractive at this time. These elements include the TFX contract, which should lend both stability and growth to earnings in the late 1960's, the turn around from the 1960-61 commercial fet debacle, whose momentum continues even today. the identification with the nuclear submarine program, and broad diversification. General Dynamics is, indeed, diversified. Sales general cate- gories, including aircraft. missiles and space, submarine e and industrial. During 1963 the Electric Boat Division launched m es and current backlo is 17 vessels. The company produces the Atlas rock. e Te r and Tartar missiles, and through its Stromberg-Carlson Division, it isejO 0 r of telephone equipment. Its General Atomics Division is active v nt uclear power stations, and anothe divisionpLiquid.Carbonic. is amajor – 0 om Throughout the latter e potential inherent in the company's operation was widely recognize s ck\v\;;; speculative favorite selling as high as 685/8 in 1957. Then of uced profit margins,culminating in the unparallele loss of 341 milli' t of the Convair 880 and 990 jetliners. Most of this wa written off against 1 1 0 m nd the company showed a deficit of 14. 32 per share in that year. At the end of 196 1 erm debt was up to 250 million, short term borrowings were 90 million, and the c any had a precariously low net working capital of under 50 millio Dividends were eliminated and in the 1962 market break, the stock sold as low as 20. In 1962, Mr. Roger Lewis took over as president of the company and a new manage- ment team was gradually installed. Since then, progress has been encouraging. Pre-tax ea ings rose in both 1962 and 1963 and will show another gain in 1964. although reported figures will show a decline due to expiration of the tax-loss carry forward. Profit margins have widened and in 1963 they were back at the level of the mid-1950's. Short-term debt has been completely eliminated. Long term debt has been reduced by more than 50 million. Working capital has increased to 188 million. and the company, under a modified debt agreement, is now in a positin to resume dividends. In short, the progress of the past three years is nothing less than remarkable. Meanwhile, the company is still selling for less than 'nine times estimated 1964 results. Results of the TFX contract have yet to be reflected to any significant degree in earnings, and this source will probably provide a continuing flow of income throughout the latter part of the 1960's. The nuclear submarine program should continue to be profitable and growth should be shown in numerous of the company's other operations. From a technical point of view the base formed in the 24-33 area indicates a sizable long term upside potential. The stock is being added to our Recommended List for capital appreciation. Dow-Jones Ind. 839.09 Dow-Jones Rails 207.49 ANTHONY W. TABELL WALSTON & CO. INC. This market letter 18 not, and under no eireumstance'll 18 to be construed as, an ofter to sell or a 801ieltatlon to buy D!'y securities referred to herein The Information contained herem is not guaranteed 8S to accurney or completene!l8 and the furnishing thereof 16 not, and under no circumstances is to be construed as, a representa- tion by Walston & Co Inc. All cJpre!lsions of opinion are subject to ehl'lnge wltbout notice. Walston Co., Inc., and Offlcel'll, Directore, Stoekholders and Employees thereof sell and may have an interest in the securities mentioned herein. This market letter ie intended. Ilnd presented merely 8e a general, on day to day market news and not as a complete analySIS. Additional information with respect to Bny eecurlties referred to herein will be furnished upon request. WN 301