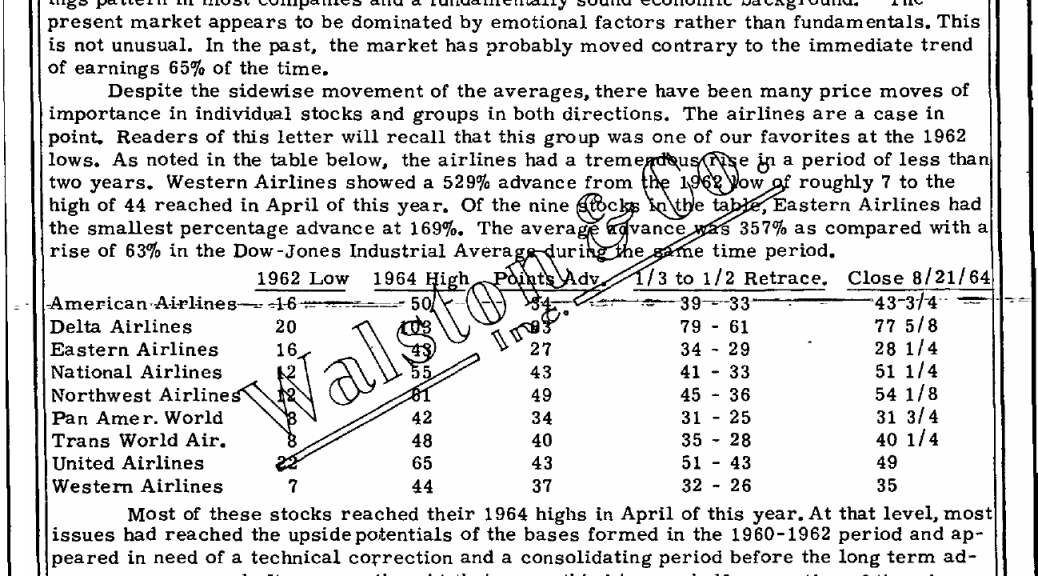 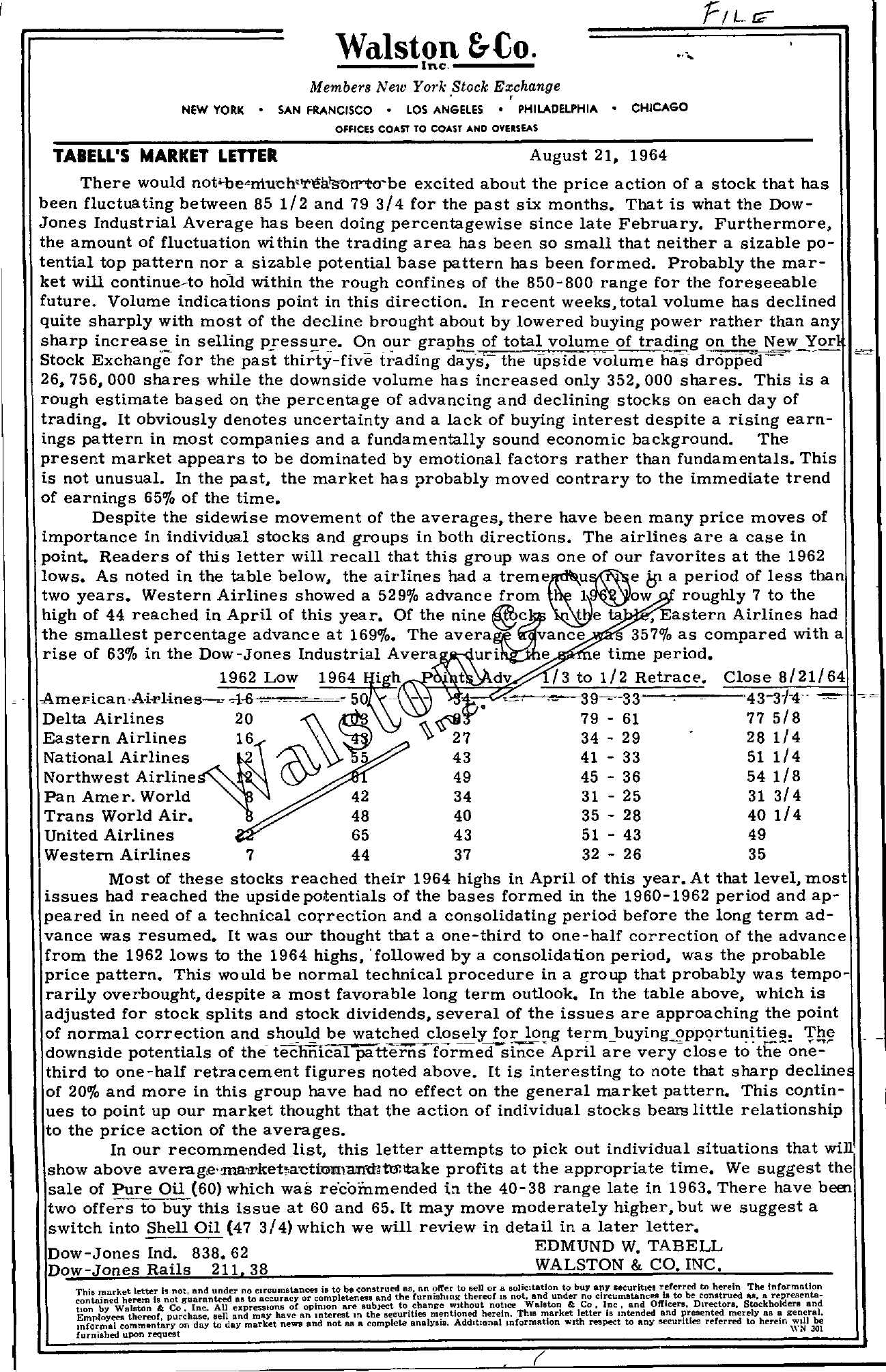 Walston & Co. … Members New YOI'k ,Stock Ex,change NEW YORK SAN FRANCISCO LOS ANGELES PHILADELPHIA CHICAGO OFFICES COAST TO COAST AND OVERSEAS TABELL'S MARKET LEnER August 21, 1964 There would excited about the price action of a stock that has been fluctuating between 851/2 and 793/4 for the past six months. That is what the Dow- Jones Industrial Average has been doing percentagewise since late February. Furthermore, the amount of fluctuation within the trading area has been so small that neither a sizable po- tential top pattern nor a sizable potential base pattern has been formed. Probably the mar- ket will continue-to hold within the rough confines of the 850-800 range for the foreseeable future. Volume indications point in this direction. In recent weeks, total volume has declined quite sharply with most of the decline brought about by lowered buying power rather than any sharp increase in selling pressure. On our graphs of total volume of trading on the New Yor Stock Exchange for the past thirty-five trading days', the upside volume has dropped — – 26,756,000 shares while the downside volume has increased only 352,000 shares. This is a rough estimate based on the percentage of advancing and declining stocks on each day of trading. It obviously denotes uncertainty and a lack of buying interest despite a rising earn- ings pattern in most companies and a fundamentally sound economic background. The present market appears to be dominated by emotional factors rather than fundamentals. This is not unusual. In the past, the market has probably moved contrary to the immediate trend of earnings 650/0 of the time. Despite the sidewise movement of the averages, there have been many price moves of importance in individual stocks and groups in both directions. The airlines are a case in point. Readers of this letter will recall that this group was one of our favorites at the 1962 lows. As noted in the table below, the airlines had a a period of less than two years. Western Airlines showed a 529 advance from 1 ow roughly 7 to the high of 44 reached in April of this year. Of the nine t eta, Eastern Airlines had the smallest percentage advance at 1690/0. The avera as compared with a rise of 63 in the Dow-Jones Industrial e time period. 196' Low /, to 1/' Re' C10 8/21/64 . .. – .. –. National Airlines Northwest Airline Pan Ame r. World Trans World Air. United Airlines Western Airlines 7 43 49 42 34 48 40 65 43 44 37 34 41- 33 45 – 36 31 – 25 35 – 28 51 – 43 32 – 26 511/4 541/8 31 3/4 401/4 49 35 Most of these stocks reached their 1964 highs in April of this year. At that level, most issues had reached the upside potentials of the bases formed in the 1960-1962 period and ap- peared in need of a technical cOrrection and a consolidating period before the long term ad- vance was resumed. It was our thought that a one-third to one-half correction of the advance from the 1962 lows to the 1964 highs, 'followed by a consolidation period, was the probable price pattern. This would be normal technical procedure in a group that probably was tempo- rarily overbought, despite a most favorable long term outlook. In the table above, which is adjusted for stock splits and stock dividends, several of the issues are approaching the point of normal correction and shou ld be watc..h.. ed closelyfo,r….,.,l…o.–.n.. g ter-m-buying-.–o pportunit,i..es. T… h'etr downside potentials of the teclinical patterns formed since April are very close to the one- third to one-half retracement figures noted above. It is interesting to note that sharp decline, of 200/0 and more in this group have had no effect on the general market pattern. This cO)ltin- ues to point up our market thought that the action of individual stocks beam little relationship to the price action of the averages. In our recommended list, this letter attempts to pick out individual situations that will show above profits at the appropriate time. We suggest the sale of Pure Oil (60) which was re'commended il. the 40-38 range late in 1963. There have been two offers to buy this issue at 60 and 65. It may move moderately higher, but we suggest a switch into Shell Oil (47 3/4) which we will review in detail in a later letter. Dow-Jones Ind. 838.62 Dow-Jones Rails 211.38 EDMUND W. TABELL WALSTON & CO. INC. This market letter is flot, Dnd under no circumstances is to be construed DS, an to sell or contained herem 111 not guaranteed as to accuracy or completeness and the furnlShlrilt thereof So solicitation to buy IS not, and under no Dny securities ref circumstances ill etorrebde to herein construed The in!ormntlon 8.8, a representa- tIOn by Walston & Co. Inc., All expressions of opimon are BubJeCt, to change Without notice Walston & Co. Inc. and Offlcen. Directors, Stockholders and E I yees thereof purchase sell and may have an Interest In the lIecurities mentioned herein. ThiS market letter Is Intended and presented merely as a general. Jt;on day to day market neW8 and not as a complete analysis. Additional mformation with respect to any securities referred to herein furnished upon request (