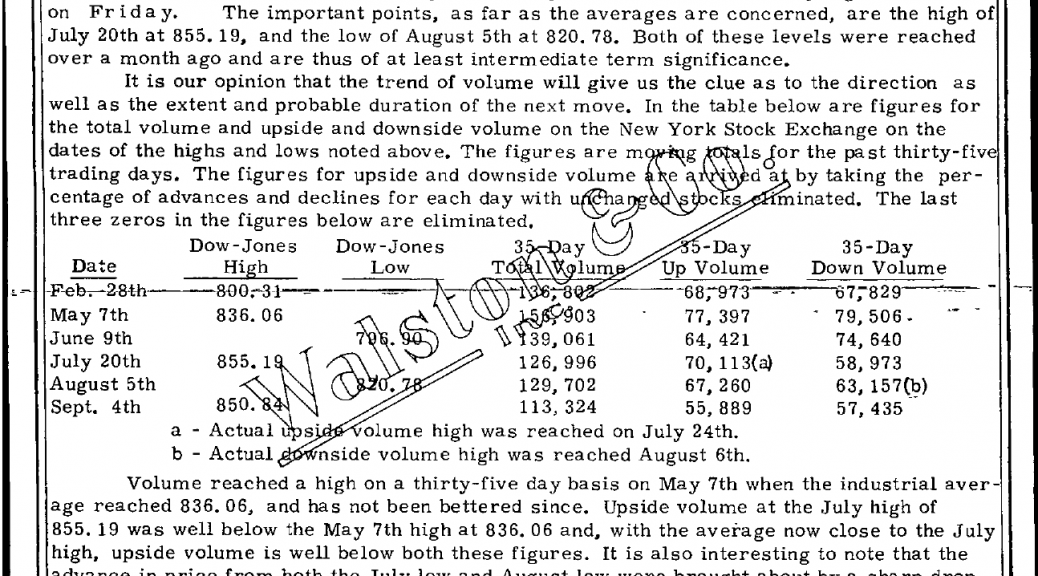 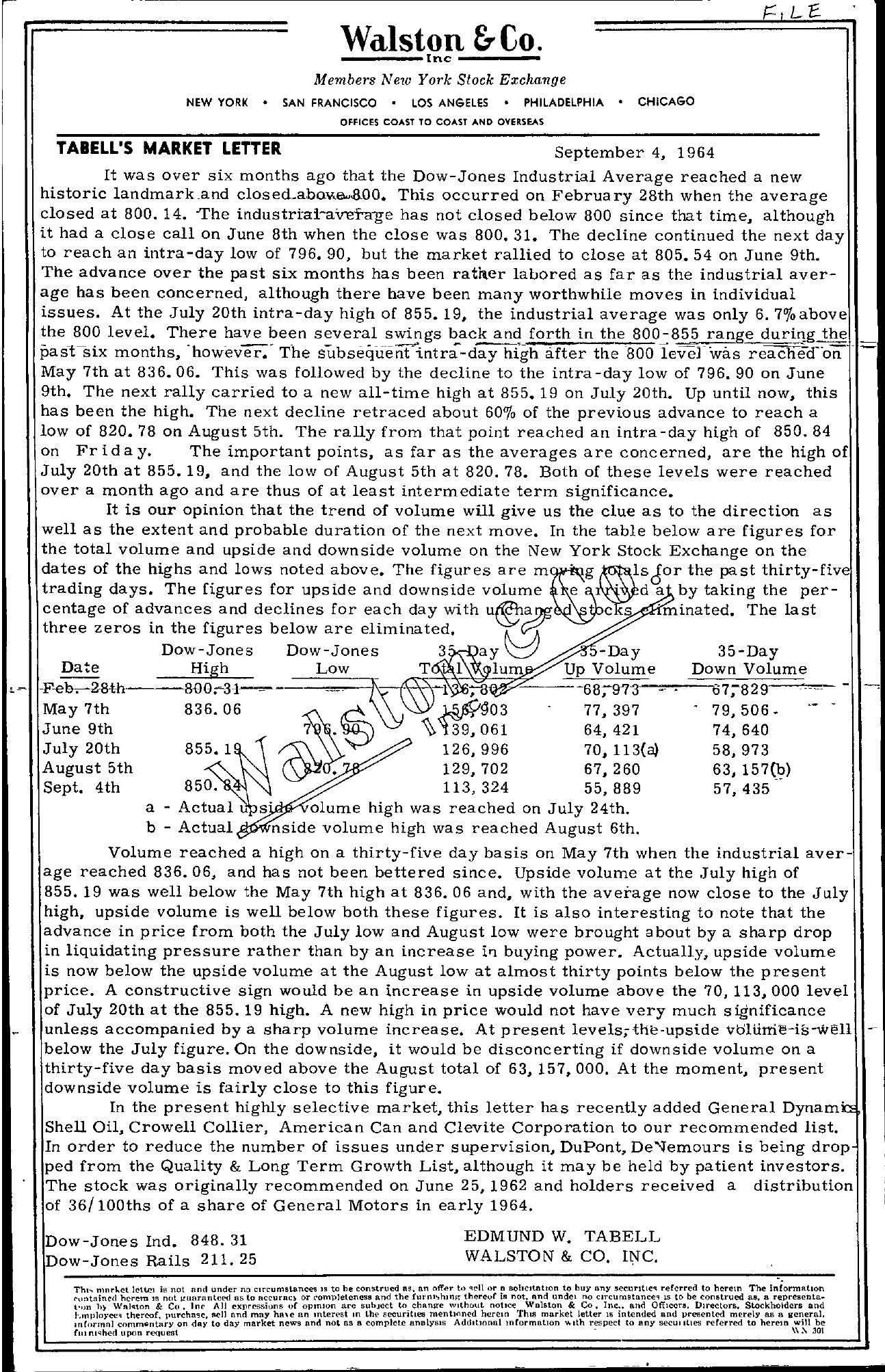 Walston Inc &Co. Members New York Stock Exchange NEW YORK SAN FRANCISCO LOS ANGELES PHILADELPHIA CHICAGO OFFICES COAST TO COAST AND oveRSEAS TABELL'S MARKET LETTER September 4, 1964 It was over six months ago that the Dow-Jones Industrial Average reached a new historic landmarkand closedabo\'ie…&OO. This occurred on February 28th when the average closed at 800. 14. The industrrai-av-era—ge has not closed below 800 since that time, although it had a close calIon June 8th when the close was 800.31. The decline continued the next day to reach an intra-day low of 796.90, but the market rallied to close at 805.54 on June 9th. The advance over the past six months has been ratn.er labored as far as the industrial aver- age has been concerned, although there have been many worthwhile moves in individual issues. At the July 20th intra-day high of 855.19, the industrial average was only 6. 70/. above the 800 level. There have been several swings back and forth in the 800-855 range durin,g the past-six months, -however. The subsequentintnl-day high after the 800 level was reachea–on – May 7th at 836.06. This was followed by the decline to the intra-day low of 796.90 on June 9th. The next rally carried to a newall-time high at 855. 19 on July 20th. Up until now, this has been the high. The next decline retraced about 600/. of the previous advance to reach a low of 820.78 on August 5th. The rally from that point reached an intra-day high of 850.84 on Fr ida y. The important points, as far as the averages are concerned, are the high of July 20th at 855.19, and the low of August 5th at 820.78. Both of these levels were reached over a month ago and are thus of at least intermediate term significance. It is our opinion that the trend of volume will give us the clue as to the direction as well as the extent and probable duration of the next move. In the table below are figures for the total volume and upside and downside volume on the New York Stock Exchange on the dates of the highs and lows noted above. The figures are the past thirty-five trading days. The figures for upside and downside volume e d a by taking the per- centage of advances and declines for each day with three zeros in the figures below are eliminated. ' Cj c s minated. The last Dow-Jones Dow-Jones 3 -Day Date -High Low T I lum Up Volume June 9th July 20th 0\7. . \y 139; 061 126,996 64,421 70,113(a) August 5th 129,702 67,260 Sept. 4th 850. 113,324 55,889 a – Actual s olume high was reached on July 24th. b – Actual nside volume high was reached August 6th. 35-Day Down Volume 74,640 58,973 63,157(b) 57,435– Volume reached a high on a thirty-five day basis on May 7th when the industrial average reached 836.06, and has not been bettered since. Upside volume at the July high of 855.19 was well below the May 7th high at 836.06 and, with the average now close to the JLlly high, upside volume is well below both these figures. It is also interesting to note that the advance in price from both the July low and August low were brought about by a sharp drop in liquidating pressure rather than by an increase i'1 buying power. Actually, upside volume is now below the upside volume at the August low at almost thirty points below the present price. A constructive sign would be an increase in upside volume above the 70,113,000 level of July 20th at the 855.19 high. A new high in price would not have very much significance unless accompanied by a sharp volume increase. At presen-t levels,-the-upside voliirrHHs-well below the July figure. On the downside, it would be disconcerting if downside volume on a thirty-five day basis moved above the August total of 63,157,000. At the moment, present downside volume is fairly close to this figure. In the present highly selective market, this letter has recently added General Dynam' Shell Oil, Crowell Collier, American Can and Clevite Corporation to our recommended list. In order to reduce the number of issues under supervision, DuPont, De'lemours is being drop ped from the Quality & Long Term Growth List, although it may be held by patient investors. The stock was originally recommended on June 25,1962 and holders received a distribution of 36/100ths of a share of General Motors in early 1964. Dow-Jones Ind. 848.31 Dow-Jones Rails 211. 25 EDMUND W. TABELL WALSTON & CO. INC. nHlr\..et lctWl is not flnd under no circumstances IS to be construed as, an offer to ;(1\ or a SoliCItatiOn to buy ony referred to herem The informatIOn rlltllincd herem IS n(lt I!ulranlced us to accurnc) or rompletcncss and the furnl.,hml! thereof is not, and undCI no lS to be con!!trued tiS, a representa. t'lm \VI\1'1ton & C(. In(' All cxpressions of opinion nrc suhJect to change wlthuut notice \Volston & Co. Inc. and Officer!!!, Directors, Stockholders and J.,mJlio)'C'C'i thereof, ll!11 ani! may hale an mterest m the sceuritles mentHlned herem ThiS market letter 16 intended and presented merely as a mformnl commontary on day to day market ncws and not as a complete anaIY!!I!! Addillonal mformatlOn …. Ith respect to any SecUIIllCS referred to herem Will be flU nL'ihed upon request . \\-.. 30\