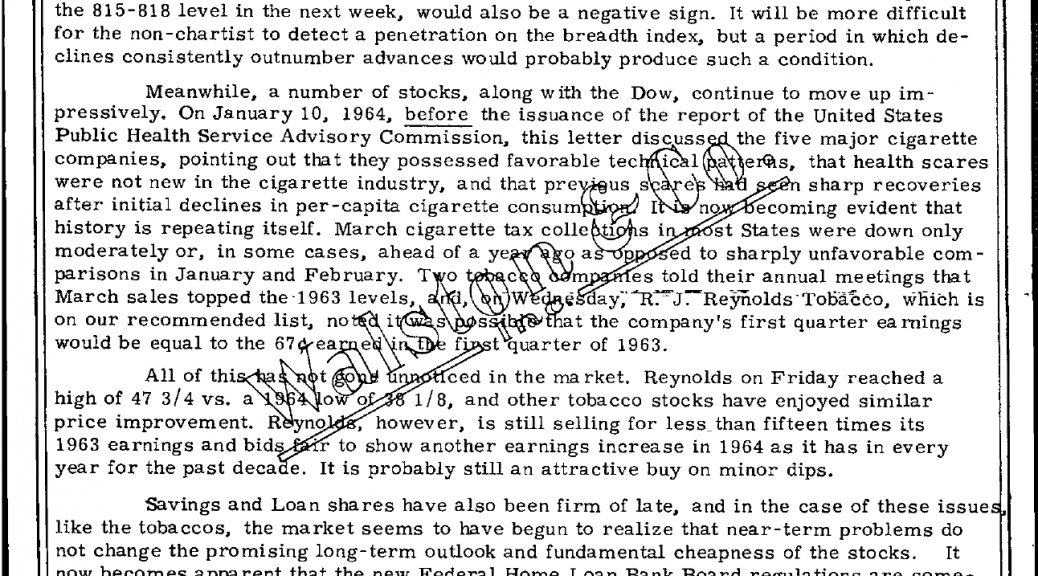 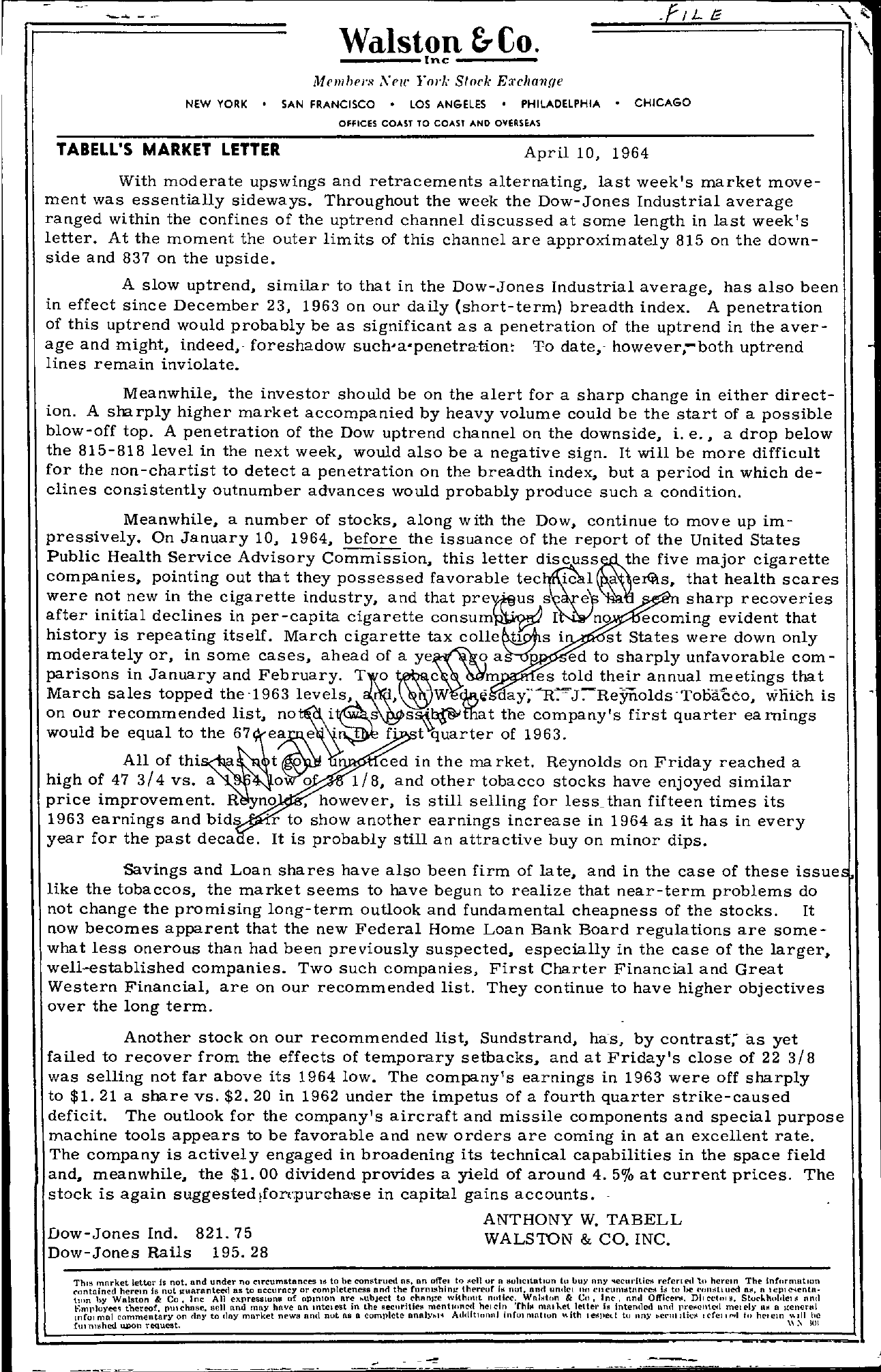 –…… Walston &Co. Inc – – – – – rol'''Memilel',. XCIl' Stock Euilanflf JIL IE NEW YORK SAN FRANCISCO LOS ANGELES PHILADELPHIA CHICAGO OFFICES COAST TO COAST AND OVERSEAS TABELL'S MARKET LETTER April 10, 1964 With moderate upswings and retracements alternating, last week's market move- ment was essentially sideways. Throughout the week the Dow-Jones Industrial average ranged within the confines of the uptrend channel discussed at some length in last week's letter. At the moment the outer limits of this channel are approximately 815 on the downside and 837 on the upside. A slow uptrend, similar to that in the Dow-Jones Industrial average, has also been in effect since December 23, 1963 on our daily (short-term) breadth index. A penetration of this uptrend would probably be as significant as a penetration of the uptrend in the average and might, indeed, foreshadow such-a'penetration 1'0 date, however,-both uptrend lines remain inviolate. Meanwhile, the investor should be on the alert for a sharp change in either direction, A sharply higher market accompanied by heavy volume could be the start of a possible blow-off top. A penetration of the Dow uptrend channel on the downside, i. e., a drop below the S15-81B level in the next week, would also be a negative sign. It will be more difficult for the non -chartist to detect a penetration on the breadth index, but a period in which de- clines consistently outnumber advances would probably produce such a condition. Meanwhile, a number of stocks, along with the Dow, continue to move up im- pressively. On January 10, 1964, before the issuance of the report of the United States Public Health Service Advisory Commission, this letter five major cigarette companies, pointing out that they possessed favorable 1 a eN\.s, that health scares were not new in the cigarette industry, and that e sharp recoveries after initial declines in per-capita cigarette I no ecoming evident that history is repeating itself. March cigarette tax i st States were down only mOderately or, in some cases, ahead of a ed to sharply unfavorable com- parisons in January and February. March sales topped the'1963 levels, 'W.W m es told their annual meetings that 9tR,\i oay;''''R7J-Reynolds'Tooacco, wnich is on our recommended list, the company's first quarter earnings would be equal to 67 f' t quarter of 1963. All of thi t ced in the rna rket. Reynolds on Friday reached a high of 47 3/4 vs. a 00 1/8, and other tobacco stocks have enjoyed similar price improvement. R no ,however, is still selling for less than fifteen times its 1963 earnings and bids r to show another earnings increase in 1964 as it has in every year for the past deca e. It is probably still an attractive buy on minor dips. Savings and Loan shares have also been firm of late, and in the case of these issue! like the tobaccos, the market seems to have begun to realize that near-term problems do not change the promising long-term outlook and fundamental cheapness of the stocks. It now becomes apparent that the new Federal Home Loan Bank Board regulations are some- what less onerous than had been previously suspected, especially in the case of the larger, well-established companies. Two such companies, First Charter Financial and Great Western Financial, are on our recommended list. They continue to have higher objectives over the long term. Another stock on our recommended list, Sundstrand, ha's, by contrast; as yet failed to recover from the effects of temporary setbacks, and at Friday's close of 22 3/S was selling not far above its 1964 low. The company's earnings in 1963 were off sharply to 1. 21 a share vs. 2. 20 in 1962 under the impetus of a fourth quarter strike-caused deficit. The outlook for the company's aircraft and missile components and special purpose machine tools appears to be favorable and new orders are coming in at an excellent rate. The company is actively engaged in broadening its technical capabilities in the space field and, meanwhile, the 1. 00 dividend provides a yield of around 4.5 at current prices, The stock is again suggested,forcpurchase in capital gains accounts. Dow-Jones Ind. B21. 75 Dow-Jones Rails 195.2S ANTHONY W. TABELL WALSTON & CO. INC. Th t1 I-n k t letter Is not herein Is not nnd under no cu'cumstances III to be construed os, on offel to ell or as to uccurncy or contJlleteness and the tUl'nl!!hinj! thereut 0 solicitation til buy ill nut, nnd un.\el 1!1J nny …eeUl'ltlell Ii'!ctteurtbede til herem The intrmntlOn all, 1\ lelll -lentil Walston & Co Inc All ('XllreSS1Unl! IIf OPInion Rre to ('hHn)!e withllut nutit'(', & Cu, Inc, ond Olflcetll, Dhectnls. Stud,hut.tel nnd thereof on doy sell Rnd mny hnve an Intclest in to tiny mnrket news nnd nut fiB a the secllritie.. complete mentlUned helcin 'Chill mflll..et lettet' is inten(led AtldltlnnnJ inful nUltmn ith lelJled to IIOY 1111(1 ..ctlIIlticII melcly II )!encflti Idell,..t tn hClcln ulmllhed uPOn 1equt'&t.