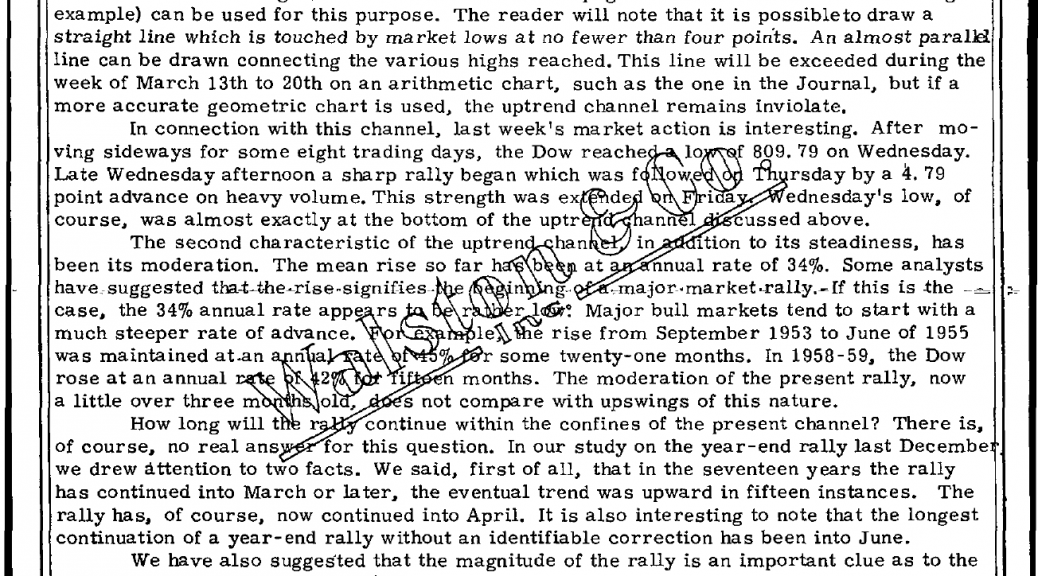 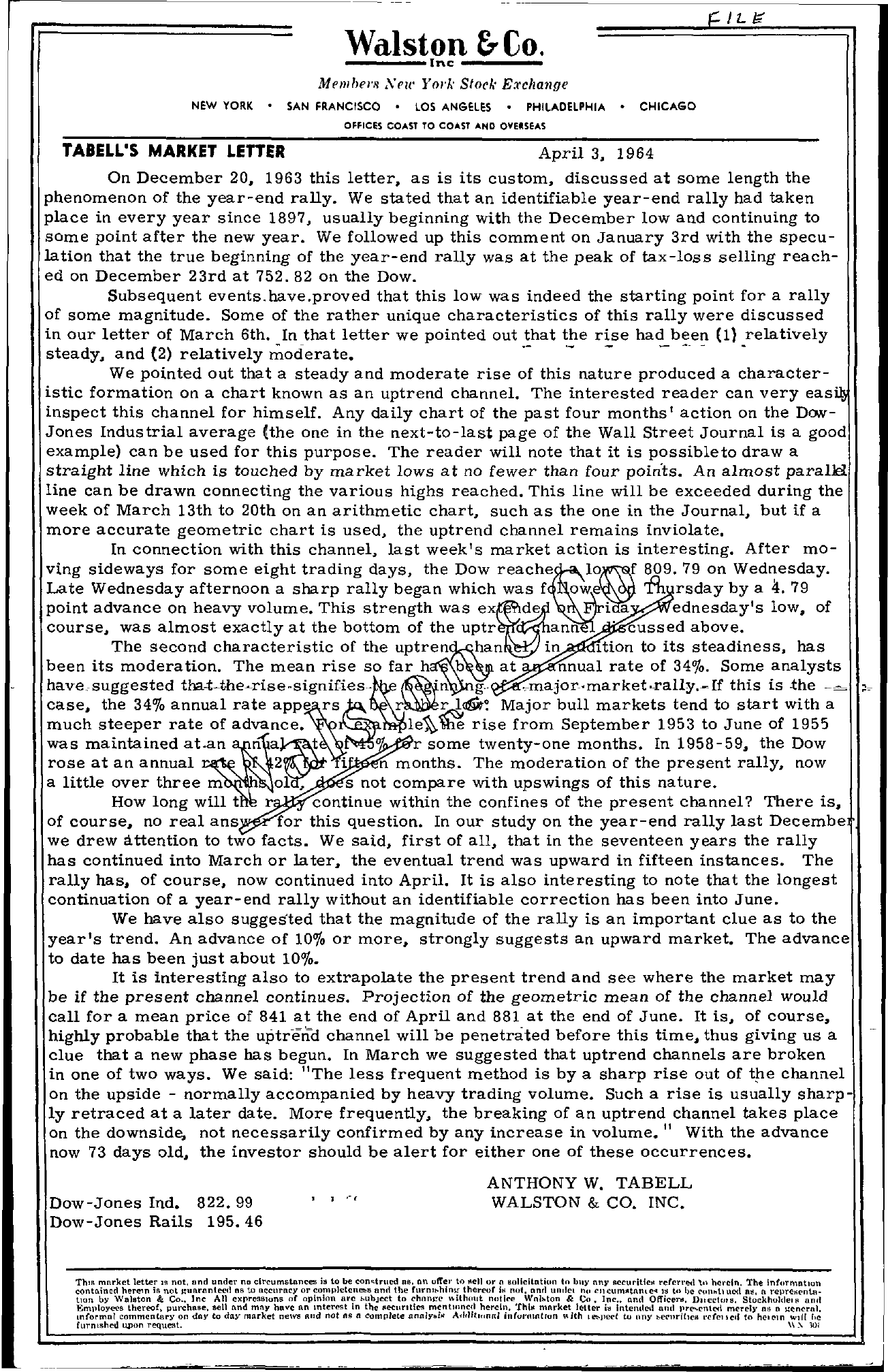 .———————– — Walston &Co. —–Inc —- SrII' rOl'k Stock Erchange I L J;; NEW YORK SAN FRANCISCO LOS ANGELES PHILADELPHIA CHICAGO OFFICES COAST TO COAST AND OVERSEAS TABELL'S MARKET LETTER April 3, 1964 On December 20, 1963 this letter, as is its custom, discussed at some length the phenomenon of the year-end rally. We stated that an identifiable year-end rally had taken place in every year since 1897, usually beginning with the December low and continuing to some point after the new year. We followed up this comment on January 3rd with the specu- lation that the true beginning of the year-end rally was at the peak of tax-loss selling reach- ed on December 23rd at 752.82 on the Dow. Subsequent events.have.proved that this low was indeed the starting point for a rally of some magnitude. Some of the rather unique characteristics of this rally were discussed in our letter of March 6th. In that letter we pOinted out that the rise had been (l) relatively steady, and (2) relatively moderate. .- – – – — – We pointed out that a steady and moderate rise of this nature produced a character- istic formation on a chart known as an uptrend channel. The interested reader can very eas' inspect this channel for himself. Any daily chart of the past four months' action on the Do.v- Jones Industrial average the one in the next-to-last page of the Wall Street Journal is a good example) can be used for this purpose. The reader will note that it is possible to draw a straight line which is touched by market lows at no fewer than four points. An almost parallel line can be drawn connecting the various highs reached. This line will be exceeded during the week of March 13th to 20th on an arithmetic chart, such as the one in the Journal, but if a more accurate geometric chart is used, the uptrend channel remains inviolate. In connection with this channel, last week's market action is interesting. After mo- ving sideways for some eight trading days, the Dow Late Wednesday afternoon a sharp rally began which was f ow f8h09.r7s9daoyn Wednesday. by a 4. 79 point advance on heavy volume. This strength was exae i a ednesday's low, of course, was almost exactly at the bottom of the uptr ann' cussed above. The second characteristic of the han in 1tion to its steadiness, has been its moderation. The mean rise so far h b at nnual rate of 340/0. Some analysts have.-suggested g.. this is -the – '- case, the 340/0 annual rate much steeper rate of advance. Major bull markets tend to start with a rise from September 1953 to June of 1955 was maintained n some twenty-one months. In 1958-59, the Dow rose at an annual 2 i n months. The moderation of the present rally, now a little over three m 01 , s not compare with upswings of this nature. How long will t r continue within the confines of the present channel There is, of course, no real ans for this question. In our study on the year-end rally last Decembe we drew attention to two facts. We said, first of all, that in the seventeen years the rally has continued into March or later, the eventual trend was upward in fifteen instances. The rally has, of course, now continued into April. It is also interesting to note that the longest continuation of a year-end rally without an identifiable correction has been into June. We have also suggested that the magnitude of the rally is an important clue as to the year's trend. An advance of 100/0 or more, strongly suggests an upward market. The advance to date has been just about 100/0. It is interesting also to extrapolate the present trend and see where the market may be if the present channel continues. Projection of the geometric mean of the channel would call for a mean price of 841 at the end of April and 881 at the end of June. It is, of course, highly probable that the uptrend channel will be penetrated before this time, thus giving us a clue that a new phase has begun. In March we suggested that uptrend channels are broken in one of two ways. We said The less frequent method is by a sharp rise out of tre channel On the upside – normally accompanied by heavy trading volume. Such a rise is usually sharp- ly retraced at a later date. More frequently, the breaking of an uptrend channel takes place on the downside, not necessarily confirmed by any increase in volume. With the advance now 73 days old, the investor should be alert for either one of these occurrences. Dow-Jones Ind. 822.99 Dow-Jones Rails 195.46 , J , ( ANTHONY W. TABELL WALSTON & CO. INC. Thll; mnrket letter IS not, lind under no circumstnnces is to be eon..truerl 0&, on utrCl' to lIell or n liolicitatiun to bll)' nny sec\lrit!CII referl'ed \tI herein. The Information contninc(1 herem is not j.tuarnntecrllls to necllrney or eomplelene.s and the fllrOlt-hinj.! thereof flot. nnr! Untlel nco ('11 111 to be ('(lllhtl ned n lIOn by Walston & Co., Jne All cxprCSSlOns of opinion al'e to ehanl.!e \\ith(lllt nutlee Wnb.ton & Co. Ine.. ami DllcctOlS, Stoekholdet!l RIlII thereof, pUlChasc, Bell nnd mny havc an mterest In the men tInned Thill market letter ill Intendc,1 nnd pre..ented merely no; n I-enerlii. mformnl commentary on day to day market news and not as a complete llnnly;.il1 A,I,lItlflllltllfl(ut'nllltlOn \\ith Ie-peel to tiny M.'('nritJes I'c(ellel( to helem WIll he furnIshed UJ)on request. \\.\ 101