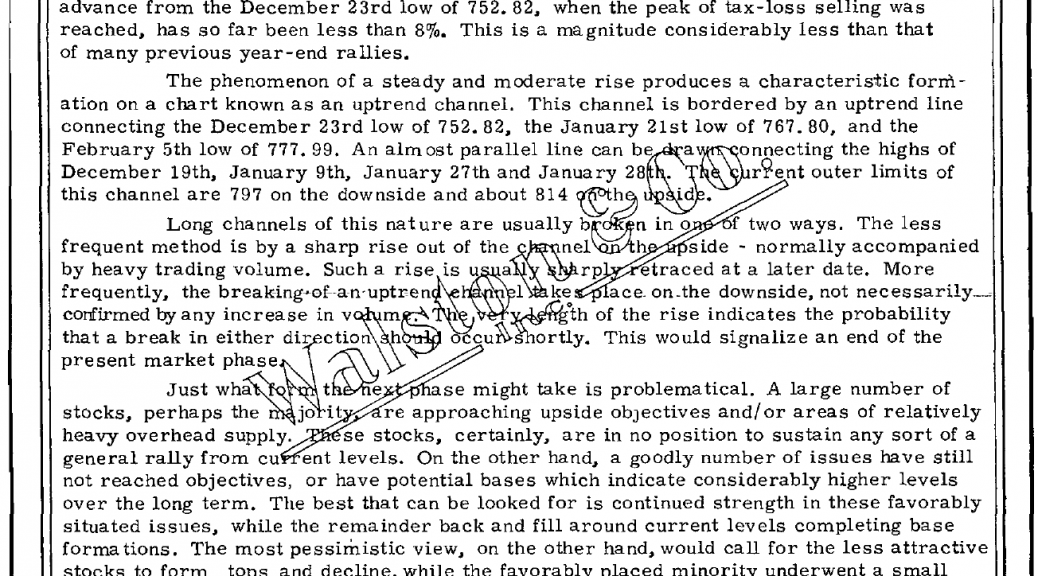 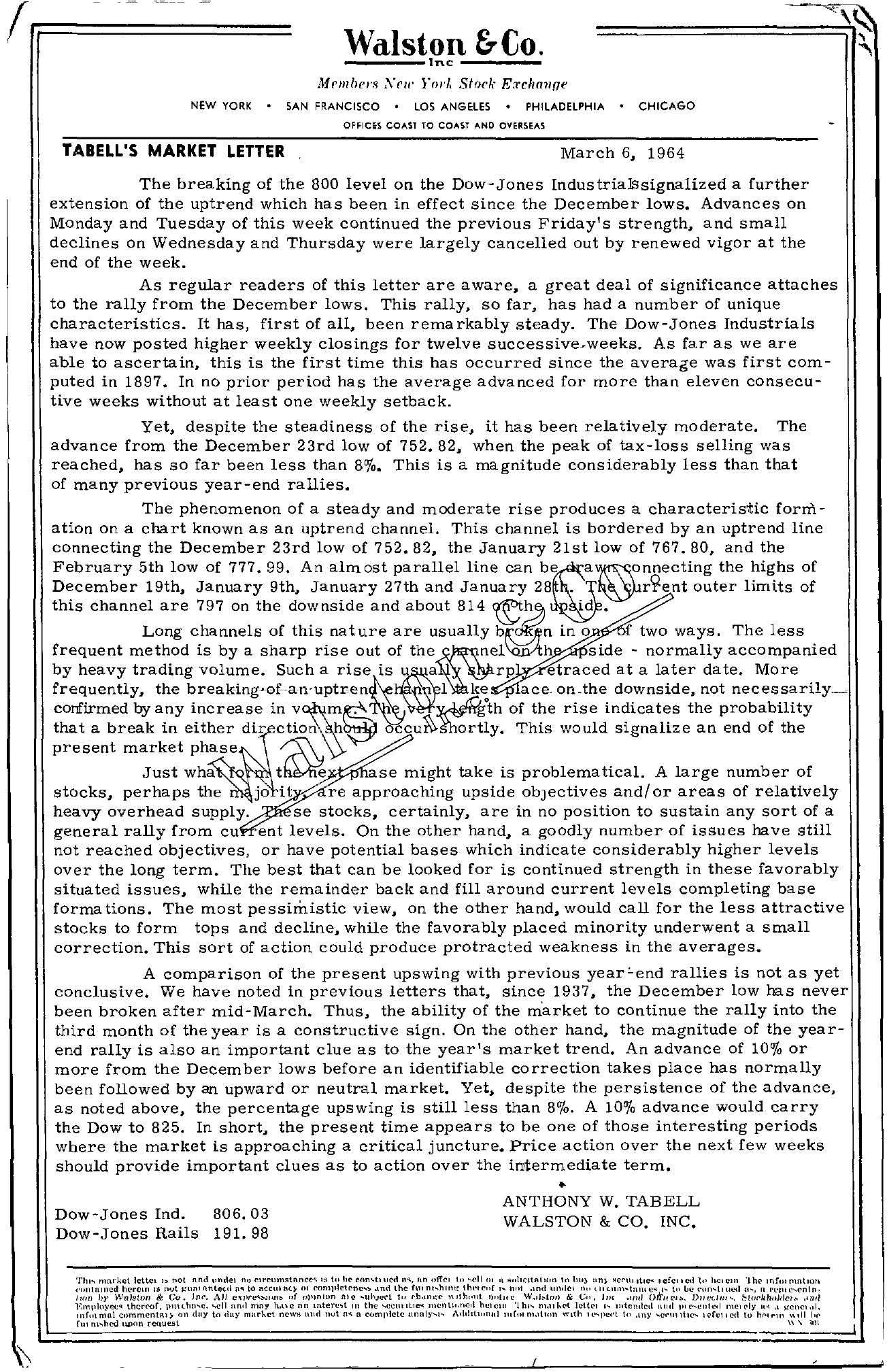 (r; Walston &Co. – Inc 1I1ellllel'8 Xell' 'n', Sind.. Euilu1I(Je NEW YORK SAN FRANCISCO LOS ANGElES PHILADELPHIA CHICAGO OfFICES COAST TO COAST AND OVERSEAS TABELL'S MARKET LETTER March 6, 1964 The breaking of the 800 level on the Dow-Jones Industrialssignalized a further extension of the uptrend which has been in effect since the December lows. Advances on Monday and Tuesday of this week continued the previous Friday's strength, and small declines on Wednesday and Thursday were largely cancelled out by renewed vigor at the end of the week. As regular readers of this letter are aware, a great deal of significance attaches to the rally from the December lows. This rally, so far, has had a number of unique characteristics. It has, first of all, been rema rkably steady. The Dow-Jones Industrials have now posted higher weekly closings for twelve successive,weeks. As fa.r as we are able to ascertain, this is the first time this has occurred since the average was first computed in 1897. In no prior period has the average advanced for more than eleven consecutive weeks without at least one weekly setback. Yet, despite the steadiness of the rise, it has been relatively moderate. The advance from the December 23rd low of 752.82, when the peak of tax-loss selling was reached, has so far been less than 8. This is a magnitude considerably less than that of many previous year-end rallies. The phenomenon of a steady and moderate rise produces a characteristic form- ation on a chart known as an uptrend channel. This channel is bordered by an uptrend line connecting the December 23rd low of 752.82, the January 21st low of 767.80, and the February 5th low of 777.99. An almost parallel line can the highs of December 19th, January 9th, January 27th and January 28 outer limits of this channel are 797 on the downside and about 814 id. Long channels of this nature are usually in 0 f two ways. The less frequent method is by a sharp rise out of side – normally accompanied by heavy trading volume. Such a rise rp etraced at a later date. More frequently, the 1 ace. on.the downside, not confirmed by any increase in of the rise indicates the probability that a break in either dir ction This would signalize an end of the present market phase /)\, Just wha ase might take is problematical. A large number of stocks, perhaps the jo it re approaching upside obJectives and/or areas of relatively heavy overhead supply. se stocks, certainly, are in no position to sustain any sort of a general rally from cu ent levels. On the other ha.nd, a gOOdly number of issues have still not reached objectives, or have potential bases which indicate considerably higher levels over the long term. The best that can be looked for is continued strength in these favorably situated issues, while the remainder back and fill around current levels completing base forma tions. The most pessimistic view, on the other hand, would call for the less attractive stocks to form tops and decline, while the favorably placed minority underwent a small correction. This sort of action could produce protracted weakness in the averages. A comparison of the present upswing with previous yearCend rallies is not as yet conclusive. We have noted in previous letters that, since 1937, the December low has never been broken after mid-March. Thus, the ability of the market to continue the rally into the third month of the year is a constructive sign. On the other hand, the magnitude of the year- end rally is also an important clue as to the year's market trend. An advance of 10 or more from the December lows before an identifiable correction takes place has normally been followed by an upward or neutral market. Yet, despite the persistence of the advance, as noted above, the percentage upswing is still less than 8. A 10 advance would carry the Dow to 825. In short, the present time appears to be one of those interesting periods where the market is approaching a critical juncture. Price action over the next few weeks should provide important clues as to action over the intermediate term ANTHONY W. TAB ELL Dow-Jones Ind. 806.03 Dow-Jones Rails 191. 98 WALSTON & CO. INC. TIll mnrket lettcl b not nnd unllel no Clrcumstnncc; IS t .. he nn fTcl \ …ell I II In un Ill''' 'CfCII cd 1 hel CIIl '. he 'nCm rnntlOl\ (JIluI1l1cd herein IS not J.1U11flntc(.!lII'I to IICCUllll til comJllet('nc.. ,Ind the !\nn,.,hllltr Itlt'ICIlr \-. 11' ,lnll 1IIl,I!') nIl (1IulI11lnllc,' to Le (n-.\I11ed n-., n rCPle,,('nl!l. 11(1/1 hy WlllstDrI & Co, hH', AJJ c'Cprc'.'wrlt f 11)'mIOn !He fu I'lJ,lIll!e nJllwllt J)Illul' W.1blJl & ell, JIl( .lm! OtTllel, Dlll'dlll', ,111/ thcrrof, Pll\lJHl-.e, …ell nn, O1ny h,\\e nn III the … mentlne11 heleUI 'Ihh 01,111,('1 Jettel ,-. mtellllcli nIH! ,ecIlI …' nH'I('ly ,I !-(enel,ll. lnflmnl ct)mmentRI), on (IlY to 1111)' market newl; nl\l\ nut n … a complete t\.\.hh.,llul,llfulm,ltwll With ll…. pcd to ,IllY 'llIltl(''' lefcllec\ to hl,,, hI' fill m-.heu Ii,POII request \\ lilt I