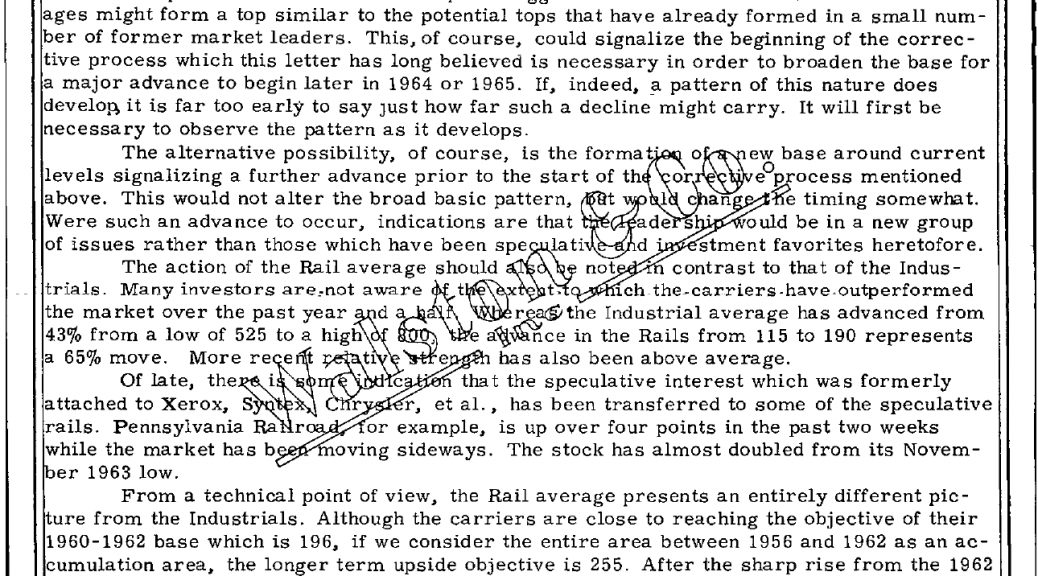 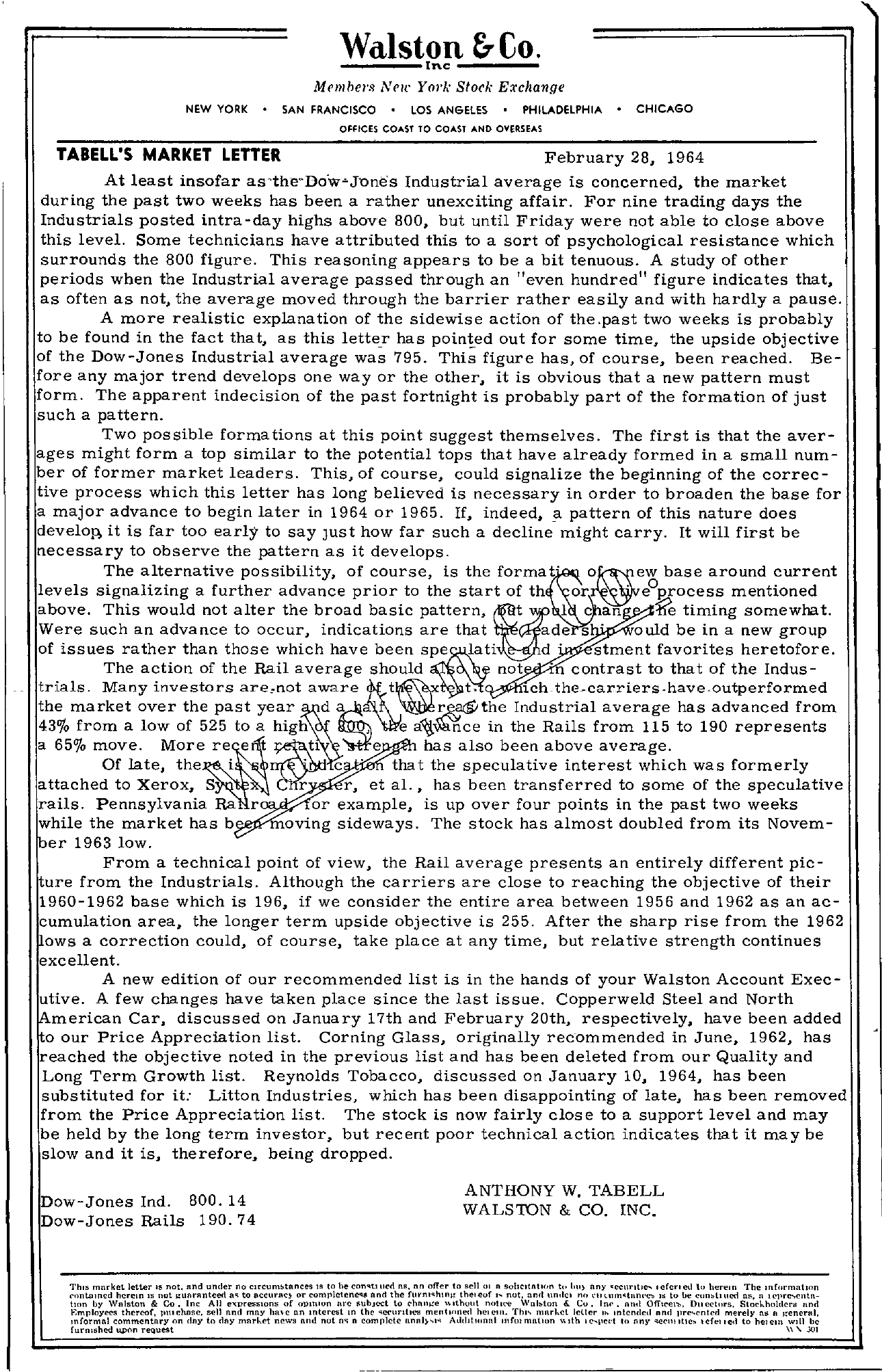 Walston &- Co. – inc – – – – – Memher.q Ne/' York Siock Exchange NEW YORK SAN FRANCISCO LOS ANGELES PHILADELPHIA CHICAGO OFFICES COAST TO COAST AND OVERSEAS TABELL'S MARKET LEnER February 28, 1964 At least insofar Industrial average is concerned, the market during the past two weeks has been a rather unexciting affair. For nine trading days the Industrials posted intra-day highs above 800, but until Friday were not able to close above this level. Some technicians have attributed this to a sort of psychological resistance which surrounds the 800 figure. This reasoning appears to be a bit tenuous. A study of other periods when the Industrial average passed through an even hundred figure indicates that, as often as not, the average moved through the barrier rather easily and with hardly a pause. A more realistic explanation of the sidewise action of the .past two weeks is probably to be found in the fact that, as this letter has pointed out for some time, the upside objective of the Dow-Jones Industrial average was 795. This figure has, of course, been reached. Before any major trend develops one way or the other, it is obvious that a new pattern must form. The apparent indecision of the past fortnight is probably part of the formation of just such a pattern. Two possible formations at this point suggest themselves. The first is that the aver- ages might form a top similar to the potential tops that have already formed in a small num- ber of former market leaders. This, of course, could signalize the beginning of the correc- tive process which this letter has long believed is necessary in order to broaden the base for a major advance to begin later in 1964 or 1965. If, indeed, a pattern of this nature does develop, it is far too early to say Just how far such a decline might carry. It will first be necessary to observe the pattern as it develops. The alternative possibility, of course, is the 0mew base around current alevels signalizing a further advance prior to the start of th mentioned above. This would not alter the broad basic pattern, I c an ie timing somewhat. Were such an advance to occur, indications are that ade s' ould be in a new group of issues rather than those which have been d' stment favorites heretofore. The action of the Rail average should not n contrast to that of the Indus- trials. Many investors are,not aware the market over the past year 430/0 from a low of 525 to a high ,e t21a 650/0 move. e e L lChthe-carriershave.outperformed Industrial average has advanced from in the Rails from 115 to 190 represents has also been above average. Of late, the i . c . that the speculative interest which was formerly attached to Xerox, S r r, et al., has been transferred to some of the speculative rails. Pennsylvania Ra r or example, is up over four points in the past two weeks while the market has b moving sideways. The stock has almost doubled from its Novem- er 1963 low. From a technical point of view, the Rail average presents an entirely different pic- ture from the Industrials. Although the carriers are close to reaching the objective of their 1960-1962 base which is 196, if we consider the entire area between 1956 and 1962 as an ac- cumulation area, the longer term upside objective is 255. After the sharp rise from the 1962 ows a correction could, of course, take place at any time, but relative strength continues excellent. A new edition of our recommended list is in the hands of your Walston Account Exec- utive. A few changes have taken place since the last issue. Copperweld Steel and North merican Car, discussed on January 17th and February 20th, respectively, have been added o our Price Appreciation list. Corning Glass, originally rec'ommended in June, 1962, has reached the objective noted in the previous list and has been deleted from our Quality and Long Term Growth list. Reynolds Tobacco, discussed on January 10, 1964, has been substituted for it Litton Industries, which has been disappointing of late, has been removed from the Price Appreciation list. The stock is now fairly close to a support level and may be held by the long term investor, but recent poor technical action indicates that it may be slow and it is, therefore, being dropped. Dow-Jones Ind. 800. 14 Dow-Jones Rails 190.74 ANTHONY W. TABELL WALSTON & CO. INC. ThiS mnrket letter 15 not. and under no Clrcum!tances IS to be ('ontl lied us, nn offer to sell Ul n soilcltatlOn to Inl) nny ,cfen ed \0 herem The mfnrmnhon (',)nwmed herein 15 nut 1!t1f1rll.nteed flO; to lIcc\!rnc or comllictcnC'l3 nnd the furnlhlll.!' theeof ,-. nut. ami un,ICI nil ('lItUintnn('c to be eun!hucd as, n leprc,cntn- hon by \Valston & Co. Inc All epresslOns of OpinIOn nre liubJcet to C'hnnj.!'e \\Ithuut Ilohc-e Wabton lJ.. Co. In…. nn,l Dllectrs, Stockholders lind EmlJloyees thereof, Il\llchnsc, sell and may hll\c nn Interest In the '1et'UrltJcs mentlnned helCIII. mllrket leltl'!r I mtcndell and IJre–ented merely ns n )!enerul, mformal commentary on dny to day marb.et news and not n; n complete A,lllltmnnl Inru.mahon \\lth ICI'ci't to nny Icfelle,1 to hClcm will he furnished upon request \\' 301