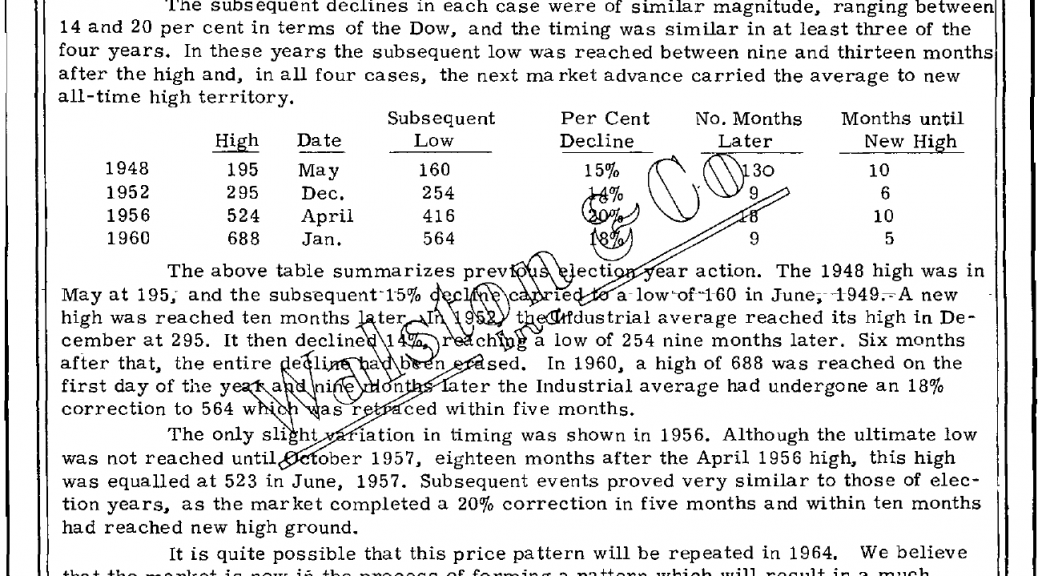 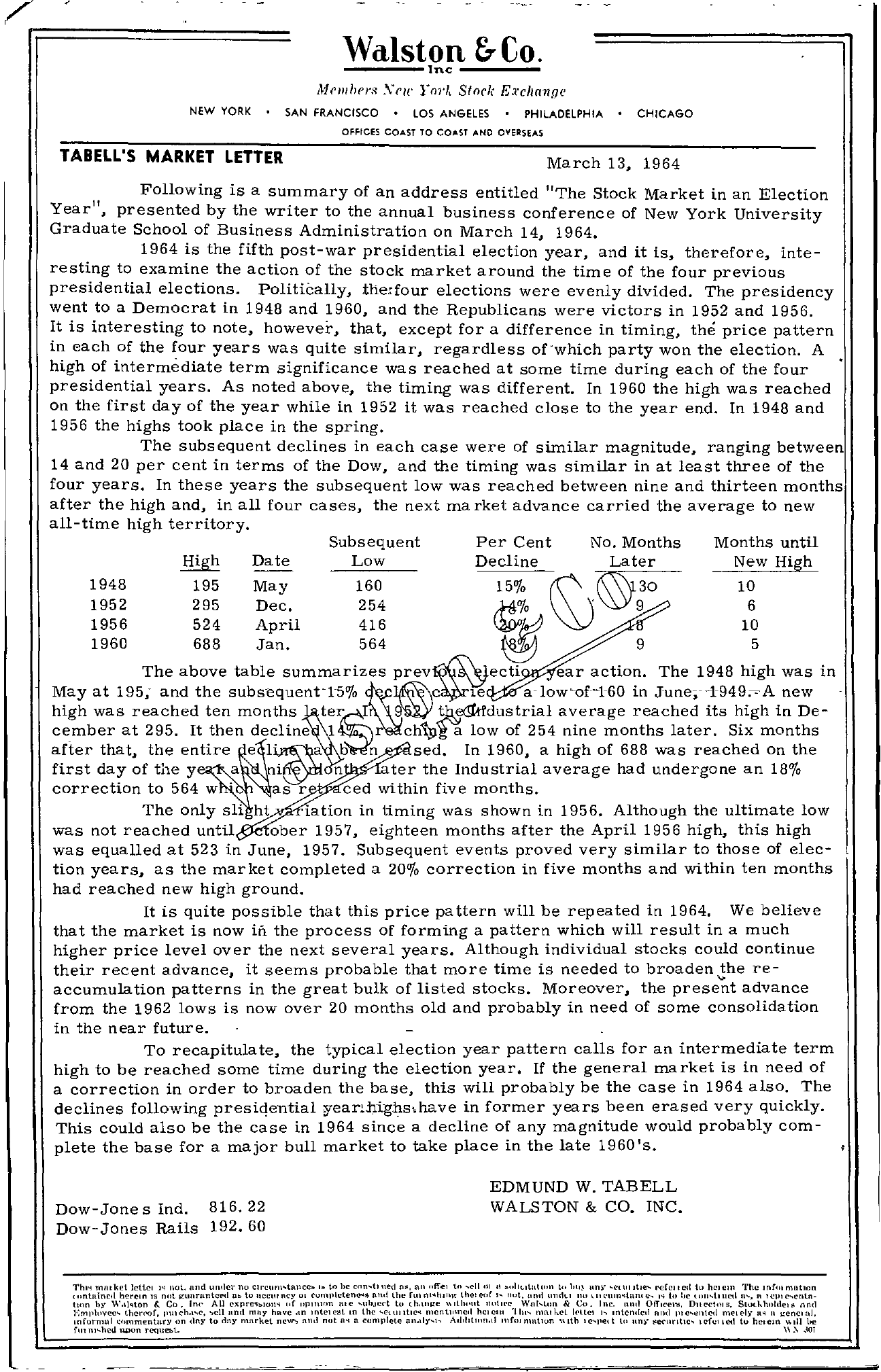 Walston &Co. Inc rn',Mfmhfl. Sf// Sinek E.1chnl1gc NEW YORK SAN FRANCISCO LOS ANGELES PHILADELPHIA CHICAGO OFFICES COAST TO COAST AND OVERSEAS TABEll'S MARKET lETTER March 13, 1964 Following is a summary of an address entitled The Stock Market in an Election Year, presented by the writer to the annual business conference of New York University Graduate School of Business Administration on March 14, 1964. 1964 is the fifth post-war presidential election year, and it is, therefore, interesting to examine the action of the stock market around the time of the four previous presidential elections. Politically, thetfour elections were evenly divided. The presidency went to a Democrat in 1948 and 1960, and the Republicans were victors in 1952 and 1956. It is interesting to note, however, that, except for a difference in timing, the price pattern in each of the four years was quite similar, regardless of'which party won the election. A high of intermediate term significance was reached at some time during each of the four presidential years. As noted above, the timing was different. In 1960 the high was reached on the first day of the year while in 1952 it was reached close to the year end. In 1948 and 1956 the highs took place in the spring. The subsequent declines in each case were of similar magnitude, ranging between 14 and 20 per cent in terms of the Dow, and the timing was similar in at least three of the four years. In these years the subsequent low was reached between nine and thirteen months after the high and, in all four cases, the next ma rket advance carried the average to new all-time high territory. Subsequent Per Cent No. Months Months until High Date Low Decline Later New High 1948 1952 1956 1960 195 May 295 Dec. 524 April 688 Jan. 160 254 416 564 150/0 '\'019 9 10 6 10 5 The above table summarizes ear action. The 1948 high was in May at 195,' and the high was reached ten months cember at 295. It then decline after that, the entire e first day of the y a correction to 564 w' as r QW a'low c of-1'60 in new average reached its high in De- 1 r chw)(a low of 254 nine months later. Six months jj n sed. In 1960, a high of 688 was reached on the n ter the Industrial average had undergone an 180/0 ced within five months. The only sli iation in timing was shown in 1956. Although the ultimate low was not reached until ober 1957, eighteen months after the April 1956 high, this high was equalled at 523 in June, 1957. Subsequent events proved very similar to those of elec- tion years, as the market completed a 200/0 correction in five months and within ten months had reached new high ground. It is quite possible that this price pattern will be repeated in 1964. We believe that the market is now iii the process of forming a pattern which will result in a much higher price level over the next several years. Although individual stocks could continue their recent advance, it seems probable that more time is needed to broadenJhe re- accumulation patterns in the great bulk of listed stocks. Moreover, the present advance from the 1962 lows is now over 20 months old and probably in need of some consolidation in the near future. To recapitulate, the typical election year pattern calls for an intermediate term high to be reached some time during the election year. If the general market is in need of a correction in order to broaden the base, this will probably be the case in 1964 also. The declines following presiqential tyearnighs,have in former years been erased very quickly. This could also be the case in 1964 since a decline of any magnitude would probably com- plete the base for a major bull market to take place in the late 1960's. Dow-Jone sInd. 816.22 Dow-Jones Rails 192.60 EDMUND W. TABELL WALSTON & CO. INC. mnl ket Jettel l'i lIot, lind umle\' no I to he n. nn lrel tn III n IILltHtUIil t.. IIny IIlllle… I'cfell cd til hi!1 ('Ill The lnfm mlltlln , ..ntuine,l herein IS nt j!lIllrllnte('d Ilb to IIcClllncy uL ('Unll)lctenC' Ilnd the CUI nl'ihlll\! thel ('ur I nut, nn.\ un,lt! IU, \ II l'II1U'ilnn. e … I ttl he um..,lIuCO,I 1\ … , ICIII (.entn- tum hy \\',I!'1ton &. Co. In' All IOf piliI'm Ille to th,lIII!C 'IIllwllt ll11tll'C Wnllun &. Cu, Inc, nlltl Dueetnls. Slod.. hnltlc,,, find 1'rnp!llvee.. ther'Of, IllU('h ..c, ,cUnnll mny hnvc ,Tn mtCIC!lt m thc O1Cl1tllll1C,1 hClcu, 'Jill Illllli..cl l'ltcl h mtCIl,etllllld pICelllC'i1 mCLcly n !.enel!ll, Informul commentary on tiny to tiny mnrkct n('W', nlLd not 11'1 n ('0111111clc an.IlYh AtI,htllln.tI Infu millIOn 'I Lth I (.I'C' t t !c('1Ir11Ic lefel Led to helem \\111 be f1ll n1heu uPOn .\ .lUI