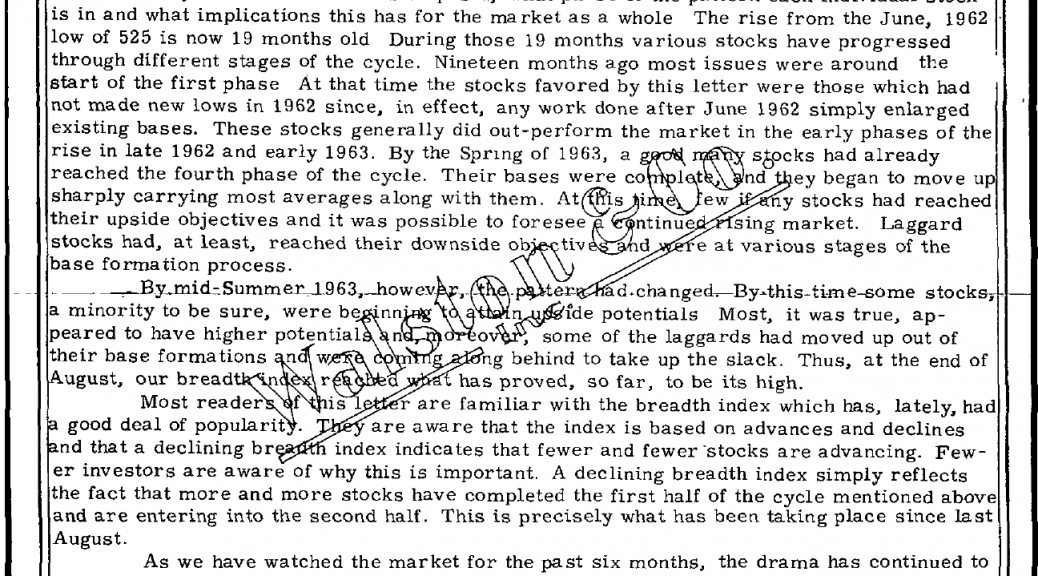 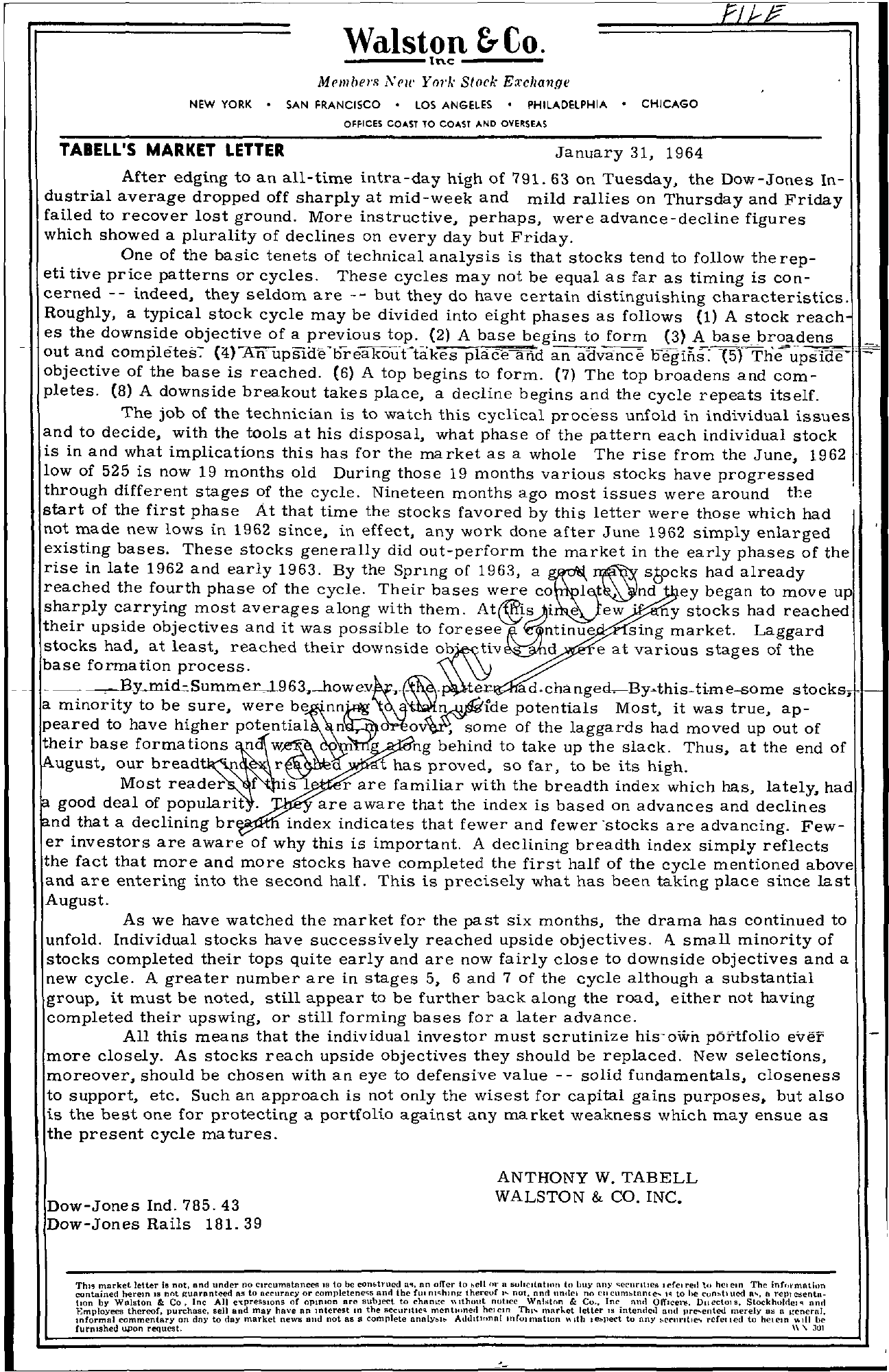 Walston &- Co. Inc Member.. ,Yell' Y01'k Siock Exchanaf NEW YORK SAN FRANCISCO LOS ANGELES PHILADELPHIA CHICAGO OFFICES COAST TO CO,ST NO OVERSEAS TABELL'S MARKET LETTER January 31, 1964 After edging to an all-time intra-day high of 791. 63 on Tuesday, the Dow-Jones In- dustrial average dropped off sharply at mid-week and mild rallies on Thursday and Friday failed to recover lost ground. More instructive, perhaps, were advance-decline figures which showed a plurality of declines on every day but Friday. One of the basic tenets of technical analysis is that stocks tend to follow the rep- eti tive price patterns or cycles. These cycles may not be equal as far as timing is con- cerned — indeed, they seldom are — but they do have certain distinguishing characteristics. Roughly, a typical stock cycle may be divided into eight phases as follows (ll A stock reach es the downside objective of a previous top. (2) A base begins to form (3) A base broadens out and ('1)1\n upSiae'oreakolJnakes pla.ce and atlaBvance objective of the base is reached. (6) A top begins to form. (7) The top broadens and com- pletes. (8) A downside breakout takes place, a decline begins and the cycle repeats itself. The job of the technician is to watch this cyclical process unfold in individual issues and to decide, with the tools at his disposal, what phase of the pattern each individual stock is in and what implications this has for the market as a whole The rise from the June, 1962 . low of 525 is now 19 months old During those 19 months various stocks have progressed through different stages of the cycle. Nineteen months ago most issues were around the start of the first phase At that time the stocks favored by this letter were those which had not made new lows in 1962 since, in effect, any work done after June 1962 simply enlarged existing bases. These stocks generally did out-perform the market in the early phases of the rise in late 1962 and early 1963. By the Spnng of 1963, a stpcks had already reached the fourth phase of the cycle. Their bases were co 1 ey began to move up sharply carrying most averages along with them. AtsJi ew' ny stocks had reached their upside objectives and it was possible to foresee f( sing market. Laggard stocks had, at least, reached their downside base forma tion process. e at various stages of the – – tel'. stocks,. a minority to be sure, were potentials Most, it was true, ap- peared to have higher potential n of the laggards had moved up out of their base forma tions and1 ng behind to take up the slack. Thus, at the end of ,August, our r has proved, so far, to be its high. Most r are familiar with the breadth index which has, lately, had good deal of popularitlt. are aware that the index is based on advances and declines land that a declining br'(/' index indicates that fewer and fewer 'stocks are advancing. Few- er investors are aware of why this is important. A declining breadth index simply reflects the fact that more and more stocks have completed the first half of the cycle mentioned above and are entering into the second half. This is precisely what has been takirrg place since last August. As we have watched the market for the past six months, the drama has contirrued to unfold. Irrdividual stocks have successively reached upside objectives. A. small minority of stocks completed their tops quite early arrd are rrow fairly close to dowrrside objectives and a new cycle. A greater number are in stages 5, 6 and 7 of the cycle although a substantial group, it must be noted, still appear to be further back along the road, either not having completed their upswing, or still forming bases for a later advance. All this means that the individual investor must scrutinize his' own portfolio ever more closely. As stocks reach upside objectives they should be replaced. New selections, moreover, should be chosen with arr eye to defensive value – – solid fundamentals, closeness to support, etc. Such an approach is not only the wisest for capital gains purposes, but also is the best one for protectirrg a portfolio agairrst arry market weakness which may ensue as the present cycle rna tures. Dow-Jones Ind. 785.43 Dow-Jones Rails 181. 39 ANTHONY W. TABELL WALSTON & CO. INC. Th mnrket letter is not, and under 110 clrcumstanC(fl 19 to be com.trued on olTer to hell or a suhcllntlnn til buy I\n)' ;eClintles I efel rell1.u hel em The infrmatlnn contained herem IS not Iruaranteed as to accuracy or completene;s anr! the fill n1hmJt thereof not, lind IInihl no CII to he \led a. 1\ rem Clentn- han by Wnlston & Co Inc All e'lpreSSlons of opinIOn are subject to chnnl.!;e \\Ithuut nutlce Wnllton &. Co.. Inc nn.\ Offlcel';, Dllcctms, Stoekhnldel'\ nnll Employees thereof, sell and may have an Interest m the securltle'\ mentu.ned heleln Thl mnrl..et letter IS intende. nnd Ilre..ented merely nl n I.!;enerlll, mformal commentary on dny to day market newl alld not fiB a complete nnnlYlll Athhtlflnal mfol mahan \\ Ith I('.)lect to any refelled to helt'ln III be furnished \.Won request, \\, JOI '-