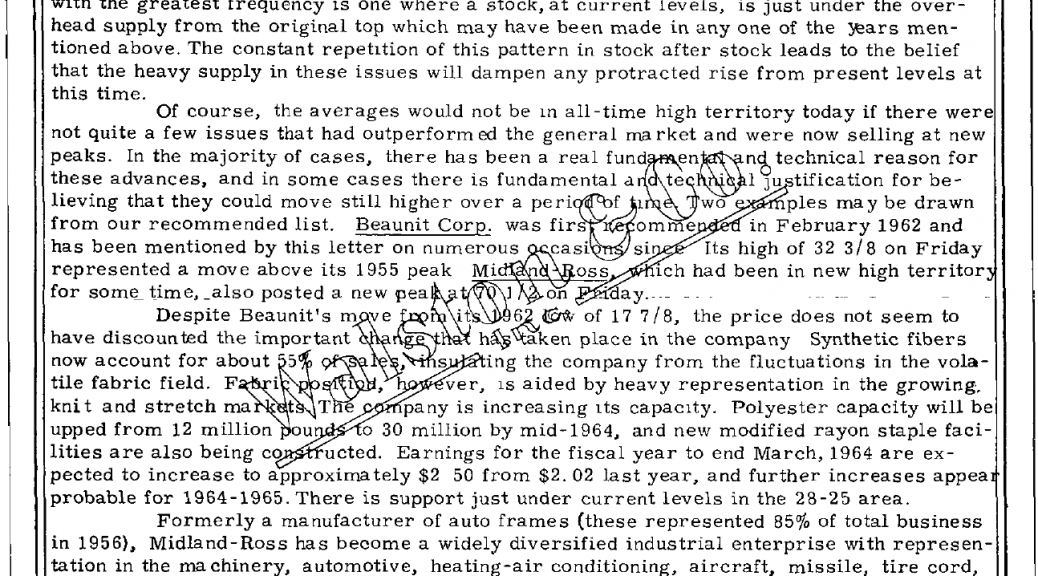 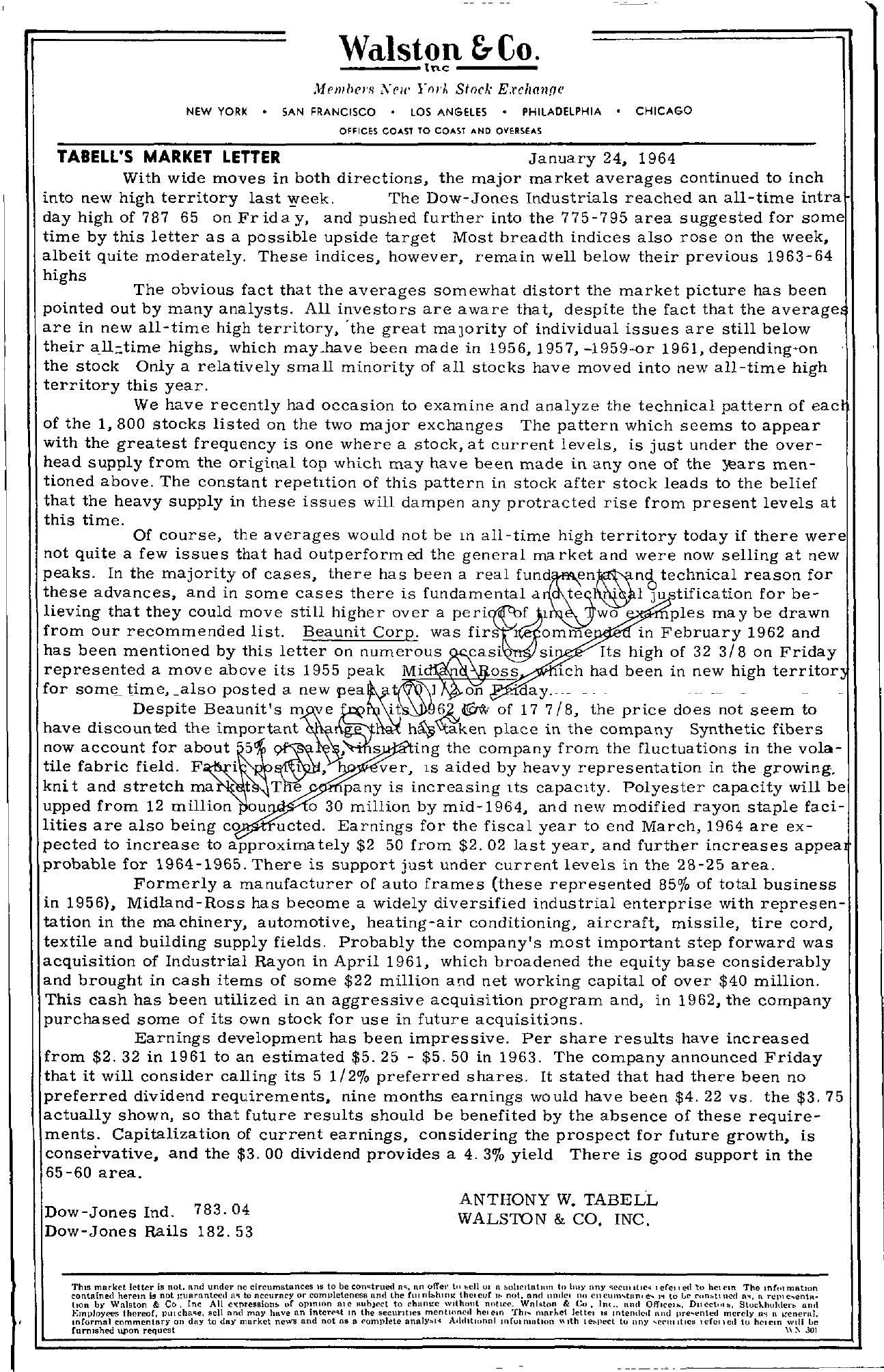 Wdlston &- CO. —';';;';'-tnc –…;.– ;l1elllleI'R Xell' rod, Stock E.rclwlIoe NEW YORK SAN FRANCISCO LOS ANGELES PHILADELPHIA OFFICES COAST TO COAST AND OVERSEAS CHICAGO TABELL'S MARKET LETTER January 24, 1964 With wide moves in both directions, the major market averages continued to inch into new high territory last The Dow-Jones Industrials reached an all-time intra day high of 787 65 on Friday, and pushed further into the 775-795 area suggested for some time by this letter as a possible upside target Most breadth indices also rose on the week, albeit quite mOderately. These indices, however, remain well below their previous 1963-64 highs The obvious fact that the averages somewhat distort the market picture has been pointed out by many analysts. All investors are aware that, despite the fact that the average are in newall-time high territory, 'the great majority of individual issues are still below their aUtime highs, which mayhave been made in 1956,1957, -1959-or 1961, depending-on the stock Only a relatively small minority of all stocks have moved into newall-time high territory this year. We have recently had occasion to examine and analyze the technical pattern of eac of the 1,800 stocks listed on the two major exchanges The pattern which seems to appear with the greatest frequency is one where a stock, at current levels, is just under the over- head supply from the original top which may have been made in anyone of the men- tioned above, The constant repetition of this pattern in stock after stock leads to the belief that the heavy supply in these issues will dampen any protracted rise from present levels at this time, Of course, the averages would not be 10 all-time high territory tOday if there were not quite a few issues that had outperformed the general market and were now selling at new peaks, In the majority of cases, there has been a real technical reason for these advances, and in some cases there is fundamental d te tification for be- lieving that they could move still higher over a wo pIes may be drawn from our recommended list, Beaunit Corp, was firs omme in February 1962 and has been mentioned by this letter on numerous casi si Its high of 32 3/8 on Friday represented a move above its 1955 peak Mi oss lch had been in new high territor for time, also posted a new 1 on ,'Clay, .. . Despite Beaunit's it of 17 7/8, the price does not seem to have disco un ted the important place in the company Synthetic fibers now account for about 5 , 's ing the company from the fluctuations in the vola- tile fabric field, F i 1, ver, lS aided by heavy representation in the growing. kni t and stretch rna T e pany is increasing lts capaclty, Polyester capacity will be upped from 12 million 030 million by mid-1964, and new modified rayon staple faci- lities are also being co ucted, Earnings for the fiscal year to end March, 1964 are ex- pected to increase to approxima tely 2 50 from 2,02 last year, and further increases appea probable for 1964-1965, There is support just under current levels in the 28-25 area, Formerly a manufacturer of auto frames (these represented 850/0 of total business in 1956), Midland-Ross has become a widely diversified industrial enterprise with represen- tation in the machinery, automotive, heating-air conditioning, aircraft, missile, tire cord, textile and building supply fields, Probably the company's most important step forward was acquisition of Industrial Rayon in April 1961, which broadened the equity base considerably and brought in cash items of some 22 million a'ld net working capital of over 40 million, This cash has been utilized in an aggressive acquisition program and, in 1962, the company purchased some of its own stock for use in future acquisitilns, Earnings development has been impressive, Per share results have increased from 2.32 in 1961 to an estimated 5.25 – 5,50 in 1963. The company announced Friday that it will consider calling its 5 1/20/0 preferred shares, It stated that had there been no preferred dividend requirements, nine months earnings would have been 4.22 vs, the 3,75 actually shown, so that future results should be benefited by the absence of these require- ments. Capitalization of current earnings, considering the prospect for future growth, is conservative, and the 3,00 dividend provides a 4, 30/0 yield There is good support in the 65 -60 area. Dow-Jones Ind. 783.04 Dow-Jones Rails 182.53 ANTHONY W. TABELL WALSTON & CO. INC. ThiS market letter jg not, and under nQ circumstances IS to be conqtrued n. an (.IiTel' tn 01 n luitcltntU1I1 to huy any CClII 1efCl1 ed tu hel,1n The InrO mntlnn contained herem is not j'unra nteed to nccuracy or completeness and the flll n !',hlllj.( thc. euf not. and undc. n(l Cll cum.,tun, c-. to LJe ued a', n rei ecnta. tlOn by Walston & Co, Inc All of oPInIOn ale to chnnl.(c wlthuut nntlrc. Wnh.t()n & Co. Inl., IIl1d Off'('CI … , Duectlb, Stockholder… an,1 Employees thereof, pUlchn'lc, scll nnd mny have an intert''1t 111 the securitIes men tinned he.cm fhl mnrh.el let tel IS Intende. find merely 11'1 fI ,,cnernl, Informal commcntary 011 day to dRY markct news and not liS a l'om)lete Atidltwnnl IIlrU'llIlltlim \\Ith le.pecl tu Ilny lerellC,1 to hClcm will LJe furmshed u,pon request ,,-. 3D1