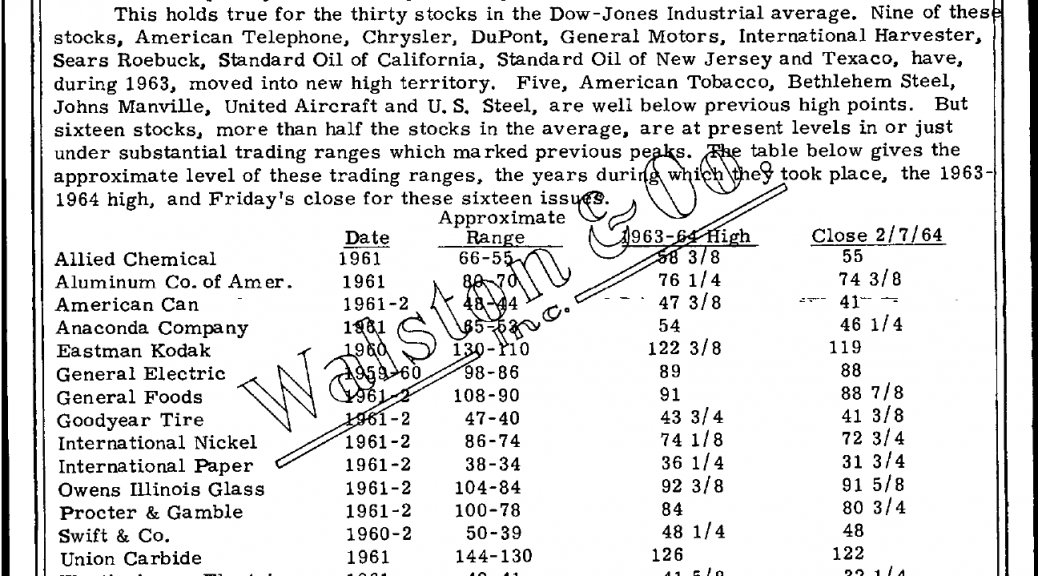 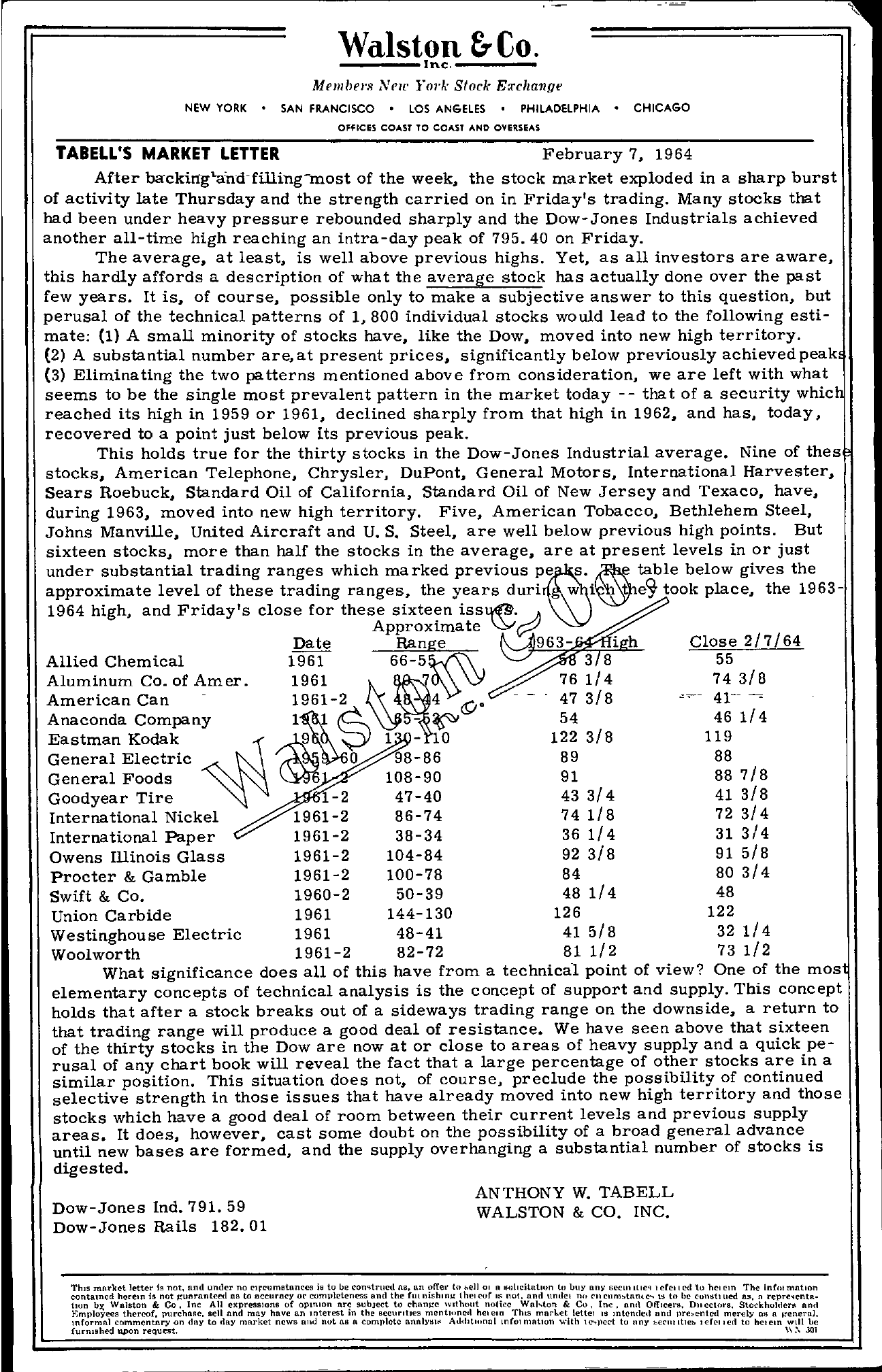 Walston &CO. Inc. Membel. Nell' York' Stock Exchange NEW YORK SAN FRANCISCO LOS ANGELES PHILADELPHIA CHICAGO OFFICES COAST TO COAST AND OVERSEAS TABEll'S MARKET lETTER February 7, 1964 After backing'ami-filling-most of the week, the stock market exploded in a sharp burst of activity late Thursday and the strength carried on in Friday's trading. Many stocks that had been under heavy pressure rebounded sharply and the Dow-Jones Industrials achieved another all-time high reaching an intra-day peak of 795.40 on Friday. The average, at least, is well above previous highs. Yet, as all investors are aware, this hardly affords a description of what the average stock has actually done over the past few years. It is, of course, possible only to make a subjective answer to this question, but perusal of the technical patterns of 1,800 individual stocks would lead to the following esti- mate (1) A small minority of stocks have, like the Dow, moved into new high territory. (2) A substantial number are,at present prices, significantly below previously achieved peak (3) Eliminating the two patterns mentioned above from consideration, we are left with what seems to be the single most prevalent pattern in the market today – – that of a security whic reached its high in 1959 or 1961, declined sharply from that high in 1962, and has, today, recovered to a point just below its previous peak. This holds true for the thirty stocks in the Dow-Jones Industrial average. Nine of thes stocks, American Telephone, Chrysler, DuPont, General Motors, International Harvester, Sears Roebuck, Standard Oil of California, Standard Oil of New Jersey and Texaco, have, during 1963, moved into new high territory. Five, American Tobacco, Bethlehem Steel, Johns Manville, United Aircraft and U. S. Steel, are well below previous high points. But sixteen stocks, more than half the stocks in the average, are at present levels in or just under substantial trading ranges which marked previous table below gives the approximate level of these trading ranges, the years duri w took place, the 1963- 1964 high, and Friday's close for these sixteen Approximate \yv-. Date Range 963- ih Close 2/7/64 Allied Chemical 1961 I 38 55 Aluminum Co. of Amer. American Can Anaconda Company Eastman Kodak General Electric 1961 ci1961-2 V 0 4 O. 1 – 10 98-86 761/4 47 3/8 54 122 3/8 89 743/8 461/4 119 88 General Foods 108-90 91 88 7/8 Goodyear Tire 1-2 47-40 433/4 41 3/8 International Nickel 1961-2 86-74 741/8 72 3/4 International Paper 1961-2 38-34 361/4 313/4 Owens Illinois Glass 1961-2 104-84 923/8 91 5/8 Procter & Gamble 1961-2 100-78 84 803/4 Swift & Co. 1960-2 50-39 48 1/4 48 Union Carbide 1961 144-130 126 122 Westinghouse Electric 1961 48-41 41 5/8 32 1/4 Woolworth 1961-2 82-72 81 1/2 73 1/2 What significance does all of this have from a technical point of view One of the mos elementary concepts of technical analysis is the concept of support and supply. This concept holds that after a stock breaks out of a sideways trading range on the downside, a return to that trading range will produce a good deal of resistance. We have seen above that sixteen of the thirty stocks in the Dow are now at or close to areas of heavy supply and a quick perusal of any chart book will reveal the fact that a large percentage of other stocks are in a similar position. This situation does not, of course, preclude the possibility of continued selective strength in those issues that have already moved into new high territory and those stocks which have a good deal of room between their current levels and previous supply areas. It does, however, cast some doubt on the possibility of a broad general advance until new bases are formed, and the supply overhanging a substantial number of stocks is digested. Dow-Jones Ind. 791. 59 Dow-Jones Rails 182.01 ANTHONY W. TABELL WALSTON & CO. INC. ThIS mnrkelletter is not, and under no circumstances is to be con-.trucd ns, an to hell 01 R .milcitntlOn to buy any I efcil cd \0 hel em The Intut mntlOn contamed herem is not j!unrantcl!\ as to accuracy or completeness and the CUI n1Shlllg thel cuf . not. nnd untlel no ('11 cumtnntC- IS to be ('umlt! ued as, n reprc'Icntao t!on bw; Walston & Co, All expressions of opinIOn nrIJ subject to chaRlotc wJthuut notice WaJ..ton & Co, Inc. anel Offlcell!. 0llectors. Stockholllers and ,mployees thereof, purchllse. sell and may have an Interest m the securities mentlme.1 hel em 'fhls mart..et lettel IS mtendetl nnd merely at; a I-'cncrnJ. mformnl commcntary on dny to day market ncws and not as n completc analysl A.ldltlUnnl lIlrtJ1 matlOn with t('')Icct to !lRY '('(,llIltleb Idellell to helem will be furDished upon request. \\-. 301