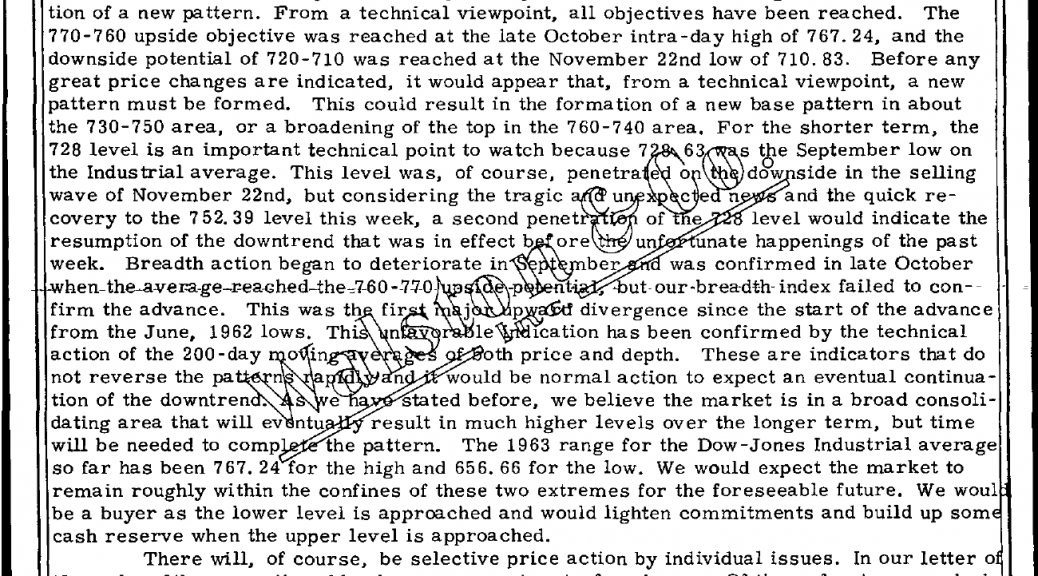 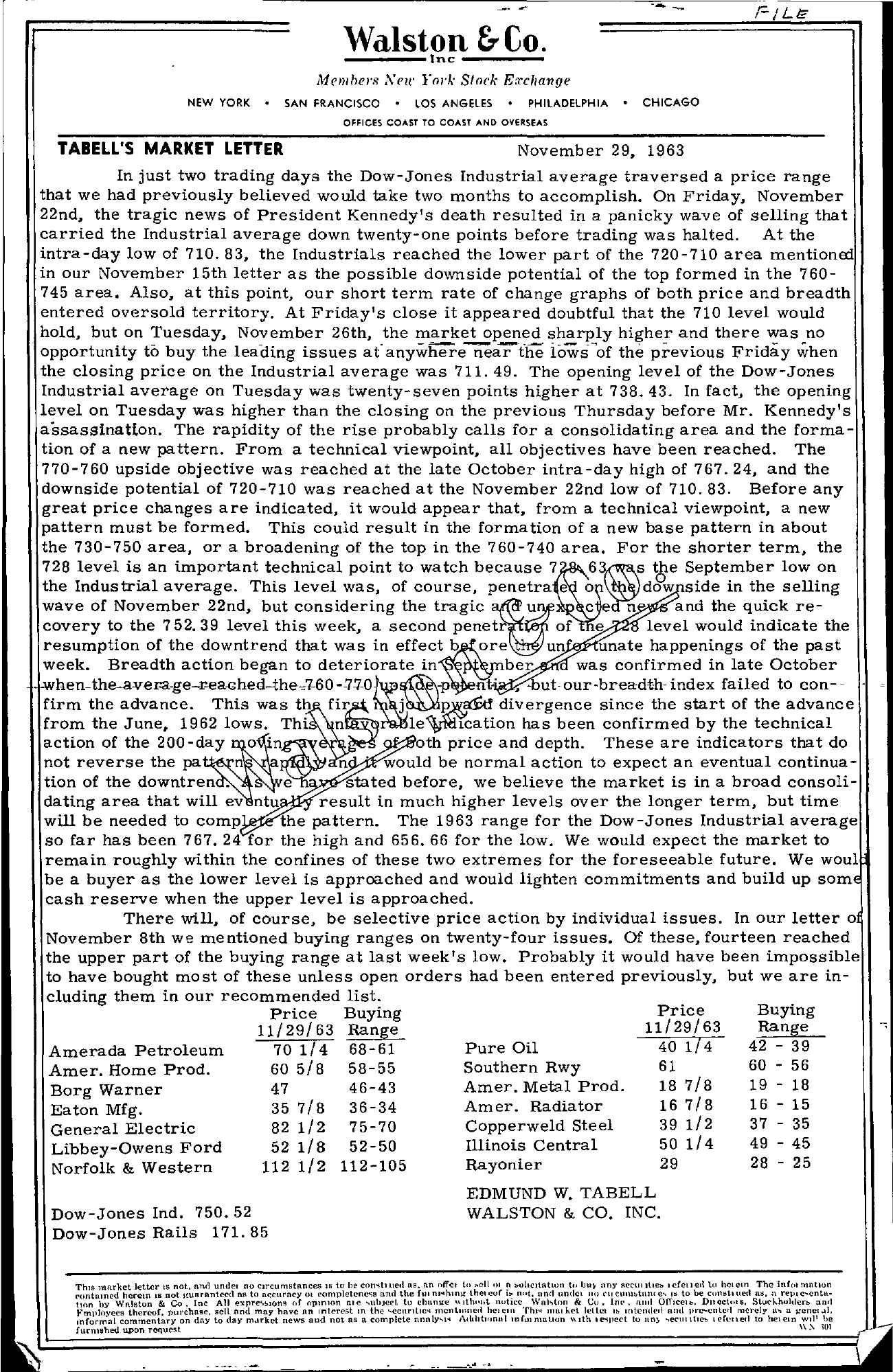 . – Walston &- Co. —–lnc —– Mcmler8 XCII' 'o,-k Sloe/; Exchange — – NEW YORK SAN FRANCISCO LOS ANGELES PHILADELPHIA CHICAGO OFFICES COAST TO COAST AND OVERSEAS TABELL'S MARKET LETTER November 29, 1963 In just two trading days the Dow-Jones Industrial average traversed a price range that we had previously believed would take two months to accomplish. On Friday, November 22nd, the tragic news of President Kennedy's death resulted in a panicky wave of selling that carried the Industrial average down twenty-one points before trading was halted. At the intra-day low of 710.83, the Industrials reached the lower part of the 720-710 area mentione! in our November 15th letter as the possible downside potential of the top formed in the 760- 745 area. Also, at this point, our short term rate of change graphs of both price and breadth entered oversold territory. At Friday's close it appeared doubtful that the 710 level would hold, but on Tuesday, November 26th, the market opened sharply higher and there was no opportunity to buy the leaaing issues at anywiierenearthe iciwiof the previous Friday when the closing price on the Industrial average was 711. 49. The opening level of the Dow-Jones Industrial average on Tuesday was twenty-seven points higher at 738.43. In fact, the opening level on Tuesday was higher than the closing on the previous Thursday before Mr. Kennedy's assassination. The rapidity of the rise probably calls for a consolidating area and the forma- tion of a new pattern. From a technical viewpoint, all objectives have been reached. The 770-760 upside objective was reached at the late October intra-day high of 767.24, and the downside potential of 720-710 was reached at the November 22nd low of 710.83. Before any great price changes are indicated, it would appear that, from a technical viewpoint, a new pattern must be formed. This could result in the formation of a new base pattern in about the 730-750 area, or a broadening of the top in the 760-740 area. For the shorter term, the 728 level is an important technical point to watch the Industrial average. This level was, of course, penetra e 0 the September low on dgw side in the selling awave of November 22nd, but considering the tragic c e n and the quick re- covery to the 752.39 level this week, a second penet of e level would indicate the resumption of the downtrend that was in un unate happenings of the past week. Breadth action began to deteriorate in ber was confirmed in late October nt ut ourbreadth- index failed to con– firm the advance. This was divergence since the start of the advance from the June, 1962 lows. Thi n has been confirmed by the technical action of the not reverse the pa 0 n oth price and depth. These are indicators that do n . would be normal action to expect an eventual continua- tion of the downtren . e stated before, we believe the market is in a broad consoli- dating area that will ev ntu result in much higher levels over the longer term, but time will be needed to comp the pattern. The 1963 range for the Dow-Jones Industrial average so far has been 767.24 for the high and 656.66 for the low. We would expect the market to remain roughly within the confines of these two extremes for the foreseeable future. We woul be a buyer as the lower level is approached and would lighten commitments and build up som cash reserve when the upper level is approached. There will, of course, be selective price action by individual issues. In our letter 0 November 8th we mentioned buying ranges on twenty-four issues. Of these, fourteen reached the upper part of the buying range at last week's low. Probably it would have been impossible to have bought most of these unless open orders had been entered previously, but we are in- cluding them in our recommended list. Price Buying 11/29/63 Range Amerada Petroleum 70 1/4 68-61 Amer. Home Prod. 605/8 58-55 Borg Warner 47 46-43 Eaton Mfg. 35 7/8 36-34 General Electric 82 1/2 75-70 Libbey-Owens Ford 52 1/8 52-50 Norfolk & Western 112 1/2 112-105 Pure Oil Southern Rwy Amer. Metal Prod. Amer. Radiator Copperweld Steel Illinois Central Rayonier Price 11/29/63 40 1/4 61 18 7/8 16 7/8 39 1/2 50 1/4 29 Buying Range 42 – 39 60 – 56 19 – 18 16 – 15 37 – 35 49 – 45 28 – 25 Dow-Jones Ind. 750.52 Dow-Jones Rails 171. 85 EDMUND W. TABELL WALSTON & CO. INC. ThIS market letter tS not. and under no clrcumstnnces IS to he con'ltll1e.1 UB, fln nffel tn ,,(!Il 1)1 !' t Ilny IH!C\llllie I dell ell t(1 hel Cln The info) matmn ('untnlned herem IS not J!unrnntC'Cd as to accurncy ot ano the f\1I m ..hllll! thet cur nClt, and undcl 11() ('II IS to be ('I11tl ued as, 1I rell! c–cntu. lIon hy Walston & Co, Inc All exprc'!'lOns of opinIOn nIl' ,uhJect tu chun)!e \\llh..ut lIutice, & Cu, 1m', alII Offleel DnectUls, Stuch.hul(len, allfl o'mplo)'ecs thereof, pUI'chase, sell lind muy hllvc an Interest In the ecllrlllcq mClltlllllcl1 heiC11I Illlllkct leltel Intended lind prccntcrl mercly II., a J,!enel..ll, IIlformal commentary on day to day m..lrket news and not as a complete nllniYlq AlldltlJnuilllfUlmnl101l \\Ith 1(Illeel to 1I1l) .,eelllllle;, lerL'll('l to helelll WII' ,he furmshed upon request \\'\ ,01 \