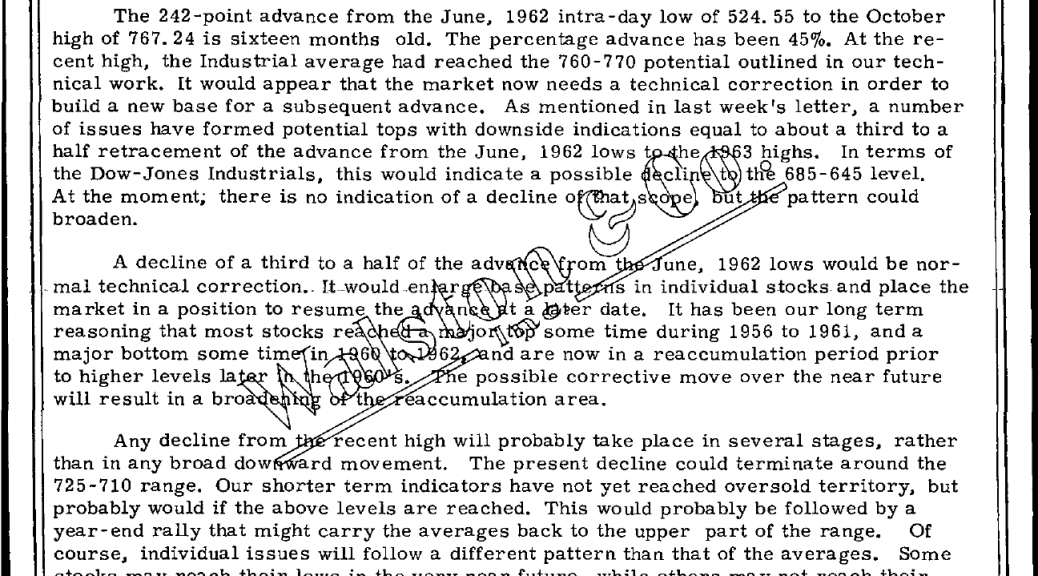 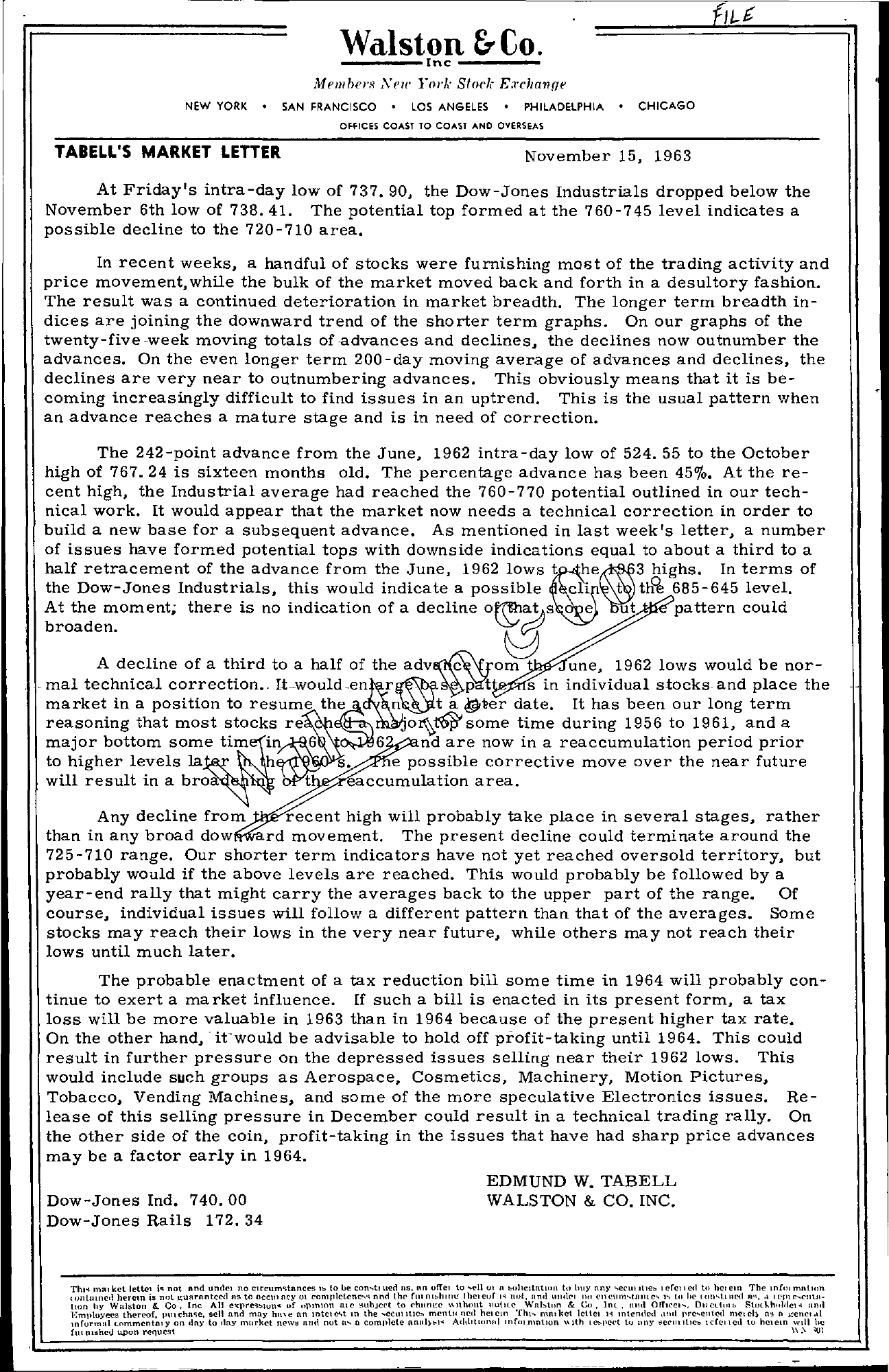 Walston &Co. – Inc —..;… MemleI'H Xell' rol'l, Stock E.1Cila!1ge NEW YORK SAN FRANCISCO LOS ANGELES PHILADELPHIA CHICAGO OffiCES COAST TO COAST AND OVERSEAS TABELL'S MARKET LETTER November 15, 1963 fllt At Friday's intra-day low of 737.90, the Dow-Jones Industrials dropped below the November 6th low of 738.41. The potential top formed at the 760-745 level indicates a possible decline to the 720-710 area. In recent weeks, a handful of stocks were furnishing most of the trading activity and price movement, while the bulk of the market moved back and forth in a desultory fashion. The result was a continued deterioration in market breadth. The longer term breadth in- dices are joining the downward trend of the shorter term graphs. On our graphs of the twenty-five moving totals of and declines, the declines now outnumber the advances. On the even longer term 200 -day moving average of advances and declines, the declines are very near to outnumbering advances. This obviously means that it is be- coming increasingly difficult to find issues in an uptrend. This is the usual pattern when an advance reaches a mature stage and is in need of correction. The 242-point advance from the June, 1962 intra-day low of 524. 55 to the October high of 767.24 is sixteen months old. The percentage advance has been 450/0. At the re- cent high, the Industrial average had reached the 760-770 potential outlined in our tech- nical work. It would appear that the market now needs a technical correction in order to build a new base for a subsequent advance. As mentioned in last week's letter, a number of issues have formed potential tops with downside indications equal to about a third to a half retracement of the advance from the June, 1962 lows highs. In terms of the Dow-Jones Industrials, this would indicate a possible cli t 685-645 level. At the moment; there is no indication of a decline a e ut pattern could broaden. A decline of a third to a half of the advs;Wrom-LL 'June, 1962 lows would be nor- mal technical correction. ILwould s in individual stocks and place the market in a position to resume thS a date. It has been our long term reasoning that most time during 1956 to 1961, and a major bottom in 6 6 nd are now in a reaccumulation period prior to higher levels la h s. e possible corrective move over the near future will result in a bro t eaccumulation area. Any decline from recent high will probably take place in several stages, rather than in any broad dow ard movement. The present decline could terminate around the 725-710 range. Our shorter term indicators have not yet reached oversold territory, but probably would if the above levels are reached. This would probably be followed by a year-end rally that might carry the averages back to the upper part of the range. Of course, individual issues will follow a different pattern than that of the averages. Some stocks may reach their lows in the very near future, while others may not reach their lows until much later. The probable enactment of a tax reduction bill some time in 1964 will probably con- tinue to exert a ma rket influence. If such a bill is enacted in its present form, a tax loss will be more valuable in 1963 than in 1964 because of the present higher tax rate. On the other be advisable to hold off profit-taking until 1964. This could result in further pressure on the depressed issues selling near their 1962 lows. This would include sllch groups as Aerospace, Cosmetics, Machinery, Motion Pictures, Tobacco, Vending Machines, and some of the more speculative Electronics issues. Re- lease of this selling pressure in December could result in a technical trading rally. On the other side of the coin, profit-taking in the issues that have had sharp price advances may be a factor early in 1964. Dow-Jones Ind. 740.00 Dow-Jones Rails 172. 34 EDMUND W. TABELL WALSTON & CO. INC. Thl-l mil' ket Icttel i'l not lind undcl no circumstances ,,, to be con.,tl ued liS, nn oITe! to ..ell OJ II hcltntLUIl ttl bllY nn)' CCUI 1efell etl tn hel em The In(o, mnlum I)ntlllnc,l hereIn is not l!unrnntccd llS to IlCCl11ncy 01 complctenc-. nno th(' fm nhln\! IhN('r . Iwl, nn.1 11111\('1 11 ell CIIIY\.,tnIHe., 1 to he (111.,t. lied II. ,\ Il'P1C.,ClIlll- tum hy WHIston l.. Co. Inc All eX)lreSlUn tlf 11JnlOn Ille uhJelt ttl rhullJ!e \\Jthnllt lw\JLe Waltun & C, JnL, !lml OfrlN!I …. ()ueLll Stud,holdel an.1 Emll\uyees thereof, II\l\chn'le, sell and may hlne nn IIltC1C'ot III the …eelllltie. mentu ned helem Thl mn,ket \eHel l'i lIltendet! .IIHI l'rc…cntcd melcl) n'! n g-cnl'I.1i lIlfurmui ('f'mmcntnlY on dn)' to ,lay markc-t allli nut II n comllicte nnUhf,l Adllllwllni IIlrlmntJOn \\Ith 1&1l'I't tl nny Cl'IIlJtJe ldcI1Coi tu heJeln wdl he fllt u,pun requcst \\.' ;U1