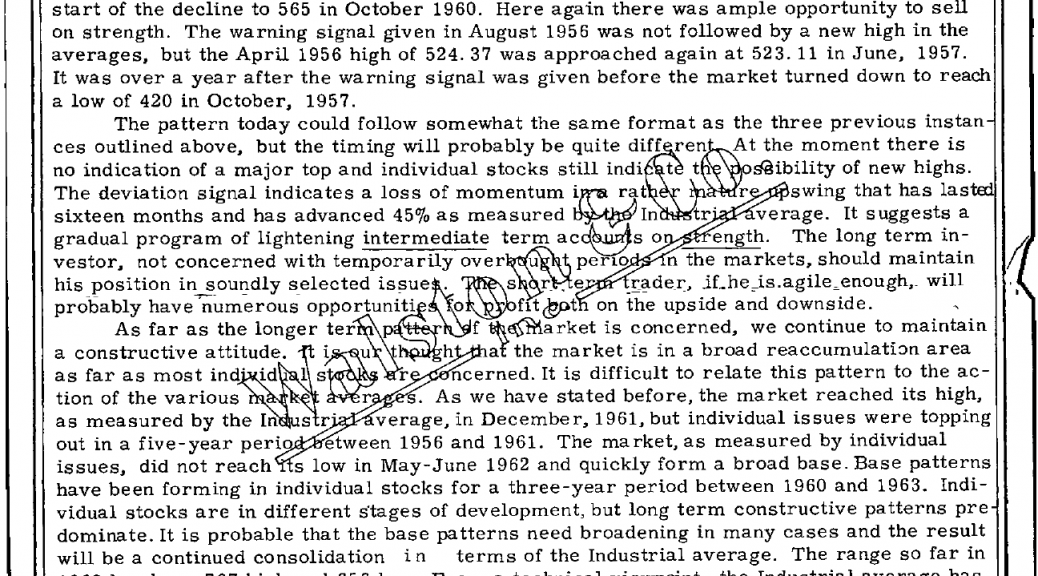 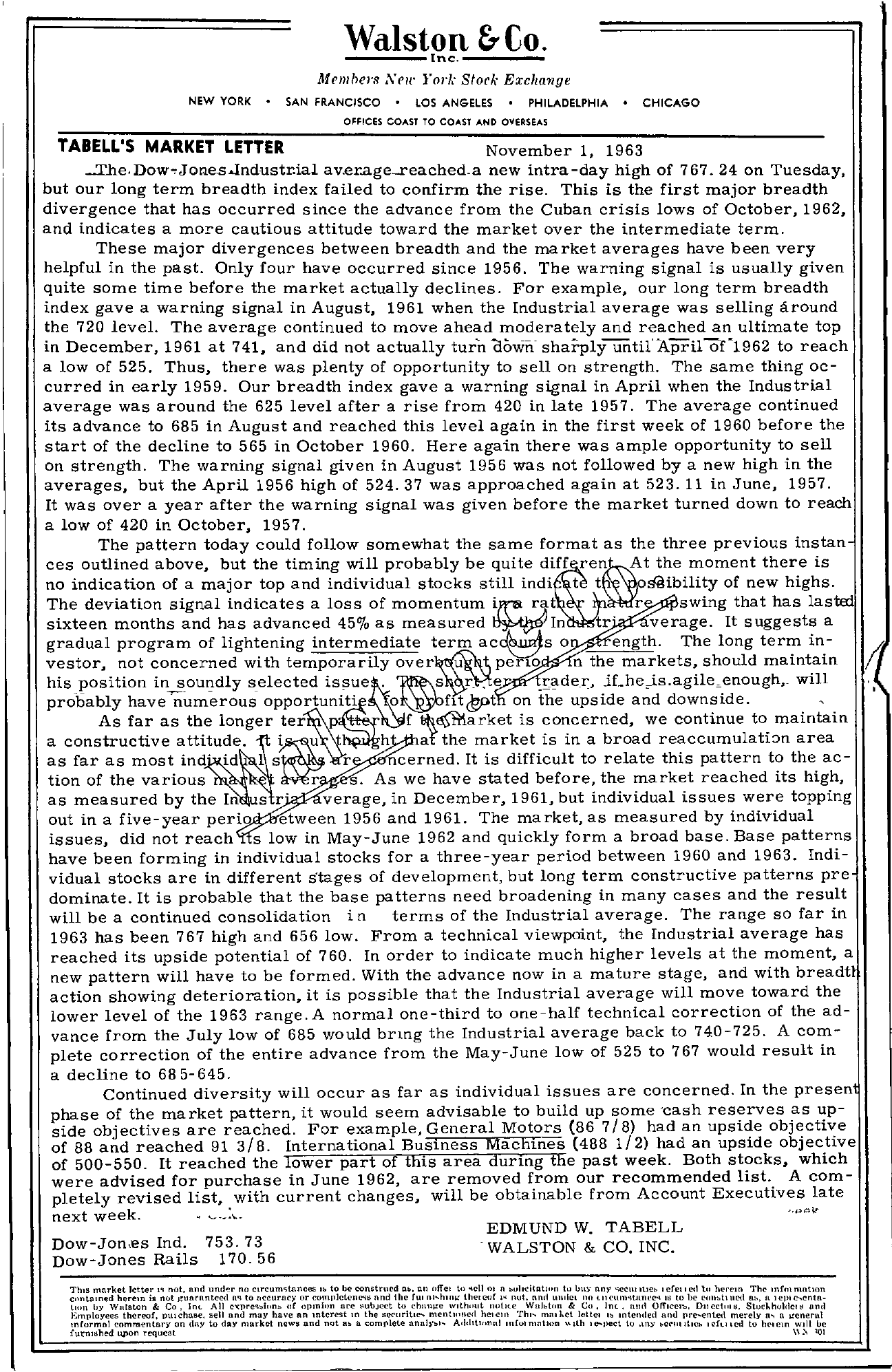 Walston &Co. Inc. Melllle, ,YeH' York Stock Exchange NEW YORK SAN FRANCISCO LOS ANGELES PHILADELPHIA CHICAGO OFFices COAST TO COAST AND OVERSEAS TABELL'S MARKET LETTER November 1, 1963 …The. Dow,Jor.J.e.sJndustr.ial av.er.age-reached.a new intra-day high of 767.24 on Tuesday, but our long term breadth index failed to confirm the rise. This is the first major breadth divergence that has occurred since the advance from the Cuban crisis lows of October, 1962, and indicates a more cautious attitude toward the market over the intermediate term. These major divergences between breadth and the market averages have been very helpful in the past. Only four have occurred since 1956. The warning signal is usually given quite some time before the market actually declines. For example, our long term breadth index gave a warning signal in August, 1961 when the Industrial average was selling around the 720 level. The average continued to move ahead moderately and reached an ultimate top in December, 1961 at 741, and did not actually turn Clown sharply until'Aprilor'1962 to reach a low of 525. Thus, there was plenty of opportunity to sell on strength. The same thing oc- curred in early 1959. Our breadth index gave a warning signal in April when the Industrial average was around the 625 level after a rise from 420 in late 1957. The average continued its advance to 685 in August and reached this level again in the first week of 1960 before the start of the decline to 565 in October 1960. Here again there was ample opportunity to sell on strength. The warning signal given in August 1956 was not followed by a new high in the averages, but the April 1956 high of 524.37 was approached again at 523.11 in June, 1957. It was over a year after the warning signal was given before the market turned down to reach a low of 420 in October, 1957. The pattern today could follow somewhat the same format as the three previous instan ces outlined above, but the timing will probably be quite the moment there is no indication of a major top and individual stocks still indi t t ssibility of new highs. The deviation signal indicates a loss of momentum r swing that has last d sixteen months and has advanced 45 as measured gradual program of lightening intermediate term tr' verage. It suggests a 0 ength. The long term in- /I vestor, not concerned with temporarily peno n the markets, should maintain his .position selected Sl,der, will probably have numerous on the upside and downside. , As far as the longer f is concerned, we continue to maintain a constructive attitude. h at the market is in a broad reaccumulatim area as far as most indO id I s r ncerned. It is difficult to relate this pattern to the ac- tion of the various r s. As we have stated before, the market reached its high, as measured by the In r verage, in December, 1961, but individual issues were topping out in a five-year perio etween 1956 and 1961. The market, as measured by individual issues, did not reach s low in May-June 1962 and quickly form a broad base. Base patterns have been forming in individual stocks for a three-year period between 1960 and 1963. Indi- vidual stocks are in different stages of development, but long term constructive patterns pre dominate. It is probable that the base patterns need broadening in many cases and the result will be a continued consolidation in terms of the Industrial average. The range so far in 1963 has been 767 high and 656 low. From a technical viewpoint, the Industrial average has reached its upside potential of 760. In order to indicate much higher levels at the moment, a new pattern will have to be formed. With the advance now in a mature stage, and with breadt action showing deterioration, it is possible that the Industrial average will move toward the lower level of the 1963 range. A normal one-third to one-half technical correction of the ad- vance from the July low of 685 would brmg the Industrial average back to 740-725. A com- plete correction of the entire advance from the May-June low of 525 to 767 would result in a decline to 685- 645. Continued diversity will occur as far as individual issues are concerned. In the presen phase of the market pattern, it would seem advisable to build up some 'cash reserves as up- side objectives are reached. For example, General Motors (86 7/8) had an upside objective of 88 and reached 91 3/8. International Busmess Machmes (488 1/2) had an upside objective of 500-550. It reached the lower part of this area dunng the past week. Both stocks, which were advised for purchase in June 1962, are removed from our recommended list. A com- pletely revised list, with current changes, will be obtainable from Account Executives late next week. ………. -,,)AY- Dow-Jon,es Ind. 753. 73 Dow-Jones Rails 170.56 EDMUND W. TABELL -WALSTON & CO. INC. ThiS market Jctter not. Dnd no CI1'cum;lnnces I! to be construed nb, an nffct tn '1ell 01 tl ….heilatln tu nny o;eelllitle., I CfCl1 ell 'ttl herem The mCnl mnhon CDntnmed herem is not ).tunrnntced n'l to llCCUfllCY or find the flu ni-.hllll! (heleuf nut. fino tIllltet no tlICIlIn'ltnnt'e to bc ctmtllwd a, II leplc,,cnta- lion by Wlliston & Co, InL All C'l(pre;j(ln of upmiun nrc lubJcct to chau!!c w,th,,t 110tltC Wah.ton & CIl, lnl. IIlld Officer, unt! Employees th(!reof, IlUlehase, sell and mny hav(! In mterest III the mcnt101ned hel elll Th,.., mal het Jettel I Intended and Ilre..,enletl merely a., a t.!cnerlli mformal commentnry on tlay to day market news and nut a a complete unaly… Ad.l1twnnlll1f01nwtllm Ith le-lleet to .IllY e(ll1cb lefLllceI to helem Will be furmllhed uPon request \\.\