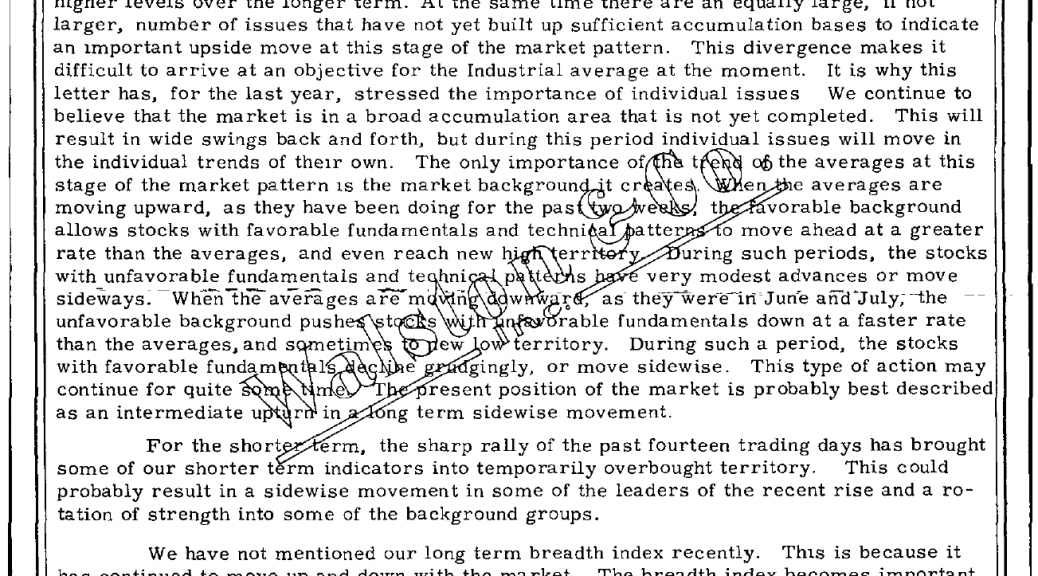 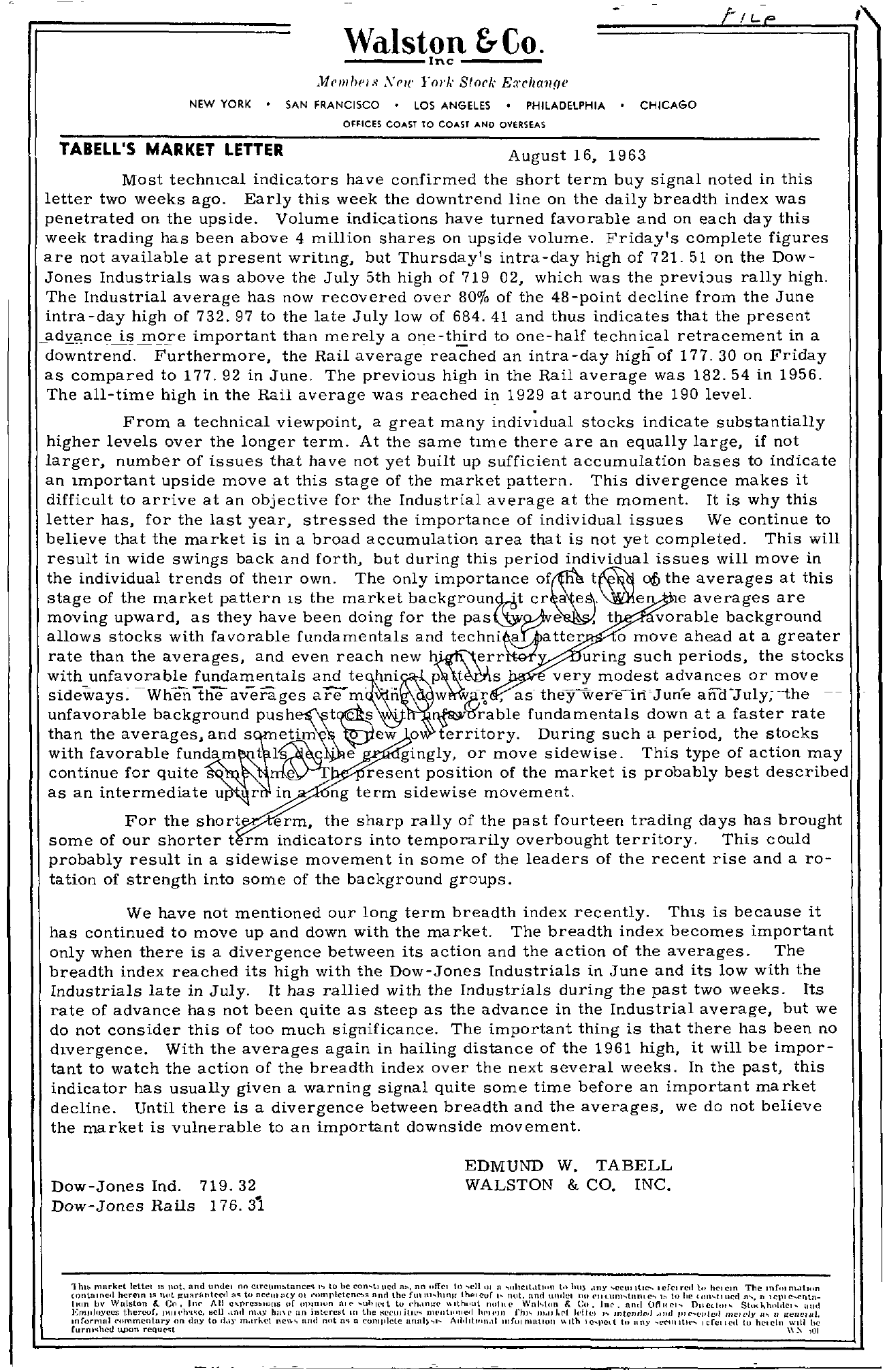 NEW YORK Walston &Co. —–Inc —– Jlcm/lI'I,' XCI/' ln'.. Sinck EchUlIlIl' SAN FRANCISCO LOS ANGELES PHILADELPHIA CHICAGO OFFICES COAST TO COAST AND OVERSEAS I TABELL'S MARKET LETTER August 16, 1963 Most techmcal indicators ha ve confirmed the short term buy signal noted in this letter two weeks ago. Early this week the downtrend line on the daily breadth index was penetrated on the upside. Volume indications have turned favorable and on each day this week trading has been above 4 million shares on upside volume. Friday's complete figures are not available at present writmg, but Thursday's intra-day high of 721. 51 on the Dow- Jones Industrials was above the July 5th high of 719 02, which was the previJus rally high, The Industrial average has now recovered over 800/0 of the 48-point decline from the June intra-day high of 732.97 to the late July low of 684.41 and thus indicates that the present adya,nce is more important than merely a one-third to one-half technical retracement in a downtrend,-P-;rthermore, the Rail average' an intra -day high- of 177. 30 on Friday as compared to 177.92 in June, The previous high in the Rail average was 182.54 in 1956, The all-time high in the Rail average was reached in 1929 at around the 190 level. From a technical viewpoint, a great many stocks indicate substantially higher levels over the longer term. At the same hme there are an equally large, if not larger, number of issues that have not yet built up sufficient accumulation bases to indicate an 1mportant upside move at this stage of the market pattern. This divergence makes it difficult to arrive at an objective for the Industrial average at the moment. It is why this letter has, for the last year, stressed the importance of individual issues We continue to believe that the market is in a broad accumulation area that is not yet completed. This will result in wide swil'lgs back and forth, but during this period individual issues will move in the individual trends of the1r own, The only importance oti the averages at this stage of the market pattern 1S the market backgroun9ri,t cr a e e averages are moving upward, as they have been doing for the ,t vorable background allows stocks with favorable fundamentals and technil\arJ,atter 0 move ahead at a greater rate than the averages, and even reach new uring such periods, the stocks with unfavorable fundamentals and pt s very modest advances or move sideways –When the averages arem' – ii. ' w ;A';', as they werEnrt'Jun'e and'July; –the — unfavorable background push t s ' fundamentals down at a faster rate with favorable fundam t continue for quite as an intermediate u r in e gingly, or move sidewise. This type of action may resent position of the market is probably best described ng term sidewise movement. For the short erm, the sharp rally of the past fourteen trading days has brought some of our shorter t rm indicators into temporarily overbought territory, This could probably result in a sidewise movement in some of the leaders of the recent rise and a rotation of strength into some of the background groups. We have not mentioned our long term breadth index recently. Th1S is because it has continued to move up and down with the market, The breadth index becomes important only when there is a divergence between its action and the action of the averages. The breadth index reached its high with the Dow-Jones Industrials in June and its low with the Industrials late in July. It has rallied with the Industrials during the past two weeks. Its rate of advance has not been quite as steep as the advance in the Industrial average, but we do not consider this of too much significance. The important thing is that there has been no d1vergence. With the averages again in hailing distance of the 1961 high, it will be important to watch the action of the breadth index over the next several weeks. In the past, this indicator has usually given a warning signal quite some time before an important market decline. Until there is a divergence between breadth and the averages, we do not believe the market is vulnerable to an important downside movement. Dow-Jones Ind. 719.32 Dow-Jones Rails 176. 31 EDMUND W. TABELL WALSTON & CO. INC. 1 hi! I'1nrket lettet IS lIot, and uncle\ no ClrClIlll!tance; I' to he \led a, nn ..fIel III -.eli 0\ n hCLt.ltln tn Inl .uIY '('('\11 It Ie-. I erci re,1 1.. hel ('In The mfl 111.111,, ontfllllc.l h('rcin IS IInlI!Uflrf.n!cctl n to nCCUIII(Y 01 linn the fUllllhl!ll! thclcur nut, and nn 10 to I'e ,UII'-tIUCf! 11…. II IC\llc…entfl \1(11\ bv Wnls\on &. C,), Inl' All c,,prCSblnn5 (If Ulllnwn 1\1(' -.uiJl(t to ('h,\lll-!'' '\I\hul nuh,e Wal-,\oll &. Cu. Jill'. nlld OnIlCI … DllcllO! … lind Em,,oycl.'s thcl'wf. IIcll ,ln,1 nl.lY hu\C' an intCl'cst lrl the lCCIJlitlC nWllbon …. hIlll J'hJ )JJ,uht'i Jt'IIt') ,.. wtendl) .Im) ,l'''toutl'/j nll'Il')Y II .. II /.CIIl'/1I1, mformul (nmmentary on dny to ,1.1), m,trl..N … IlJld nnt no; n e(Jnll.lcle Ilnnh. A,ldlttIl.!I mf, tlUIllUl1 \\ Ith 'C'-pel t tn uny …('('lIlltl(''' ,erellc,l to he!eln Will hc ul'nIhcd uPun ,,.. ,UI