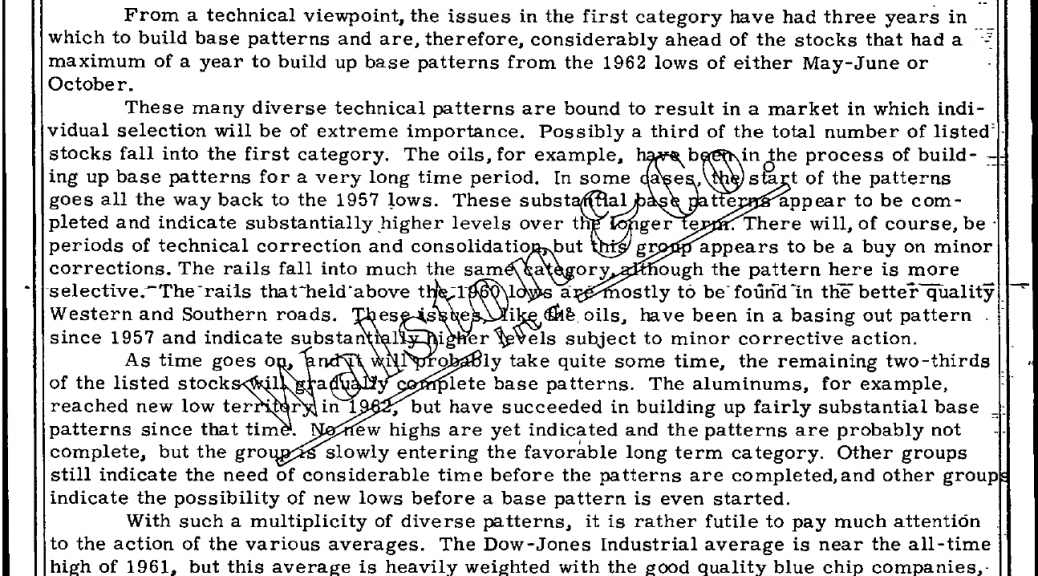 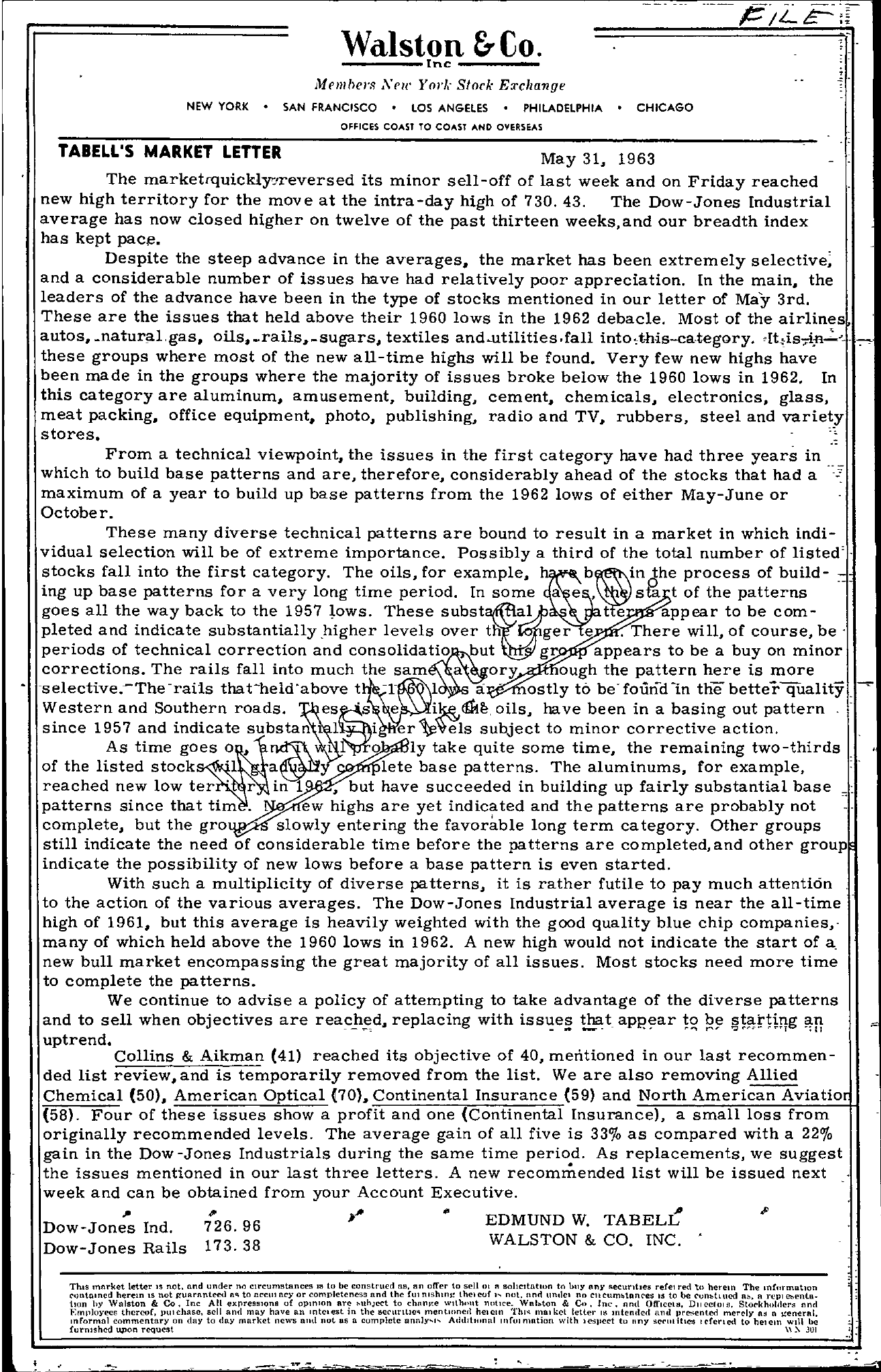 Walston &- Co. Inc Selt 1'ol'k Siork Exchange -; . NEW YORK SAN FRANCISCO LOS ANGELES PHILADELPHIA CHICAGO OFFICES COAST TO COAST AND OVERSEAS TABELL'S MARKET LETTER May 31, 1963 The marketrquicklyrreversed its minor sell-off of last week and on Friday reached new high territory for the move at the intra-day high of 730.43. The Dow-Jones Industrial average has now closed higher on twelve of the past thirteen weekS,and our breadth index has kept pac!'!. Despite the steep advance in the averages, the market has been extremely selective; and a considerable number of issues have had relatively poor appreciation. In the main, the leaders of the advance have been in the type of stocks mentioned in our letter of May 3rd. These are the issues that held above their 1960 lows in the 1962 debacle. Most of the airlines autos, natural.gas, oils.rails,sugars, textiles and,utilities,fall into,this-category. ,It.is,i;n.l., these groups where most of the newall-time highs will be found. Very few new highs have been made in the groups where the majority of issues broke below the 1960 lows in 1962. In this category are aluminum, amusement, building, cement, chemicals, electronics, glass, meat packing, office equipment, photo, publishing, radio and TV, rubbers, steel and variety stores. From a technical viewpoint, the issues in the first category have had three years in which to build base patterns and are, therefore, considerably ahead of the stocks that had a – maximum of a year to build up base patterns from the 1962 lows of either May-June or October. These many diverse technical patterns are bound to result in a market in which indi- vidual selection will be of extreme importance. Possibly a third of the total number of listed' . stocks fall into the first category. The oils, for example, ing up base patterns for a very long time period. In some a e , the process of buildsa t of the patterns goes all the way back to the 1957 These t e appear to be com- pleted and indicate substantially higher levels over tfi ger e ,There will, of course, be' periods of technical correction and but . gr appears to be a buy on minor corrections. The rails fall into much the sam a ough the pattern here is more that-held'above t m r1 a – ostly to be-fourid-in the betterquality Western and Southern roads. e oils, have been in a basing out pattern since 1957 and indicate substan r 1 i er subject to minor corrective action. As time goes 0, of the listed stock '1 1 I 0 ly take quite some time, the remaining two-thirds lete base patterns. The aluminums, for example, reached new low ter' r in 1 ,but have succeeded in building up fairly substantial base. ew highs are yet indicated and the patterns are probably not complete, but the gro slowly entering the favorable long term category. Other groups still indicate the need of considerable time before the patterns are completed, and other group indicate the possibility of new lows before a base pattern is even started. With such a multiplicity of diverse patterns, it is rather futile to pay much attention to the action of the various averages. The Dow-Jones Industrial average is near the all-time high of 1961, but this average is heavily weighted with the good quality blue chip many of which held above the 1960 lows in 1962. A new high would not indicate the start of new bull market encompassing the great majority of all issues. Most stocks need more time to complete the patterns. We continue to advise a policy of attempting to take advantage of the diverse patterns and to sell when objectives are replacing with !!!at !!n uptrend. Collins & Aikman (41) reached its objective of 40, mentioned in our last recommen- ded list review, and is temporarily removed from the list. We are also removing Allied Chemical (50), American Optical (70), Continental Insurance (59) and North American Aviatio (58). Four of these issues show a profit and one (Continental Insurance), a small loss from originally recommended levels. The average gain of all five is 33 as compared with a 22/0 gain in the Dow -Jones Industrials during the same time period. As replacements, we suggest the issues mentioned in our last three letters. A new recommended list will be issued next week and can be obtained from your Account Executive. Dow-Jones Ind. 7'26.96 Dow-Jones Rails 173. 38 Y' – EDMUND w. TABELL WALSTON & CO. INC. ThiS mnrket letter IS not. and under no Circumstances IS to be construed as. an offer to sell III n soliCitation to bllY nny !';ecurllies retel red 'to herein The In!nrmatJon r.mtnlTl('d herem IS not guaranteed a .. to UCCIlI acy or completeness and the fUl nlshJnIl thelwf 1-. not. lind untlel no CllCUmbtllnN!S 11 to be ('Om,tllled Rb. R rCI)le..cntll tlOn by Walston & Co, Inc All exnreSSlonB uf opInion are to chnnJ.'e wllhnut IwtJ('C. Wah,ton & en. Inc, flnd OffICNIl. DlIeetOls, Sto('khtltders and Employees thcrcor. pUlchase, sell and may have an Intclcst in the scrllrllle'l mcntlllncl\ hClcln Thl' malkct lettcr IS mtended und preented merely as a J,enerfll. mrormal commentary on day to day market news and not us a cumplete Adtlitltlnlllilifulmntion with 1('Sllect tu IIny sc'ulitleo; Iderled to helem Will be !urmshed upon request \\-.. JOl —.