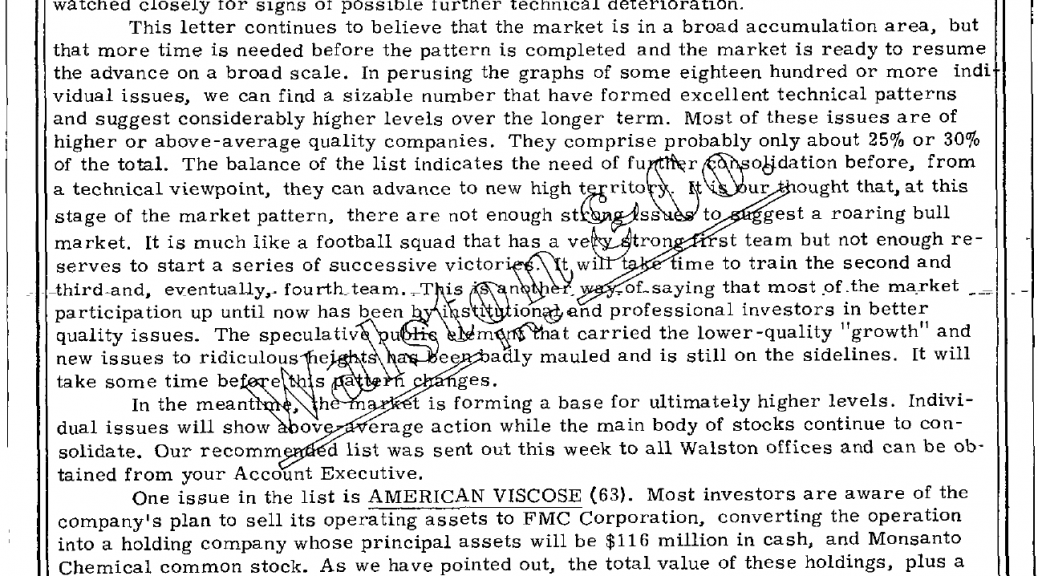 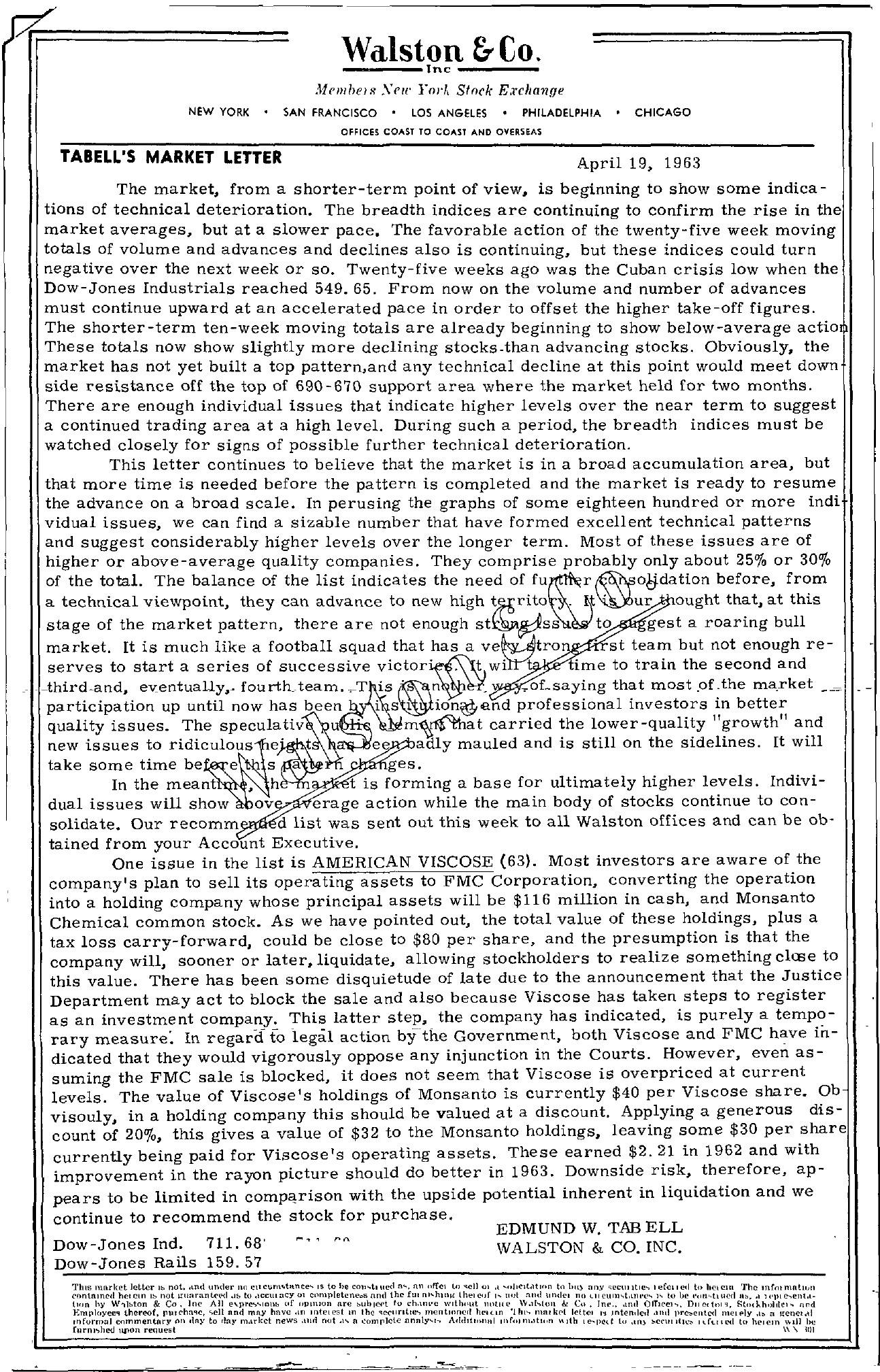 Wdlston &- Co. Inc MemleIR Xel/' rod, Stock Euilange NEW YORK SAN FRANCISCO LOS ANGelES PHILADELPHIA CHICAGO OFFICES COAST TO COAST AND OVERSEAS TABELL'S MARKET LETTER April 19, 1963 The market, from a shorter-term point of view, is beginning to show some indica- tions of technical deterioration. The breadth indices are continuing to confirm the rise in the market averages, but at a slower pace. The favorable action of the twenty-five week moving totals of volume and advances and declines also is continuing, but these indices could turn negative over the next week or so. Twenty-five weeks ago was the Cuban crisis low when the Dow-Jones Industrials reached 549.65. From now on the volume and number of advances must continue upward at an accelerated pace in order to offset the higher take-off figures. The shorter-term ten-week moving totals are already beginning to show below-average actio These totals now show slightly more declining stocksthan advancing stocks. Obviously, the market has not yet built a top pattern,and any technical decline at this point would meet down side resistance off the top of 690-670 support area where the market held for two months. There are enough individual issues that indicate higher levels over the near term to suggest a continued trading area at a high level. During such a period, the breadth indices must be watched closely for signs of possible further technical deterioration. This letter continues to believe that the market is in a broad accumulation area, but that more time is needed before the pattern is completed and the market is ready to resume the advance on a broad scale. In perusing the graphs of some eighteen hundred or more indi vidual issues, we can find a sizable number that have formed excellent technical patterns and suggest considerably higher levels over the longer term. Most of these issues are of higher or above-average quality companies. They comprise probably only about 250/0 or 300/0 of the total. The balance of the list indicates the need of before, from a technical viewpoint, they can advance to new high . ought that, at this stage of the market pattern, there are not enough to gest a roaring bull market. It is much like a football squad that has a st team but not enough re- serves to start a series of successive wfiYa ime to train the second and -third-and, eventually, fourth participation up until now has been is i oLsaying that most 9f the market professional investors in better quality issues. The new issues to ridiculous carried the lower-quality growth and e adly mauled and is still on the sidelines. It will take some time be e s a g e s . In the meant h t is forming a base for ultimately higher levels. Indivi- dual issues will show overage action while the main body of stocks continue to con- solidate. Our recomm d list was sent out this week to all Walston offices and can be ob- tained from your Account Executive. One issue in the list is AMERICAN VISCOSE (63). Most investors are aware of the company's plan to sell its operating assets to FMC Corporation, converting the operation into a holding company whose principal assets will be 116 million in cash, and Monsanto Chemical common stock. As we have pointed out, the total value of these holdings, plus a tax loss carry-forward, could be close to 80 per share, and the presumption is that the company will, sooner or later, liquidate, allowing stockholders to realize something cIcse to this value. There has been some disquietude of late due to the announcement that the Justice Department may act to block the sale and also because Viscose has taken steps to register as an investment company. This latter step, the company has indicated, is purely a temporary measure In regard fo legal action by the Government, both Viscose and FMC have in- dicated that they would vigorously oppose any injunction in the Courts. However, even assuming the FMC sale is blocked, it does not seem that Viscose is overpriced at current levels. The value of Viscose's holdings of Monsanto is currently 40 per Viscose share. Ob visouly, in a holding company this should be valued at a discount. Applying a generous discount of 200/0, this gives a value of 32 to the Monsanto holdings, leaving some 30 per share currently being paid for Viscose's operating assets. These earned 2.21 in 1962 and with improvement in the rayon picture should do better in 1963. Downside risk, therefore, ap- pears to be limited in comparison with the upside potential inherent in liquidation and we continue to recommend the stock for purchase. Dow-Jones Ind. 711. 68' Dow-Jones Rails 159.57 EDMUND W. TAB ELL WALSTON & CO. INC. reiThiS markct letter I' not. ,lnd under no co IS to he COT,,,tl ued I', an ffc) to 'I'll (l ,\ ….. jICIt.ltlll t'l hI!) any … 1erel! ed to hc\c\1l The lnfm mnhn contained em I! not I!lmrant('('(1 .Ib to .ICCUIlCY OJ Cllmpletcnes and the fUi Ihel cur I.. Illlt nnd IIllIlel IlO '-II elllll ..t,lllt'l''' to he lied IIh, .1 1t'IH tum hy \\1h,ton & Co, Ine All (If Pillion are ,uhle… t to ch,lIu'c Without lllltltC /,. C'I, Int'., .tntl 01Tlceh, Stu,khlJlllcl-. '1nd Employcc, ther('Qf, 'ell and maY have .Ill lntclcst III the ,,,(,llntle mcntlnncrl hel'-ln lllrukpt let tel )ntcn,1c,1 ,Inti pre,cntcd mClply .Ih I Informnl cnmmentnry on ,Iny to ,jay m,lrkct news ,\Uri not .1'-, n I.'omplelc nnlliYh A.I,htmnlll Inftlllhn \Ilth 1''''PNt tu ,Ill to helem he furnt,hed lIl10n request \\ \ II))