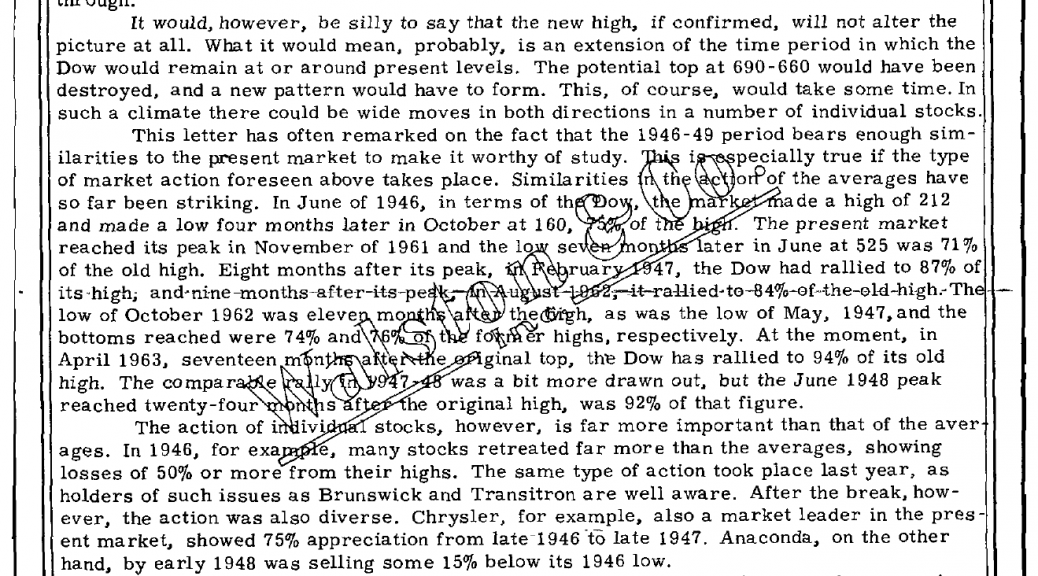 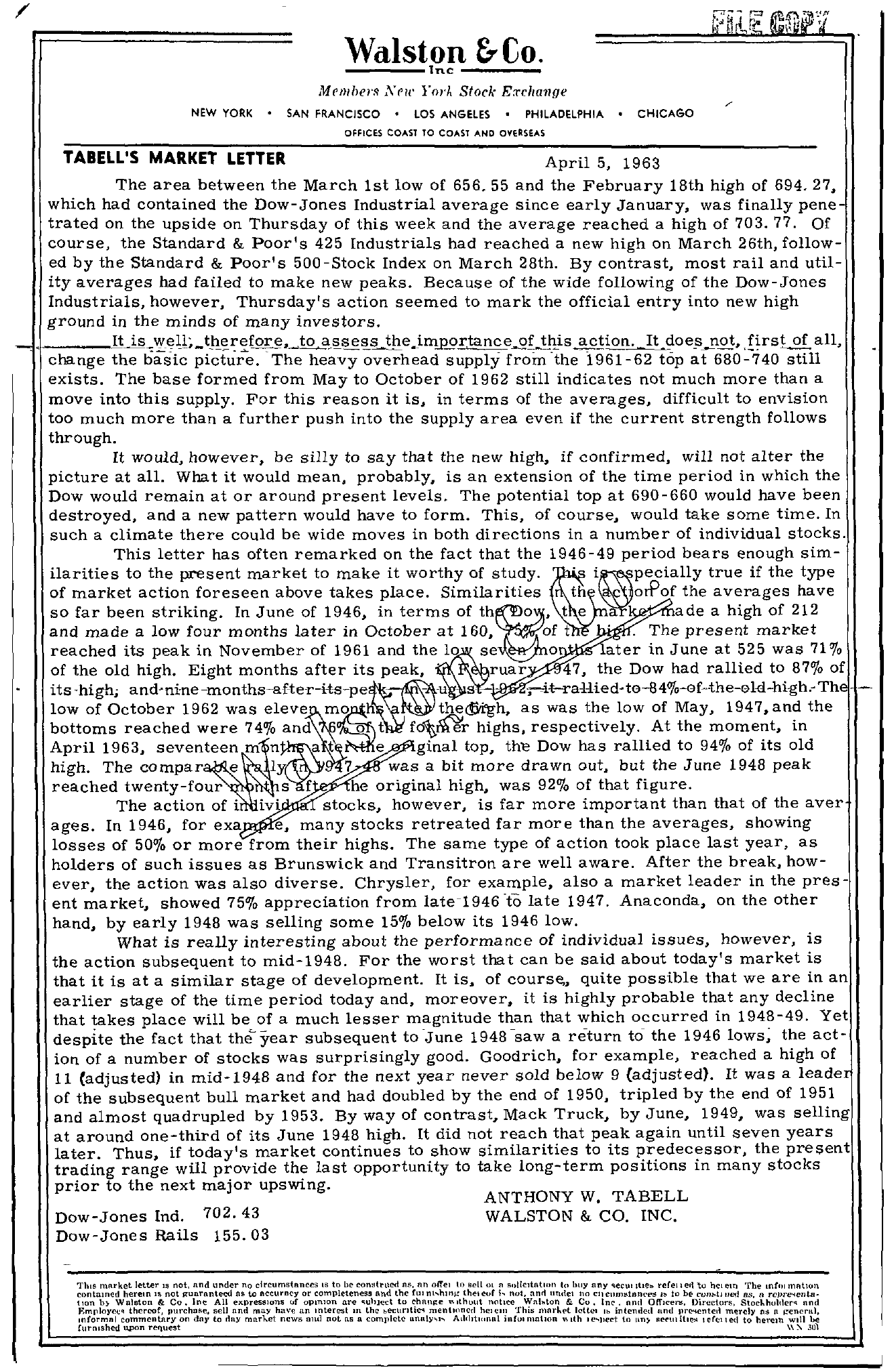 ./ Walston &Co. –;.;……. Inc ;,….;;…..;…;..; Memie1'R Sell' 10,.1, Stock Exchange NEW YORK SAN FRANCISCO LOS ANGELES PHILADELPHIA CHICAGO OFFICES COAST TO COAST AND oveRseAS TABELL'S MARKET LETTER April 5, 1963 The area between the March 1st low of 656.55 and the February 18th high of 694.27, which had contained the Dow-Jones Industrial average since early January, was finally pene trated on the upside on Thursday of this week and the average reached a high of 703. 77. Of course, the Standard & Poor's 425 Industrials had reached a new high on March 26th, follow- ed by the Standard & Poor's 500-Stock Index on March 28th. By contrast, most rail and util- ity averages had failed to make new peaks. Because of the wide following of the Dow-Jones Industrials, however, Thursday's action seemed to mark the official entry into new high ground in the minds of many investors. the.inmortance of this action. It does not, first of all, change the basic picture. The heavy o;-e;head 196162top exists. The base formed from May to October of 1962 still indicates not much more than a move into this supply. For this reason it is, in terms of the averages, difficult to envision too much more than a further push into the supply area even if the current strength follows through. It would, however, be silly to say that the new high, if confirmed, will not alter the picture at all. What it would mean, probably, is an extension of the time period in which the Dow would remain at or around present levels. The potential top at 690-660 would have been destroyed, and a new pattern would have to form. This, of course, would take some time. In such a climate there could be wide moves in both directions in a number of individual stocks. This letter has often remarked on the fact that the 1946-49 period bears enough sim- ilarities to the present market to make it worthy of study. of market action foreseen above takes place. Similarities th true if the type oRof the averages have so far been striking. In June of 1946, in terms of and made a low four months later in October at 160, tea ade a high of 212 of t ' . The present market reached its peak in November of 1961 and of the old high. Eight months after its peak, se 0 ater in June at 525 was 71 ruar 47, the Dow had rallied to 87 of its-high; s ,-,H-Tal-lied-to-84-ofAhe-old-hlgh.-Th low of October 1962 was bottoms reached were 74 and 0t as was the low of May, 1947,and the highs, respectively. At the moment, in April 1963, seventeen m high. The compar e lyj e ginal top, Dow has rallied to 94 of its old 7 was a bit more drawn out, but the June 1948 peak reached twenty-four The action of i s f he original high, was 92 of that figure. stocks, however, is far more important than that of the aver ages. In 1946, for exa e, many stocks retreated far more than the averages, showing losses of 50 or more from their highs. The same type of action took place last year, as holders of such issues as Brunswick and Transitron are well aware. After the break, however, the action was also diverse. Chrysler, for example, also a market leader in the pres- ent market, showed 75 appreciation from late-1946 'to late 1947. Anaconda, on the other hand, by early 1948 was selling some 15 below its 1946 low. What is really interesting about the performance of individual issues, however, is the action subsequent to mid-1948. For the worst that can be said about today's market is that it is at a similar stage of development. It is, of course quite possible that we are in an earlier stage of the time period today and, moreover, it is highly probable that any decline that takes place will be of a much lesser magnitude than that which occurred in 1948-49. Yet despite the fact that theL year subsequent to June 1948 'saw a return to the 1946 lows; the act- ion of a number of stocks was surprisingly good. Goodrich, for example, reached a high of 11 adjusted) in mid-1948 and for the next year never sold below 9 adjusted. It was a leade of the subsequent bull market and had doubled by the end of 1950, tripled by the end of 1951 and almost quadrupled by 1953. By way of contrast, Mack Truck, by June, 1949, was selling at around one-third of its June 1948 high. It did not reach that peak again until seven years later. Thus, if today's market continues to show similarities to its predecessor, the present trading range will provide the last opportunity to take long-term positions in many stocks prior to the next major upswing. ANTHONY W. TABELL Dow-Jones Ind. 702.43 WALSTON & CO. INC. Dow-Jones Rails 155.03 ThiS mnrket letter IS not, nnd under no circumstances IS to be eonstrtled n5, nn olTel to sell 01 solicltatloll to buy any ;eC\11 ItJe, relell ell to hel ('In The mtlll mntlon con tamed herem 11'1 not guaranteed as to accuracy or completeness and the CUI nl-.hlllj..(' thel cur nut. and unliel 110 ell It to b(l Cl)lll'oilUcd os, n tlUn b Walston & Co, Inc All expresslOns (Jt opllllon are ;uhlect to ehnlll!c \Hthuut nohee Wah,lon & Co. Ine. ancl OffIce!!! Directurs Slocl.hohler.. lind thercot, purchnllc, sell nnd mllY have an mterest III thc ecllntiC'l mentIOned 'fhis mnrl-.et Jettel ' intended lInd m'erelY n n J..('cnerlll, mformal commentary on dny to !IllY market news 3nd not as a complete Alilhtlnni IlIt01 mntlOn \\Ith 1('''llcct til setlllltl(tl Icfclled to herem Will be furnashed u,pon Tet)uest \\ 30)