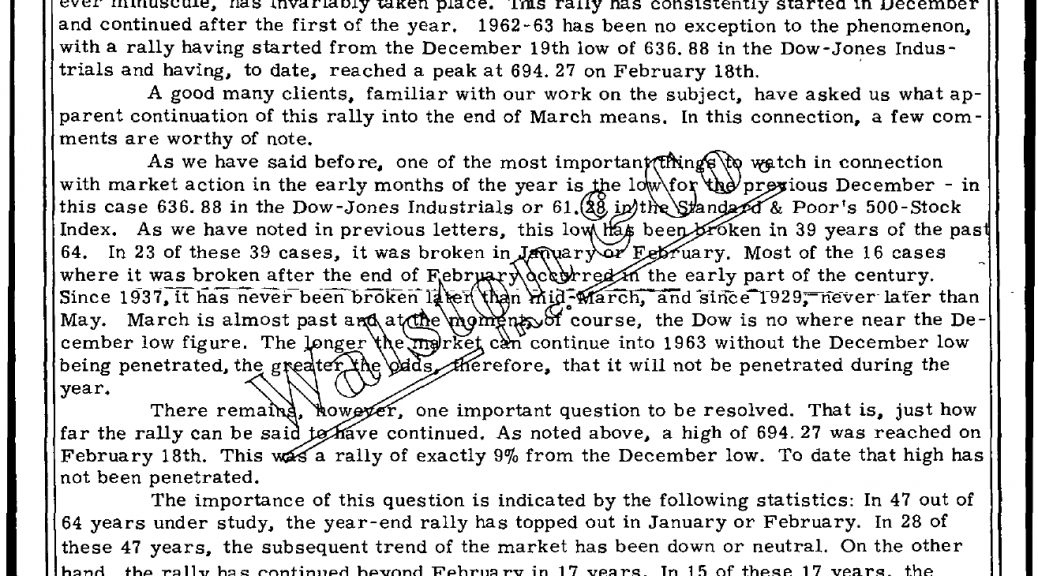 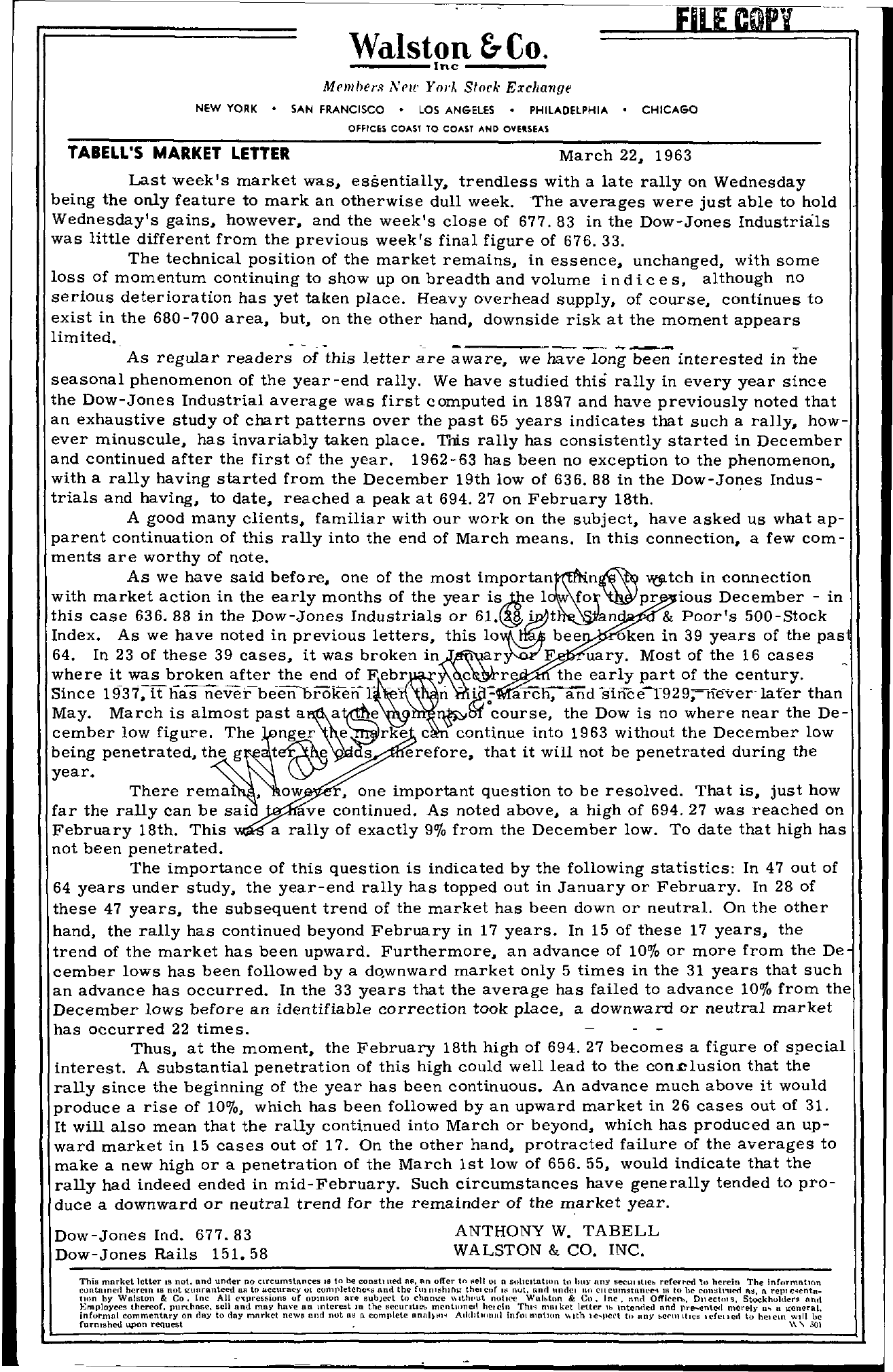 W—-a–l-s-tIonnc–&–C—o-. Member.. Xell' Yor'. Stock Euilange NEW YORK SAN FRANCISCO LOS ANGELES PHILAOELPHIA CHICAGO OFFICES COAST TO COAST AND ovEttSE.4.S TABELL'S MARKET LETTER March 22, 1963 Last week's market was, essentially, trendless with a late rally on Wednesday being the only feature to mark an otherwise dull week. 'The averages were just able to hold Wednesday's gains, however, and the week's close of 677. 83 in the Dow-Jones Industrials was little different from the previous week's final figure of 676.33. The technical position of the market remains, in essence, unchanged, with some loss of momentum continuing to show up on breadth and volume in d ice s, although no serious deterioration has yet taken place. Heavy overhead supply, of course, continues to exist in the 680 -700 area, but, on the other hand, downside risk at the moment appears limited. As regular readers of this letter are a ware, we havelong t;;;; interested in the seasonal phenomenon of the year -end rally. We have studied this rally in every year since the Dow-Jones Industrial average was first computed in 1897 and have previously noted that an exhaustive study of chart patterns over the past 65 years indicates that such a rally, how- ever minuscule, has invariably taken place. T'fIis rally has consistently started in December and continued after the first of the year. 1962-63 has been no exception to the phenomenon, with a rally having started from the December 19th low of 636.88 in the Dow-Jones Indus- trials and having, to date, reached a peak at 694.27 on February 18th. ' A good many clients, familiar with our work on the subject, have asked us what apparent continuation of this rally into the end of March means. In this connection, a few comments are worthy of note. As we have said before, one of the most in connection with market action in the early months of the year is)ge 1 fo ,Wpr ious December – in this case 636.88 in the Dow-Jones Industrials or an & Poor's 500-Stock Index. As we have noted in previous letters, this bee oken in 39 years of the pas 64. In 23 of these 39 cases, it was broken uary. Most of the 16 cases where it was broken after the end of Since 1937, it hasnever-be-en -w;c r the early part of the century. ri arcn, and -slncel-929; never later than May. March is almost past course, the Dow is no where near the De- cember low figure. The nger e rKe c continue into 1963 without the December low being penetrated, the g teGl\El s erefore, that it will not be penetrated during the year. There rema! r, one important question to be resolved. That is, just how far the rally can be sai ave continued. As noted above, a high of 694. 27 was reached on February 18th. This not been penetrated. a rally of exactly 9/0 from the December low. To date that high has The importance of this question is indicated by the following statistics In 47 out of 64 years under study, the year-end rally has topped out in January or February. In 28 of these 47 years, the subsequent trend of the market has been down or neutral. On the other hand, the rally has continued beyond February in 17 years. In 15 of these 17 years, the trend of the market has been upward. Furthermore, an advance of 10/0 or more from the De cember lows has been followed by a dqwnward market only 5 times in the 31 years that such an advance has occurred. In the 33 years that the average has failed to advance 10/0 from the December lows before an identifiable correction took place, a downward or neutral market has occurred 22 times. Thus, at the moment, the February 18th high of 694. 27 becomes a figure of special interest. A substantial penetration of this high could well lead to the that the rally since the beginning of the year has been continuous. An advance much above it would produce a rise of 10, which has been followed by an upward market in 26 cases out of 31. It will also mean that the rally continued into March or beyond, which has produced an upward market in 15 cases out of 17. On the other hand, protracted failure of the averages to make a new high or a penetration of the March 1st low of 656.55, would indicate that the rally had indeed ended in mid-February. Such circumstances have generally tended to pro- duce a downward or neutral trend for the remainder of the year. Dow-Jones Ind. 677.83 Dow-Jones Rails 151.58 ANTHONY W. TABELL WALSTON & CO. INC. This mnrket letter III not. nnd under no 19 to be consh \led ml, nn offer to 01 n snlicltntlUll ttl huy nny SecUlllLCb rde-ned ttl herein The Inrnrmnhon Cllntnlncrl herem III not J!lInrantccti all to nCClirncy 01 cOI'lllietcnc'ls nnd the rUI nlShln!! thel cur .s nut. anll Ilndcl nn CII 18 to be n repi tHin by Walston & Co. Inc Ali e'(pressions of OPinion are SUblCt't to chnll).!e \\Ith!,ut notice Wnlbil)n & Co. Inc. nnl Officen-.. DlIectms. anrl Employees thereof, punhnse. selland may have an mtcrest III the securltleo, mcntlne!1 hClcin 'fhl nlalket letter lb Intended nnd I\rcen\ed merely n n ).!cneral. informnl commentnry on day to day market news and not ns n comilletc AlldlhIIUI infolnlotl(,n \11th lCllcrt t4l1lnY bC(,1llltlC8 Idelle!lto beleln Will he upon request \\ '\ 3()1