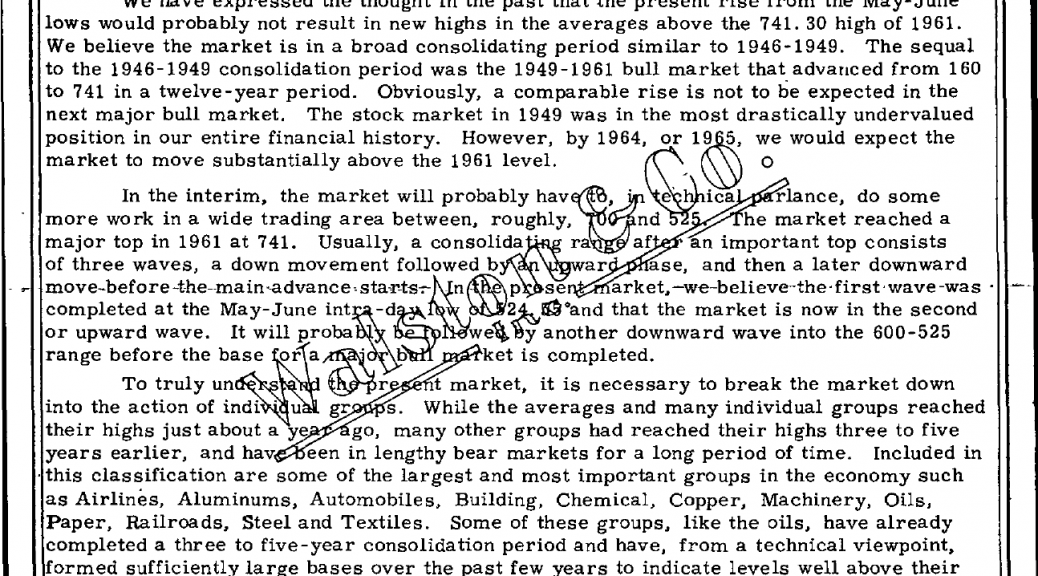 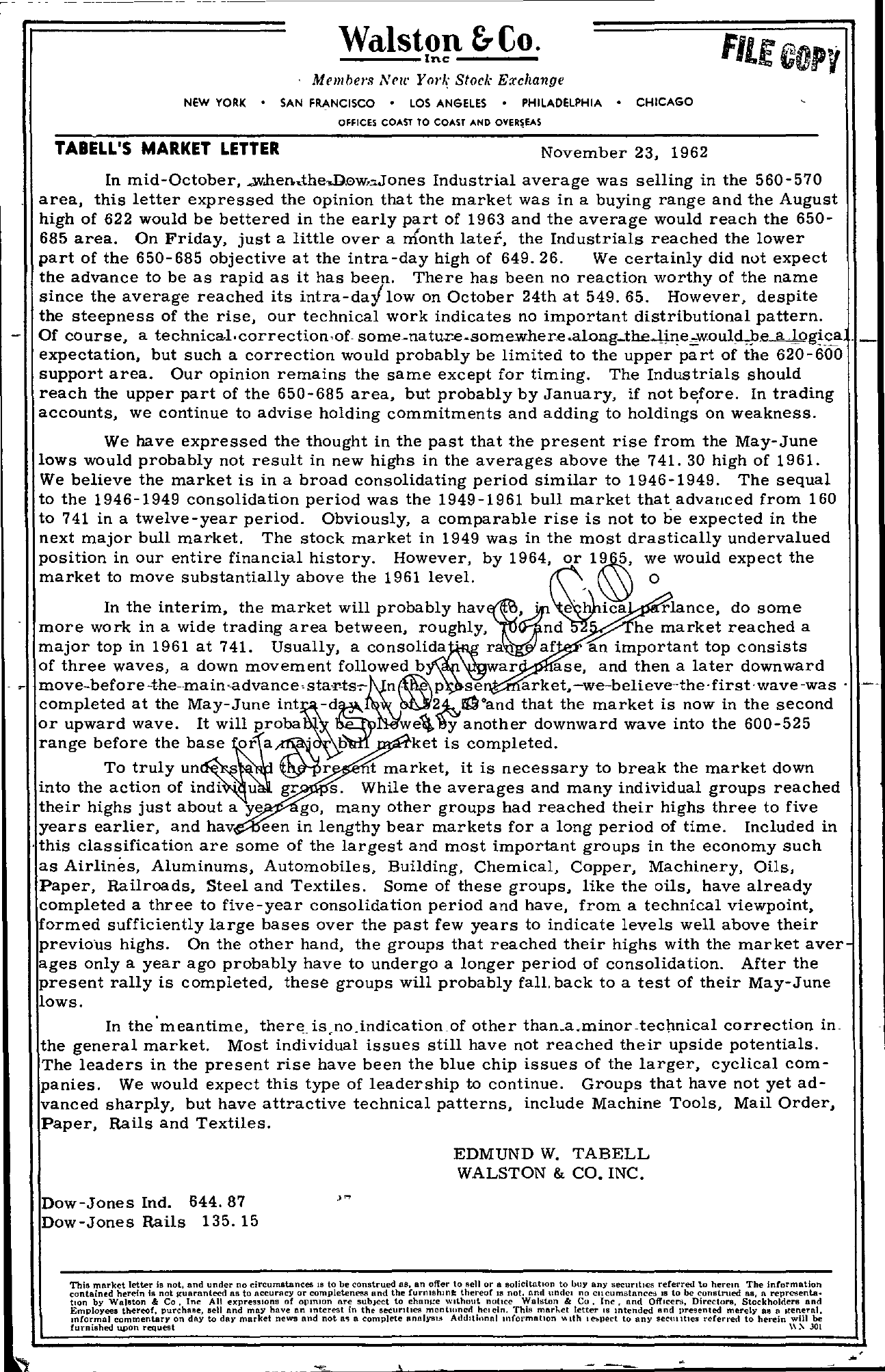 I – – I Wdlst1!!l&Co. FILE ;OPV Member. Nell' Stock Exchange NEW YORK SAN FRANCISCO LOS ANGELES PHILADELPHIA CHICAGO OFFICES COAST TO COAST AND TABEll'S MARKET lETTER November 23, 1962 In mid-October, Industrial average was selling in the 560-570 area, this letter expressed the opinion that the market was in a buying range and the August high of 622 would be bettered in the early part of 1963 and the average would reach the 650- 685 area. On Friday, just a little over a ntonth later, the Industrials reached the lower part of the 650-685 objective at the intra-day high of 649.26. We certainly did not expect the advance to be as rapid as it has been. There has been no reaction worthy of the name since the average reached its intra-dal low on October 24th at 549.65. However, despite the steepness of the rise, our technical work indicates no important distributional pattern. Of course, a technica.l.correction.of expectation, but such a correction would probably be limited to the upper part of the 620-600 support area. Our opinion remains the same except for timing. The Industrials should reach the upper part of the 650-685 area, but probably by January, if not bE\fore. In trading accounts, we continue to advise holding commitments and adding to holdings on weakness. We have expressed the thought in the past that the present rise from the May-June lows would probably not result in new highs in the averages above the 741. 30 high of 1961. We believe the market is in a broad consolidating period similar to 1946-1949. The sequal to the 1946-1949 consolidation period was the 1949-1961 bull market that advallced from 160 to 741 in a twelve-year period. Obviously, a comparable rise is not to tie expected in the next major bull market. The stock market in 1949 was in the most drastically undervalued position in our entire financial history. However, by 1964, or we would expect the market to move substantially above the 1961 level. 0 In the interim, the market will probably havli' e' ica rlance, do some more work in a wide trading area between, roughly, nd he market reached a major top in 1961 at 741. Usually, a ra af an important top consists of three waves, a down movement followed b ar ase, and then a later downward se arket,-we-believe-the'first'wave-was . completed at the May-June or upward wave. It will proba that the market is now in the second we\'8y another downward wave into the 600-525 range before the or Jj ket is completed. To truly un t market, it is necessary to break the market down into the action of indi . u gr s. While the averages and many individual groups reached their highs just about a ye go, many other groups had reached their highs three to five years earlier, and ha een in lengthy bear markets for a long period of time. Included in ,this classification are some of the largest and most important groups in the economy such as Airlines, Aluminums, Automobiles. Building. Chemical, Copper, Machinery, Oils, Paper, Railroads, Steel and Textiles. Some of these groups, like the oils, have already completed a three to five-year consolidation period and have, from a technical viewpoint, formed sufficiently large bases over the past few years to indicate levels well above their previoils highs. On the other hand, the groups that reached their highs with the market aver ages only a year ago probably have to undergo a longer period of consolidation. After the present rally is completed, these groups will probably fall, back to a test of their May-June lows. In the 'meantime, other than.a.minorteclmical correctton the general market. Most individual issues still have not reached their upside potentials. The leaders in the present rise have been the blue chip issues of the larger, cyclical com- panies. We would expect this type of leadership to continue. Groups that have not yet ad- vanced sharply, but have attractive technical patterns, include Machine Tools, Mail Order, Paper, Rails and Textiles. EDMUND W. TABELL WALSTON & CO. INC. Dow-Jones Ind. 644.87 Dow-Jones Rails 135. 15 ThiB market letter Is not, and under 110 circumstances IS to be construed itS, an offer to lIell or a flolicitntlOll to buy any seCUrities relet'red 'to herem The Information contained herein 18 not guaranteed as to accuracy or completeness nnd the iurnlshml! thereof 18 not. nnd undel no Cllcumstances IS to be construed 8S, 8 reprCllenta4 tlOn by Walston Co. Inc All expresSions of opInion are subject to chnnJ,e Without nohce Walston 8 Co. Inc. and Officers, Directors, Stockholders Dnd Employees thereof, purchaue, sellnnd may have an Interest In the SecUritIes mentwncrf heleln. This market letter IS IIltended ond Iresented merely a6 n ..eeneral. Informal commentary on day to day market news and not ao; a complete Additinnnlm(ol'mntlon Ith to any SeCtllltlCll rC!fcrred to herein will be furnished upon request ., 301 ,