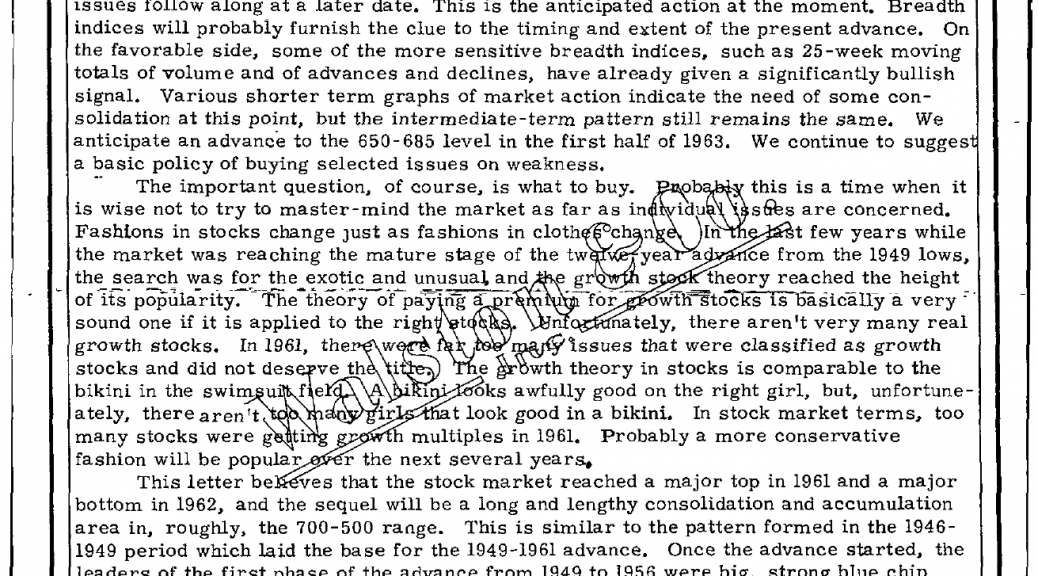 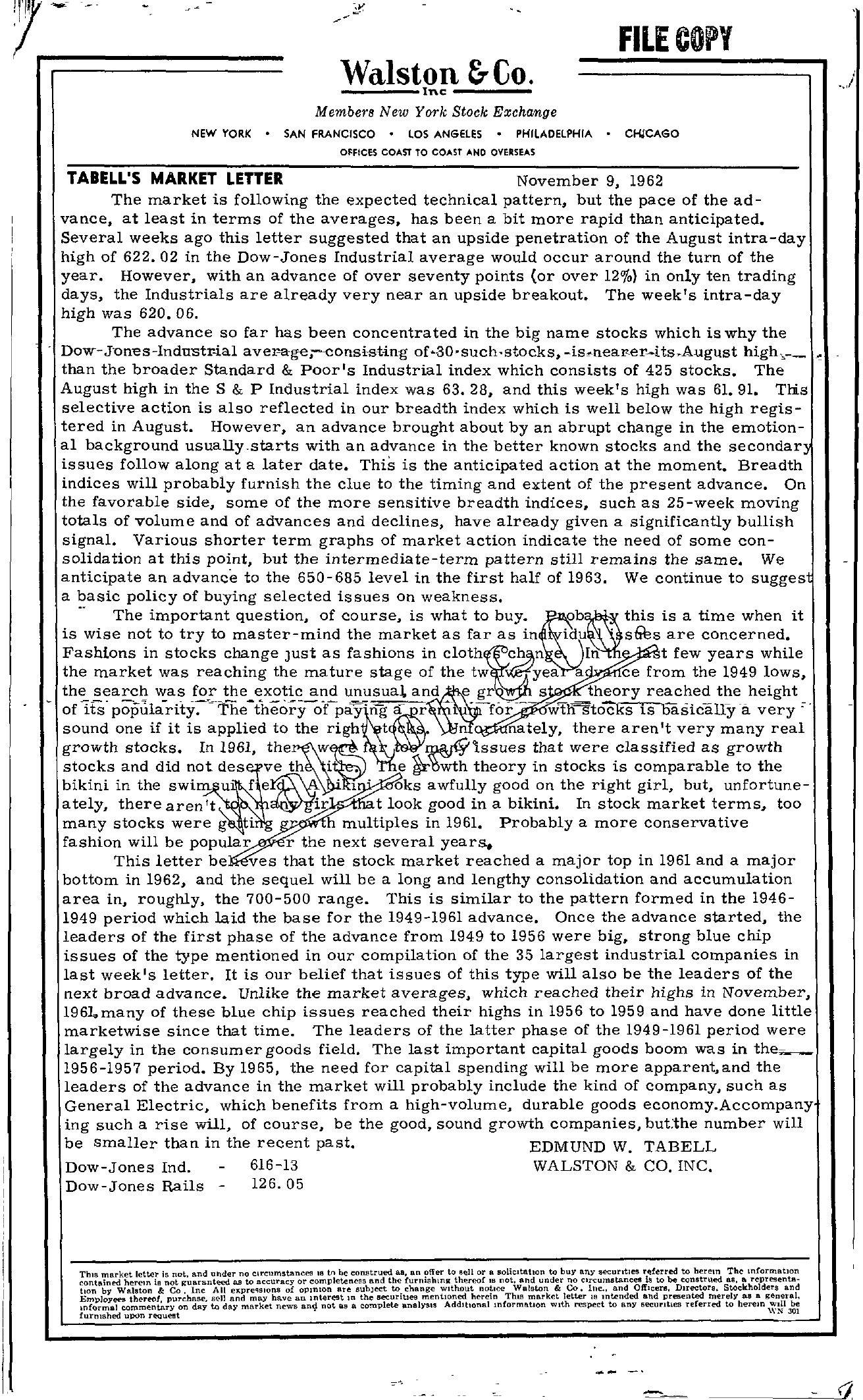 I.r Walston 5- Co. Inc FILE COpy Member8 New York Stock Exchange NEW YORK SAN FRANCISCO LOS ANGELES PHILADELPHIA CHICAGO OFFICES COAST TO COAST AND OVERSEAS TABELL'S MARKET LEnER November 9, 1962 The market is following the expected technical pattern, but the pace of the advance, at least in terms of the averages, has been a bit more rapid than anticipated. Several weeks ago this letter suggested that an upside penetration of the August intra-day high of 622.02 in the Dow-Jones Industrial average would occur around the turn of the year. However, with an advance of over seventy points (or over 120/0) in only ten trading days, the Industrials are already very near an upside breakout. The week's intra-day high was 620. 06. The advance so far has been concentrated in the big name stocks which is why the Dow-J-on-es-Industr-ial avel'a'ge;–consist-ing of-30such.stocks, high, than the broader Standard & Poor's Industrial index which consists of 425 stocks. The August high in the S & P Industrial index was 63.28, and this week's high was 61.91. This selective action is also reflected in our breadth index which is well below the high registered in August. However, an advance brought about by an abrupt change in the emotional background usually.starts with an advance in the better known stocks and the secondar issues follow along at a later date. This is the anticipated action at the moment. Breadth indices will probably furnish the clue to the timing and extent of the present advance. On the favorable side, some of the more sensitive breadth indices, such as 25-week mOving totals of volume and of advances and declines, have already given a significantly bullish signal. Various shorter term graphs of market action indicate the need of some consolidation at this point, but the intermediate-term pattern still remains the same. We anticipate an advance to the 650-685 level in the first half of 1963. We continue to sugges a basic policy of buying selected issues on weakness. .. The important question, of course, is what to buy. is wise not to try to master-mind the market as far as in idu . is a time when it are concerned. Fashions in stocks change Just as fashions in clothachn In t few years while the market was reaching the mature stage of the tw \(efyea a ce from the 1949 lows, the search was for the exotic and unusual, gr – of tis' r -r s theory reached the height w1lfStocks is oasicaUya very c sound one if it is applied to the righ t n nately, there aren't very many real growth stocks. In 1961, stocks and did not des ve th bikini in the swim u f a tely, there aren 't many stocks were g ti I!I!\l.rWissues that were classified as growth i. e theory in stocks is comparable to the . l' oks awfully good on the right girl, but, unfortune- t look good in a bikini. In stock market terms, too h multiples in 1961. Probably a more conservative fashion will be popular r the next several years. This letter be ves that the stock market reached a major top in 1961 and a major bottom in 1962, and the sequel will be a long and lengthy consolidation and accumulation area in, roughly, the 700-500 range. This is similar to the pattern formed in the 19461949 period which laid the base for the 1949-1961 advance. Once the advance started, the leaders of the first phase of the advance from 1949 to 1956 were big, strong blue chip issues of the type mentioned in our compilation of the 35 largest industrial companies in last week's letter. It is our belief that issues of this type will also be the leaders of the next broad advance. Unlike the market averages, which reached their highs in November, 1961.many of these blue chip issues reached their highs in 1956 to 1959 and have done little marketwise since that time. The leaders of the latter phase of the 1949-1961 period were largely in the consumer goods field. The last important capital goods boom was in the,-1956-1957 period. By 1965, the need for capital spending will be more apparent, and the leaders of the advance in the market will probably include the kind of company, such as General Electric, which benefits from a high-volume, durable goods economy.Accompany ing such a rise will, of course, be the gOOd, sound growth companies, butthe number will be smaller than in the recent past. EDMUND W. TABELL Dow-Jones Ind. 616-13 Dow-Jones Rails – 126.05 WALSTON & CO. INC. .j ThIS market letter is flot. and under no cueumstances 18 ttl be construed as, an !lffer to S(lli or a soliCitatIOn to buy any secUrities ff!ferred to herem The mformatlon contained herem 10 not WI to accuracy or completeness and the furnishing thereof 18 not, and under no circumstances is to be construf!d so, a. representa- tIOn by Walston & Co, Inc All eXpreqSlOnS of OPiniOn are subject to. change Without Walston & Co, ll1C., and Officers, Directors. Stockholders snd Employees thereof purchase sell and may have an Interest In the securitIes mentlOncd herein ThIS market letter IS mtended and presented merely as a general. \Wmformai on dai to day market news not as a complete analysts Additional mform!!.tlon With respect to sny SecUrities referred to herein furmshed uJXn reQuest