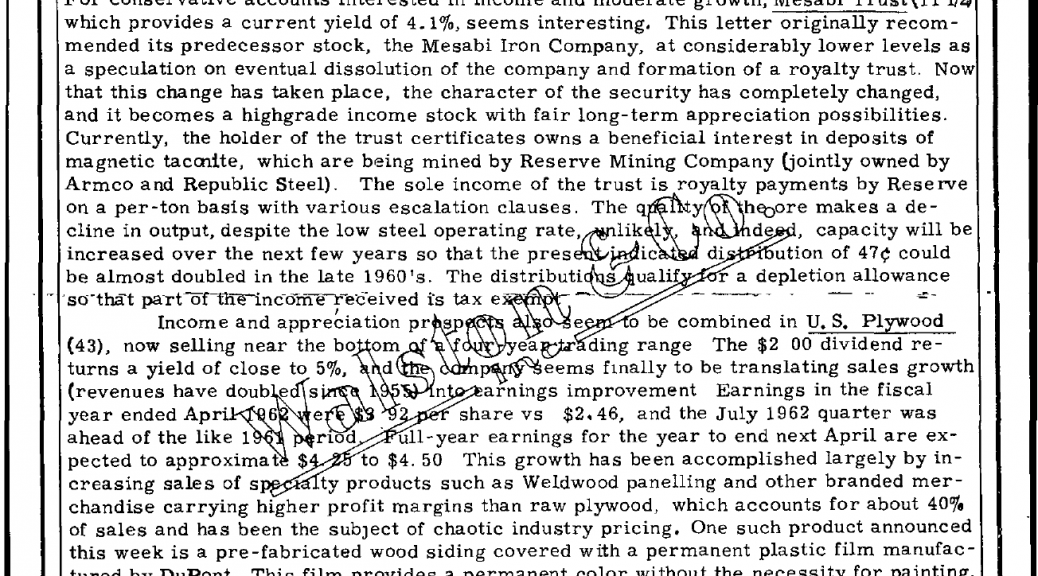 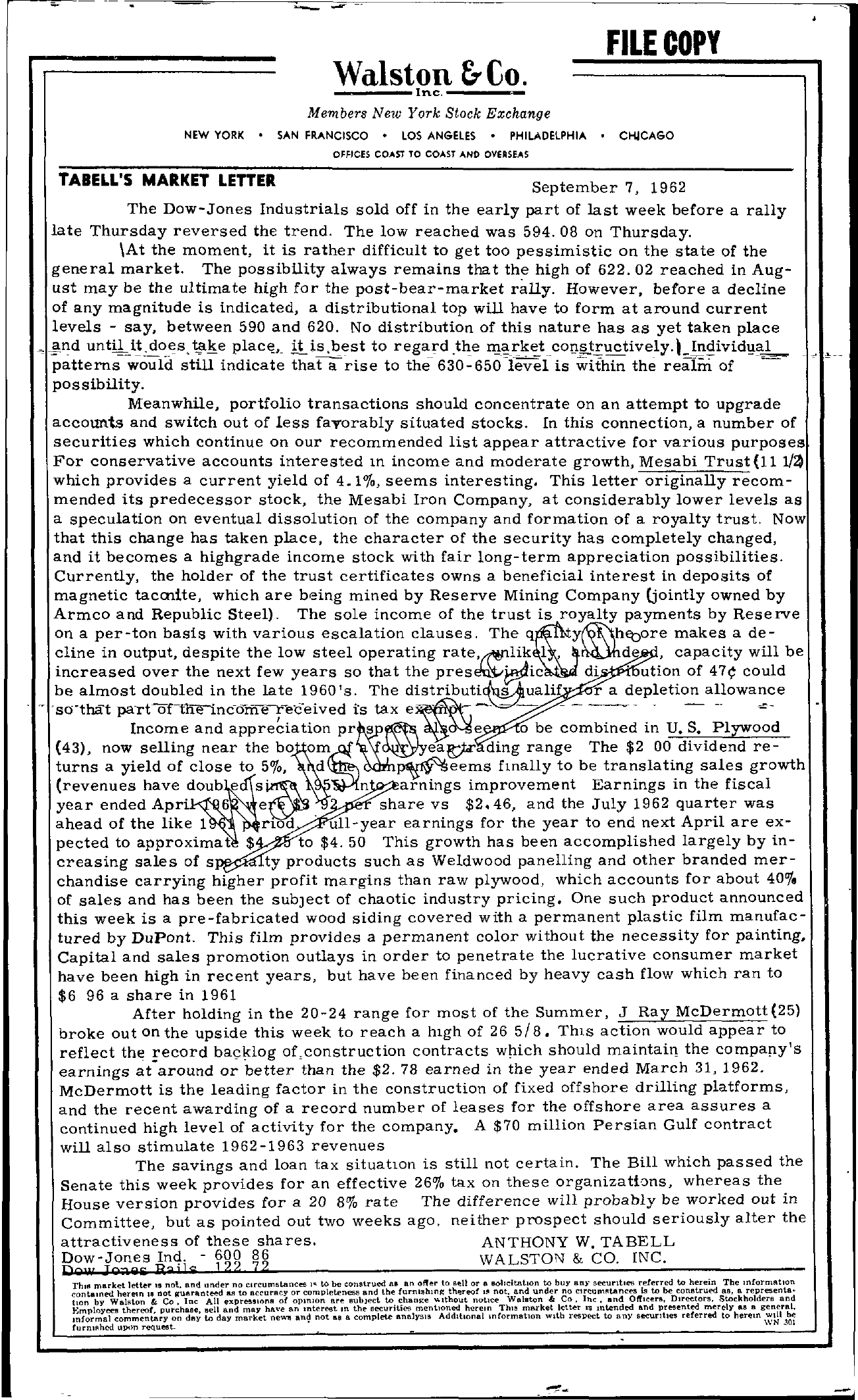 Walston &Co. Inc. — Members New York Stock Exchange FILE COpy NEW YORK SAN FRANCISCO LOS ANGELES PHILADELPHIA CHlCAGO OFFICES COAST TO COAST AND OVERSEAS TABELL'S MARKET LETTER September 7, 1962 The Dow-Jones Industrials sold off in the early part of last week before a rally late Thursday reversed the trend. The low reached was 594.08 on Thursday. \At the moment, it is rather difficult to get too pessimistic on the state of the general market. The possibility always remains that the high of 622.02 reached in Aug- ust may be the ultimate high for the post-bear-market rally. However, before a decline of any magnitude is indicated, a distributional top will have to form at around current levels – say, between 590 and 620. No distribution of this nature has as yet taken place it iS,best to regard .the c01.structively.LIndivid1!al patterns would still indicate that a-rise to the 630 650-ievei is the of -0 possibility. Meanwhile, portfolio transactions should concentrate on an attempt to upgrade accounts and switch out of less favorably situated stocks. In this connection, a number of securities which continue on our recommended list appear attractive for various purposes For conservative accounts interested in income and moderate growth, Mesabi Trust llU2;J which provides a current yield of 4.10/0, seems interesting. This letter originally recom- mended its predecessor stock, the Mesabi Iron Company, at considerably lower levels as a speculation on eventual dissolution of the company and formation of a royalty trust. Now that this change has taken place, the character of the security has completely changed, and it becomes a highgrade income stock with fair long-term appreciation possibilities. Currently, the holder of the trust certificates owns a beneficial interest in deposits of magnetic taccnite, which are being mined by Reserve Mining Company (jointly owned by Armco and Republic Steel). The sole income of the trust is royalty payments by Rese rYe on a per-ton basis with various escalation clauses. The makes a de- cline in output, despite the low steel operating rate'(iWllik l, capacity will be increased over the next few years so that the of 47 could be almost doubled in the late 1960's. The – 'so-that r a depletion allowance be u.;- (43), now selling near the turns a yield of close to 50/0, d ding range The 2 00 dividend reflnally to be translating sales growth (revenues dub e year ended Apri 6 n arnings improvement Earnings in the fiscal ra.. share vs 2.46, and the July 1962 quarter was ahead of the like 1 rlOd' ull-year earnings for the year to end next April are ex- pected to approximat to 4.50 This growth has been accomplished largely by in- creasing sales of s ty products such as Weldwood panelling and other branded mer- chandise carrying higher profit margins than raw plywood, which accounts for about 400/. of sales and has been the subJect of chaotic industry pricing. One such product announced this week is a pre-fabricated wood siding covered with a permanent plastic film manufac- tured by DuPont. This film provides a permanent color without the necessity for painting. Capital and sales promotion outlays in order to penetrate the lucrative consumer market have been high in recent years, but have been financed by heavy cash flow which ran to 6 96 a share in 1961 After holding in the 20-24 range for most of the Summer, J Ray McDermott (25) broke out on the upside this week to reach a high of 26 5/8. ThiS action would appear to reflect the record backlog oLconstruction contracts which should maintain the compap.y's earnings at around or better than the 2. 78 earned in the year ended March 31,1962. McDermott is the leading factor in the construction of fixed offshore drilling platforms, and the recent awarding of a record number of leases for the offshore area assures a continued high level of activity for the company. A 70 million Persian Gulf contract will also stimulate 1962-1963 revenues The savings and loan tax situatlOn is still not certain. The Bill which passed the Senate this week provides for an effective 260/0 tax on these organizations, whereas the House version provides for a 20 8 rate The difference will probably be worked out in Committee, but as pointed out two weeks ago. neither prospect should seriously alter the attractiveness of these shares. ANTHONY W. TABELL Dow-Jones Inq. – 6,QQ Donr JOPQ. Ralls 44 4 WALSTON & CO. INC. Thill market letter 18 not. and under no clrcumswncf!S . to be construed 8S an offer to s(!U or a sohcitahon to buy any securlbes leferred to herein The Information contained herein I not guaranteed II..!! to accuracy or completeness and the furnl8hIng thereof not. and under no ClrCUmt'tances IS to be construed 88, a representa- tiOn by Waillton I Co. Inc All expresslOnB of opInion art! subject to chanle \\.lthout notice Wal8ton I Co. Inc. Ilnd Oft'l(ers, DIrectors, Stockholders and t;mp!oyces thereof, purchase, Bell and may have an mterest an the securities mentlone! herein ThiS mru-ket letter IS mtended and presented merely lUI a general. mformal commentary on day to day market neW!! and not IIoS a complete analYSIS Additional informatIon With respect to flny securities referred to herem will be turmflhed uJl1m r e q u e s t . ' WN 301