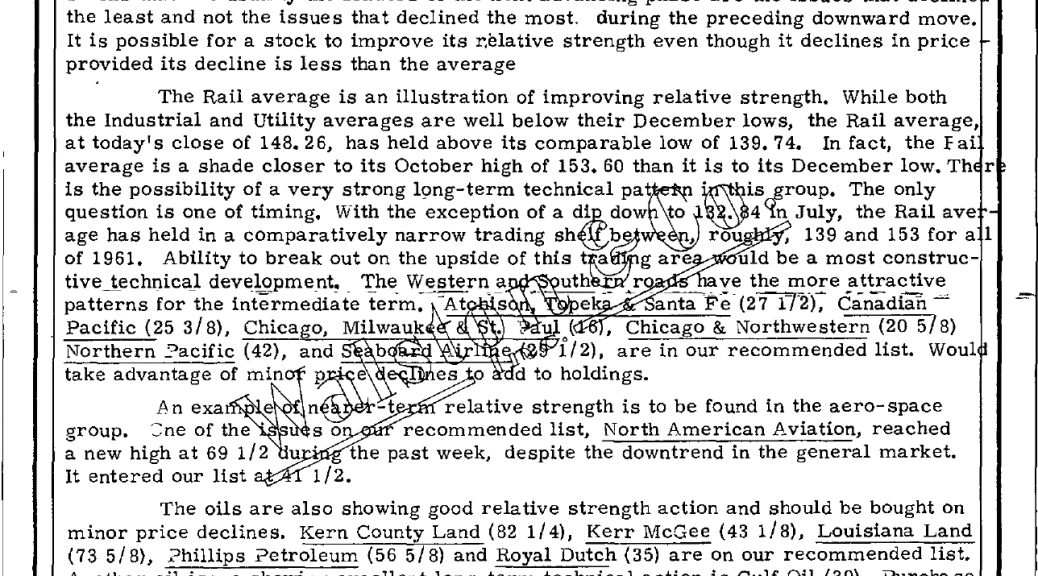 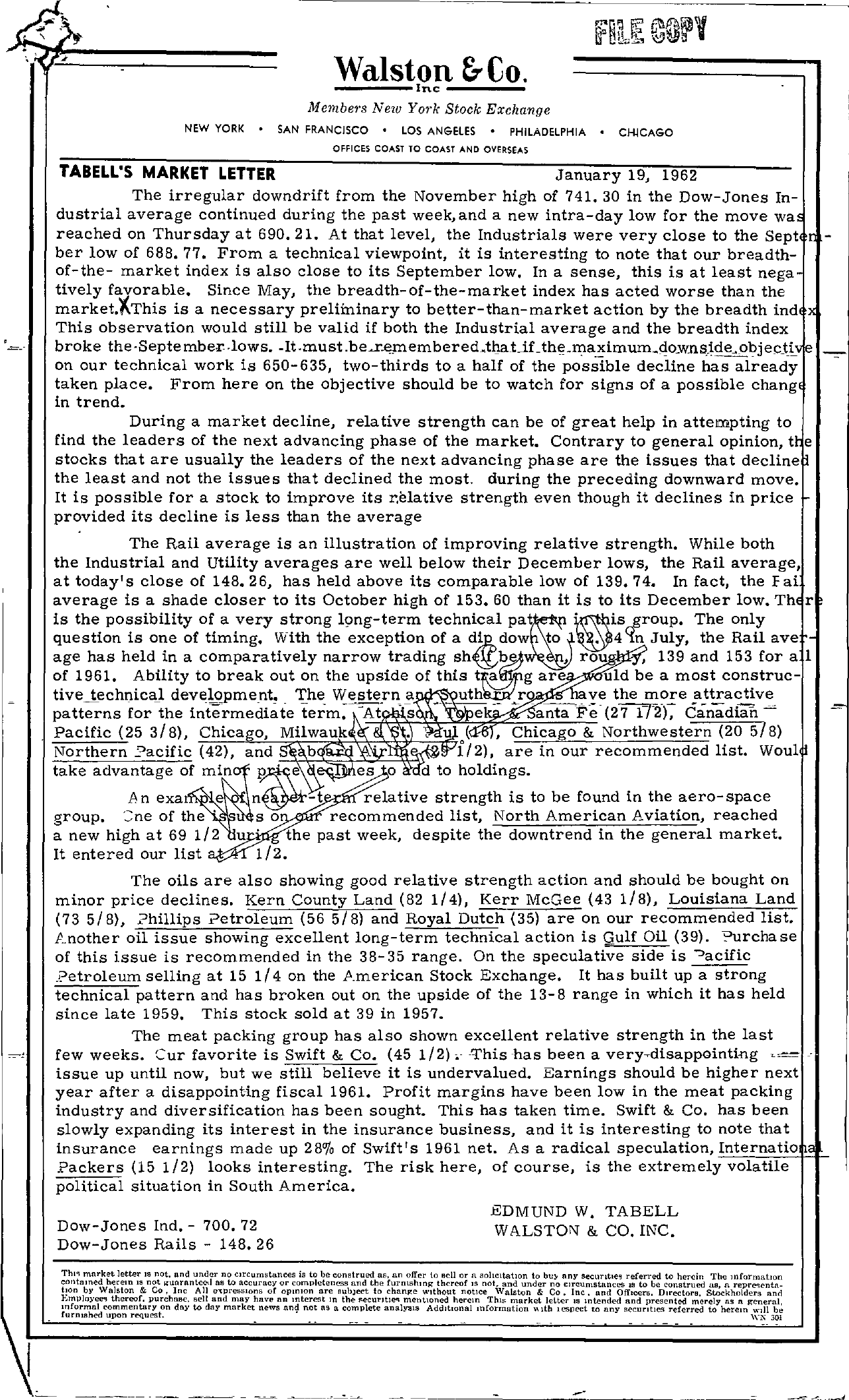 NEW YORK Walston &Co. —–Inc —- M embej's New Y oTk Stock Exchange SAN FRANCISCO LOS ANGELES PHILADELPHIA CHICAGO OFFICES COAST TO COAST AND OVERSEAS TABELL'S MARKET LETTER January 19, 1962 The irregular downdrift from the November high of 741. 30 in the Dow-Jones In- dustrial average continued during the past week, and a new intra-day low for the move wa reached on Thursday at 690.21. At that level, the Industrials were very close to the Sept ber low of 688.77. From a technical viewpoint, it is interesting to note that our breadthof-the- market index is also close to its September low. In a sense, this is at least nega tively favorable. Since May, the breadth-of-the-market index has acted worse than the market.XThis is a necessary preliminary to better-than-market action by the breadth ind This observation would still be valid if both the Industrial average and the breadth index broke the-Septembe;ro.lows. on our technical work is 650-635, two-thirds to a half of the possible decline has already taken place. From here on the objective should be to watch for signs of a possible chang in trend. During a market decline, relative strength can be of great help in attempting to find the leaders of the next advancing phase of the market. Contrary to general opinion, t e stocks that are usually the leaders of the next advancing phase are the issues that decline the least and not the issues that declined the most. during the preceding downward move. It is possible for a stock to improve its r.elative strength even though it declines in price provided its decline is less than the average The Rail average is an illustration of improving relative strength. While both the Industrial and Utility averages are well below their December lows, the Rail average, at today's close of 148.26, has held above its comparable low of 139.74. In fact, the F ai average is a shade closer to its October high of 153.60 than it is to its December low. Th r is the possibility of a very strong lsmg-term technical question is one of timing. With the exception of a dl dow to The only 'in July, the Rail ave age has held in a comparatively narrow trading ,rou ,139 and 153 for a 1 of 1961. Ability to break out on the upside of this tag are uld be a most construc- tiveiechnicaJ development. The Western a -'s .-patterns for the intermediate uth r ek– ve the more attractive 17'2)7 Canadtan Pacific (253/8), Chicago, Milwauk Northern .acific (42), and b c u ,Chicago & Northwestern (205/8) i /2), are in our recommended list. Woul take advantage IJ1\e\ d to holdings. An exa e relative strength is to be found in the aero-space group. ''ne of the' s 0 recommended list, North American Aviation, reached a new high at 69 1/2 u' the past week, despite the downtrend in the general market. It entered our list 1/2. The oils are also showing good relative strength action and should be bought on minor price declines. Kern County Land (82 1/4), Kerr McGee (43 1/8), Louisiana Land (73 5/8), hillips etroleum (56 5/8) and Royal Dutch (35) are on our recommended list. inother oil issue showing excellent long-term technical action is Gulf Oil (39). 'urchase of this issue is recommended in the 38-35 range. On the speculative side is 'acific Petroleum selling at 15 1/4 on the jl,merican Stock Exchange. It has built up a strong technical pattern and has broken out on the upside of the 13-8 range in which it has held since late 1959. This stock sold at 39 in 1957. The meat packing group has also shown excellent relative strength in the last few weeks. Cur favorite is Swift & Co. (45 1/2). 'I'hishas been a very-disappointing '' issue up until now, but we still believe it is undervalued. Earnings should be higher next year after a disappointing fiscal 1961. Profit margins have been low in the meat packing industry and diversification has been sought. This has taken time. Swift & Co. has been slowly expanding its interest in the insurance business, and it is interesting to note that insurance earnings made up 28 of Swift's 1961 net. As a radical speculation, Internatio Packers (15 1/2) looks interesting. The risk here, of course, is the extremely volatile political situation in South America. Dow-Jones Ind. – 700.72 Dow-Jones Rails – 148.26 EDMUND W. TABELL WALSTON & CO. INC. Thl'l market letter IS not. und under no CIrCumstances is to be construed as, an offer to sell or n solicltatlOn to bu any referred to herdn The mformatlon contained herem IS not gunrnntced as to accuracy or completeness and the furnishIng IS not, and under no cIrcumstances IS to bc construed us, n repre;cnta- t!on by \Valston & Co, Inc All c,,presslons of oplnlon are BubJect to change Without notice 'Valston & Co. Inc. and Officers. Directors. Stockholders and Emilloyee, thereof. purchase. sell and may have an mterest In the I'CCUTltJeI mentioned herem Thll' market letter IS Intended and presented merely as n general 1I1formni commentary on dny to day market news nnJ. not as a complete analYSIS AddItional mformation Ith lcspect to any securities referred to herem WIll furlllshed upon request. .. 301 .