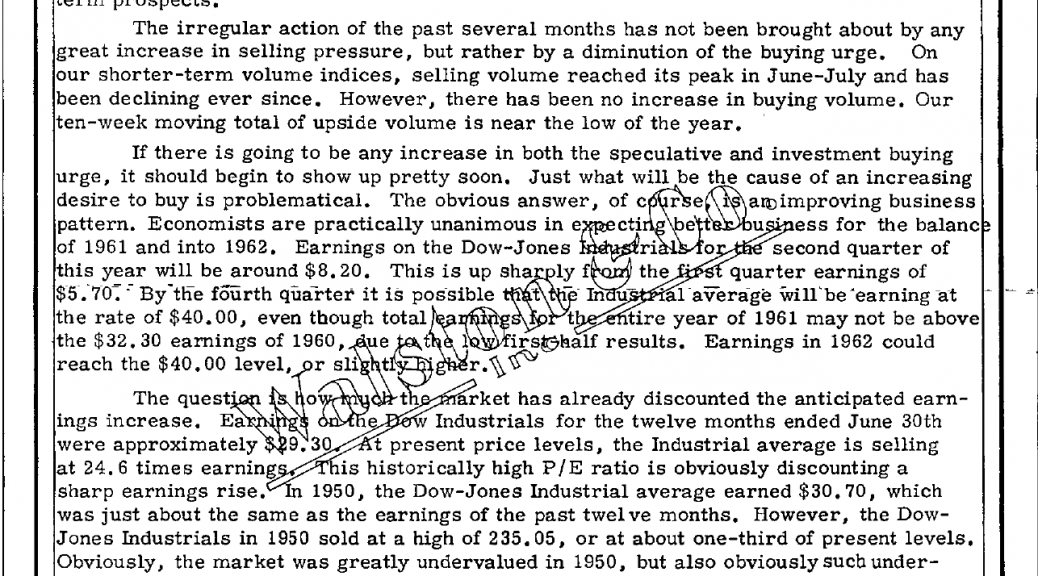 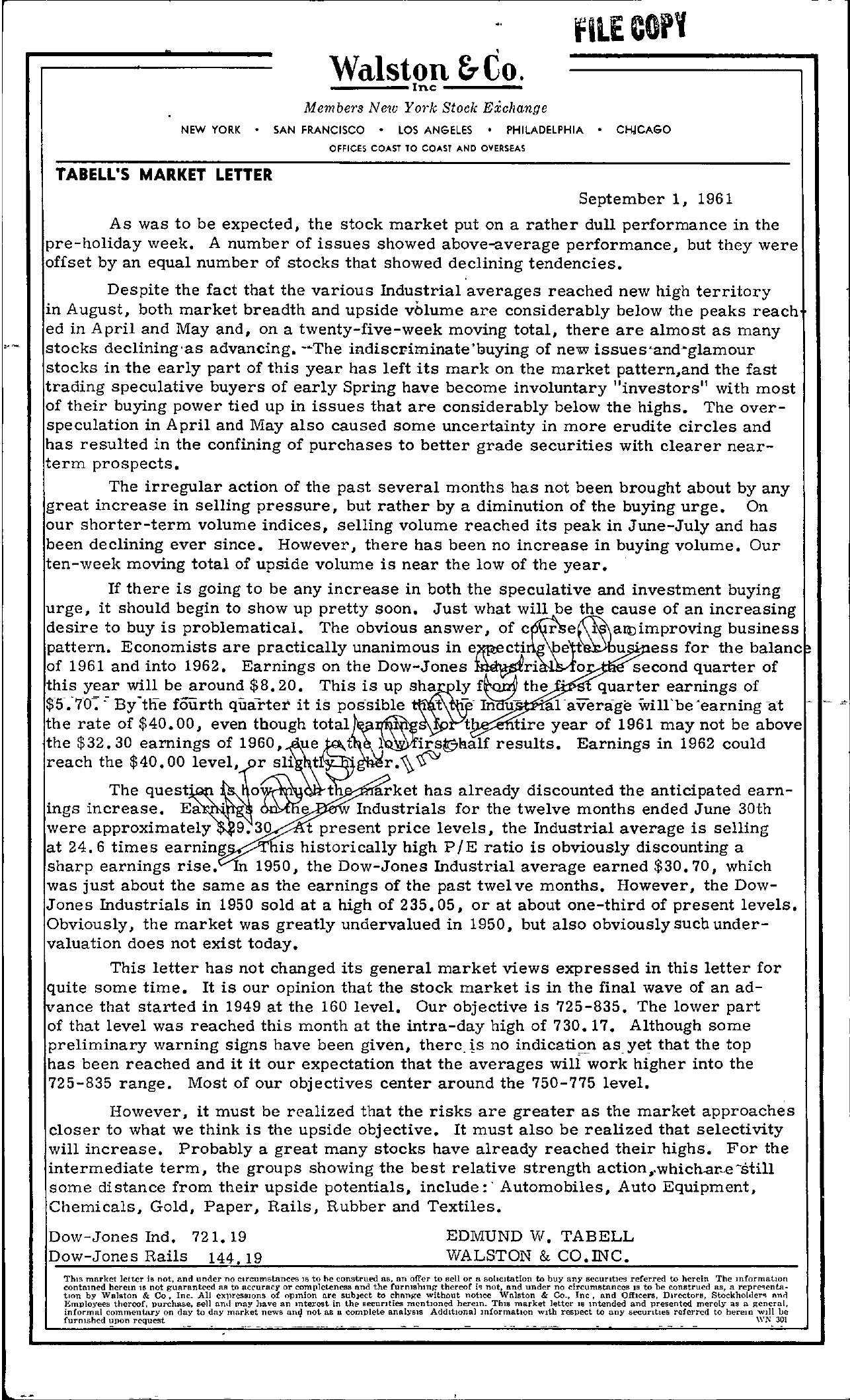 r—————————————————————————— filE COpy Walston &Co. Inc Membe,'s New yo,'k Stock Exchange NEW YORK SAN FRANCISCO LOS ANGELES PHILADELPHIA CH,lCAGO OFFICES COAST TO COAST AND OVERSEAS lABEll'S MARKET lETTER September 1, 1961 As was to be expected, the stock market put on a rather dull performance in the pre-holiday week. A number of issues showed above-average performance, but they were offset by an equal number of stocks that showed declining tendencies. Despite the fact that the various Industrial averages reached new high territory in August, both market breadth and upside volume are considerably below the peaks reach ed in April and May and, on a twenty-five-week moving total, there are almost as many stocks declining'as advancing. -The indiscl'iminate'buying of new stocks in the early part of this year has left its mark on the market pattern,and the fast trading speculative buyers of early Spring have become involuntary investors with most of their buying power tied up in issues that are considerably below the highs. The overspeculation in April and May also caused some uncertainty in more erudite circles and has resulted in the confining of purchases to better grade securities with clearer nearterm prospects. The irregular action of the past several months has not been brought about by any great increase in selling pressure, but rather by a diminution of the buying urge. On our shorter-term volume indices, selling volume reached its peak in June-July and has been de clining ever since. However, there has been no increase in buying volume. Our ten-week moving total of upside volume is near the low of the year. If there is going to be any increase in both the speculative and investment buying urge, it should begin to show up pretty soon. Just what will be the cause of an increasing desire to buy is problematical. The obvious answer, of business pattern. Economists are practically unanimous in e futbu ' ess for the of 1961 and into 1962. Earnings on the Dow-Jones 0 second quarter of this year will be around 8.20. This is up ly the ' quarter earnings of WuT5.70 C By-tne fourth quarter it is pos-sible t – 'aI-average will' be 'earning -at – the rate of 40.00, even though year of 1961 may not be above the 32.30 earnings of results. Earnings in 1962 could reach the r sli t ' r.'i The quest' t arket has already discounted the anticipated earn- ings increase. Ea' Industrials for the twelve months ended June 30th were approximately 9.30 t present price levels, the Industrial average is selling at 24.6 times earning is historically high PIE ratio is obviously discounting a sharp earnings rise. n 1950, the Dow-Jones Industrial average earned 30.70, which was just about the same as the earnings of the past twel ve months. However, the Dow- Jones Industrials in 1950 sold at a high of 235.05, or at about one-third of present levels. Obviously, the market was greatly undervalued in 1950, but also obviously such under- valuation does not exist today. This letter has not changed its general market views expressed in this letter for quite some time. It is our opinion that the stock market is in the final wave of an ad- r-rance that started in 1949 at the 160 level. Our objective is 725-835. The lower part of that level was reached this month at the intra-day high of 730. 17. Although some preliminary warning signs have been given, no indicatin asyet that the top has been reached and it it our expectation that the averages will work higher into the 725-835 range. Most of our objectives center around the 750-775 level. However, it must be realized that the risks are greater as the market approaches closer to what we think is the upside objective. It must also be realized that selectivity will increase. Probably a great many stocks have already reached their highs. For the intermediate term, the groups showing the best relative strength action.,which-ar..e-still some distance from their upside potentials, include' Automobiles, Auto Equipment, Chemicals, Gold, Paper, Rails, Rubber and Textiles. Dow-Jones Ind. 721.19 Dow-Jones Rails 144.19 EDMUND W. TABELL WALSTON & CO.INC. This market letter is not, and under no Circumstances lS to he construal DS, an offer to sell or a sotlcltation to buy any seCUrities referred to herein The mformabon contnmed herem IS not guaranteed IlR to nc'uracy or completeness and the furntshmg thereof not. and under no circumstnnccs 19 to be construed as, a repre!ent..a- tlon by Walston & Co. Inc All (X1)rCSSlOns of opmion nre subJect to clmnge without notlc(! Wnlston & Coo, Inc, and OffIcers, Directors, Stockholtlero; nnn lmployees thereof, purchase, sell an,l may have an mterest in the securIties mentioned herem ThlS market letter IS lntcnded and presented merely as a general, informal commentary on day to day market news ani not as a complete analysls Additional mformatton WIth respect to any secunttes reicrr'(!d to herem wIll be furrushed request WN 31