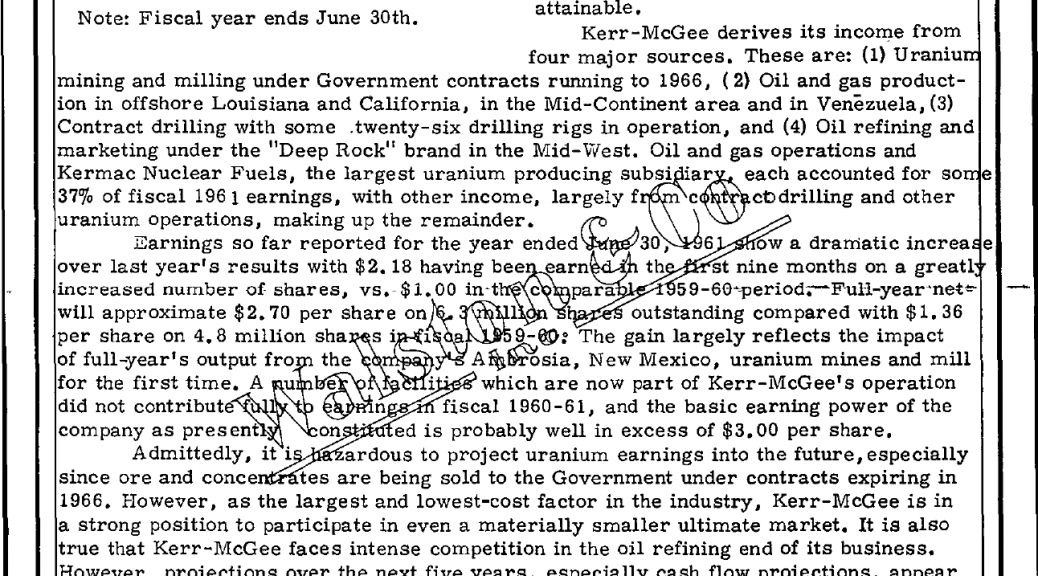 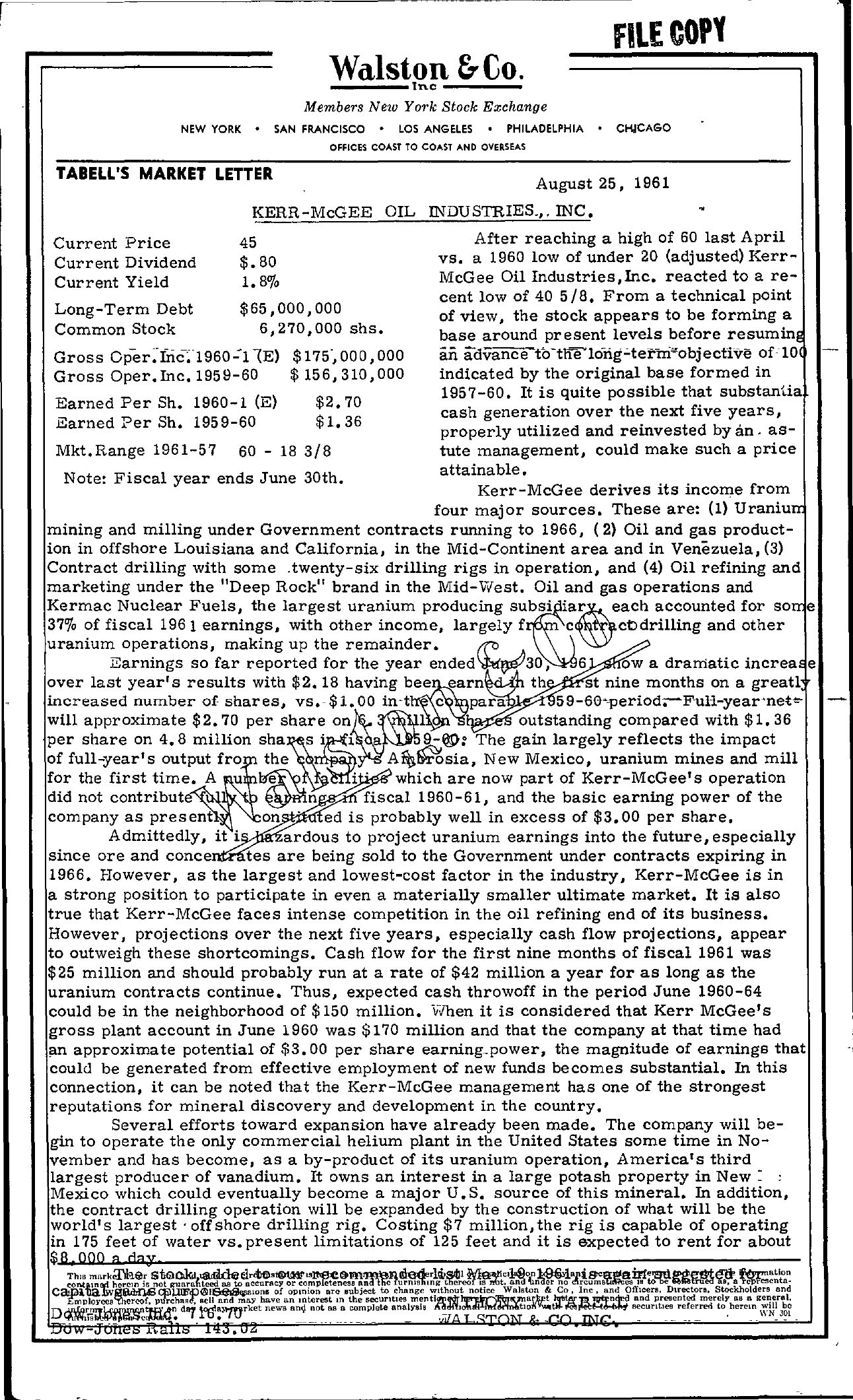 Walston &Co. lnc FILE COpy Members New York Stock Exchange NEW YORK SAN FRANCISCO LOS ANGELES PHILADELPHIA CI-\ICAGO OFFICES COAST TO COAST AND OVERSEAS TABEll'S MARKET lETTER August 25, 1961 KERR-McGEE OIL nmuSTRIES.,. INC. Current Price Current Dividend Current Yield 45 .80 1. 8/0 Long-Term Debt Common Stock 65,000,000 6,270,000 shs. Gross Op-erlnc1960'1-(E) 175-,000,000 After reaching a high of 60 last April vs. a 1960 low of under 20 (adjusted) KerrMcGee Oil Industries, Inc. reacted to a recent low of 405/8. From a technical point of view, the stock appears to be forming a base around present levels before resumin an aavance tb-tl1elcirig..termobjective of-10 Gross Oper.Inc.1959-60 156,310,000 Earned Per Sh. 1960-1 (E) Earned Per Sh. 1959-60 2.70 1.36 indicated by the original base formed in 1957-60. It is quite possible that substantia cash generation over the next five years, properly utilized and reinvested by an. as- Mkt. Range 1961-57 60 – 18 3/8 tute management, could make such a price Note Fiscal year ends June 30th. attainable. Kerr-McGee derives its income from four major sources. These are (1) Uraniu mining and milling under Government contracts running to 1966, (2) Oil and gas product- ion in offshore Louisiana and California, in the Mid-Continent area and in Venezuela, (3) Contract drilling with some twenty-six drilling rigs in operation, and (4) Oil refining and marketing under the Deep Rock brand in the Mid-ItVest. Oil and gas operations and Kermac Nuclear Fuels, the largest uranium producing accounted for so e 37 of fiscal 1961 earnings, with other income, largely f c ctldrilling and other uranium operations, making up the remainder. ((0 Earnings so far reported for the year 6 ow a dramatic increa e over last year's results with 2.18 having earn th st nine months on a greatl increased number of shares, vs.- 1. 00 in-t c para will approximate 2.70 per share on I outstanding compared with 1. 36 per share on 4.8 million sha s i l a The gain largely reflects the impact for the first time. A u i' which are now part of Kerr-McGee's operation did not contribute fiscal 1960-61, and the basic earning power of the company as present on' ed is probably well in excess of 3.00 per share. Admittedly, it i ardous to project uranium earnings into the future, especially since ore and conce tes are being sold to the Government under contracts expiring in 1966. However, as the largest and lowest-cost factor in the industry, Kerr-McGee is in a strong position to participate in even a materially smaller ultimate market. It is also true that Kerr-McGee faces intense competition in the oil refining end of its business. However, projections over the next five years, especially cash flow projections, appear to outweigh these Shortcomings. Cash flow for the first nine months of fiscal 1961 was 25 million and should probably run at a rate of 42 million a year for as long as the uranium contracts continue. Thus, expected cash throwoff in the period June 1960-64 could be in the neighborhood of 150 million. ,,\Then it is considered that Kerr McGee's gross plant account in June 1960 was 170 million and that the company at that time had an approximate potential of 3.00 per share earningpower, the magnitude of earnings that could be generated from effective employment of new funds becomes substantial. In this connection, it can be noted that the Kerr-McGee management has one of the strongest reputations for mineral discovery and development in the country. Several efforts toward expansion have already been made. The company will begin to operate the only commercial helium plant in the United States some time in No- vember and has become, as a by-product of its uranium operation, America's third largest producer of vanadium. It owns an interest in a large potash property in New Mexico which could eventually become a major U. S. source of this mineral. In addition, the contract drilling operation will be expanded by the construction of what will be the world's largest offshore drilling rig. Costing 7 million, the rig is capable of operating in 175 feet of water vs. present limitations of 125 feet and it is expected to rent for about 8,000 a day Th mkaihe, st6lokl cont!!!Iti herClll is not gunratteed as to accuracy or completeness tt;erooIlI1/tI'on;bi..aMnaloon\tJ..rnuaiel,r,n1ois-c'..a m 19 . , . . , , ……! t a -..tlon reptescnta- Catlill UiI..IW'ft'UliliIlS of opinion arc subject to change Without notice Walswn & Co, Inc, and Officers, Directors, Stockholders and Employccs'Thcrrof, pttrchast!', sell and may have an tnterest m the securities hrtrtArn and presented merely as a general. ne securities referred to herem