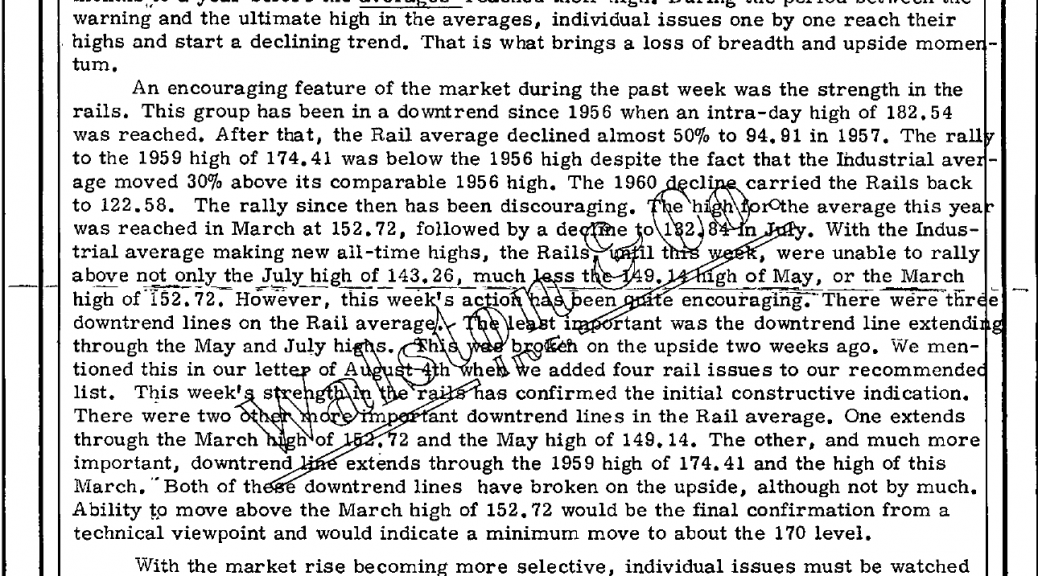 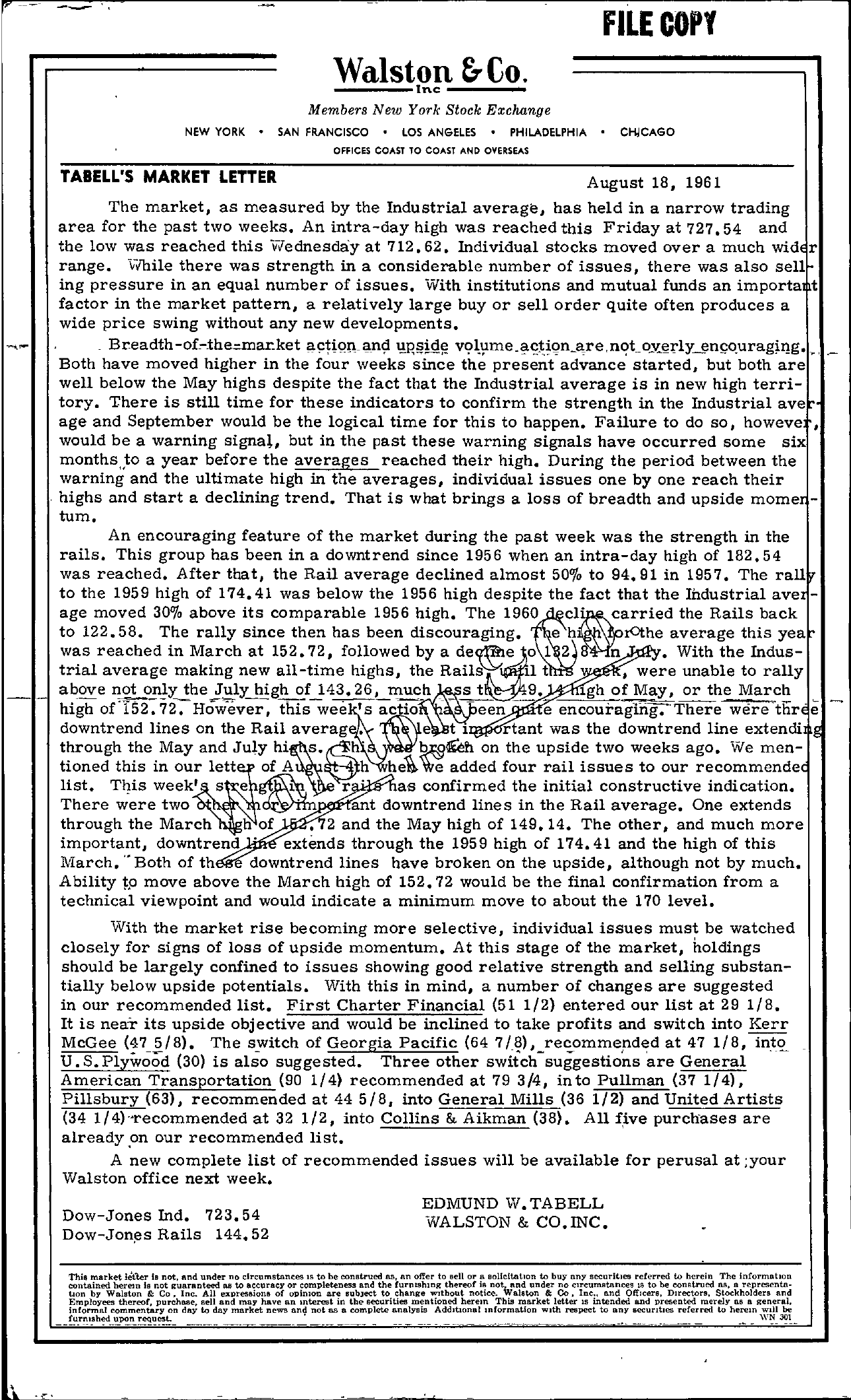 FILE COpy Walston &Co. ———Inc——— Members New York Stock Exchange NEW YORK SAN FRANCISCO LOS ANGELES PHILADELPHIA CHJCAGO OFFICES COAST TO COAST AND OVERSEAS TABELL'S MARKET LETTER August 18, 1961 The market, as measured by the Industrial average, has held in a narrow trading area for the past two weeks. An intra-day high was reached this Friday at 727.54 and the low was reached this Yrednesday at 712.62. Individual stocks moved over a much wid r range. liilhile there was strength in a considerable number of issues, there was also sell ing pressure in an equal number of issues. With institutions and mutual funds an importa t factor in the market pattern, a relatively large buy or sell order quite often produces a wide price swing without any new developments. . Breadth-of-themarket n9t , Both have moved higher in the four weeks since the present advance started, but both are well below the May highs despite the fact that the Industrial average is in new high terri- tory. There is still time for these indicators to confirm the strength in the Industrial ave age and September would be the logical time for this to happen. Failure to do so, howeve , would be a warning signal, but in the past these warning signals have occurred some six monthso a year before the averages reached their high. During the period between the warning and the ultimate high in the averages, individual issues one by one reach their , highs and start a declining trend. That is what brings a loss of breadth and upside mome – tum. An encouraging feature of the market during the past week was the strength in the rails. This group has been in a downtrend since 1956 when an intra-day high of 182.54 was reached. After that, the Rail average declined almost 50 to 94.91 in 1957. The raIl to the 1959 high of 174.41 was below the 1956 high despite the fact that the Industrial ave – age moved 30 above its comparable 1956 high. The carried the Rails back to 122.58. The rally since then has been discouraging. e h Ahe average this yea was reached in March at 152.72, followed by a 1 2 n With the Indus- trial average making newall-time highs, the Rails 11 t , were unable to rally above not only the JulY' high of 143.26, t 9. 19h of May, or the March ehigh of '152. 72– However , this-wee 's ac io' '. – – een – e encouraging. There were 'tnr ' downtrend lines on the Rail averag e t 1 rtant was the downtrend line extendi through the May and July hi s. h' b on the upside two weeks ago. We men- list. week' s r' as confirmed the initial constructive indication. There were two ant downtrend lines in the Rail average. One extends through the March Ii of 2 and the May high of 149.14. The other, and much more important, downtrend' extends through the 1959 high of 174.41 and the high of this March… Both of th downtrend lines have broken on the upside, although not by much. Ability tp move above the March high of 152.72 would be the final confirmation from a technical viewpoint and would indicate a minimum move to about the 170 level. With the market rise becoming more selective, individual issues must be watched closely for signs of loss of upside momentum. At this stage of the market, holdings should be largely confined to issues showing good relative strength and selling substan- tially below upside potentials. With this in mind, a number of changes are suggested in our recommended list. First Charter Financial (51 1/2) entered our list at 29 1/8. It is neaT its upside objective and would be inclined to take profits and switch into Kerr McGee The sY'itch of Georgia Pacific (64 at 471/8, intC2.. U. S. Plywood (30) is also suggested. Three other switch suggestions are General American Transportation (90 1/4) recommended at 79 3/4, into Pullman (37 1/4), Pillsbury (63), recommended at 44 5/8, into General Mills (36 1/2) and United Artists (34 1/4) 'recommended at 32 1/2, into Collins & Aikman (38). All five purchases are already.on our recommended list. A new complete list of recommended issues will be available for perusal at ;your Walston office next week. Dow-Jones Ind. 723.54 Rails 144.52 EDMUND W.TABELL WALSTON & CO. INC. This market letter in not, and under no circumstances IS to be construed 11.5, an offer to sell or 11 solieitatlOn to buy any securities referred w herein The information contained herem Is not guaranteed as to accuracy or completeness and the furnIShing thereof is not. and under no CIrcumstances 1.8 to be eonstrued aa, II. representa- Uon by Walston & Co. Inc. All expressions of oplmon are subJect to change WIthout notice. Walston & Co, Inc., and OffIcers, DIrectors, Stockholders and Employees thereof, purehaae, sell and may have an mterest in the securities mentioned herem This market letter IS intended and presented merely as a general, informal commentary on day to day market news and not as a complete analysis AddItional Information With respect to any securities referred to herem Will be . WN 301