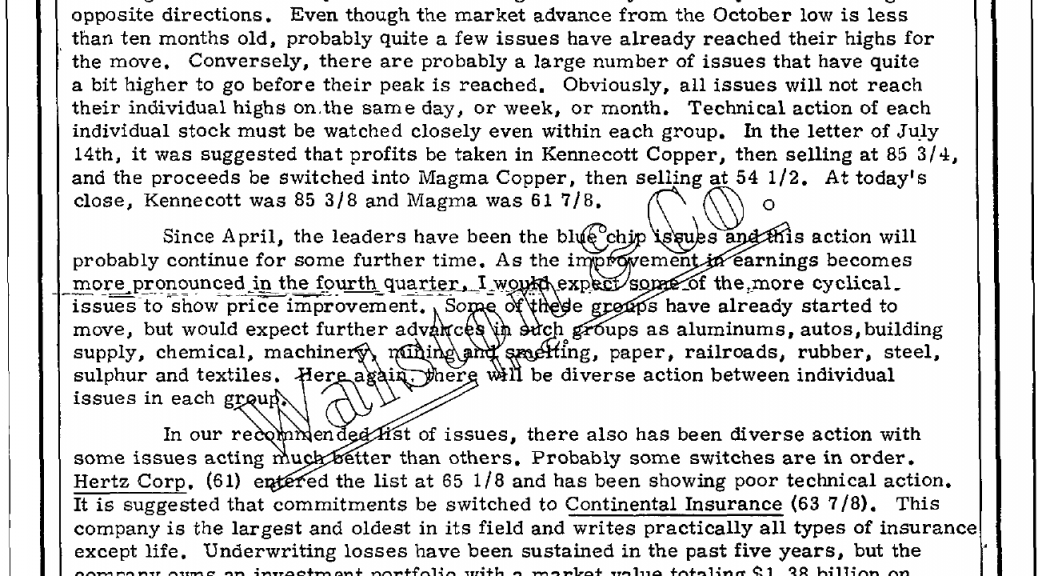 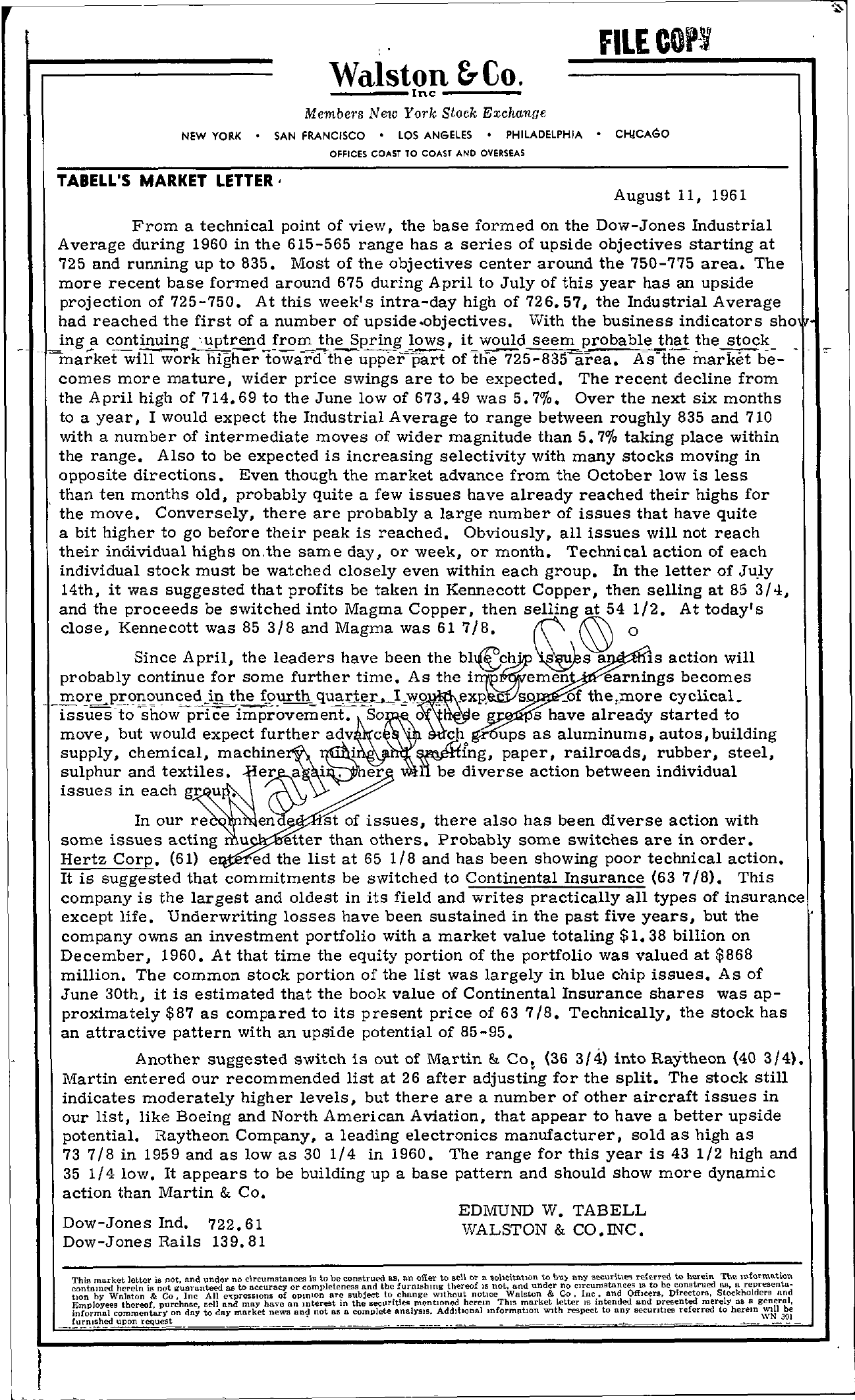 FILE COP Walston &reo. Inc Members Ne1v York Stock Exchange NEW YORK SAN FRANCISCO LOS ANGELES PHILADELPHIA CHICAGO OFFICES COAST TO COAST AND OVERSEAS TABEll'S MARKET lETTER, August l1, 1961 From a technical point of view, the base formed on the Dow-Jones Industrial Average during 1960 in the 615-565 range has a series of upside objectives starting at 725 and running up to 835. Most of the objectives center around the 750-775 area. The more recent base formed around 675 during April to July of this year has an upside projection of 725-750. At this week's intra-day high of 726.57, the Industrial Average had reached the first of a number of upside.objectives. vVith the business indicators sho — —– — – ing a continuing ',uptrend from the Spring lows, it would seem probable that the stock -m-arket will work nigher towar-dthe upper part oftne 725-835 area. As-the m- arket be- – comes more mature, wider price swings are to be expected. The recent decline from the A pril high of 714.69 to the June low of 673.49 was 5.70/0. Over the next six months to a year, I would expect the Industrial Average to range between roughly 835 and 710 with a number of intermediate moves of wider magnitude than 5.70/0 taking place within the range. Also to be expected is increasing selectivity with many stocks moving in opposite directions. Even though the market advance from the October low is less than ten months old, probably quite a few issues have already reached their highs for the move. Conversely, there are probably a large number of issues that have quite a bit higher to go before their peak is reached. Obviously, all issues will not reach their individual highs on,the same day, or week, or month. Technical action of each individual stock must be watched closely even within each group. In the letter of July 14th, it was suggested that profits be taken in Kennecott Copper, then selling at 85 3/4, and the proceeds be switched into Magma Copper, then selling at 54 1/2. At today's close, Kennecott was 853/8 and Magma was 61 7/8. 0 Since April, the leaders have been the action will probably continue for some further time. As the i emen . earnings becomes more issues to show price improvement. move, but would expect further adv c c. themore cyclicaL 0e s have already started to . c ogr'6;;ps as aluminums, autos, building supply, chemical, machine i ing, paper, railroads, rubber, steel, issues in each In our re l\ en 'st of issues, there also has been diverse action with some issues acting Hertz Corp. (61) than others. Probably some switches are in order. the list at 65 1/8 and has been showing poor technical action. It is suggested that commitments be switched to Continental Insurance (63 7/8). This company is the largest and oldest in its field and writes practically all types of insurance except life. Underwriting losses have been sustained in the past five years, but the . company owns an investment portfolio with a market value totaling 1.38 billion on December, 1960. At that time the equity portion of the portfolio was valued at 868 million. The common stock portion of the list was largely in blue chip issues. As of June 30th, it is estimated that the book value of Continental Insurance shares was approximately 87 as compared to its present price of 63 7/8. Technically, the stock has an attractive pattern with an upside potential of 85-95. Another suggested switch is out of Martin & Co! (363/4) into Raytheon (403/4). Martin entered our recommended list at 26 after adjusting for the split. The stock still indicates moderately higher levels, but there are a number of other aircraft issues in our list, like Boeing and North American Aviation, that appear to have a better upside potential. Raytheon Company, a leading electronics manufacturer, sold as high as 73 7/8 in 1959 and as low as 30 1/4 in 1960. The range for this year is 431/2 high and 35 1/4 low. It appears to be building up a base pattern and should show more dynamic action than Martin & Co. Dow-Jones Ind. 722.61 Dow-Jones Rails 139.81 EDMUND W. TAB ELL WALSTON & CO. INC. This market letter is not, nnd under no circumstances is to be construed as, an offer to Ben or a Bohcitntlon to bu) any refcTl'ed to herein The 1n.formll.tiou contamed herein is not guaranteed as to accuracy or completeness a.nd the furnIshmg thereof IS not, nnd under no CIrcumstances IS to be construed a.s, II. representll.- tlOn by V,'alston & Co Inc All e'lpresslOns of opmlon are subject to change WIthout notice Walston & Co, Inc, and OffIcers, Directors, Stockholders Ilnd Employees thereof sell and may have an Interest in the securities mentiOned herem ThiS market letter IS intended and presented merely as a general, commenWl on day to day market news not as a complete analYSIS. Additional mformatlOn With respect to any securities referred to herem upon request . ..