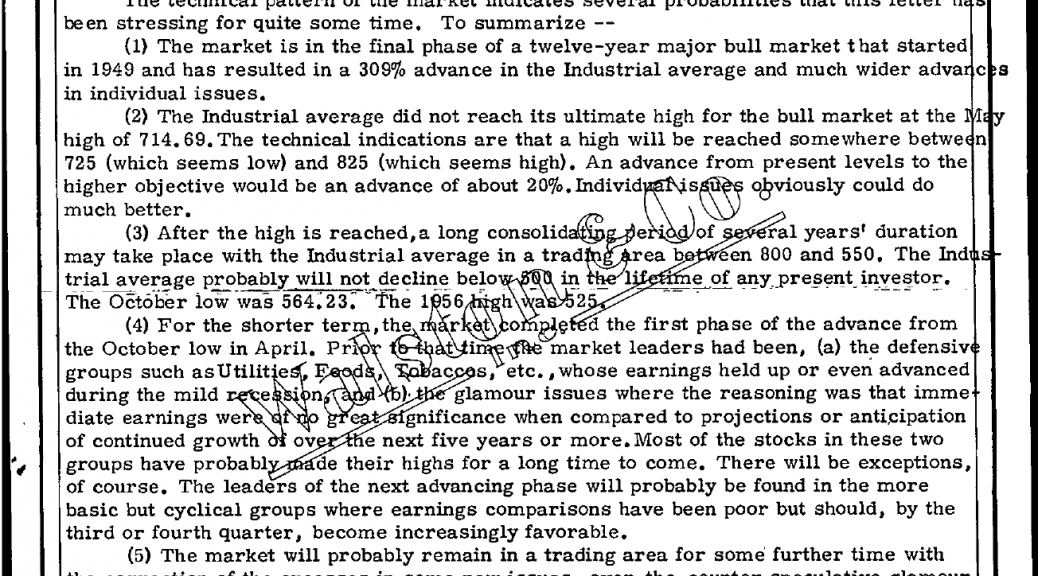 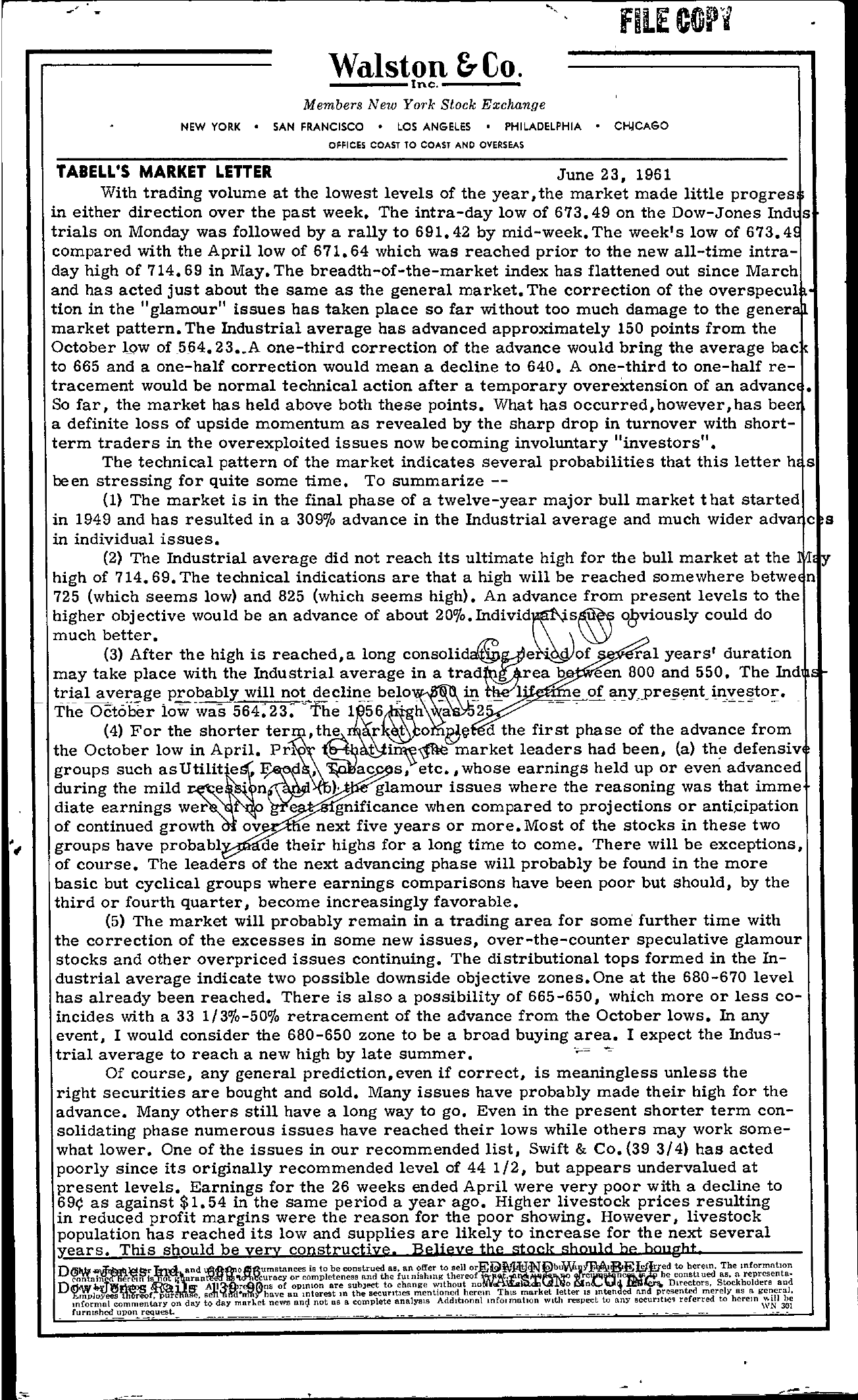 Walston &Co. – – – – I n c , ;,…..;……,;….;… Members New York Stock Exchange NEW YORK SAN FRANCISCO LOS ANGELES PHILADELPHIA CHlCAGO OFFICES COAST TO COAST AND OVERSEAS TABELL'S MARKET LETTER June 23, 1961 With trading volume at the lowest levels of the year, the market made little progres in either direction over the past week. The intra-day low of 673.49 on the Dow-Jones Ind s trials on Monday was followed by a rally to 691.42 by mid-week. The week's low of 673.4 compared with the April low of 671.64 which was reached prior to the newall-time intra- day high of 714.69 in May. The breadth-of-the-market index has flattened out since March and has acted just about the same as the general market. The correction of the overspecul tion in the glamour issues has taken place so far without too much damage to the gener market pattern. The Industrial average has advanced approximately 150 points from the October 19w of 5p4. 23 . A one-third correction of the advance would bring the average bac to 665 and a one-half correction would mean a decline to 640. A one-third to one-half re- tracement would be normal technical action after a temporary overeXtension of an advanc So far, the market has held above both these points. What has occurred,however,has bee a definite loss of upside momentum as revealed by the sharp drop in turnover with short- term traders in the overexploited issues now becoming involuntary investors. The technical pattern of the market indicates several probabilities that this letter h s been stressing for quite some time. To summarize — (I) The market is in the final phase of a twelve-year major bull market t hat started in 1949 and has resulted in a 309/0 advance in the Industrial average and much wider adva c s in individual issues. (2) The Industrial average did not reach its ultimate high for the bull market at the y high of 714.69. The technical indications are that a high will be reached somewhere betwe n 725 (which seems low) and 825 (which seems high). An advance from present levels to the higher objective would be an advance of about much better. 08viously could do W (3) After the high is reached,a long of ral years' duration ;&1may take place with the Industrial average in a been 800 and 550. The Ind of anYpreent. – (4) For the shorter term, d the first phase of the advance from the October low in April. t market leaders had been, (a) defensiv groups such asUtilit'e ac s, etc. ,whose earnings held up or even advanced during the mild e' n ), glamour issues where the reasoning was that imme diate earnings wer e gnificance when compared to projections or anti,cipation of continued growth ov e next five years or more. Most of the stocks in these two t groups have probabl de their highs for a long time to come. There will be exceptions, of course. The leaders of the next advancing phase will probably be found in the more basic but cyclical groups where earnings comparisons have been poor but should, by the third or fourth quarter, become increasingly favorable. (5) The market will probably remain in a trading area for some further time with the correction of the excesses in some new issues, over-the-counter speculative glamour stocks and other overpriced issues continuing. The distributional tops formed in the In- dustrial average indicate two possible downside objective zones. One at the 680-670 level has already been reached. There is also a possibility of 665 -650, which more or less co- incides with a 33 1/3/0-50/0 retracement of the advance from the October lows. In any event, I would consider the 680-650 zone to be a broad buying area. I expect the Indus- trial average to reach a new high by late summer. – Of course, any general prediction, even if correct, is meaningless unless the right securities are bought and sold. Many issues have probably made their high for the advance. Many others still have a long way to go. Even in the present shorter term con- solidating phase numerous issues have reached their lows while others may work some- what lower. One of the issues in our recommended list, Swift & Co. (39 3/4) has acted poorly since its originally recommended level of 44 1/2, but appears undervalued at present levels. Earnings for the 26 weeks ended April were very poor with a decline to 69 as against 1.54 in the same period a year ago. Higher livestock prices resulting in reduced profit margins were the reason for the poor showing. However, livestock population has reached its low and supplies are likely to increase for the next several years. This should be very constructive. Belieye the stock sbould he hought offerand is to be construed as, an to sell to herem. The anformatlon Dm('onwtain ermn bk'lh'nl!'curacy or completeness fUld the fUlnishmg thereof of opinIOn are subject to chnnge Without noNVat1..ua rctpli be consttued as, n reprcscnta- 0 n&.,. rJ. DmiJ Directors, Stockholders and bmployeesilicroof, purcnase, nn mterest III the securities mentioned herem ThiS market letter IS Intended nnd presented merely as a mformnl commentary on day to day market news amJ. not lIoB a complete analYl!1S Additional mfol mahon With respect to nny BccurltlC'J referred to herem – – – — – — ,— –