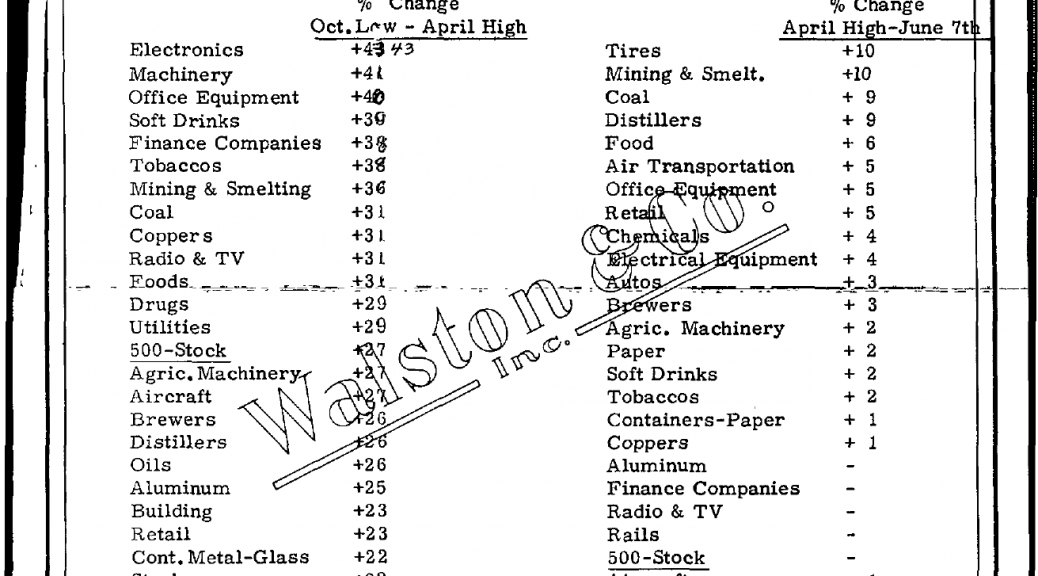 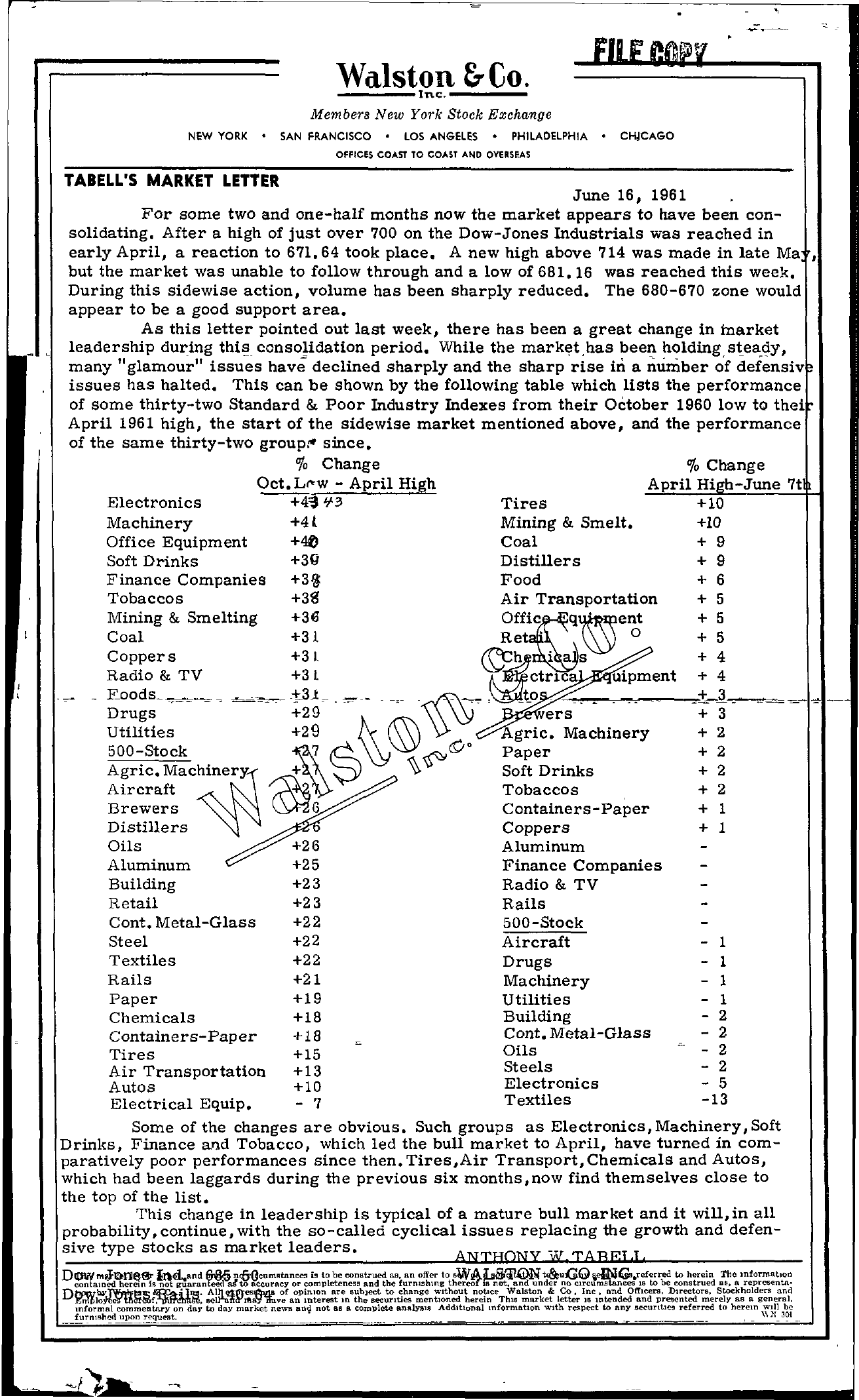 Walston &- Co. ———Inc.——— Member8 New York Stock Exchange NEW YORK SAN FRANCISCO LOS ANGELES PHILADELPHIA CH,iCAGO OFFICes COAST TO COAST AND OVERSEAS TABELL'S MARKET LETTER June 16, 1961 For some two and one-half months now the market appears to have been con- solidating. After a high of just over 700 on the Dow-Jones Industrials was reached in early April, a reaction to 671.64 took place. A new high above 714 was made in late but the market was unable to follow through and a low of 681. 16 was reached this week. During this sidewise action, volume has been sharply reduced. The 680-670 zone would appear to be a good support area. As this letter pointed out last week, there has been a great change in market leadership during thifj consolidation period. While the market.has been holdingstea.dy, many glamour issues have declined sharply and the sharp rise in a number of u.,,;;, issues has halted. This can be shown by the following table which lists the performance of some thirty-two Standard & Poor Industry Indexes from their October 1960 low to April 1961 high, the start of the sidewise market mentioned above, and the performance of the same thirty-two group,. since. /0 Change Oct. Lt'w – April High Electronics 4;J'f3 Machinery Office Equipment 4l 4f) Soft Drinks 30 Finance Companies 3 Tobaccos 31'1 Mining & Smelting 36 Coal 31 Coppers Radio & TV 3l 3 1 Tires Mining & Smelt. Coal Distillers Food Air Transportation WRet 0 i as ctrlca uipment 10 10 9 9 6 5 5 5 4 4 – . — 3 500-Stock Aric. AIrcraft Vc& Brewers G Distillers Oils 26 Aluminum 25 Building 23 Retail 23 Cont. Metal-Glass 22 Steel 22 Textiles 22 Rails 21 Paper 19 Chemicals 18 Containers-Paper 18 Tires Air Transportation Autos Electrical Equip. 15 13 10 -7 Tobaccos Containers-Paper Coppers Aluminum Finance Companies Radio & TV Rails 500-Stock Aircraft Drugs Machinery Utilities Building Cont. Metal-Glass Oils Steels Electronics Textiles 2 2 2 2 1 1 -1 -1 -1 -1 -2 -2 2 -2 -5 -13 Some of the changes are obvious. Such groups as Electronics, Machinery, Soft Drinks, Finance a'ld Tobacco, which led the bull market to April, have turned in com- paratively poor performances since then. Tires,Air Transport, Chemicals and Autos, which had been laggards during the previous six months, now find themselves close to the top of the list. This change in leadership is typical of a mature bull market and it will, in all probability, continue, with the so-called cyclical issues replacing the growth and defen- sive type stocks as market leaders. ANTHONY W TABEI.I, aW u&uGQor coi9mptolebteenceosnssatrnudedthaeBofunrnnIoSfhfeinr gtotherroJl1'lI; not, and under no CIrc,uemUst)alnGce.rse1f8etrorebde ctoonhsetrrueiend DTBh,e.amrefoprrcmsaetnltonn opinIon are to change WIthout notice Walston & Co, Inc, and Officers, Directors, Stockholders and an mterest In the securIties mentioned herein ThlS ma.rket letter IS Intended and prCl!l!nted merely as a genernl. an9 not as a complete analYSIS Addlttonal Information With respect to any secuntlC9 referred to herem