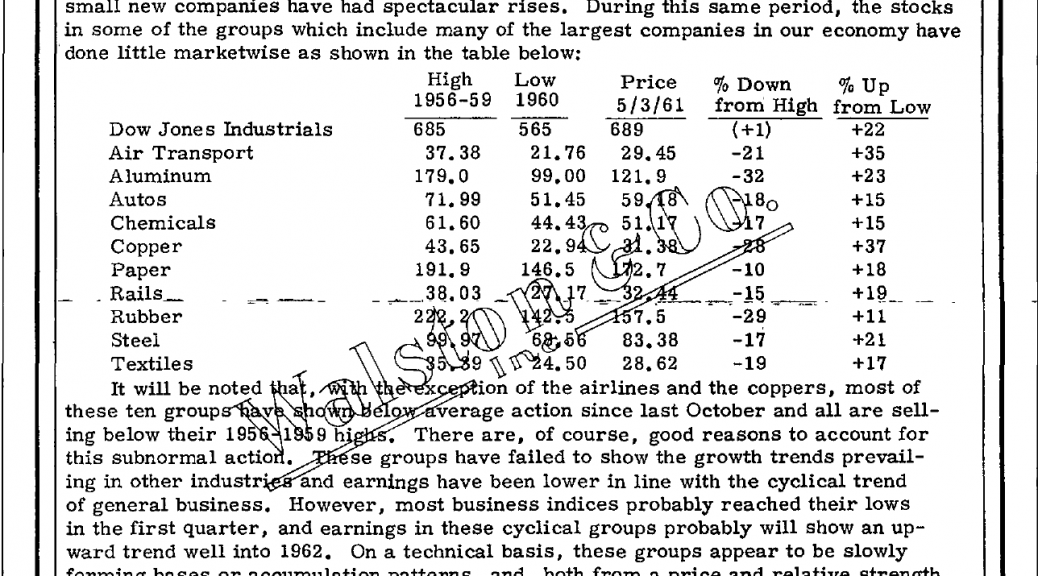 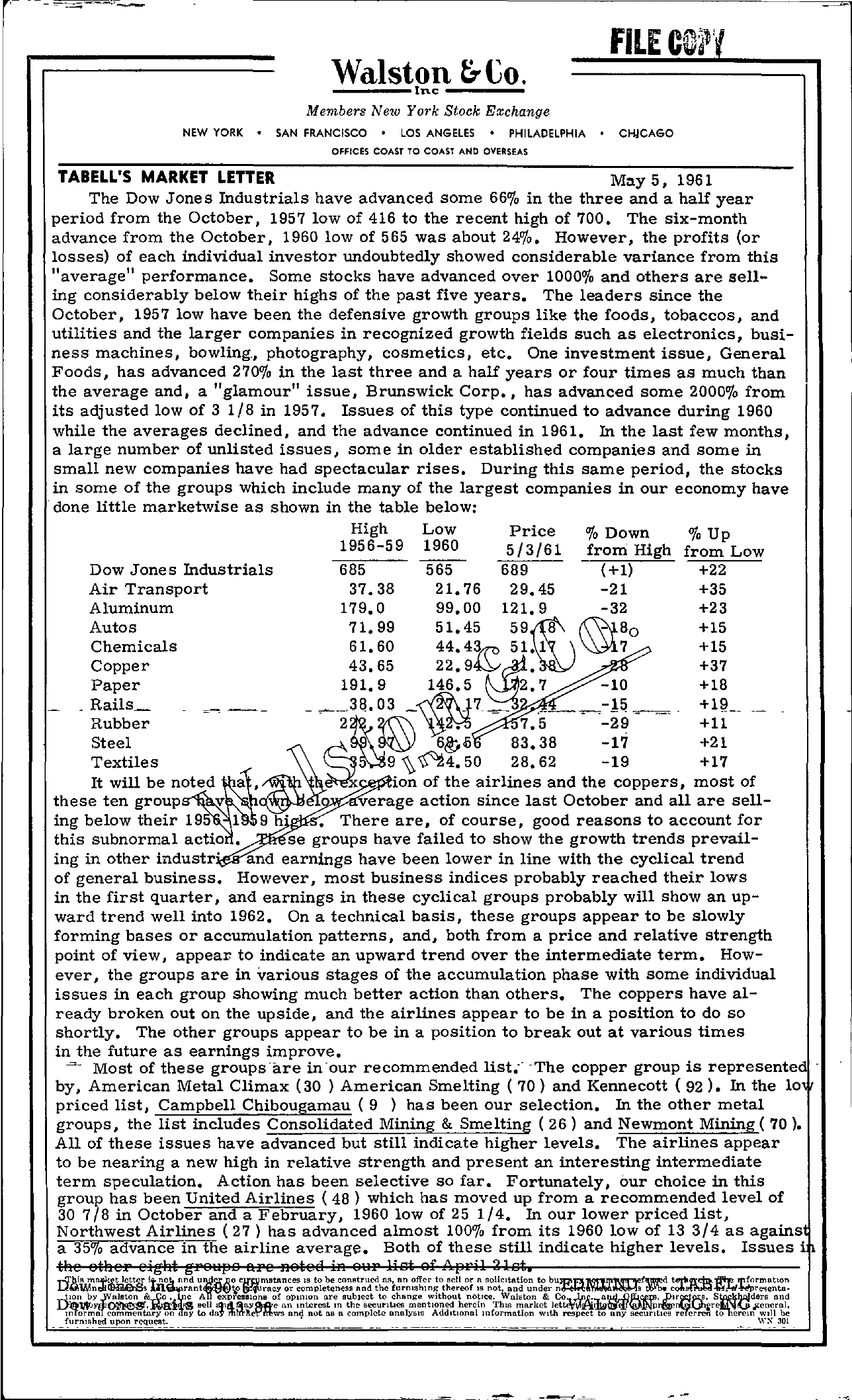 W—-a–l-s-Itnocn—&–C–o–. Members New YOI-k Stock Exchange NEW YORK SAN FRANCISCO LOS ANGELES PHILADELPHIA OFFICES COAST TO COAST AND OVERSEAS FILE CHJCAGO TABELL'S MARKET LETTER Mo.y 5, 1961 The Dow Jones Industrials have advanced some 66 in the three and a half year period from the October, 1957 low of 416 to the recent high of 700. The six-month advance from the October, 1960 low of 565 was about 240/0. However, the profits (or losses) of each individual investor undoubtedly showed considerable variance from this average performance. Some stocks have advanced over 1000 and others are sell- ing considerably below their highs of the past five years. The leaders since the October, 1957 low have been the defensive growth groups like the foods, tobaccos, and utilities and the larger companies in recognized growth fields such as electronics, busi- ness machines, bowling., photography, cosmetics, etc. One investment issue, General Foods, has advanced 2700/0 in the last three and a half years or four times as much than the average and, a glamour issue, Brunswick Corp., has advanced some 20000/0 from its adjusted low of 31/8 in 1957. Issues of this type continued to advance during 1960 while the averages declined, and the advance continued in 1961. In the last few months, a large number of unlisted issues, some in older established companies and some in small new companies have had spectacular rises. During this same period, the stocks in some of the groups which include many of the largest companies in our economy have ,done little marketwise as shown in the table below High Low 1956-59 1960 Price Down Up 5/3/61 from High from Low Dow Jones Industrials Air Transport Aluminum 685 37.38 179.0 565 689 21.76 29.45 99.00 121.9 (1) -21 -32 22 35 23 Autos Chemicals Copper Paper Rails 71.99 61.60 43.65 191.9 ,36.03 51.45 22. 146.5 59rui\W8Q 51.1 -10 .—- 15 15 37 18 19 6is Textiles 50 28.62 -19 17 It will be noted ion of the airlines and the coppers, most of these ten group v verage action since last October and all are sell- ing below their 195 9 h- There are, of course, good reasons to account for this subnormal actio se groups have failed to show the growth trends prevail- ing in other industr- and earnings have been lower in line with the cyclical trend of general business. However, most business indices probably reached their lows in the first quarter, and earnings in these cyclical groups probably will show an up- ward trend well into 1962. On a technical basiS, these groups appear to be slowly forming bases or accumulation patterns, and, both from a price and relative strength point of view, appear to indicate an upward trend over the intermediate term. How- ever, the groups are in various stages of the accumulation phase with some individual issues in each group showing much better action than others. The coppers have al- ready broken out on the upside, and the airlines appear to be in a position to do so shortly. The other groups appear to be in a position to break out at various times in the future as earnings improve. Most of these groups are in our recommended list.- -The copper group is represented by, American Metal Climax (30 ) American Smelting ( 70) and Kennecott ( 92 ). In the 10 priced list, Campbell Chibougamau (9 ) has been our selection. In the other metal groups, the list includes Consolidated Mining & Smelting ( 26) and Newmont Mining (70). All of these issues have advanced but still indicate higher levels. The airlines appear to be nearing a new high in relative strength and present an interesting intermediate term speculation. Action has been selective so far. Fortunately, our choice in this group has been United Airlines (48 ) which has moved up from a recommended level of 307/8 in October and a February, 1960 low of 25 1/4. In our lower priced list, Northwest Airlines (27) has advanced almost 100 from its 1960 low of 13 3/4 as agains a 35 advance in the airline average. Both of these still indicate higher levels. Issues i the eigat itn rant ape Heisel ifi 9tiP 14st sf l.ef)pil 21st. IS to be cctnstrued as, tm offer to sell or n soliCitation ro tp lJ!fUrncy or completeness and the furmshlllg thereof IS not, and under wPt9'tcm. I'fl1e JflformutIon t'bVb. DtlOn &…o'l. c A exPreSSIOnB of opWlon are subJect to change without nollce. Walston & C'tnA''.lll)JJOtit.Gf;a, and sell4tlltiln)'QlQre an mterest III the BCCUflbes mentIOned herein ThiS market O,Jteneral, m'forma commentary on ny to daf mM!'e't'Mws and not as a complete analYSIS Additional mformation With respect to any SCCUribell re crrcii to erem Will be upon .. …. . . . . W'. . L –