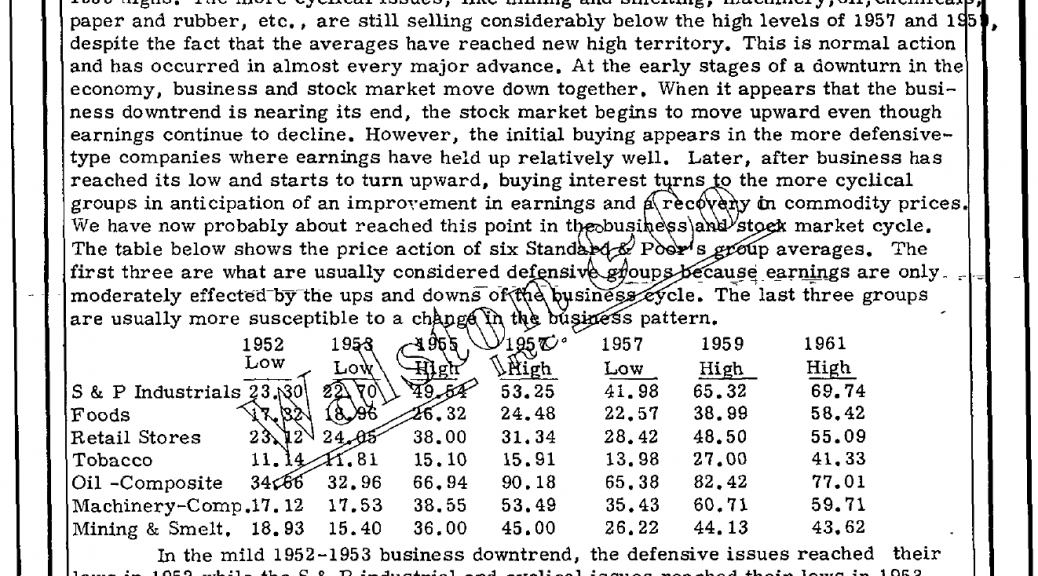 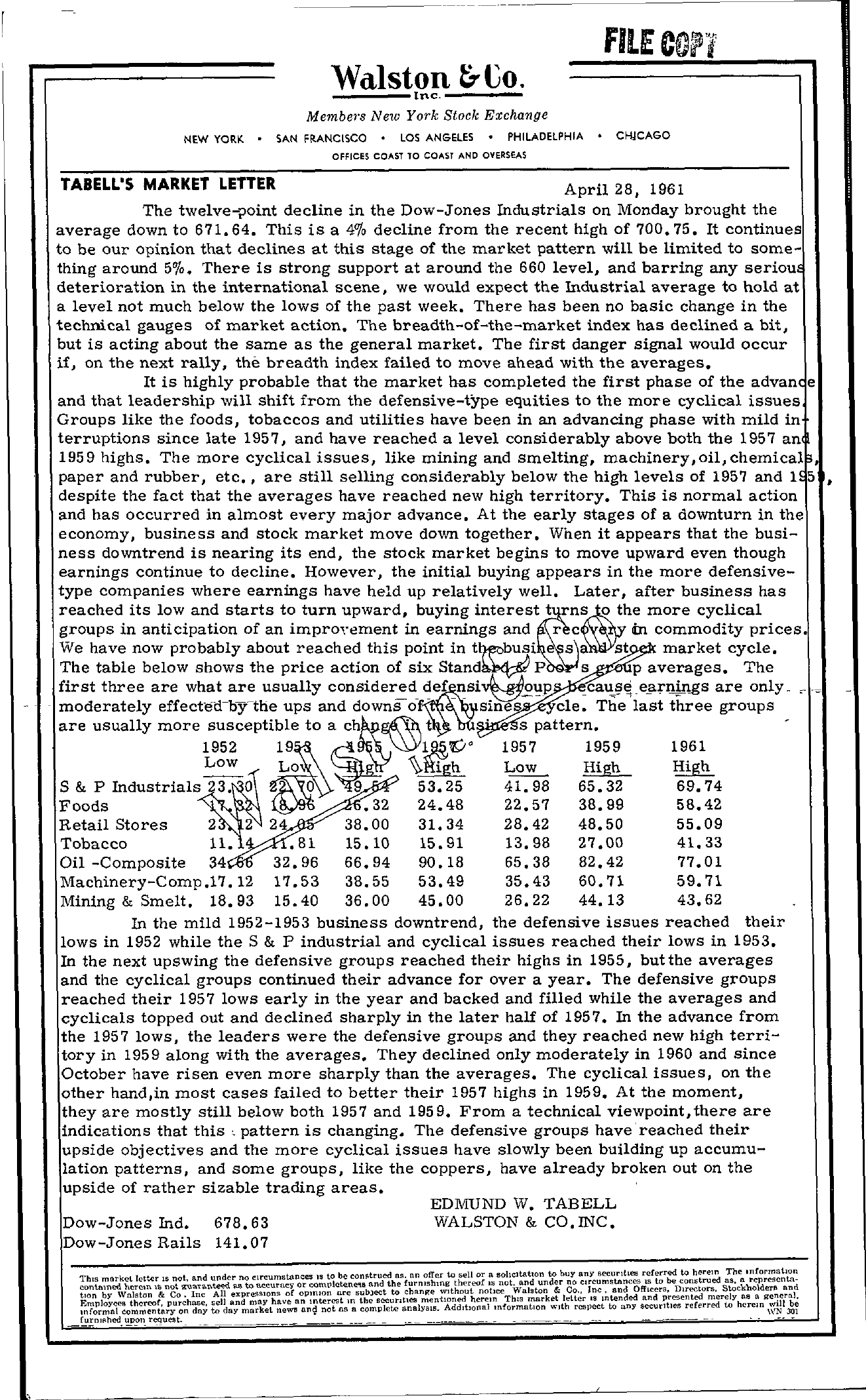 FILE COfl Walston &CO. Inc. Membe1's New York Stock Exchange NEW YORK SAN FRANCISCO LOS ANGELES PHILADELPHIA CHJCAGO OFFICES COAST TO COAST AND OVERSEAS TABELL'S MARKET LETTER April 28, 1961 The twelve-point decline in the Dow-Jones Industrials on Monday brought the average down to 671.64. This is a 40/0 decline from the recent high of 700.75. It continues to be our opinion that declines at this stage of the market pattern will be limited to thing around 50/0. There is strong support at around the 660 level, and barring any seriouf deterioration in the international scene, we would expect the Industrial average to hold at a level not much below the lows of the past week. There has been no basic change in the technical gauges of market action. The breadth-of-the-market index has declined a bit, but is acting about the same as the general market. The first danger signal would occur if, on the next rally, the breadth index failed to move ahead with the averages. It is highly probable that the market bas completed the first phase of the advanc e and that leadership will shift from the defensive-type equities to the more cyclical issues Groups like the foods, tobaccos and utilities have been in an advancing phase with mild in terruptions since late 1957, and have reached a level considerably above both the 1957 an 1959 highS. The more cyclical issues, like mining and smelting, machinery,oil,chemical , paper and rubber, etc., are still selling considerably below the high levels of 1957 and H 5 , despite the fact that the averages have reached new high territory. This is normal action and has occurred in almost every major advance. At the early stages of a downturn in the economy, business and stock market move down together. When it appears that the busi- ness downtrend is nearing its end, the stock market begins to move upward even though earnings continue to decline. However, the initial buying appears in the more defensive- type companies where earnings have held up relatively well. Later, after business has reached its low and starts to turn upward, buying groups in anticipation of an improYement in earnings and r c the more cyclical lin commodity prices We have now probably about reached this point in s market cycle. The table below shows the price action of six Ps averages. The first three are what are usually ef .. moderately effected-bythe ups and downs of smes caujlt;.e.-rn!nj(s are only cleo The last three groups are usually more susceptible to a t . s pattern. – 1952 (/ 1957 1959 1961 Low Lo Piigh High High Foods .32 24.48 41.98 65.32 22.57 38.99 69.74 58.42 Retail Stores 2 2 24 38.00 31.34 28.42 48.50 55.09 Tobacco 11. .Bl 15.10 15.91 13.98 27.00 41.33 Oil -Composite 34 32.96 66.94 90. 18 65.38 82.42 77.01 Machinery-Comp.17.12 17.53 38.55 53.49 35.43 60.71 59.71 Mining & Smelt. 18.93 15.40 36.00 45.00 26.22 44.13 43.62 In the mild 1952-1953 business downtrend, the defensive issues reached their lows in 1952 while the S & P industrial and cyclical issues reached their lows in 1953. In the next upswing the defensive groups reached their highs in 1955, butthe averages and the cyclical groups continued their advance for over a year. The defensive groups reached their 1957 lows early in the year and backed and filled while the averages and cyclicals topped out and declined sharply in the later half of 1957. In the advance from the 1957 lows, the leaders were the defensive groups and they reached new high tory in 1959 along with the averages. They declined only moderately in 1960 and since October have risen even more sharply than the averages. The cyclical issues, on the other hand,in most cases failed to better their 1957 highs in 1959. At the moment, they are mostly still below both 1957 and 1959. From a technical viewpoint, there are indications that this, pattern is changing. The defensive groups have reached their upside objectives and the more cyclical issues have slowly been building up accumu- lation patterns, and some groups, like the coppers, have already broken out on the upside of rather sizable trading areas. Dow-Jones Ind. 678.63 EDMUND W. TAB ELL WALSTON & CO. INC. Dow-Jones Rails 141. 07