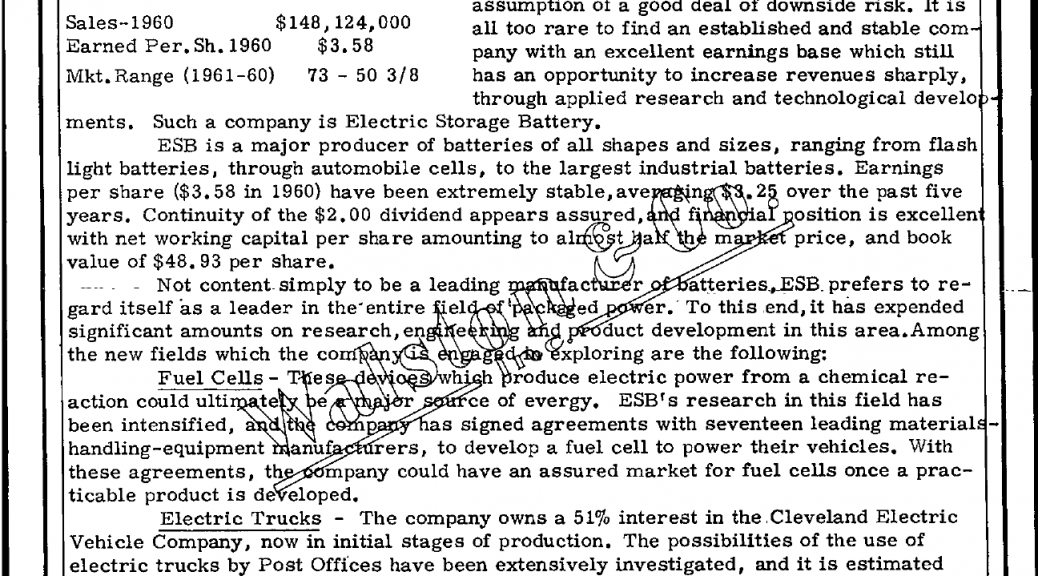 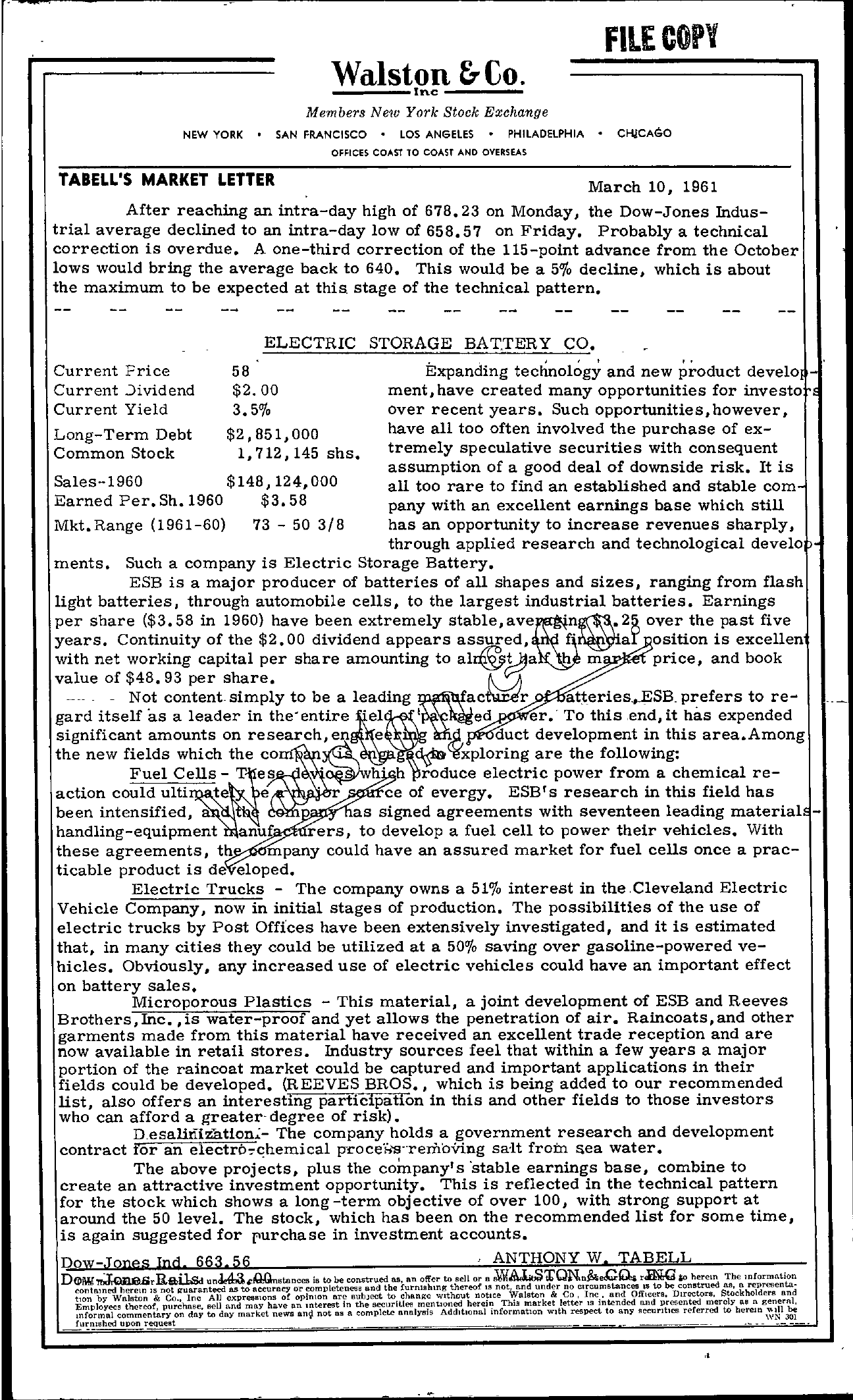 Walston &Co. FILE COpy Members New York Stock Exchange NEW YORK SAN FRANCISCO LOS ANGELES PHILADELPHIA CHICAGO OFFICES COAST TO COAST AND OVERSEAS TABELL'S MARKET LETTER March 10, 1961 After reaching an intra-day high of 678.23 on Monday, the Dow-Jones Industrial average declined to an intra-day low of 658.57 on Friday. Probably a technical correction is overdue. A one-third correction of the 115-point advance from the October lows would bring the average back to 640. This would be a 5/0 decline, which is about the maximum to be expected at this stage of the technical pattern. ELECTRIC STORAGE BATTERY CO. Current Frice 58 Expanding and new develo Current 2.00 ment, have created many opportunities for investo Current Yield 3.5 over recent years. Such opportunities, however, Long-Term Debt Common Stock 2,851,000 1,712, 145 shs. Sales-1960 148,124,000 Earned Per. Sh.1960 3.58 have all too often involved the purchase of extremely speculative securities with consequent assumption of a good deal of downside risk. It is all too rare to find an established and stable com pany with an excellent earnings base which still Mkt.Range (1961-60) 73 – 50 3/8 has an opportunity to increase revenues sharply, through applied research and technological develo ments. Such a company is Electric Storage Battery. ESB is a major producer of batteries of all shapes and sizes, ranging from flash light batteries, through automobile cells, to the largest industrial batteries. Earnings per share (3.58 in 1960) have been extremely stable, 2li, over the past five years. Continuity of the 2.00 dividend appears assured, osition is excellen with net working capital per share amounting to alrtJ1a h m VAvalue of 48. 93 per share. t\ price, and book —. – Not content simply to be a leading atteries.,.ESB. prefers to re- gard itself as a leader in significant amounts on research, en e ed er. To this end, it has expended \.0. duct development in this area. Among the new fields which the are the following Fuel Cells – T es h roduce electric power from a chemical re- action could ulti te e . ce of evergy. ESB' s research in this field has been intensified, a as signed agreements with seventeen leading material – handling-equipment anuf rers, to develop a fuel cell to power their vehicles. With these agreements, th mpany could have an assured market for fuel cells once a prac- ticable product is de eloped. Electric Trucks – The company owns a 51 interest in the .Cleveland Electric Vehicle Company, now in initial stages of production. The possibilities of the use of electric trucks by Post OffIces have been extensively investigated, and it is estimated that, in many cities they could be utilized at a 50 saving over gasoline-powered ve- hicles. Obviously, any increased use of electric vehicles could have an important effect on battery sales. Microporous Plastics – This material, a joint development of ESB and Reeves Brothers,Inc. ,is water-proof and yet allows the penetration of air. Raincoats,and other garments made from this material have received an excellent trade reception and are now available in retail stores. Industry sources feel that within a few years a major portion of the raincoat market could be captured and important applications in their fields could be developed. (REEVES BROS., which is being added to our recommended list, also offers an interesting participation in this and other fields to those investors who can afford a greater degree of risk). The company holds a government research and development contract for an electro,chemical proce'lrrembVing saU froin &ea water. The above plus the company's 'stable earnings base, combine to create an attractive investment opportunity. This is reflected in the technical pattern for the stock which shows a long -term objective of over 100, with strong support at around the 50 level. The stock, which has been on the recommended list for some time, is again suggested for purchase in investment accounts. Dow-Jones Ind, 663.56 ' ANTHONY W. TABELL unJriba,&OOnswnces is to be construed as, an offer to sell or a rmQ iO herein The mformation contalOed herein IS not guaranteed as to aCCUracy or completeness and the furnishing thereof IS not, and under no cIrcumstances IS to be construed as, a representa- tlOn b)' Walston & Co Inc All expressions of opimon arc subJect to change without 'Ynlston & Co, Inc, and Officers, Directors, Stockholders and Employees thereof, purchase, sell and may have an Interest in the securities Thl.!1 market letter IS intended n.nd presented merely as IL geneml. Informal commentary on day to day market news any' not ILl! a complete analysIs AddItional informatIOn WIth respect to nnlo' securities referred to herein furnlshc'd upon request .