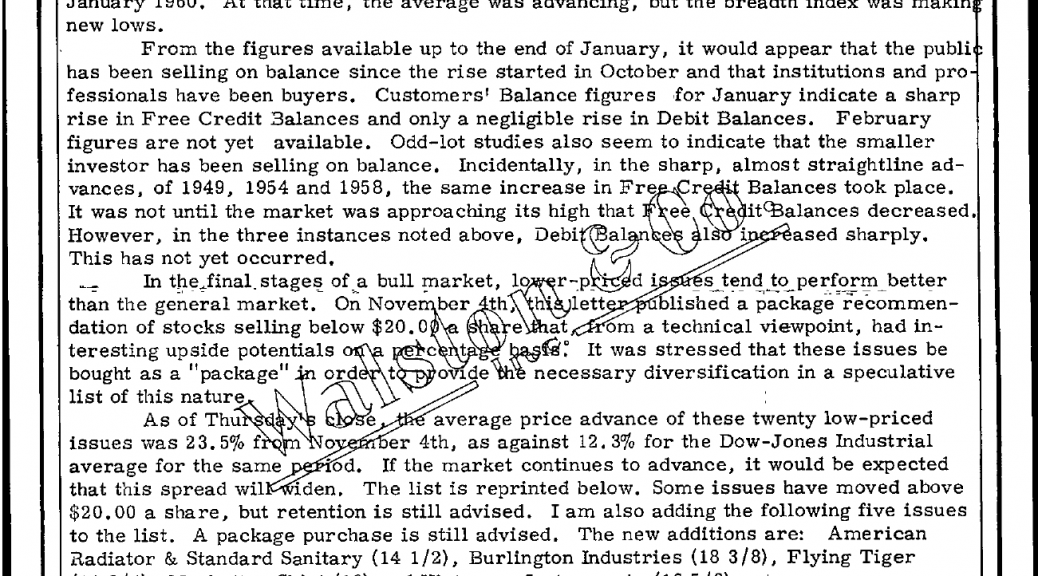 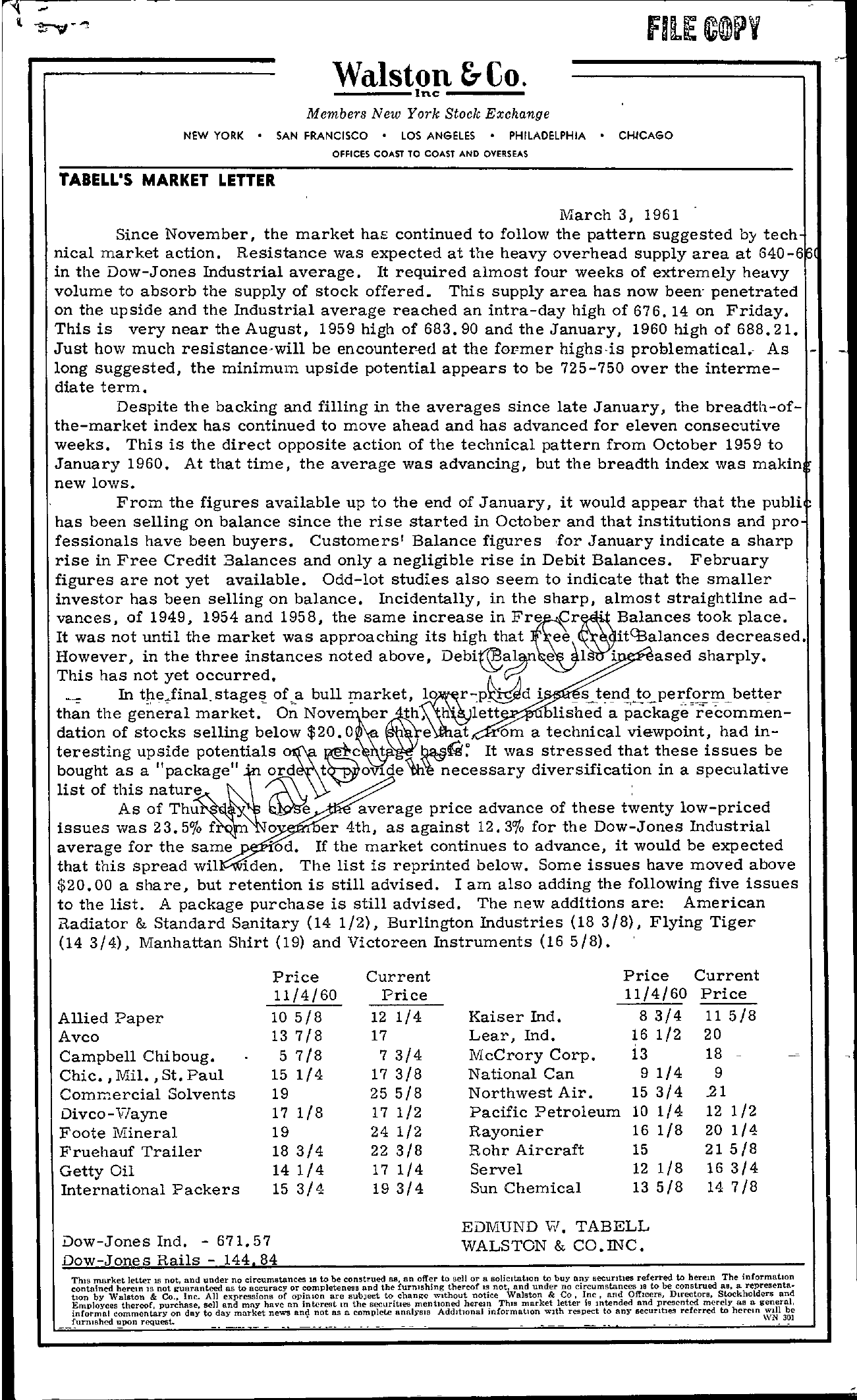 Walston &CO. Inc Members New York Stock Exchange NEW YORK SAN FRANCISCO LOS ANGELES PHILADELPHIA CHICAGO OFFices COAST TO COAST AND OVERSEAS TABELL'S MARKET LEnER March 3, 1961 Since November, the market has continued to follow the pattern suggested by tech nical market action. Resistance was expected at the heavy overhead supply area at in the Dow-Jones Industrial average. It required almost four weeks of extremely heavy volume to absorb the supply of stock offered. This supply area has now been- penetrated on the upside and the Industrial average reached an intra-day high of 676. 14 on Friday. This is very near the August, 1959 high of 683.90 and the January, 1960 high of 688.21. Just how much resistance'will be encountered at the fOl'mer highs-is problematical. As – long suggested, the minimum upside potential appears to be 725-750 over the interme- diate term. Despite the backing and filling in the averages since late January, the breadth-of- the-market index has continued to move ahead and has advanced for eleven consecutive weeks. This is the direct opposite action of the technical pattern from October 1959 to January 1960. At that time, the average was advancing, but the breadth index was makin new lows. From the figures available up to the end of January, it would appear that the publi has been selling on balance since the rise started in October and that institutions and pro fessionals have been buyers. Customers' Balance figures ,for January indicate a sharp rise in Free Credit Balances and only a negligible rise in Debit Balances. February figures are not yet available. Odd-lot studies also seem to indicate that the smaller investor has been selling on balance. Incidentally, in the sharp, almost straightline ad- vances, of 1949, 1954 and 1958, the same increase in took place. It was not until the market was approaching its high that ee itCBalances decreased. However, in the three instances noted above, This has not yet occurred. 1\. VA e l i ased sharply. ..,- In bull !llarket, i than the general market. On Nove 11' lett blished a packagerecommen- dation of stocks selling below 20.0 e at om a technical viewpoint, had in- teresting upside potentials ct It was stressed that these issues be list of this nature As of Thu \We average price advance of these twenty low-priced issues was 23.5 f 0 IUer 4th, as against 12.30/0 for the Dow-Jones Industrial average for the same od. If the market continues to advance, it would be expected that this spread wiI iden. The list is reprinted below. Some issues have moved above 20.00 a share, but retention is still advised. I am also adding the following five issues to the list. A package purchase is still advised. The new additions are American Radiator & Standard Sanitary (141/2), Burlington Industries (18 3/8), Flying Tiger (143/4), Manhattan Shirt (19) and Victoreen Instruments (165/8). Allied Paper Avco Campbell Chiboug. Chic. ,Mil. ,St. Paul Commercial Solvents Divco-v7ayne Foote Mineral Fruehauf Trailer Getty Oil International Packers Price 11/4/60 10 5/8 13 7/S 5 7/S 15 1/4 19 17 l/S 19 IS 3/4 14 1/4 15 3/4 Current Price 12 1/4 17 7 3/4 17 3/S 25 5/S 17 1/2 24 1/2 22 3/S 17 1/4 19 3/4 Price Current 11/4/60 Price Kaiser Ind. 8 3/4 Lear, Ind. 16 1/2 McCrory Corp. 13 National Can 9 1/4 Northwest Air. 15 3/4 Pacific Petroleum 10 1/4 11 5/8 20 18 – 9 21 12 1/2 Rayonier Rohr Aircraft 16 l/S 20 1/4 15 21 5/S Serve1 Sun Chemical 12 l/S 16 3/4 13 5/S 14 7/S – Dow-Jones Ind. – 671.57 Dow Jones Rails – 144. S4 EDMUND yv. TABELL WALSTON & CO.INC. This market letter 15 not and under no eircurnstnnces 16 to be construed 8S, an offer to sell or a soliCitation to buy any securities referred. to herem The informatIOn contained herem 18 not as to accuracy or completeness and the furDlshing thereof IS not, and under no circumstances 19 to be construed as, 8. representa- tIOn by Walston & Co.. Inc. All expressions of opinion are subJect to change Without notice Walston & Co, Inc, and Officers, Directors, Stockholders and Employees thereof purchase, sell and may have an interest to the securities mentioned herem ThiS market letter is mtended and presented merely as a general, informal on day to day market news not as a complete analysIS Addltwnai informatIOn WIth respect to any securities referred to herem ,,111 be furmshed upon request. . . . .. .. . . . 'N.31