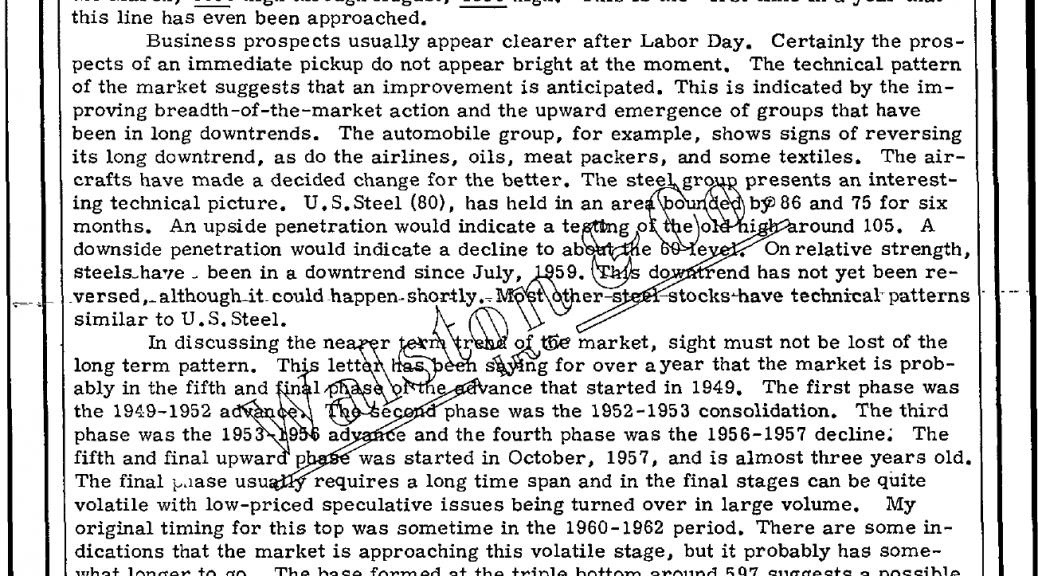 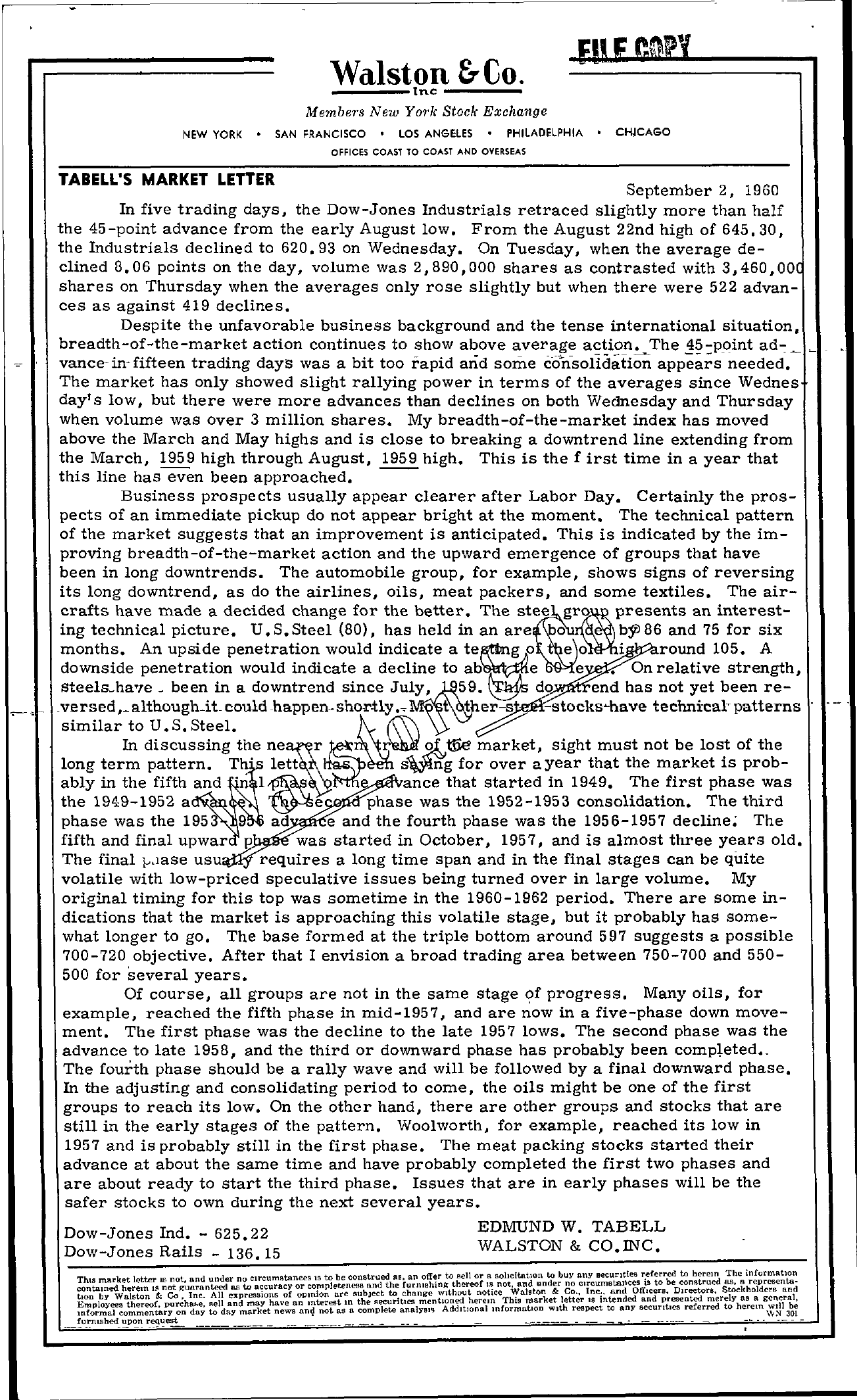 Walston &CO. Inc – – – – – Members New York Stock Exchange NEW YORK SAN FRANCISCO LOS ANGELES PHILADELPHIA CH.JCAGO OFFICES COAST TO COAST AND OVERSEAS TABELL'S MARKET LETTER September 2, 1960 In five trading days, the Dow-Jones Industrials retraced slightly more than half the 45-point advance from the early August low. From the August 22nd high of 645.30, the Industrials declined to 620.93 on Wednesday. On Tuesday, when the average de- clined 8.06 points on the day, volume was 2,890,000 shares as contrasted with 3,460,00 shares on Thursday when the averages only rose slightly but when there were 522 advan- ces as against 419 declines. Despite the unfavorable business background and the tense international situation, breadth-of-the-market action continues to show above average action. The 45-point ad- in- fifteen trading days was a bit too rapid and some needed. The market has only showed slight rallying power in terms of the averages since Wednes day' slow, but there were more advances than declines on both Wednesday and Thursday when volume was over 3 million shares. My breadth-of-the-market index has moved above the March and May highs and is close to breaking a downtrend line extending from the March, 1959 high through August, 1959 high. This is the first time in a year that this line has even been approached. – – Business prospects usually appear clearer after Labor Day. Certainly the pros- pects of an immediate pickup do not appear bright at the moment. The technical pattern of the market suggests that an improvement is anticipated. This is indicated by the im- proving breadth-of-the-market action and the upward emergence of groups that have been in long downtrends. The automobile group, for example, shows signs of reversing its long downtrend, as do the airlines, oils, meat packers, and some textiles. The air- crafts have made a decided change for the better. The an interest- ing technical picture. U. S. Steel (80), has held in an are 0 e bY' 86 and 75 for six months. An upside penetration would indicate a eo i round 105. A downside penetration would indicate a decline to e On relative strength, steelshave been in a downtrend since 59. do end has not yet been re- t t er-s – technical-patterns similar to U S. Steel. In discussing the ne r rW 0 market, sight must not be lost of the long term pattern. Th Ieill' for over ayear that the market is prob- ably in the fifth and . ance that started in 1949. The first phase was the 1949-1952 a phase was the 1952-1953 consolidation. The third phase was the 195 ad e and the fourth phase was the 1956-1957 decline; The fifth and final upwar R was started in October, 1957, and is almost three years old. The final l–.lase usu requires a long time span and in the final stages can be quite volatile with low-priced speculative issues being turned over in large volume. My original timing for this top was sometime in the 1960-1962 period. There are some in- dications that the market is approaching this volatile stage, but it probably has some- what longer to go. The base formed at the triple bottom around 597 suggests a possible 700-720 objective. After that I envision a broad trading area between 750-700 and 550- 500 for several years. Of course, all groups are not in the same stage of progress. Many oilS, for example, reached the fifth phase in mid-1957, and are now in a five-phase down move- ment. The first phase was the decline to the late 1957 lows. The second phase was the advance to late 1958, and the third or downward phase has probably been The fourth phase should be a rally wave and will be followed by a final downward phase. In the adjusting and consolidating period to come, the oils might be one of the first groups to reach its low. On the other hand, there are other groups and stocks that are still in the early stages of the pattern. Woolworth, for example, reached its low in 1957 and is probably still in the first phase. The meat packing stocks started their advance at about the same time and have probably completed the first two phases and are about ready to start the third phase. Issues that are in early phases will be the safer stocks to own during the next several years. Dow-Jones Ind. – 625.22 Dow-Jones Rails – 136.15 EDMUND W. TABELL WALSTON & CO.INC.