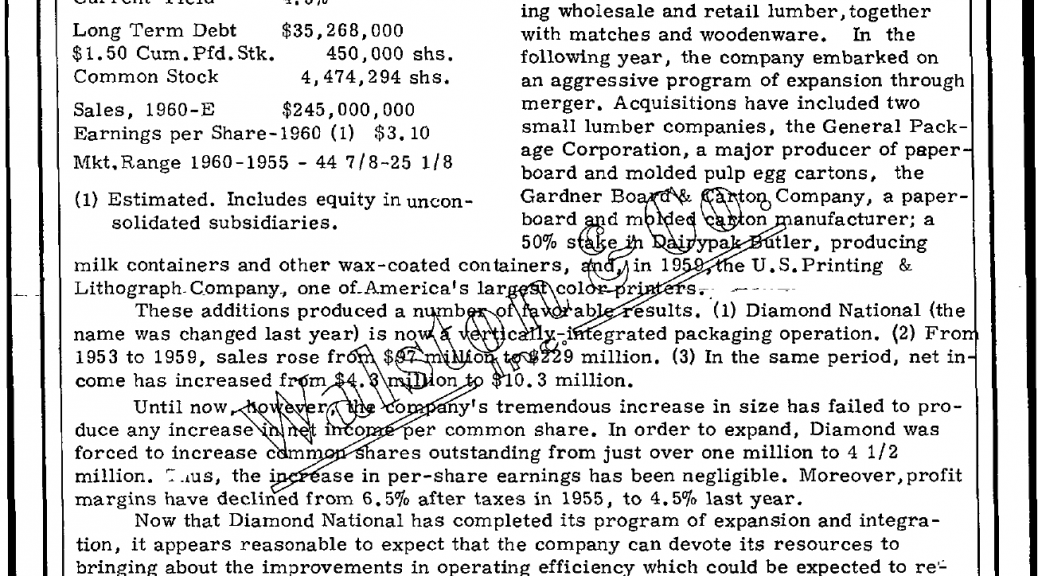 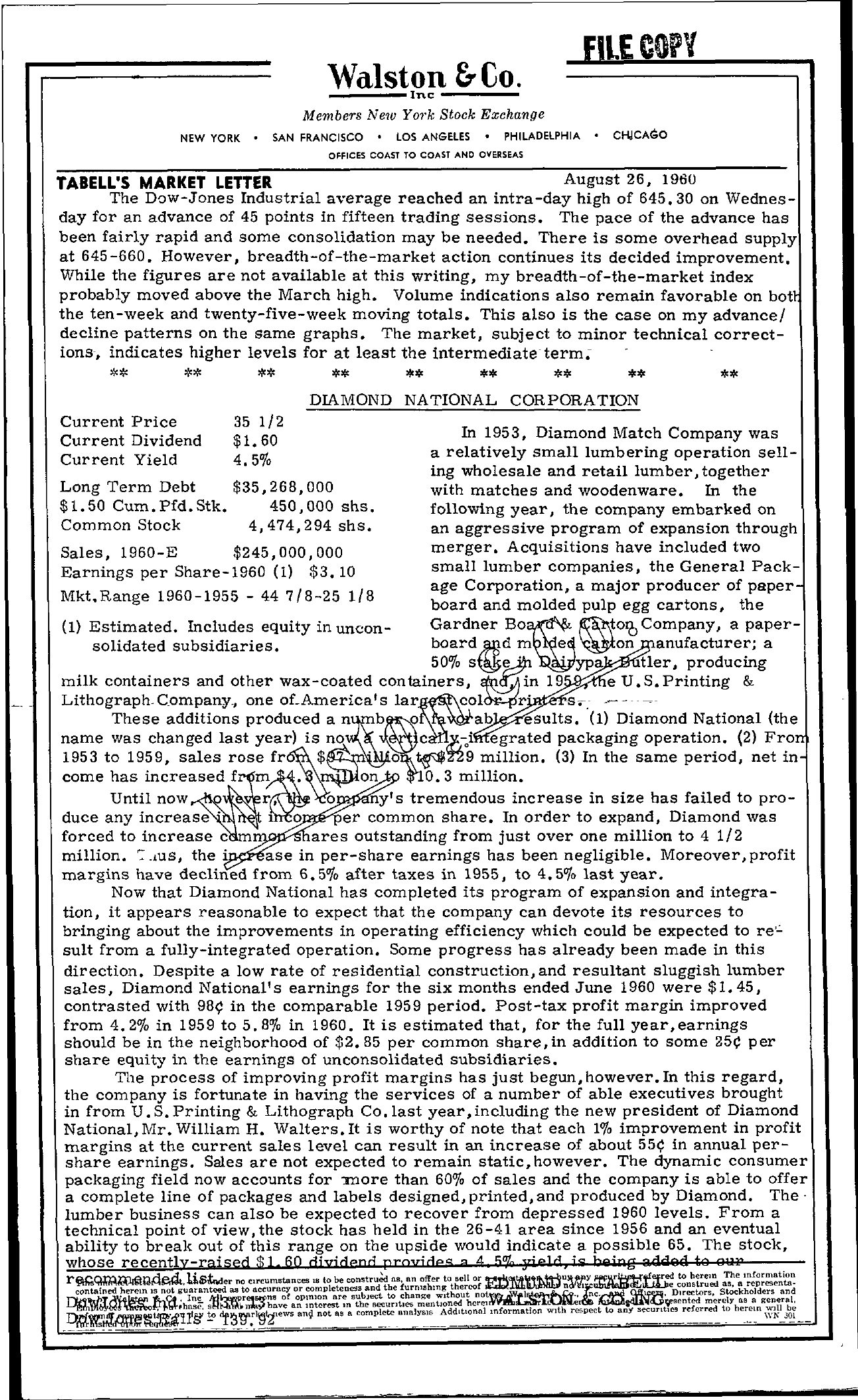 Walston &-Co. LECO'Y Members New Y01'k Stock Exchange NEW YORK . SAN FRANCISCO LOS ANGELES PHILADELPHIA . CH.lCAGo OFFICES COAST TO COAST AND OVERSEAS lABELL'S MARKET LETTER August 26, 1960 The Dow-Jones Industrial average reached an intra-day high of 645.30 on Wednes- day for an advance of 45 points in fifteen trading sessions. The pace of the advance has been fairly rapid and some consolidation may be needed. There is some overhead supply at 645-660. However, breadth-of-the-market action continues its decided improvement. While the figures are not available at this writing, my breadth-of-the-market index probably moved above the March high. Volume indications also remain favorable on bot the ten-week and twenty-five-week moving totals. This also is the case on my advance/ decline patterns on the same graphs. The market, subject to minor technical correct- ions, indicates higher levels for at least the intermediate term; DIAMOND NATIONAL CORPORATION Current Price Current Dividend Current Yield 35 1/2 1.60 4.5 Long Term Debt 35,268,000 1.50 Cum.Pfd.Stk. 450,000 shs. Common Stock 4,474,294 shs. In 1953, Diamond Match Company was a relatively small lumbering operation selling wholesale and retail lumber, together with matches and woodenware. In the following year, the company embarked on an aggressive program of expansion through Sales, 1960-E 245,000,000 Earnings per Share-1960 (1) 3.10 Mkt.Range 1960-1955 – 44 7/8-25 1/8 merger. Acquisitions have included two small lumber companies, the General Package Corporation, a major producer of paper board and molded pulp egg cartons, the (1) Estimated. Includes equity in unconsolidated subsidiaries. Gardner boardld m 50 e . ypa Company, a paperanufacturer; a tler, producing milk containers and other wax-coated containers, 19 e U.S. Printing & Lithograph.Company., one oLAmerica's -s., — .. These additions produced a ab esults. (1) Diamond National (the name was changed last year) is no egrated packaging operation. (2) Fro 1953 to 1959, sales rose million. (3) In the same period, net in come has f Until now duce any increase' r, 10 flo. 3 million. 0 ny's tremendous increase in size has failed to pro- er common share. In order to expand, Diamond was forced to increase c m ares outstanding from just over one million to 4 1/2 million. ' .us, the i ase in per-share earnings has been negligible. Moreover, profit margins have declined from 6.5/0 after taxes in 1955, to 4.5/0 last year. Now that Diamond National has completed its program of expansion and integra- tion, it appears reasonable to expect that the company can devote its resources to bringing about the improvements in operating efficiency which could be expected to suIt from a fully-integrated operation. Some progress has already been made in this direction. Despite a low rate of residential construction, and resultant sluggish lumber sales, Diamond National's earnings for the six months ended June 1960 were 1. 45, contrasted with in the comparable 1959 period. Post-tax profit margin improved from 4.2 in 1959 to 5.8 in 1960. It is estimated that, for the full year,earnings should be in the neighborhood of 2.85 per common share, in addition to some per share equity in the earnings of unconsolidated subsidiaries. The process of improving profit margins has just begun, however. In this regard, the company is fortunate in having the services of a number of able executives brought in from U. S. Printing & Lithograph Co. last year, including the new president of Diamond National, Mr. William H. Walters. It is worthy of note that each 1 improvement in profit margins at the current sales level can result in an increase of about in annual pershare earnings. Sales are not expected to remain static,however. The dynamic consumer packaging field now accounts for more than 60 of sales and the company is able to offer a complete line of packages and labels designed, printed, and produced by Diamond. The lumber business can also be expected to recover from depressed 1960 levels. From a technical point of view, the stock has held in the 26 -41 area since 1956 and an eventual ability to break out of this range on the upside would indicate a possible 65. The stock, whose recently-raised 1.60 dividend provides a 4 5 Jrie1d,is heing a4g8Q tQ QYP