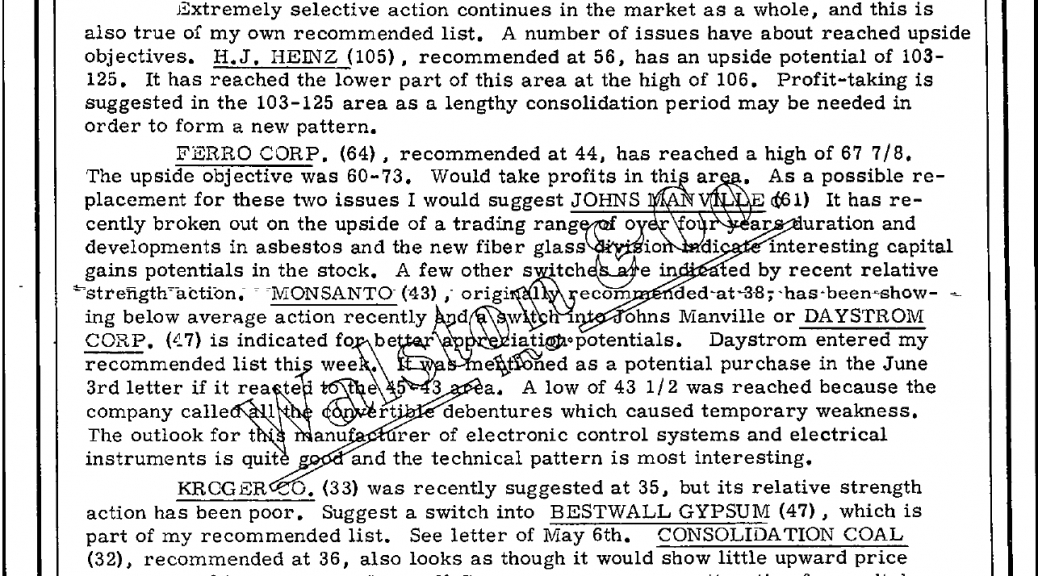 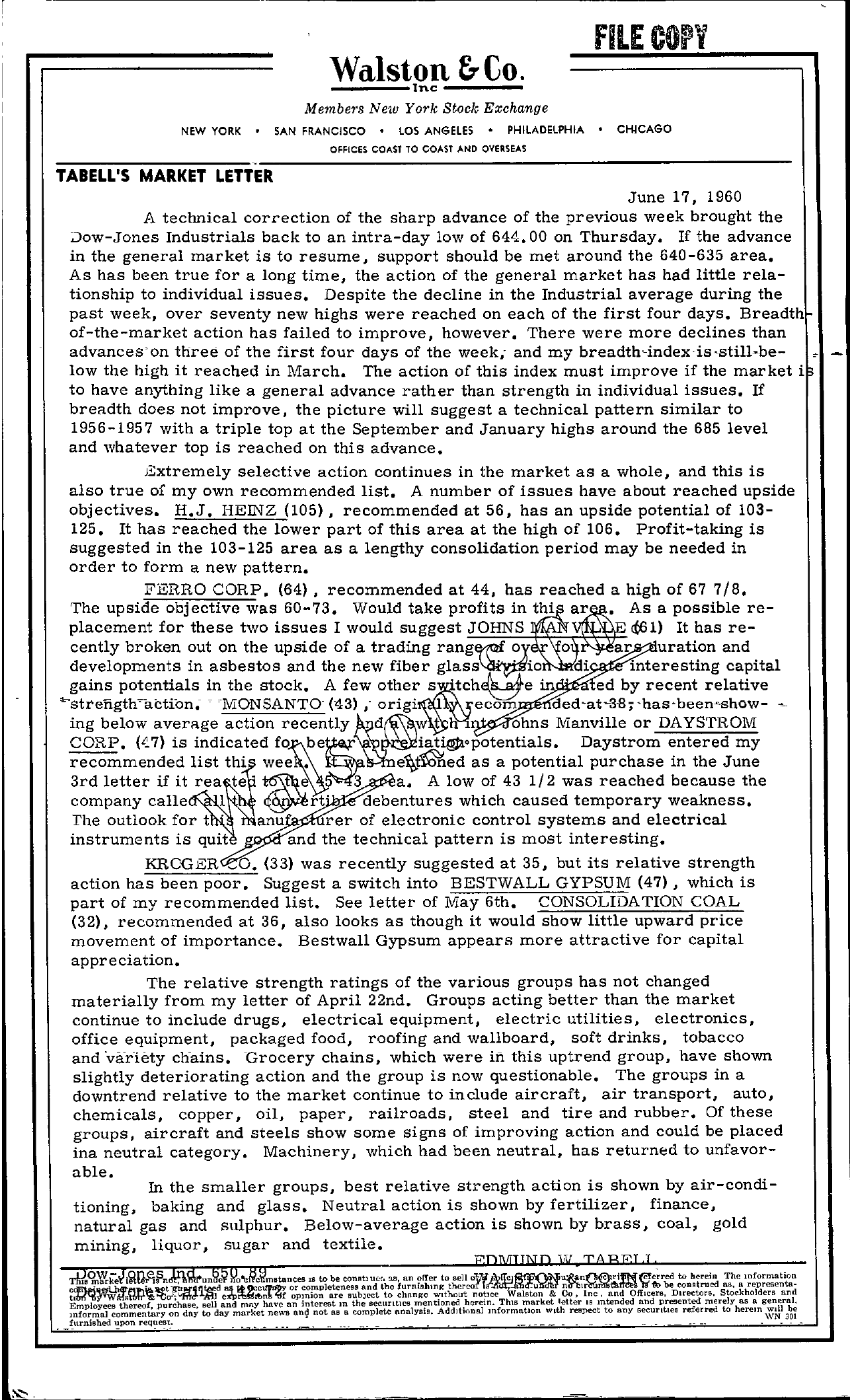 FILE COpy Walston &Co. Members New York Stock Exchange NEW YORK SAN FRANCISCO LOS ANGELES PHILADELPHIA CHICAGO OFFICES COAST TO COAST AND OVERSEAS TABELL'S MARKET LETTER June 17, 1960 A technical correction of the sharp advance of the previous week brought the Jow-Jones Industrials back to an intra-day low of 644.00 on Thursday. If the advance in the general market is to resume, support should be met around the 640-635 area. As has been true for a long time, the action of the general market has had little relationship to individual issues. Despite the decline in the Industrial average during the past week, over seventy new highs were reached on each of the first four days. Breadth of-the-market action has failed to improve, however. There were more declines than advances'on three of the first four days of the weeki and my low the high it reached in March. The action of this index must improve if the market i to have anything like a general advance rather than strength in individual issues. If breadth does not improve, the picture will suggest a technical pattern similar to 1956-1957 with a triple top at the September and January highs around the 685 level and whatever top is reached on this advance. Bxtremely selective action continues in the market as a whole, and this is also true of my own recommended list. A number of issues have about reached upside objectives. H.J. HElliZ (l05), recommended at 56, has an upside potential of 103125. It has reached the lower part of this area at the high of 106. Profit-taking is suggested in the 103-125 area as a lengthy consolidation period may be needed in order to form a new pattern. FERRO CORP. (64), recommended at 44, has reached a high of 67 7/8. The upside objective was 60-73. Would take profits in thi As a possible re- placement for these two issues I would suggest JOHNS 61) It has re- cently broken out on the upside of a trading rango/(Qf oy 0 ar uration and developments in asbestos and the new fiber tii interesting capital in the stock. A few strength-actlOn. -MONSANTO (43) ,- ongl in' ed by recent relative ecom aed-at-3-8; ing below average action recently t Ii ohns Manville or DAYSTROM CORP. (47) is indicated Daystrom entered my recommended list thi wee as a potential purchase in the June 3rd letter if it rea te 3 a. A low of 43 1/2 was reached because the company calle 1 debentures which caused temporary weakness. The outlook for t' anu rer of electronic control systems and electrical instruments is quit and the technical pattern is most interesting. KROGBR (33) was recently suggested at 35, but its relative strength action has been poor. Suggest a switch into BESTWALL GYPSUM (47), which is part of my recommended list. See letter of May 6th. CONSOLIDATION COAL (32), recommended at 36, also looks as though it would show little upward price movement of importance. Bestwall Gypsum appears more attractive for capital appreciation. The relative strength ratings of the various groups has not changed materially from my letter of April 22nd. Groups acting better than the market continue to include drugs, electrical equipment, electric utilities, electronics, office equipment, packaged food, roofing and wallboard, soft drinks, tobacco and -variety ch-ains. Grocery chains, which were in this uptrend group, have shown slightly deteriorating action and the group is now questionable. The groups in a downtrend relative to the market continue to include aircraft, air transport, auto, chemicals, copper, oil, paper, railroads, steel and tire and rubber. Of these groups, aircraft and steels show some signs of improving action and could be placed ina neutral category. Machinery, which had been neutral, has return(;d to unfavor- able. In the smaller groups, best relative strength action is shown by air-condi- tioning, baking and glass. Neutral action is shown by fertilizer, finance, natural gas and sulphur. Below-average action is shown by brass, coal, gold mining, liquor, sugar and textile. FDIVjITND 3M TA BET ,I, un e c mstnnces IS to be constiUt.'1. as, an ofter to sell to herein The Information . Vt tl'iJrI''1'i1WMIIQX;1'41''CoJ,''.fna- .eJ B4 totf)!ctt;'dOy or completeness .nnd the furnishing thcrcofts.tRtt;'–k6ctu)(dH 'dr opmion are BubJect to chn.ngc notlC(' Walston & Co, Inc, and 1b be construed as, a representaOfficers, Directors, Stockholders and dnyEmployees thereof purchasc sell and may ha\'c an interest m the SecUrltlCS rncntlonca herein. ThiS market letter 18 mtended and presented merely as a general, commentro.y on to day market news nnq not as n complete analysis. Additional mfOrmatlon wIth respect to any securities referred to herem . . . .. , .. . .. —