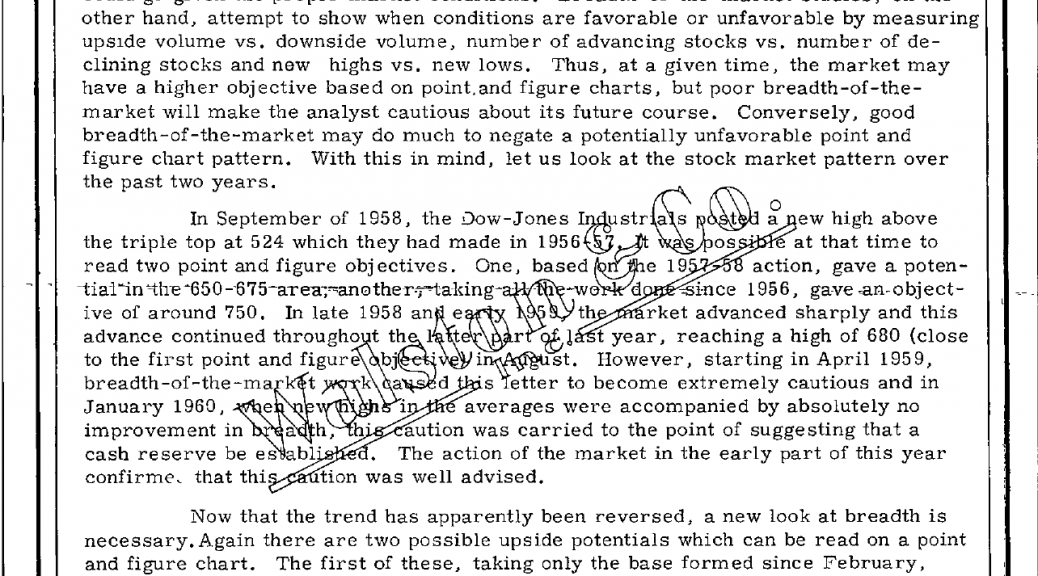 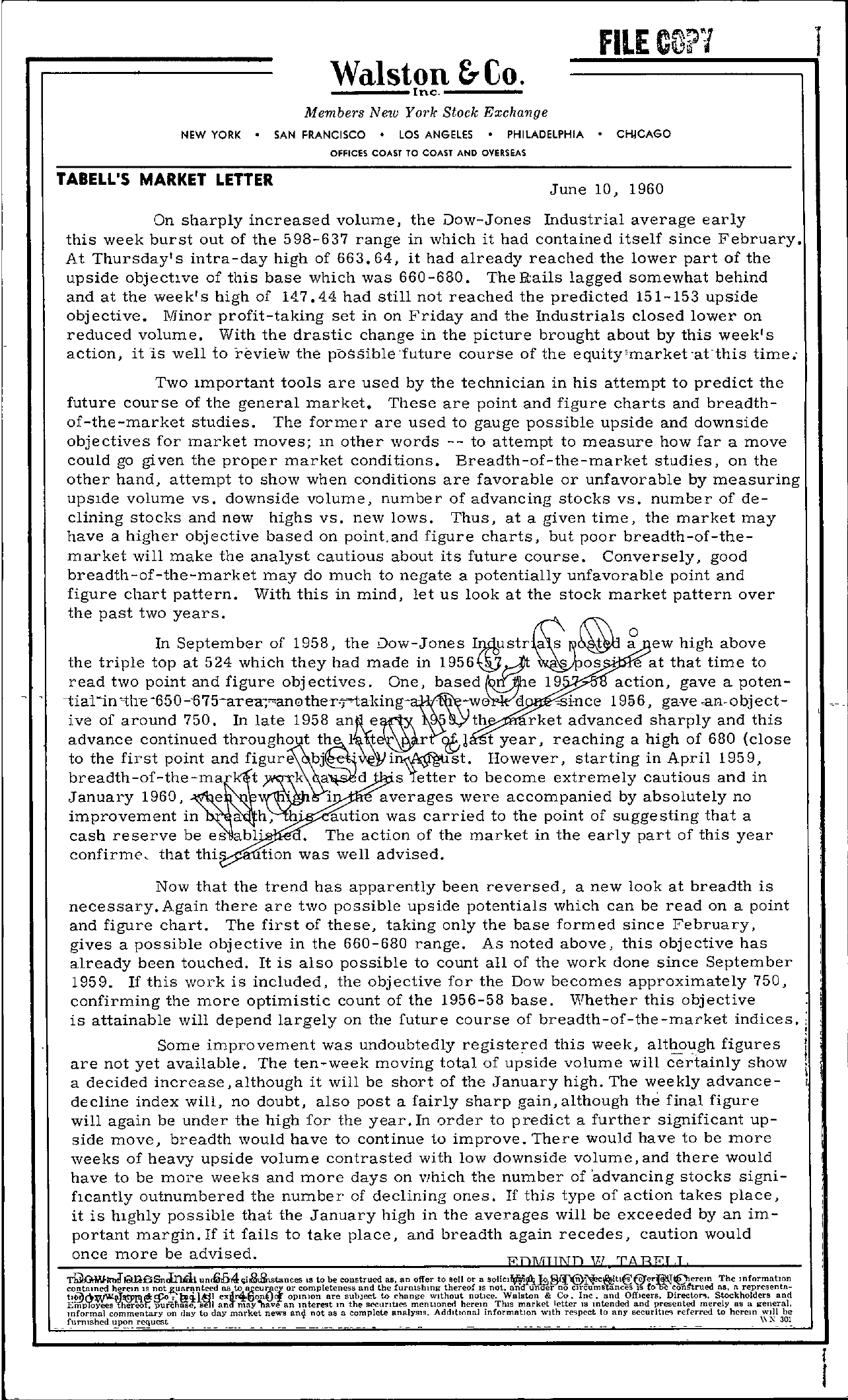 Walston &- Inc, Co . FILE &0('/ 1 Members New Y01'k Stock Exchange NEW YORK SAN FRANCISCO LOS ANGELES PHILADELPHIA CHlCAGO OFFICES COAST TO COAST AND OVERSEAS TABELL'S MARKET LETTER June 10, 1960 On sharply increased volume, the vow-Jones Industrial average early this week burst out of the 598-637 range in which it had contained itself since February. At Thursday's intra-day high of 663.64, it had already reached the lower part of the upside objectlve of this base which was 660 -680. The Rails lagged somewhat behind and at the week's high of 147.4.4 had still not reached the predicted 151-153 upside objective. Minor profit-taking set in on Friday and the Industrials closed lower on reduced volume. With the drastic change in the picture brought about by this week's action, it Is well to review the possible 'future course of the e quity 'market 'at'this time .. Two Important tools are used by the technician in his attempt to predict the future course of the general market. These are point and figure charts and breadthof-the-market studies. The former are used to gauge possible upside and downside objectives for market moves; In other words — to attempt to measure how far a move could go given the proper market conditions. Breadth-of-the-market studies, on the other hand, attempt to show when conditions are favorable or unfavorable by measuring upside volume vs. downside volume, number of advancing stocks vs. number of declining stocks and new highs vs. new lows. Thus, at a given time, the market may have a higher objective based on point,and figure charts, but poor breadth-of-themarket will make the analyst cautious about its future course. Conversely, good breadth-of-the-market may do much to negate a potentially unfavorable point and figure chart pattern. With this in mind, let us look at the stock market pattern over the past two years. In September of 1958, the Dow-Jones ew high above the triple top at 524 which they had made in ' e at that time to read two point and figure objectives. One, based (Qrf'Jihe 19 action, gave a poten- -weWd, 1956, gave .arJ.-object- ive of around 750. In late 1958 advance continued th rket advanced sharply and this '(b! t year, reaching a high of 680 (close to the first point and figure bj , However, starting in April 1959, a d ' s tetter to become extremely cautious and in January 1960, e 'i averages were accompanied by absolutely no improvement in a h, h' aution was carried to the point of suggesting that a cash reserve be es abl' . The action of the market in the early part of this year confirmE', that thi tion was well advised. Now that the trend has apparently been reversed, a new look at breadth is necessary. Again there are two possible upside potentials which can be read on a point and figure chart. The first of these, taking only the base formed since February, gives a possible objective in the 660-680 range. As noted above, this objective has already been touched. It is also possible to count all of the work done since September 1959. If this work is included, the objective for the Dow becomes approximately 750, confirming the more optimistic count of the 1956-58 base. Whether this objective is attainable will depend largely on the future course of breadth-of-the-market indices. ; i Some improvement was undoubtedly registered this week, although figures are not yet available. The ten-week moving total of upside volume will certainly show a decided increase, although it will be short of the January high. The weekly advancedecline index will, no doubt, also post a fairly sharp gain, although the final figure will again be under the high for the year. In order to predict a further significant up- side move, breadth would have to continue to improve. There would have to be more weeks of heavy upside volume contrasted with low downside volume, and there would have to be more weeks and more days on vlhich the number of 'advancing stocks significantly outnumbered the number of declining ones. If this type of action takes place, it is highly possible that the January high in the averages will be exceeded by an im- portant margin. If it fails to take place, and breadth again recedes, caution would once more be advised. EDJ\lUTND 1U TA BPI ,I, ri&Grw1nl1CtU8SnJrlGi IS to be construed as, an offer to 9'!II or a SOIiCIWrA The InformatIOn contnmed herem 18 not.,.uaranteed na to or completeness and the furnlshlng thereof IS not, nnd\tn1rer no Clrcumswnces 15 lob'e ns, n representn- oplnlOn are subject to change Without nohce Walston & Co, Inc, and OffIcers, Director'!, Stockholders nnd Employees ihereot. purcflllsc sell nnft may-'ave an mterest m the securities mentioned herem ThiS market letter IS mtended and presented mercly as a general. mformal on day to day market news an9 not as a complete analYSIS Addlhonal informatIOn With re'!pect to any sccuritle'! referred to herem WIll be . \\XJl f