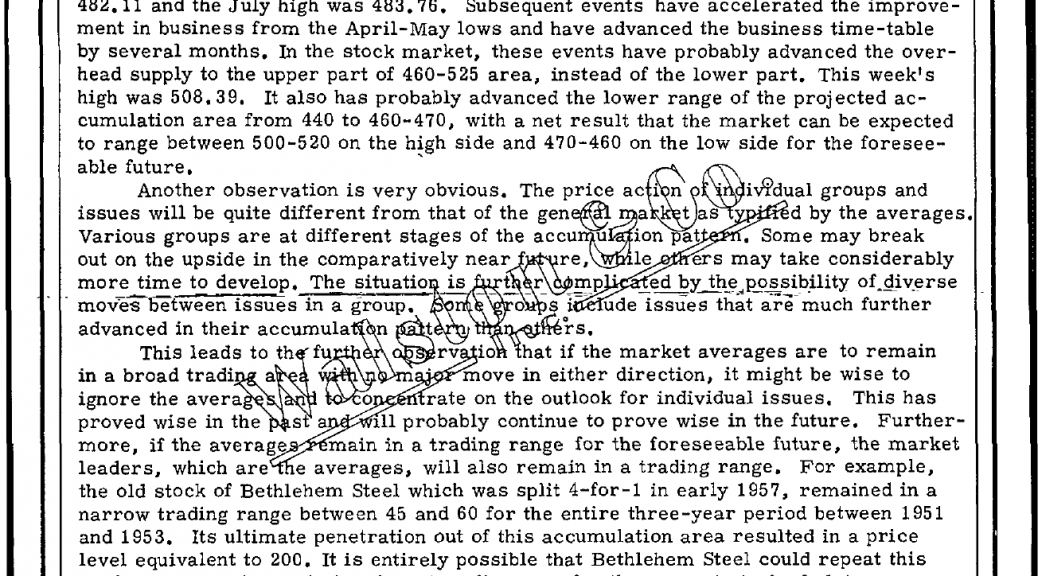 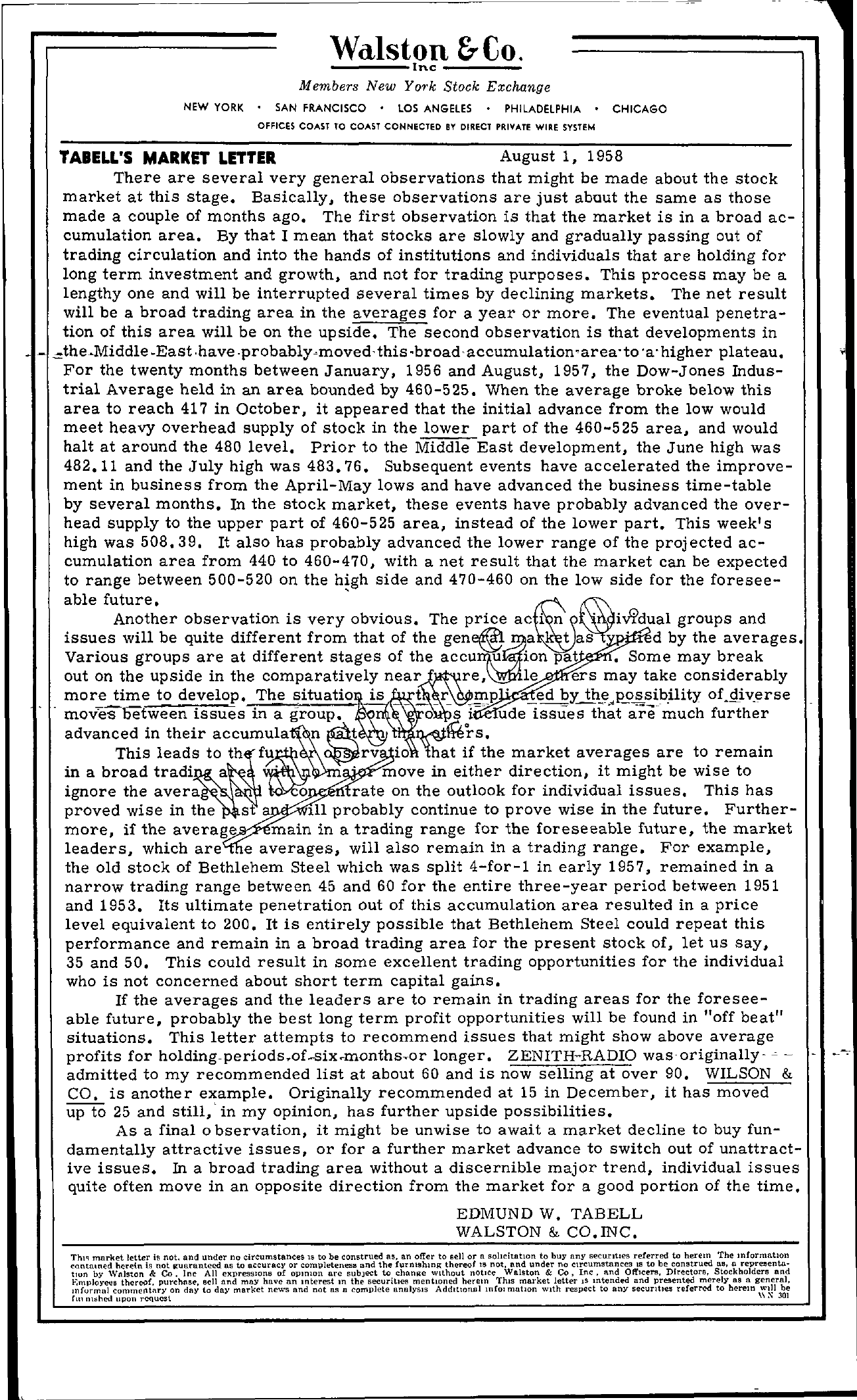 ,——————————————————————– NEW YORK Walston &CO. Inc Members New York Stock Exchange SAN FRANCISCO lOS ANGELES PHILADELPHIA' OFFICES COAST TO COAST CONNECTED BY DIRECT PRIVATE WIRE SYSTEM CHICAGO TABELL'S MARKET LETTER August 1, 1958 There are several very general observations that might be made about the stock market at this stage. Basically, these observations are just abuut the same as those made a couple of months ago. The first observation is that the market is in a broad ac- cumulation area. By that I mean that stocks are slowly and gradually passing out of trading circulation and into the hands of institutions and individuals that are holding for long term investment and growth, and not for trading purposes. This process may be a lengthy one and will be interrupted several times by declining markets. The net result will be a broad trading area in the averages for a year or more. The eventual penetra- tion of this area will be on the upside. The second observation is that developments in – -East have -probablymoved-this -broad-accumulation-area-to 'a'higher plateau. For the twenty months between January, 1956 and August, 1957, the Dow-Jones Indus- trial Average held in an area bounded by 460-525. When the average broke below this area to reach 417 in October, it appeared that the initial advance from the low would meet heavy overhead supply of stock in the lower part of the 460-525 area, and would halt at around the 480 level. Prior to the Middle East development, the June high was 482.11 and the July high was 483.76. Subsequent events have accelerated the improve- ment in business from the April-May lows and have advanced the business time-table by several months. In the stock market, these events have probably advanced the over- head supply to the upper part of 460-525 area, instead of the lower part. This week's high was 508.39. It also has probably advanced the lower range of the projected ac- cumulation area from 440 to 460-470, with a net result that the market can be expected to range between 500-520 on the high side and 470-460 on the low side for the foresee- able future. ' Another observation is very obvious. The price ac 1 n . ivtdual groups and issues will be quite different from that of the gen1Ja j t as by the averages. Various groups are at different stages of the accu u ion pat Some may break out on the upside in the comparatively Ie ers may take considerably m'tin to dov,'op. Th' moves oetween issues in a group. c,p' 'd oCd',,' 0 s i ude issues that are much further advanced in their This th f E in a broad tradi a ' rv io t'that if the market averages are to remain . move in either direction, it might be wise to ignore the avera on the outlook for individual issues. This has proved wise in the st …. 111 probably continue to prove wise in the future. Further- more, if the average main in a trading range for the foreseeable future, the market leaders, which are e averages, will also remain in a trading range. For example, the old stock of Bethlehem Steel which was split 4-for-1 in early 1957, remained in a narrow trading range between 45 and 60 for the entire three-year period between 1951 and 1953. Its ultimate penetration out of this accumulation area resulted in a price level equivalent to 200. It is entirely possible that Bethlehem Steel could repeat this performance and remain in a broad trading area for the present stock of, let us say, 35 and 50. This could result in some excellent trading opportunities for the individual who is not concerned about short term capital gains. If the averages and the leaders are to remain in trading areas for the foresee- able future, probably the best long term profit opportunities will be found in off beat situations. This letter attempts to recommend issues that might show above average profits for holding-periods.of..sixcmonthsyor longer. ZENITH-RADIO was-originally- – . admitted to my recommended list at about 60 and is now selling at over 90. WILSON & CO. is another example. Originally recommended at 15 in December, it has moved up to 25 and still,' in my opinion, has further upside possibilities. As a final 0 bservation, it might be unwise to await a market decline to buy fun- damentally attractive issues, or for a further market advance to switch out of unattract- ive issues. In a broad trading area without a discernible major trend, individual issues quite often move in an opposite direction from the market for a good portion of the time. EDMUND W. TABELL WALSTON & CO. INC. market letter is not, and under no circumstances IS to be construed as, an offer to sell or n solicitatIOn to buy any securitIes referred to herem The mformatlOn contum(!d hetdn is not guaranteed as to accuracy or completeness and the furnishing thereof IS not, and under no cirCumstances IS to be construed as, a twn by \Valston & Co. Inc All expreSSIons of OpinIOn are subJect to chanRc Without notIce Walston & Co, Inc, and OffIcers, Directors, Stockholders and Employees thereof. purchase, sell and may have an mterest m the securitIes mentioned herein ThiS market letter IS mtended and presented merely as a general, mfurmnl commcr\tary on day to day market news and not as a complete analySIS AdditIOnal mfOlmahon With respect to any securitIes referred to herein WI!! be upon request \\-; 301