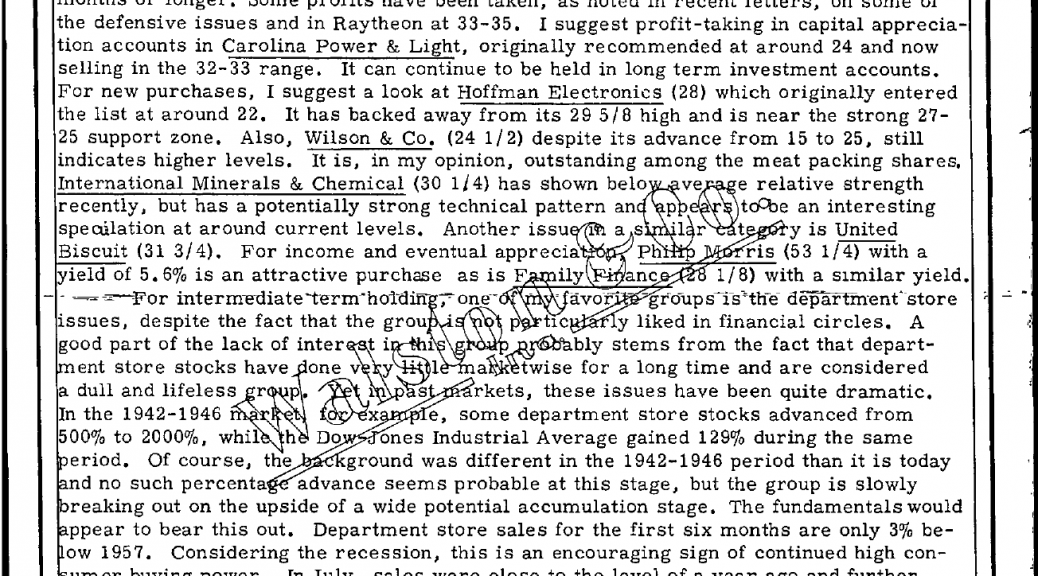 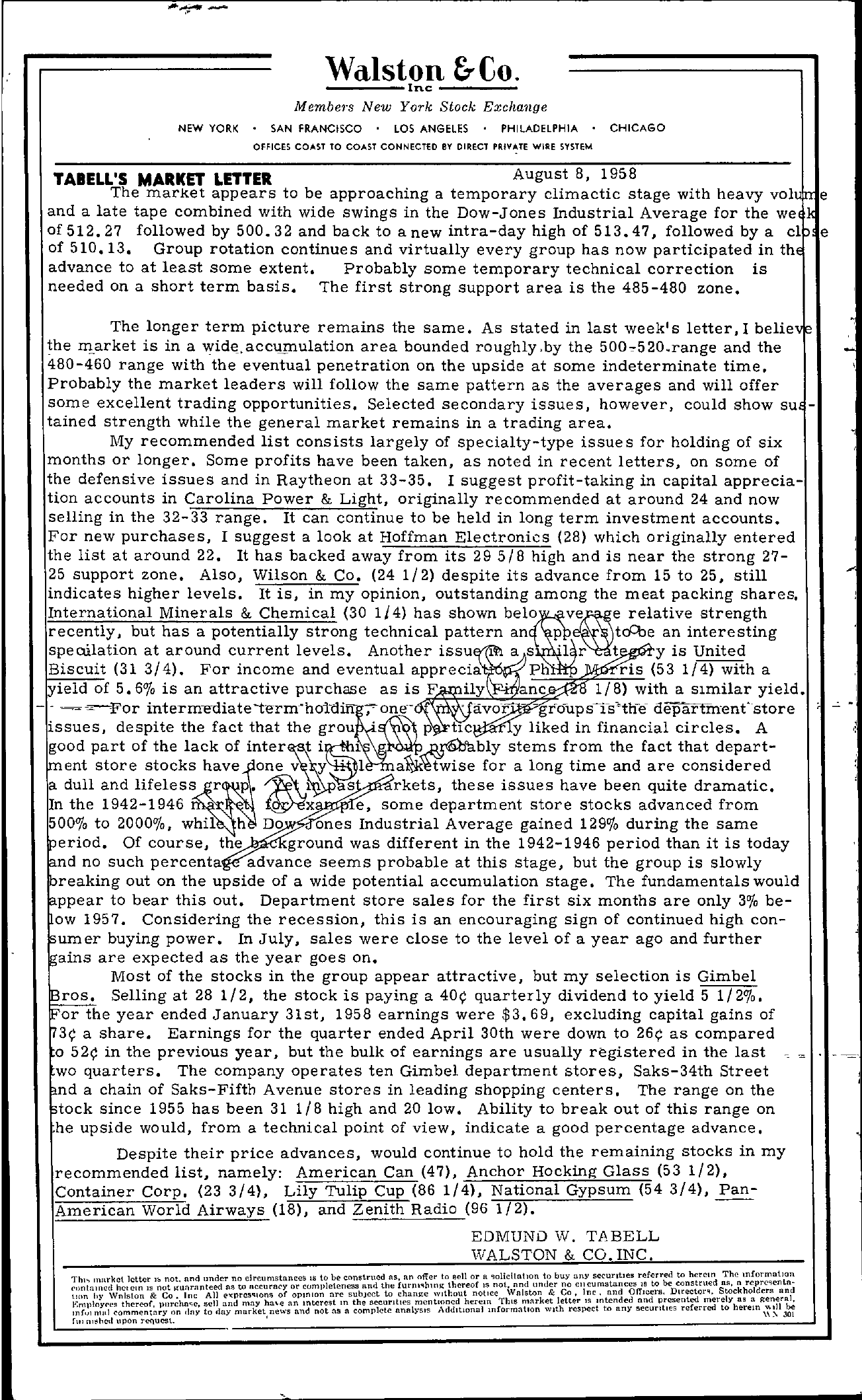 Wdlston &Co. Inc Membej's New York Stock Exchange NEW YORK SAN FRANCISCO ' LOS ANGELES ' PHILADELPHIA OffiCES COAST TO COAST CONNECTED BY DIRECT PRIVATE WIRE SYSTEM CHICAGO TABELL'S MARKET LETTER August B, 195B The market appears to be approaching a temporary climactic stage with heavy vol and a late tape combined with wide swings in the Dow-Jones Industrial Average for the we of 512. 27 followed by 500.32 and back to a new intra-day high of 513.47, followed by a cl of 510.13. Group rotation continues and virtually every group has now participated in th advance to at least some extent. Probably some temporary technical correction is needed on a short term basis. The first strong support area is the 4B5-4BO zone. The longer term picture remains the same. As stated in last week's letter, I belie the market is in a wide,accILmulation area bounded roughly.by the 500-520.range and the 4BO-460 range with the eventual penetration on the upside at some indeterminate time. Probably the market leaders will follow the same pattern as the averages and will offer some excellent trading opportunities. Selected secondary issues, however, could show su – tained strength while the general market remains in a trading area. My recommended list consists largely of specialty-type issue s for holding of six months or longer. Some profits have been taken, as noted in recent letters, on some of the defensive issues and in Raytheon at 33-35. I suggest profit-taking in capital apprecia- tion accounts in Carolina Power & Light, originally recommended at around 24 and now selling in the 32-33 range. It can continue to be held in long term investment accounts. For new purchases, I suggest a look at Hoffman Electronics (2B) which originally entered the list at around 22. It has backed away from its 29 5/B high and is near the strong 27- 25 support zone. Also, Wilson & Co. (241/2) despite its advance from 15 to 25, still indicates higher levels. It is, in my opinion, outstanding among the meat packing shares. International Minerals & Chemical (30 1'4) has shown recently, but has a potentially strong technical pattern an p relative strength toCbe an interesting speoilation at around current levels. Another issu l a s '1 r t y is United Biscuit (31 3/4). For income and eventual apprecia Ph' , ris (53 1/4) with a yield of 5.60/0 is an attractive purchase as is F ily anc l/B) with a slmilar yield. – — Foe issues, despite the fact that the grou . avoe -g,oup'''''' d'poctm,nt 0, p hc y liked in financial circles. A good part of the lack of ..!l.lcli)jably stems from the fact that depart- ent store stocks have one v y '1 for a long time and are considered a dull and lifeless r p. I S rkets, these issues have been quite dramatic. In the 1942-1946 e, some department store stocks advanced from 5000/0 to 20000/0, whil h Do ones Industrial Average gained 1290/0 during the same eriod. Of course, the ground was different in the 1942-1946 period than it is today nd no such percenta advance seems probable at this stage, but the group is slowly reaking out on the upside of a wide potential accumulation stage. The fundamentals would ppear to bear this out. Department store sales for the first six months are only 30/0 be- ow 1957. Considering the recession, this is an encouraging sign of continued high con- urn er buying power. In July, sales were close to the level of a year ago and further ains are expected as the year goes on. Most of the stocks in the group appear attractive, but my selection is Gimbel ros. Selling at 2B 1/2, the stock is paying a 40 quarterly dividend to yield 5 1/20/0. or the year ended January 31st, 195B earnings were 3.69, excluding capital gains of 3 a share. Earnings for the quarter ended April 30th were down to 26 as compared o 52 in the previous year, but the bulk of earnings are usually registered in the last wo quarters. The company operates ten Gimbel department stores, Saks-34th Street nd a chain of Saks-Fifth Avenue stores in leading shopping centers. The range on the tock since 1955 has been 31 1/ B high and 20 low. Ability to break out of this range on he upside would, from a technical point of view, indicate a good percentage advance. Despite their price advances, would continue to hold the remaining stocks in my recommended list, namely American Can (47), Anchor Hocking Glass (53 1/2), Container Corp. (233/4), Lily Tulip Cup (B6 1/4), National Gypsum (54 3/4), PanAmerican World Airways (18), and Zenith Radio (96 1/2). EDMUND W. TABELL WALSTON & CO. INC. Thl market letter I!, not und under no circumstances IS to be construed as, nn offer to sell or a 'lolicitnhon to buy Dny sc('untles referred to herein Th(! mformntJton hctctn IS not flS to uccurn('y or completeness fLnn the furnl,;hlnlol; thereof IS not. and under eM to twn h' \Vnh;ton & Co Inc All of OPinIOn are subJcct to chan!!e WIthout not ICC \Vnlston & o. nc. nn Icers. Ifec Ofq. c O l F 1 I'I'S thereof on fill Olllhcd lIPon request. sell and may ha.. e an Interest m the securIties mentIOned herem 'ThiS mnrket letter IS Intended and l)resented merely as a generix; . .to day market news and not as a complete nnalysls AdditIOnal mformatlOn With respect to any seCllfltJes referred to herein 301