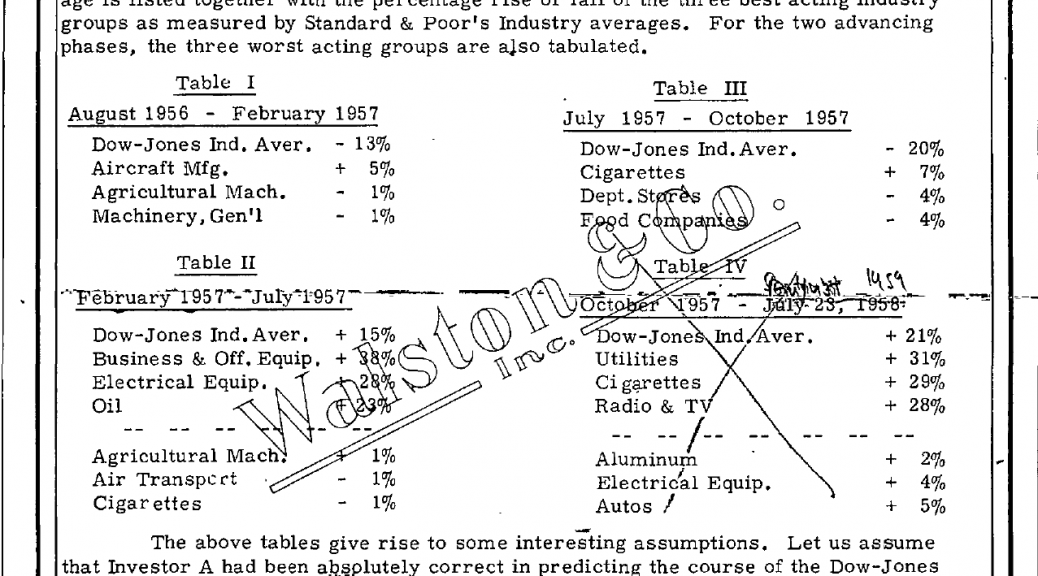 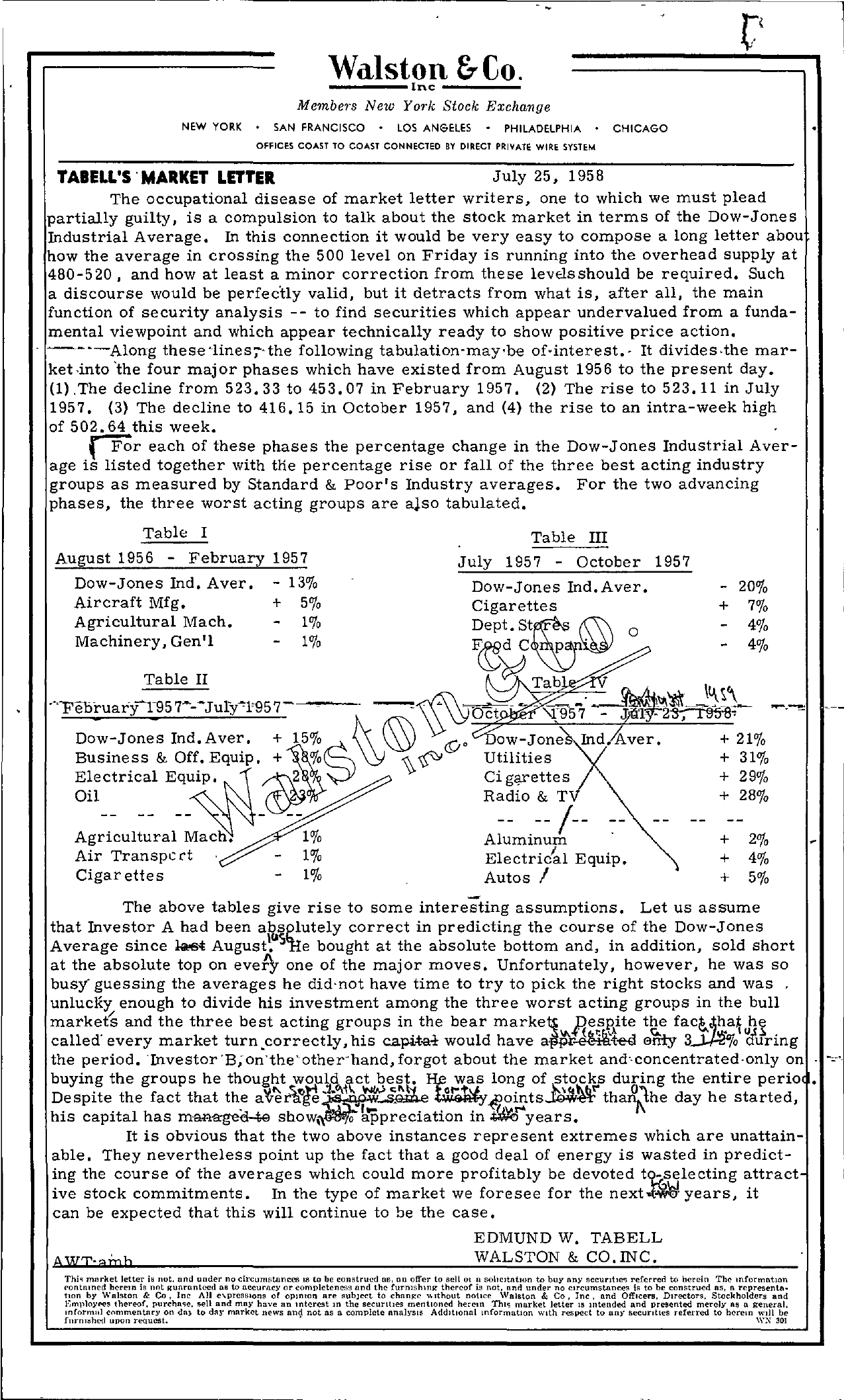 NEW YORK Walston &Co. —–Inc —– Membe.-s New York Stock Exchange SAN FRANCISCO LOS ANGELES PHILADELPHIA OFFICES COAST TO COAST CONNECTED BY DIRECT PRIVATE WIRE SYSTEM CHICAGO TABELL'S'MARKET LETTER July 25, 1958 The occupational disease of market letter writers, one to which we must plead partially guilty, is a compulsion to talk about the stock market in terms of the Dow-Jones Industrial Average. In this connection it would be very easy to compose a long letter abou how the average in crossing the 500 level on Friday is running into the overhead supply at 480-520, and how at least a minor correction from these levEls should be required. Such a discourse would be perfectly valid, but it detracts from what is, after all, the main function of security analysis — to find securities which appear undervalued from a funda- mental viewpoint and which appear technically ready to show positive price action. these lines;–the following tabulation-may'be ofinterest.- It divides,the mar- ket,into'the four major phases which have existed from August 1956 to the present day. (1) ,The decline from 523.33 to 453.07 in February 1957. (2) The rise to 523.11 in July 1957. (3) The decline to 416.15 in October 1957, and (4) the rise to an intra-week high of 502.64 this week. each of these phases the percentage change in the Dow-Jones Industrial Aver- age is listed together with tHe percentage rise or fall of the three best acting industry groups as measured by Standard & Poor's Industry averages. For the two advancing phases, the three worst acting groups are also tabulated. Table I August 1956 – February 1957 Dow-Jones Ind. Aver. Aircraft Mfg. Agricultural Mach. Machinery, Gen'l – 130/0 50/0 – 1 – 1 Table III July 1957 – October 1957 Dow-Jones Ind.Aver. Cigarettes – 20lo 7lo 4lo 4lo Table II . -J r -''1'957 J' euruary ' – u y l\- Do'-JOnes Ind. Aver. 150/0 Business & Off. Equip. BElectrical – \). yo ,\y ('Y Oil — — — – — Agricultural Mach. 1 Air Transpcrt – 10/0 Cigar ette s – 1lo 2 … J;957 – Jfti-r23-J!'l58 IndAwer.' 210/0 Utilities 310/0 Ci gqrettes 290/. –/–Radio & TV 28lo — — — — — Aluminum 2lo Electric!al Equip. Autos I 40/0 5lo The above tables give rise to some interesting assumptions. Let us assume that Investor A had been abiilllutely correct in predicting the course of the Dow-Jones Average since l;;tos.t bought at the absolute bottom and, in addition, sold short at the absolute top on evefy one of the major moves. Unfortunately, however, he was so busy' guessing the averages he did'not have time to try to pick the right stocks and was unlUCKY enough to divide his investment among the three worst acting groups in the bull marketS and the three best acting groups in the bear .. Resp,ite the hI called' every market turn ,correctly, his would have e'trty the period. -Investor 'B;on'the'other'hand, forgot about the market and–concentrated-only on -'- buyin,g the groups he lon.g the entire perio Desplte the fact that the ,.&omts 'et' day he started, his capital has m-a-l-agecl-4e in years. It is obvious that the two above instances represent extremes which are unattain- able. They nevertheless pOint up the fact that a good deal of energy is wasted in predict- ing the course of the averages which could more profitably be devoted attract- ive stock commitments. In the type of market we foresee for the it can be expected that this will continue to be the case. EDMUND W. TABELL WALSTON & CO.INC. market letter is not, and under no circumstances IS to be construed (lS, an offer to sell ot a sohcltntlOn to buy any aecuntlecJ referred to herein mformatiOn ('ontnmed is not gunranteed as to accuracy or completeness and the thereof is not, nnd under no ClrC\lmstances is to bc construed as, a representa han by WHiston & Co. Inc All epresslons of OPlmon arc subject to '\Ithout nOlice Walston & Co. Inc. and Officers. Directors. Stockholders and Empioy('Cs thereof, purchH'Ic. sell and mH)' have an Interest In the securities mentiOned herem Thl'l market letter 18 Intended and merely as a general. lnfnrmnl commentary on dH) to day market news Rlld not as a complete anah'sis AdditiOnal Information with respect to any securities referred to herein Will be fllrnlllh((1 upon r e q u e s t . ' 'YX 301