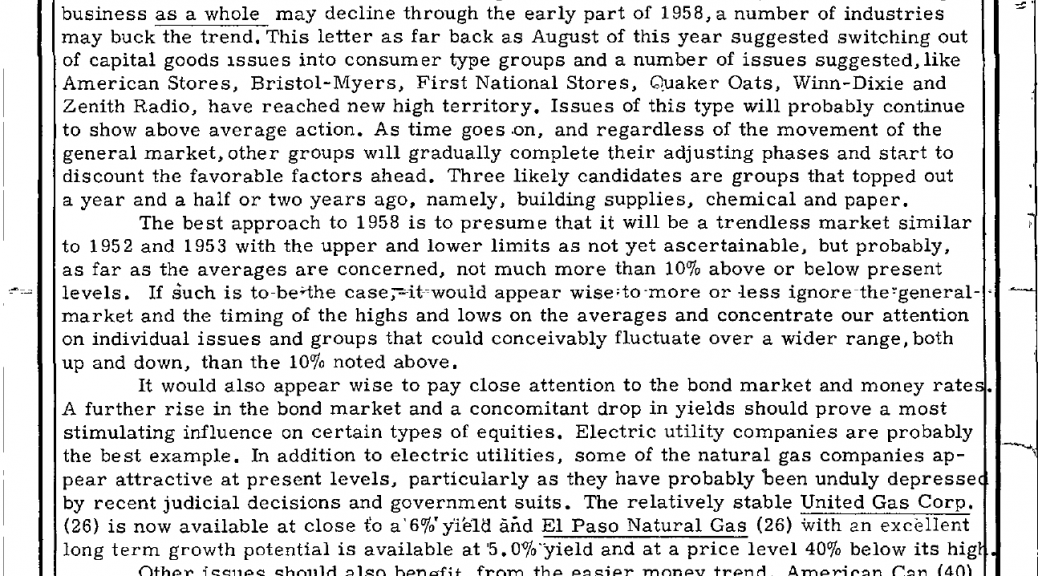 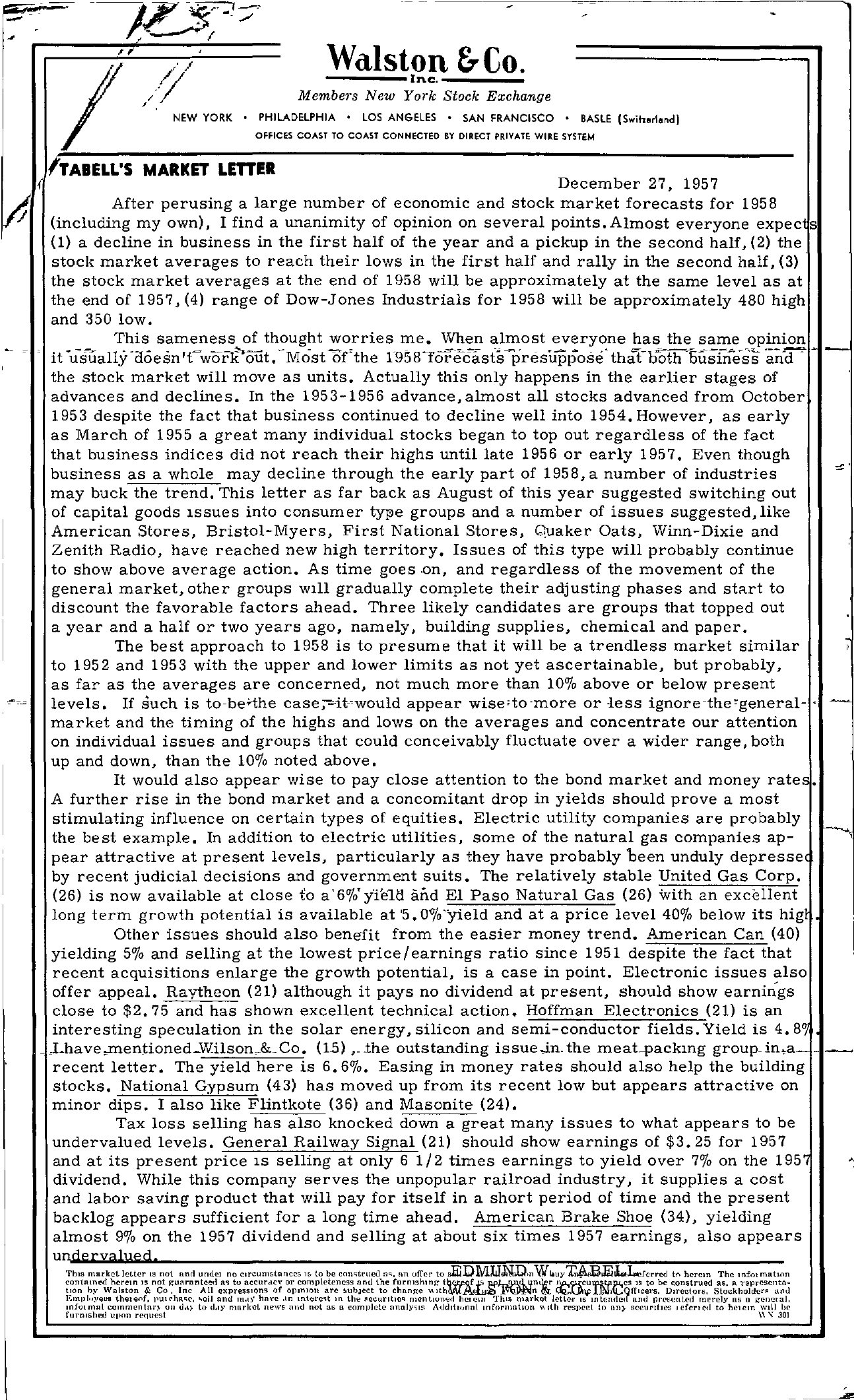 NEW YORK Walston &Co. ———Inc. MembeTs New York Stock Exchange PHILADELPHIA LOS ANGELES SAN FRANCISCO BASLE ISw;t,l.,d) OFFICES COAST TO COAST CONNECTED BY DIRECT PRIVATE WIRE SYSTEM IrABELL'S MARKET LETTER December 27, 1957 After perusing a large number of economic and stock market forecasts for 1958 (including my own), I find a unanimity of opinion on several points. Almost everyone expec s (1) a decline in business in the first half of the year and a pickup in the second half, (2) the stock market averages to reach their lows in the first half and rally in the second half, (3) the stock market averages at the end of 1958 will be approximately at the same level as at the end of 1957, (4) range of Dow-Jones Industrials for 1958 will be approximately 480 high and 350 low. This sameness of thought worries me. When almost everyone has the same opinion it 'usually-aoesn wof00ut. -Mostof'the presuppose' thatboth5usfriess 'an'-d . – the stock market will move as units. Actually this only happens in the earlier stages of advances and declines. In the 1953-1956 advance, almost all stocks advanced from October 1953 despite the fact that business continued to decline well into 1954. However, as early as March of 1955 a great many individual stocks began to top out regardless of the fact that business indices did not reach their highs until late 1956 or early 1957. Even though business as a whole may decline through the early part of 1958, a number of industries may buck the trend. This letter as far back as August of this year suggested switching out of capital goods 1ssues into consumer type groups and a number of issues suggested, like American Stores, Bristol-Myers, First National Stores, Quaker Oats, Winn-Dixie and Zenith Radio, have reached new high territory. Issues of this type will probably continue to show above average action. As time goes .on, and regardless of the movement of the general market, other groups w1ll gradually complete their adjusting phases and stftrt to discount the favorable factors ahead. Three likely candidates are groups that topped out a year and a half or two years ago, namely, building supplies, chemical and paper. The best approach to 1958 is to presume that it will be a trendless market similar to 1952 and 1953 with the upper and lower limits as not yet ascertainable, but probably, as far as the averages are concerned, not much more than 10 above or below present levels. If such is to-be;.the case;,-it–would appear wise'to-more or less ignore-the'general- market and the timing of the highs and lows on the averages and concentrate our attention on individual issues and groups that could conceivably fluctuate over a wider range, both up and down, than the 100/0 noted above. It would also appear wise to pay close attention to the bond market and money rate A further rise in the bond market and a concomitant drop in yields should prove a most stimulating influence on certain types of equities. Electric utility companies are probably the be st example. In addition to electric utilities, some of the natural gas companies ap- —-.., pear attractive at present levels, particularly as they have probably been unduly depresse by recent judicial decisions and government suits. The relatively stable United Gas Corp. (26) is now available at close to a'6'yieHI and EI Paso Natural Gas (26) with an excellent long term growth potential is available at '5.0 'yield and at a price level 40 below its hig Other issues should also benefit from the easier money trend. American Can (40) yielding 5 and selling at the lowest price / earnings ratio sinc e 1951 despite the fact that recent acquisitions enlarge the growth potential, is a case in point. Electronic issues also offer appeal. Raytheon (21) although it pays no dividend at present, should show earnings close to 2.75 and has shown excellent technical action. Hoffman Electronics (21) is an interesting speculation in the solar energy, silicon and semi-conductor fields. Yield is 4.8 ve ,.mentionedWilson& Co. (1.5) , .the outstanding issue ,.in. the meaLpackmg group . recent letter. The yield here is 6.6. Easing in money rates should also help the building stocks. National Gypsum (43) has moved up from its recent low but appears attractive on minor dips. I also like Flintkote (36) and Masonite (24). Tax loss selling has also knocked down a great many issues to what appears to be undervalued levels. General Railway Signal (21) should show earnings of 3.25 for 1957 and at its present price 1S selling at only 6 1/2 times earnings to yield over 7 on the 195 dividend. While this company serves the unpopular railroad industry, it supplies a cost and labor saving product that will pay for itself in a short period of time and the present backlog appears sufficient for a long time ahead. American Brake Shoe (34), yielding almost 9 on the 1957 dividend and selling at about six times 1957 earnings, also appears undervalued. TI1lS market letter IS not fl.nd uncle no clrcumstllncC's 15 to be 11. lin uffer to sEDMXJNIJ.nW tn herem The mfOl mation contfllned herem 15 not guaranteed no; to aCCUrdCY or completeness and the IS to be COllstrUed as, /I, represcntn- tlOn by Walston & Co, Inc All expreSSions of opInion arc to chan!)e (& UQ..,l..Jk\fl.b,\h\l..Qfflcers, Directors, StockholderI' and Emplyel'!I thelenf, and nM)' hnvc ,In In the mentIOned helcLlI ThiS market letter IS Inhnrielr and llrcscntcd merely as Ii gellelul. Illfolmnl commentnr. all dl) to d.I)' market news and not liS Ii complete Adlhtlnti Informntlon \\Ith respect \0 lin secuntles lcfcrled to hCleln Will be furnIshed Ul'on request \\ 30