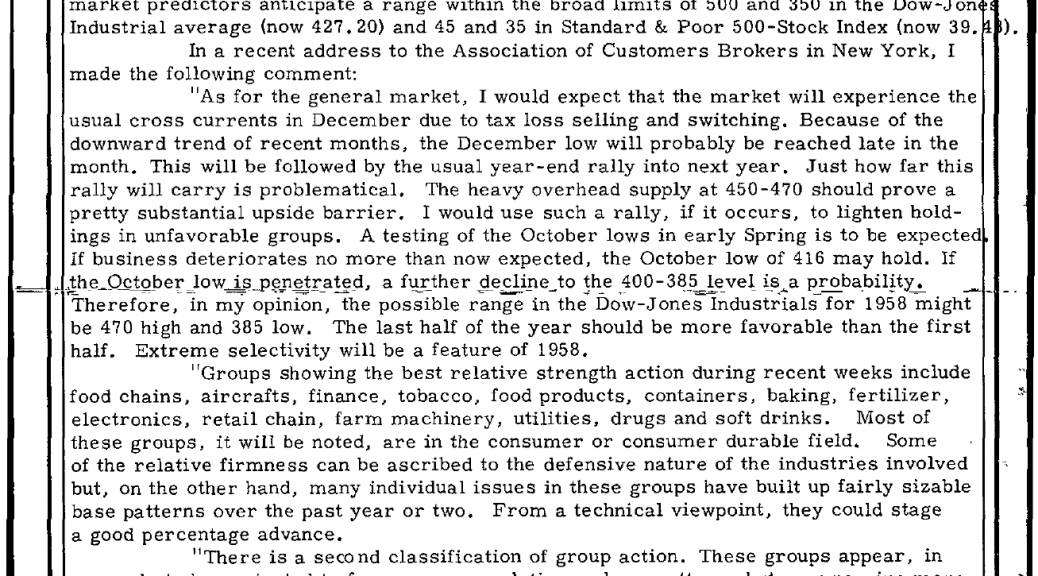 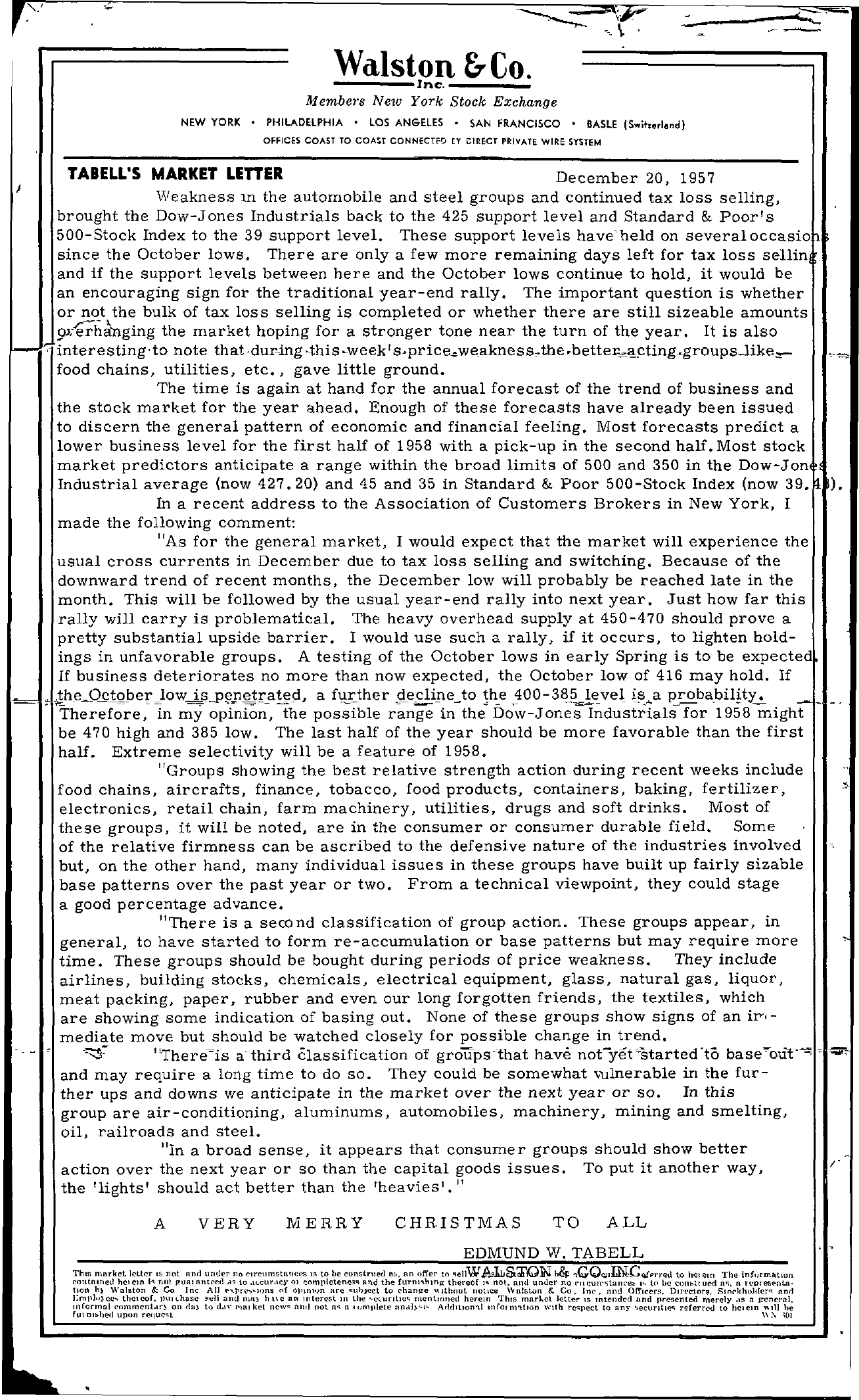 Walston——–Inc. &-Co-.—.–\'-;, Membe)-s New York Stock EXchange NEW YORK PHILADELPHIA LOS ANGELES SAN FRANCISCO BASLE (Sw;t,laod) OFFICES COAST TO COAST CONNECT.,!) EY iIRECT PRIVATE WIRE SYSTEM TABEll'S MARKET LEnER December 20, 1957 I Weakness In the automobile and steel groups and continued tax loss selling, brought the Dow-J ones Industrials back to the 425 support level and Standard & Poor's 500-Stock Index to the 39 support level. These support levels haveheld on severalocif) since the October lows. There are only a few more remaining days left for tax loss !'.,llin and if the support levels between here and the October lows continue to hold, it would be an encouraging sign for the traditional year-end rally. The important question is whether or not the bulk of tax loss selling is completed or whether there are still sizeable amounts 19J;–erhanging the market hoping for a stronger tone near the turn of the year. It is also '–interesting to note that dur-ing –this weaknessthe food chains, utilities, etc., gave little ground. The time is again at hand for the annual forecast of the trend of business and the stock market for the year ahead. Enough of these forecasts have already been issued to discern the general pattern of economic and financial feeling. Most forecasts predict a lower business level for the first half of 1958 with a pick-up in the second half. Most stock market predictors anticipate a range within the broad limits of 500 and 350 in the Dow-Jon Industrial average (now 427.20) and 45 and 35 in Standard & Poor 500-Stock Index (now 39. In a recent address to the Association of Customers Brokers in New York, I made the following comment As for the general market, I would expect that the market will experience the usual cross currents in December due to tax loss selling and switching. Because of the downward trend of recent months, the December low will probably be reached late in the month. This will be followed by the usual year-end rally into next year. Just how far this rally will carry is problematical. The heavy overhead supply at 450-470 should prove a pretty substantial upside barrier. I would use such a rally, if it occurs, to lighten hold- ings in unfavorable groups. A testing of the October lows in early Spring is to be expected If business deteriorates no more than now expected, the October low of 416 may hold. If a f'!.rther !he ,400-385..-level p.!obabil!ty. Therefore, in my opinion, the possible range in the Dow-Jones Industrials for 1958 might 1- be 470 high and 385 low. The last half of the year should be more favorable than the first half. Extreme selectivity will be a feature of 1958. Groups showing the best relative strength action during recent weeks include food chains, aircrafts, finance, tobacco, food products, containers, baking, fertilizer, electronics, retail chain, farm machinery, utilities, drugs and soft drinks. Most of these groups, it will be noted, are in the consumer or consumer durable field. Some of the relative firmness can be ascribed to the defensive nature of the industries involved but, on the other hand, many individual issues in these groups have built up fairly sizable base patterns over the past year or two. From a technical viewpoint, they could stage a good percentage advance. There is a seco nd classification of group action. These groups appear, in general, to have started to form re-accumulation or base patterns but may require more time. These groups should be bought during periods of price weakness. They include airlines, building stocks, chemicals, electrical equipment, glass, natural gas, liquor, meat packing, paper, rubber and even our long forgotten friends, the textiles, which are showing some indication of basing out. None of these groups show signs of an iyr,- mediate move but should be watched closely for possible change in trend. athird classification of groupsthat have base-out-I'I;,j and may require a long time to do so. They could be somewhat -.,ulnerable in the fur- ther ups and downs we anticipate in the market over the next year or so. In this group are air-conditioning, aluminums, automobiles, machinery, mining and smelting, oil, railroads and steel. In a broad sense, it appears that consumer groups should show better action over the next year or so than the capital goods issues. To put it another way, the 'lights' should act better than the 'heavies'. A VERY MERRY CHRISTMAS TO ALL EDMUND W. TABELL b&ThIS mnrkellcttcr IS not and under no Clrcumstnnce; IS to be construed al., an offer to to helctn The informntlOn cQntnllled hel eln not guaz ant,1 IS to .tLCl1r,uy 01 completenes'l llnd the furmo;hzng thereof 10; not, and under no I'll I to be conbl! UM a representa. tlon h \\'nlston & Co Inc All of OPlnUJn nrc to \Llthnut notIce Wnlston 8.. Co, In(', and OffIcers, DIrectors, and lmp,,ec-. thelcof, JulLhnsc sdl anu mn h\Le an lnterest In thl' mentIOned hereIn This mnrel letter IS Intended and presented merely .IS a general, Informnl 011 to ddV I'Jalkel new and not ao; n ,,,mlliete anli)q… ArldltlOn'll IIlfOlm'lhon wIth to any ,eellnlle; referred to hClelTl 11\ he flu 11))ln reqllco;t \\-. ,01